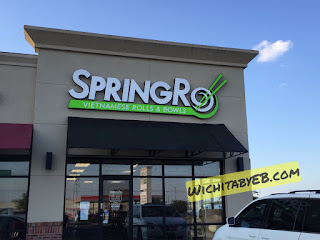 This weekend, a couple friends and I were fortunate enough to sample some of the items off of the SpringRo menu.

SpringRo is located at 6524 E 37th Street in the building that use to house Tsunami and will be open Monday – Saturday 11 am – 9 pm. SpringRo has an open layout. It’s much more open than the old Tusnami used to be. 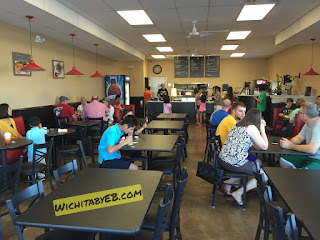 The concept and menu of SpringRo is very simple. It offers mainly Spring Rolls and Spring Bowls. A spring bowl is essentially a bowl of spring rolls but without the rice paper. So imagine everything that goes into a spring roll; that is what you’re eating out of a bowl. It’s the same concept as a burrito bowl but without the tortilla.

According to the owner in a recent interview, the concept is healthy, fresh and fast. With a limited menu of spring rolls, bowls and a few other items like egg rolls, wonton soup and drinks, it is all food that is quick and easy to make. They also feature a drive thru. 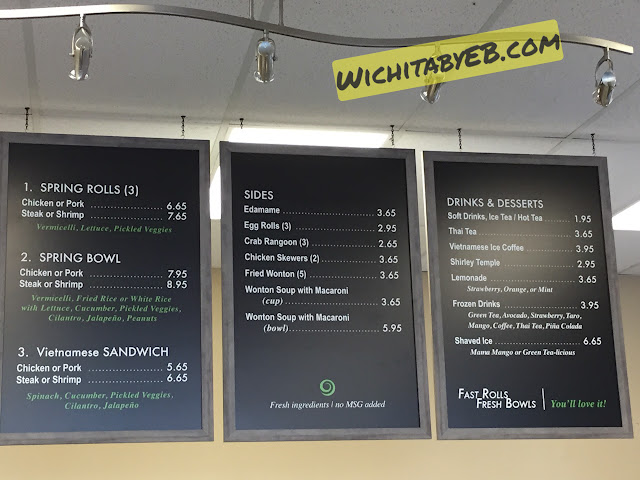 One our visit to SpringRo we were able to sample a wide selection of items. We tried the pork spring rolls, the steak spring rolls, a pork spring bowl, a steak Vietnamese Sandwich, crab rangoon and Wonton soup with macaroni. I also ordered a strawberry lemonade because it was 200 degrees outside and I wanted something refreshing to drink on top of water.

Everything is made fresh to order. Please keep in mind the pictures seen below will not be the presentation you get when SpringRo officially opens on Monday. The owner told me she’s really big into presentation so be on the lookout for that when you go after they open. We were just there to sample some items. 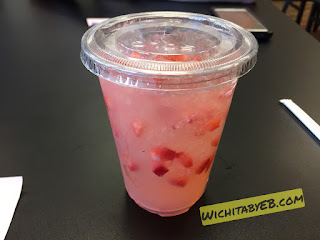 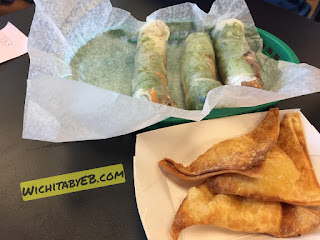 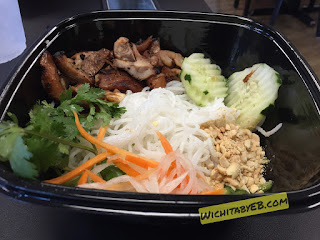 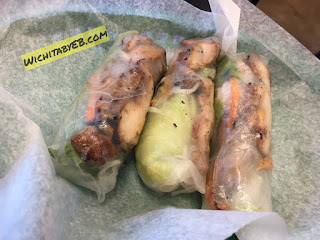 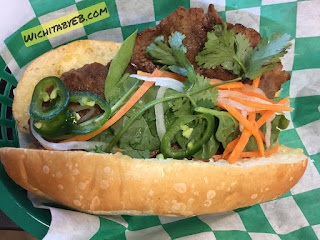 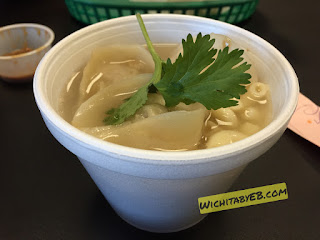 Two of my friends could not get enough of the crab rangoon. Both of them were gushing over how good they were with one friend saying it was one of the best in the city he’s ever had. The other friend liked it so much he had to use profanity in his comment because they were that ______ good. I told him I couldn’t print his comment in full as this is a family friendly blog. Just due to the cream cheese, I had to avoid eating the crab rangoon but they received the four thumbs ups from my friends.

Next up were the Spring Rolls. The Spring Rolls served are much bigger than what you get at many other Vietnamese restaurants. They were about 7-8 inches long unlike the small stubby ones you get. A basic serving of Spring Rolls at SpringRo is three which will be enough to fill most people up. All reviews by everybody were positive. One friend mentioned he wished the Spring Rolls included Thai Basil inside them but it wasn’t a big deal for me. It’s also important to note, that there are sides of Peanut Sauce, Hoisin Sauce and Fish Sauce set aside for dipping if you need that.

The steak Vietnamese Sandwich was next. While I didn’t try it, my friends both said they liked it especially if you included the fish sauce. They both love sandwiches in general and said it would be something they’d order again. If you try it, give it a whirl with the fish sauce.

The Wonton Soup with Macaroni was next. The soup was your basic broth with a very delicious serving of Wontons with Macroni. We all tried the Wontons and found them to be very tasty. My friend was glad they didn’t use cheap tasting meat inside their Wontons. He also said this would be something he could eat a lot of and could see himself eating this everyday when it gets cold. Along with the Wontons, the soup is filled with Macaroni which is a novel idea because in most Wonton Soup you get maybe 3 or 4 Wontons and then it’s just broth. At least now, the macaroni gives diners something more to fill up on. Great idea.

Lastly, I dined on a Spring Bowl with some Cherry Lemonade. I finished the Cherry Lemonade in seconds. I was either that thirsty or it was that good…….probably a mixture of both. It was interesting eating a Spring Bowl. I could remember the times watching my mom and my aunt sitting at the table making Spring Rolls at home while I sat there as a kid and just picked away at the noodles they had prepared in a bowl, sneaking a couple shrimp here and there, all this time I could have saved them time by putting it all in a bowl instead of having them make Spring Rolls. It’s a concept that sounds so simple I’m surprised it took this long to come to fruition. One of my friends wasn’t sure about the Spring Bowl but I was a fan of it. I can see how some people will prefer a Spring Roll over a Bowl or vice versa. They both have their benefits and ultimately the rice paper isn’t going to make much difference to the overall taste of the product.

We all left with very positive thoughts on SpringRo. The people who live and work in that area of town will be very excited when they are finally able to try out the product on Monday. I think SpringRo is going to be a winner if they can maintain great customer service, a good fresh product and stay consistent.

Be on the look out folks. SpringRo opens Monday, August 3rd at 11 am. Give this delicious Vietnamese food a try and let me know what you think! I’ll for sure be going back this week when they officially open.