It’s been years since the name Dana Altman was brought up in the same sentence pertaining to anything Wichita State. But Thursday night, Dana Altman and the Oregon Ducks defeated the Arizona Wildcats to make Wichita State the new owner of the nation’s longest active home court win streak at Charles Koch Arena.

It’s 42 straight victories for WSU. Just take a second to let that seep in. In your wildest dreams, would you have ever thought the Shockers would go to a Final Four, earn a #1 seed, have an undefeated season, have the National Coach of the Year and own the Nation’s longest home win streak all within a five year span? That’s crazy!

For Coach Marshall and the players, it is just business as usual but for the fans it’s something even more special. As fans, we may not have the greatest, rowdiest or creative student section; we may not stand for 40 minutes; we may boo occasionally at John Higgins; but we are some of the most passionate and knowledgeable fans in the country. A fan base that travels well and supports their school just as good as any other program.

Through these past 42 games in which the Shocker beat 28 different teams, we’ve seen a good number of blowouts but mixed in there were some special moments; moments that have stuck out in my mind and will probably remember forever. Certainly not all the biggest names enter the halls of Charles Koch Arena but let’s face it. How many big names are willing to come here to play?

Admittedly, I have not been to all 42 games. In that span, I believe I missed one game which coincidentally was an Emporia State game. But five games certainly stick out in my mind and I just happen to still have pictures to most of those games saved in my phone. 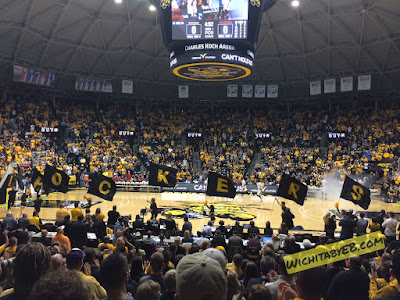 Western Kentucky was coming off of back to back NCAA Tournament appearances. But that’s not what made this game special. ESPN was airing this game during their 24 hour tip-off marathon and what time was this game at? Midnight. Yep, the game started at midnight.

I remember chatting back and forth with all sorts of friends trying to figure out our game plan for the night and ended up at a local college favorite, The Field House for pre-game drinks and then making our way over at 11:30 pm. The game didn’t even end until 2:09 am.

Energy drinks were handed out before the game to help keep people awake. But it didn’t end there; what made the game most memorable for me was it was the first regular season game after our Final Four. Hopes were so high. Questions were being asked whether the Shockers would lose a game that season. And of course, the Final four banner was dropped. 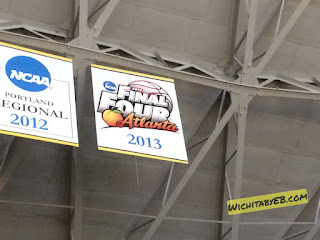 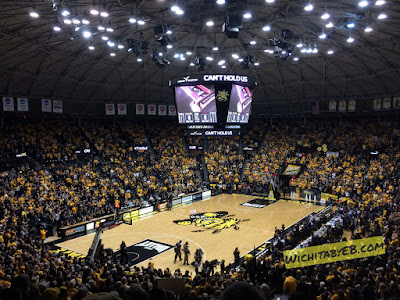 That question of whether the Shockers would lose a game that season would be answered on March 1st. The Shockers entered the final game of the regular season with an unblemished 30-0 record.

After defeating opponents all season long by a good margin, fans were still a bit concerned going into the game. This Missouri State team was the same squad that took the Shockers to overtime in Springfield. I remember being in Springfield for the game; I’ve never been heckled so much as a fan at any other game.

So with that on the Shockers minds as well as being snubbed for a shot at a Gameday appearance, the Shox manhandled the Bears and cruised to a 23 point win.

It was also a sad day as it would be the last time, fans would be able to see Chadrack Lufile, Nick Wiggins, Kadeem Coleby and especially Cleanthony Early don a Shocker uniform at Charles Koch Arena.

Oh yeah, Bobby Knight stopped by for the game…….. 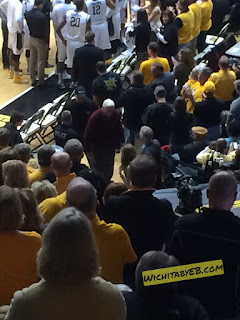 Who remembers Dick Vitale calling a Shocker game! IT’S DICK VITALE BABYYYYYYYYYY!!! I heard that Dick Vitale gets to choose which games he calls so for him to choose Wichita State meant something special.

Of the 42 games on the home win streak, there was no game closer than the Alabama game. Spoiler, we won by one point.

What made that game so special was we were down eleven points with 5½ remaining and never game up. The team was so resilient and behind a full court press, couple late buckets by Rashard Kelly and a monster dunk by Darius Carter with twelve second left in the game the Shockers came away with the victory.

Of course fans were worried at the end when the Crimson Tide had the final possession being down one with twelve seconds left. Fans have too many times experienced close losses at the end of games to know the game is never over. 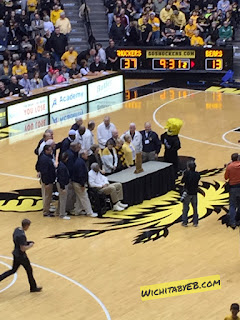 At halftime, fans were treated to a 50th anniversary of the 1965 Final Four team. It was great to see some of the old guard back like Dave Stallworth, Mohamed Shariff (Kelly Pete), Bob Powers and others return back to be celebrated. Even though these were guys before my time, sports fans always respect tradition and past success.

But is that all that made this game special? Certainly not. What made me remember this game was 10/10/11. I’m not talking about October 10th, 2011. I’m referring to 10 points, 10 rebounds and 11 assists by Fred VanVleet. The first triple double since Terry Benton in 1972.

I vividly remember being in my regular seats for the game and looking at our phones paying attention to the box score and seeing his stat line of 5 points, 8 rebounds and 8 assists at halftime continue to grow in the second half. He already had a double double with rebounds and assists before our section started yelling “SHOOT!!!!” each time Fred touched the ball. The moment he hit a three pointer to give him the triple double, it was high fives all around in our beloved section of 124. 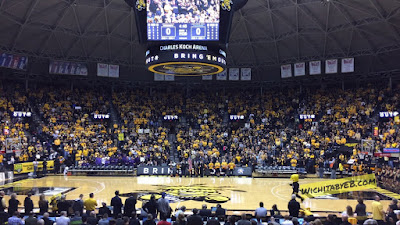 After being snubbed for Gameday a year before, ESPN got to their senses and made the trek to a snowy Wichita for a battle of #10 vs. #11.

A month before that game, Northern Iowa throttled Wichita State at Cedar Falls. This was the rematch and for the Regular Season Conference Title……and the eyes of the sports world were watching.

Gameday before the actual game was a truly fun experience. Fans waited in line for a while in the falling snow just to get inside. As fun as all that was, it didn’t compare to the actual game. What many fans thought would be a close game turned into a runaway 14 point win for the Shockers.

Gregg Marshall was quote by ESPN as saying: “Combined with ‘College GameDay’ being here, a top-10 opponent, playing for a championship, I’ve coached 17 years and this is the biggest regular-season home game I’ve ever had, Our team responded. And our fans responded. It was electric.”

The game was also Senior Day for Darius Carter and Tekele Cotton. One of those players made sure to leave an impression on fans for his final game. Just watch………..