I’m on a goal to try one restaurant I have never had before once a week for the next four months. Via the Wichita By E.B. Facebook page, suggestions have been pouring in via comments and messages on places to try.

First up is a place many of you I’m betting haven’t ever been to before or ever heard of. It’s Teriyaki House at 1845 S Rock Road. It’s located off of Rock Road just south of Harry.

They are open Monday – Saturday 10:30 am – 8 pm and on Sunday from 11 am – 3 pm. For their menu along with a gallery of pictures, check out their website: http://www.teriyakihousewichita.com/

As most of you have probably guessed by now, Teriyaki House deals with mainly Japanese food with their specialty being Teriyaki bowls. One thing Teriyaki House prides themselves on is their “”No MSG. No Trans Fat. No Skin. No Frying”.

On my visit there, I was just getting back into town from vacation and hadn’t eaten for hours so a bowl wasn’t going to be enough to satisfy my appetite. I opted for a Chicken and Steak Plate with brown rice. The plate options come with a small side salad and a chicken Gyoza which is stuffed chicken in a wonton skin, grilled and served with sweet homemade sauce.

While glancing through their menu, they had a variety of other options including soup so I ordered their Tom Yum Chicken soup at a medium spiciness level. 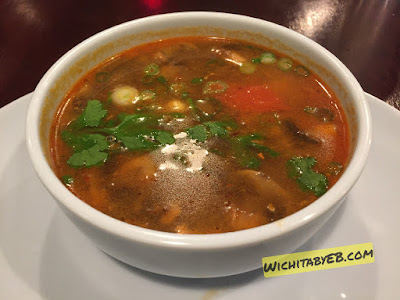 The soup was delicious. The broth alone was about as good as any other Tom Yum Chicken soup I’ve had in town. There were nice chunks of chicken, mushroom and tomatoes spread out through the soup to give some substance to it. It wasn’t all that spicy so I’m interested in going back to it and kicking up the spiciness level. 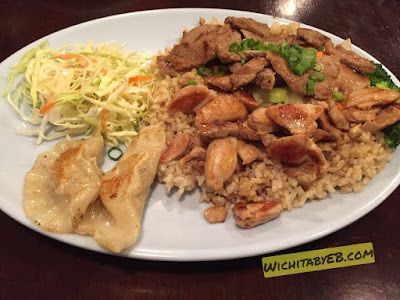 For the main course, the included side salad was a good start to the meal with the Dijon Honey Mustard dressing giving it a nice zing and difference of flavor from the soup I just had. The chicken Gyozas are amazing. In the past I’ve had fried Gyozas and the grilled version at Teriyaki House are ten times better. It has a cleaner taste to it if that is such a thing and I didn’t even bother with the homemade sauce. The actual Chicken and Steak Teriyaki was not greasy compared to other places I’ve tried before. While both chunks of chicken and steak were of good size the steak was quite dry while the chicken was fine. Halfway through my meal, I found myself getting full. The picture doesn’t do it justice on just how big the plate of food is. It’s a lot and maybe I should have just gone with a bowl since I had the soup as well.

For the price of Teriyaki House, it’s just as good as many “fast food” style Japanese restaurants in town. But at that price, you’re also getting a healthier version that isn’t so greasy. I’d certainly go again in the future.

Give it a try yourself and let me know what you think.

What to expect at Fred & Barney’s restaurant

First Look at the new Asia One location