It’s amazing the businesses located in Wichita that you never ever know about. After reviewing Wichita Room Escape, I was informed that there was a competitor in town.

That competitor is Key Quest Escape Room Wichita which is located inside the Laser Quest building at 2120 N Woodlawn inside Brittany Center.

From talking with the employees at Laser Quest, Key Quest Escape Room Wichita has been around since July of 2015.

Reservations are as simple as calling their number 316-652-9500 to schedule the time you’d like to go in. They are open Tuesday – Sunday and you do not have to pay in advance. You’ll pay when you arrive but there is a $50 deposit required.

The cost is $15 per person and the challenge last for 45 minutes. Each challenge requires a minimum of 3 people and a maximum of 6 people. When you make your reservation, you’ll be asked which of the two quests you would like to do. Currently they have two options, The Cellar and Vacation Vandals.

All the information for Key Quest Escape Room Wichita can be found here.

I set a reservation for four on our trip to Key Quest and requested the harder of the two rooms. I was told Vacation Vandals was the way to go with under a 20% success rate. After being unable to get out at Wichita Room Escape, I was determined to avenge that disappointing failure.

The employee told us that cell phones were not allowed inside the room so we had to put our phones inside of a locker. Putting my phone away in a locker was akin to a parent sending their child off to school for the first time.

The employee then explained to us the rules of the room. It was very hard to hear as you’re being told these rules in the main area of Laser Quest where there were a dozen kids running around yelling and cheering. The basic rules from what we gathered were similar to their competitor. No tearing down stuff that’s bolted down, No climbing on things.

You are allowed to ask for help one time once you’re locked inside the room.

Once inside the room, the game begins. There’s a timer to let you know how much time is left.

I won’t go through the quest at all, that’s for you to experience yourself.

But what did we think once the 45 minutes were up?

For starters, we failed………….again. We were told we completed about 85% of the challenge which was pretty good compared to others. What she probably wanted to say was “You guys are idiots.”

As a group, we were amazed at how much harder this escape room experience was than Wichita Room Escape. The puzzle was really tough. I even asked if anybody ever made it through and the staffer said, “I do know one group that did. It was the Wichita State University Nerd Group.” Our jaws dropped…….yes there is such a thing. Check out their Facebook Page. Kudos to the WSU Nerd Union though, we applaud them for successfully escaping the Vacation Vandals Escape Room.

As for the production value, it’s much different compared to Wichita Room Escape. If you get claustrophobic this might not be for you. The room is very small and dimly lit. It can be hard to see in there and gets pretty tight with the more people you have. The room is an all purpose room meaning, they use that room for both quests and just change things in and out. On top of that, you can hear people out in the main lobby area. Occasionally while stuck inside, we could hear kids yelling non-stop along with knocking on our door. That could be a nuisance for some people trying to focus and think on the task at hand.

At 45 minutes, we felt that an hour would have been the good sweet spot for the amount of time needed to figure out the puzzle. But at the pace we were at, we still likely would have failed at an hour. The employee even told us they were considering bumping it up to an hour.

Regardless the puzzle was still pretty fun and just another fun option of something to do in Wichita. Because the escape room businesses in Wichita are limited with the number of puzzles they have. If you have completed say both of the rooms at Wichita Room Escape, this is another option for you to try if you love this sort of experience.

It’s very likely we will be going back to give the final room a crack………where we will also probably fail again.

Have you been to Key Quest Escape Room, we’d love to hear your thoughts on it.

I have also heard there is a Room Escape in Hutchinson so that could be next on the adventure list. 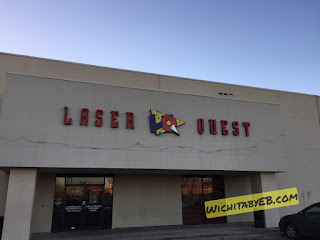 Creating our own ornaments via glassblowing at Karg Art Glass

A day of brunch, bingo, pickleball and ice skating at Chicken N Pickle