Pizza options on the west side of Wichita are pretty limited when compared to the east side of town. Some of the favorites in town like Ziggy’s Pizza, Picasso’s, Il Vicino, Angelo’s cannot be had west of the Delano District.

So what options are out there for West siders? My brothers and I made a stop by Avivo Brick Oven Pizzeria located in NewMarket Square at 2441 N Maize Rd #101.

As you can guess by their name, they are a brick oven pizzeria.

Their menu, hours and even capability to order online can be found at their website: http://www.avivobrickovenpizzawichita.com/

For starters, I went with a Insalata Cesare while one of my brothers went with the Pesto Portobello. Those items came out particularly fast. 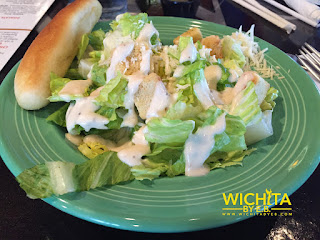 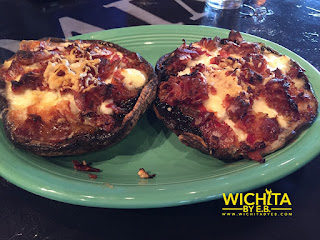 The salad wasn’t anything too special. It was your typical romaine lettuce with a few croutons, some parmesan cheese and a side of creamy Caesar dressing to pour over the lettuce. There wasn’t much to it. As for the portobello mushrooms, those things were huge and the picture don’t serve it justice. Covered with nice big chunks of bacon and stuffed with basil pesto, garlic, mozzarella and provolone cheese, it was almost like a meal in itself. For $6, my brother wouldn’t stop raving about them and how delicious it was. He would end up taking the second one home for his wife. 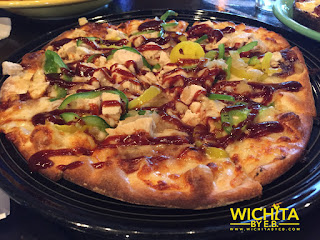 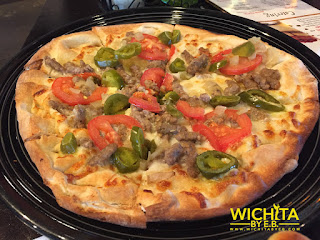 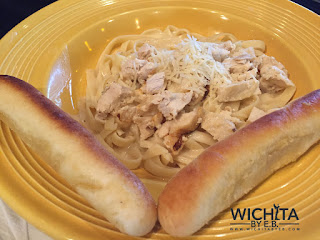 Let’s start with the pizzas. I ordered the Pizza Con Salsiccia at the recommendation of my server for something spicy. Outside of the jalapenos, there wasn’t really anything spicy to it and to make matters worse, there wasn’t much flavor to the pizza at all. I’m a huge fan of caramelized onions and I could barely taste the ones on my pizza. The crust wasn’t too bad; it had a nice good crisp to it but taste-wise it was missing a lot.

My brother felt the same regarding the crust to his BBQ Hot Link Pizza. Having just had the BBQ Pizza at Ken’s Pizza the previous week, he noted the BBQ sauce at Ken’s was better. He noted the pizza wasn’t that bad but he’s had better oven style pizzas like Il Vicino even though theirs is wood oven while Avivo is brick oven. He was more happy with his mushrooms than anything.

Lastly, the pasta was described as “bland”. There wasn’t much to the alfredo sauce. On the bright side, there were good size chicken chunks and the garlic bread was delicious; it had a nice garlic bite to it. The pasta would not be something he’d order again in the future.

Price-wise, everything was comparable to what you see at Il Vicino.

Service was great, happy and responsive.

The food was where Avivo didn’t match the competitors in town. Outside of the portobello mushrooms, everything else we ordered were misses.

Back to the west side Wichita drawing board for pizzas………..