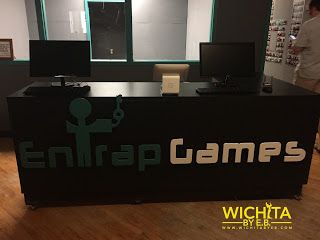 Another escape room in Wichita has just opened up over the weekend. It’s called Entrap Games – Wichita. They are a company that originated in Omaha, NE and now have a location in our great city of Wichita.

Located at 443 N Mosley in downtown Wichita, Entrap Games has openings on Thursday thru Sunday at their website.

The going rate is $30 per person but they do have discounts available.

If you follow their Facebook page, you’ll notice there is a 45% off discount code “Hello_Wichita”. Unfortunately when my group booked the room a month ago, we only got 25% off which was a little disappointing.

There’s also a Groupon for up to 46% off available here. Definitely look around while booking, $30 is the highest price for any Escape Room in Wichita so if you are able to get a discount or a promo code, save yourself some money.

Some other basics regarding Entrap Games. At the current moment, they only have one room available. It’s called Off Limits. The story behind Off Limits is as follows:

Your group of friends have been invited to an extravagant dinner party hosted by an eccentric co-worker, and have been given the run of the mansion, aside a single room, in which you were told to keep out of. Eventually, having looked about the rest of the premises, you all stumble towards the secret room. The door creaks open and the group steps inside. Moments later, the door shuts and locks! There doesn’t seem to be a way out – but surely there must be something! Items in the room reveal a dark side to the owner. Escape, before it’s too late!

The room is for up to 8 people. If you do not fill the room up, you could be paired with other players.

For my group’s outing, our team consisted of many friends and family that have joined me in previous escape rooms. Everybody had already done at least one other room. During the debriefing, we were told the same rules about not breaking items, etc and if we needed any clues to check in on Facebook and show the cameras or dance or do something outlandish and a clue would be given on the TV screen.

With that said, we had one hour to escape the room.

So how did we do? Well our streak of success continued and we escaped the room in 28 minutes and change. It was the fastest time the game operator has seen in his time running the Off Limits room between the time he worked at the Omaha and Wichita locations. To make it even sweeter, we did not use a single clue.

But what did we think of the game? We all had fun. This room had little bits of cool technology which everybody loved. Like Exits Escape Room, it was a good mix of how things were hidden with the use of technology. We all love the fun and camaraderie of escape rooms and this just played into that.

While we are all veterans of the escape rooms by now, I’ll go on record by saying it was the easiest of the rooms we’ve done. Our one issue without giving anything away was that the puzzles were pretty similar inside the room. Some different types of puzzles could have been used to differentiate how things were solved. Of course the success rate for this room is 58% so a lot of people have been escaping this room. I wonder how many of those got out without a clue.

Would we go back? Yes, the game operator you could tell was really into the whole escape game and was very uplifting and engaging with the customers. We were told the building has the capacity for future rooms in process but that would be much later down the pipeline.

Entrap Games “Off Limits” room is a good starter room for those trying out this type of fun for the first time. I’d recommend Entrap Games. I can honestly say I have never hated or disliked any experience in any of the escape rooms in town.