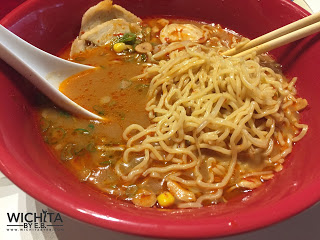 I was going to start this article by saying “This isn’t your momma’s ramen” but then realized the average readers’ mommas probably didn’t make ramen for you growing up.

So let’s restart this article…….

Every now and then something refreshing and new comes to Wichita that excites the appetites of many. It paves the way for so many other copycats and business owners to mimic and copy hoping for a quick buck off that next big thing.

Well the next big thing in Wichita could very well be RAMEN!

Yokohama Ramen Joint had a private opening to show off their delectable goodness. I was fortunate enough to attend. After five years of blogging, I’ve finally built up some real credibility to be invited to a restaurant’s private opening! My friends reading this are now hoping this all doesn’t go to my head.

Back to the Ramen though, I was joined at the private opening by a trusted foodie friend of mine who’s been in the restaurant industry for many years. He’s my trusted source for any time I have questions about food or restaurants in general.

Their doors opened at six and we were greeted by their smiling staff. Inside the narrow building is around a dozen tables, I didn’t count. I was too busy smelling the broth in the air. But if you look at the pictures, the seating is limited. 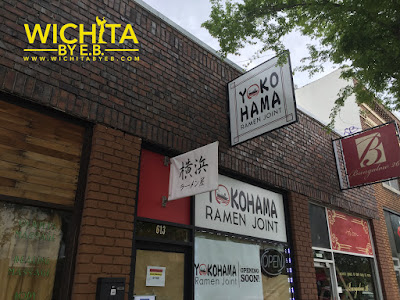 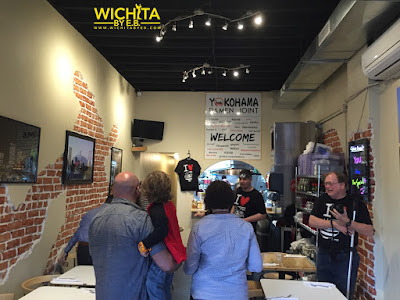 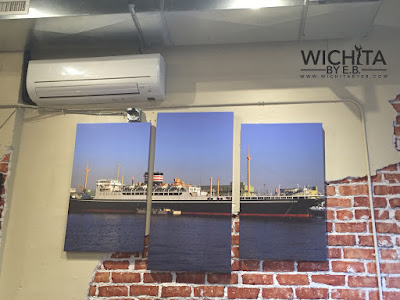 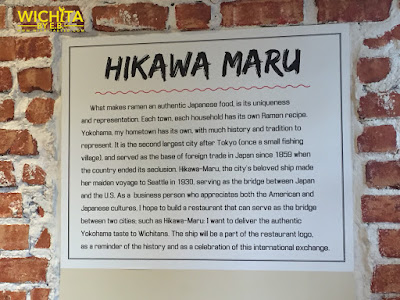 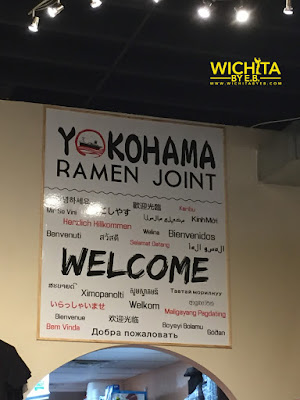 They have a simple menu all with descriptions of what each item is. It’s not one of those Asian restaurants where you’re left wondering exactly what it is you’re ordering. (click the menus to enlarge) 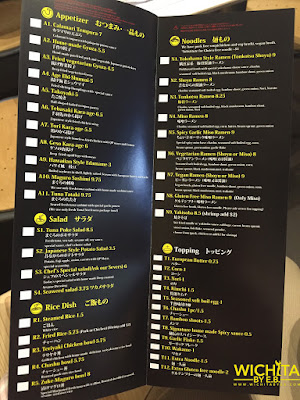 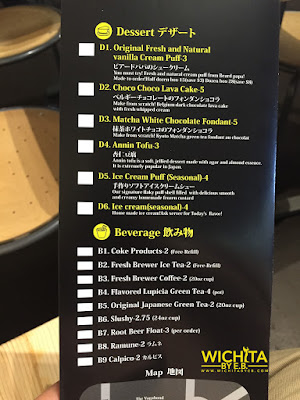 One thing everybody at the opening couldn’t get enough of was the employees shirts. I loved them and might have to buy one: 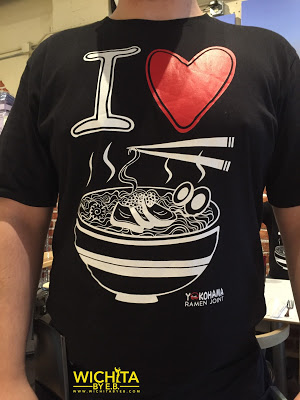 My friend noted their hospitality was top notch. It got him excited to see the passion the employees had for their product and it also came across in the food. More on that to come…..

We were given a list of options to try and we had about everything they had to offer for the evening. The menu items we had were: 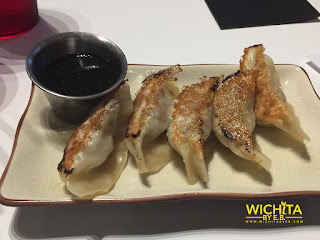 The Gyozas were amazing. My friend said they were right up there with the best he’s ever had in Wichita. It had a nice semi-crisp bottom but the rest was still silky and chewy at the same time. I don’t like completely fried Gyozas so these were on point. Dip them in with the soy sauce and you are in heaven. 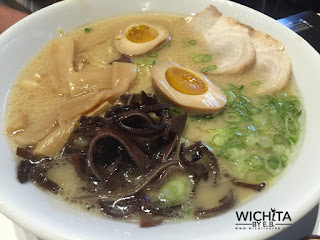 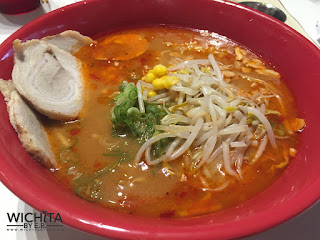 Next up was the Ramen. The pictures above were when it was brought to us and below was in action….. 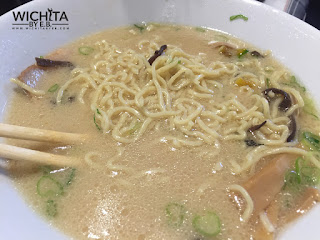 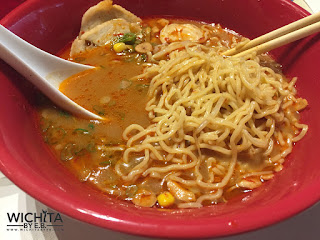 The white bowl was the Yokohama Style Ramen. My friend was happy when he saw the natural oils from the broth floating to the top. When he saw that, he knew it was going to be good. He quoted a chef he knew and said, “fat is flavor in a good way”. The broth was the star of the meal for him. You can’t really go wrong with noodles, so the broth can make or break the meal. I compare it to Pho. You can’t have good Pho without good broth, the same can be said about Ramen.

He went on to describe his Ramen as the ultimate comfort food…….comfort food to the max. It was rich and comfy and if his grandmother was Asian, this would be the soup she would make.

My Spicy Garlic Miso Ramen was the right amount of spice for me. If I had some Sriracha available, I would have drenched it in the soup and I’m glad I didn’t. I had the Ramen for how it was presented to me which was fantastic. The broth wasn’t rich like my friends. It had this clean thin taste to it. If my mother was Asian, this would be the soup she would make……. oh wait…… she is.

Neither one of us completely finished our bowls of Ramen, it was just so much we couldn’t do it. We had to save some room for the final course.

In speaking with the owner Jack Fukuda, he told me their dessert item called Annin Tofu was a must try. It was something me or any of my friends I had spoken with never had. Being the adventurous type, I was all for it.

Annin Tofu is a soft, jelled dessert made with agar and almond essence. It s extremely popular in Japan. 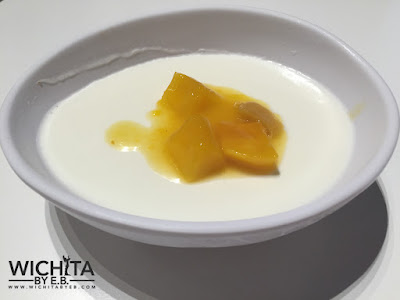 I’ll be the first person to admit, when it came out I was thinking, “WTF?!?!?” which for you children  readers stands for “What? Tofu? Food?”

Even the people around me gave it this awkward look. To further add to that, I’m not the biggest tofu fan and didn’t know what to expect. 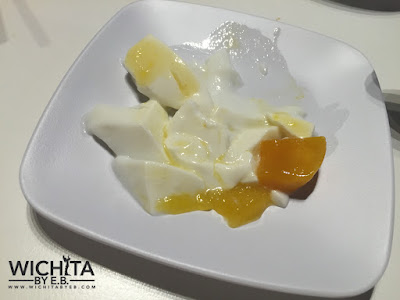 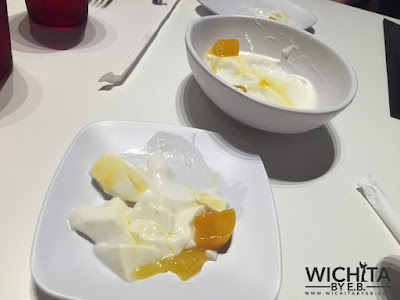 It was the most amazing thing ever. My friend had to stop himself from smiling because he found it so good. I was floored…..shocked…….surprised at how good it was. It doesn’t taste like tofu, I’m not sure if tofu is even in it.

It had this refreshing almost minty type aftertaste to it. Neither my friend or I could really put our finger on it. The only thing we could do was continue to eat it. He said it was for sure the highlight of the meal for him just because he was not expecting for it to be that good, and it was fun and exciting to eat.

It had the texture of flan but the flavor of something we will have to go back to try again.

We thought the Ramen was going to steal the show but man did the Annin Tofu ever come out of no where. I honestly haven’t been that pleasantly surprised since Evan Wessel hit four three pointers against KU in Omaha.

You HAVE to try the Annin Tofu when you go in; it’s totally worth the three dollars. Next time I’m at Yokohama Ramen Joint, I’ll be buying it for random strangers. Mark my word. Then they’ll be giving me the same “WTF” look.

To see some of the food in action check out our Instagram page.

Again it was just great to see a place with such enthusiasm and pride in their product. My friend said it’s something Wichita needs more of. He can see Ramen being the next big thing in Wichita but we will know who started it all……Jack Fukuda, owner of Yokohama Ramen Joint.

It was nice to see his college professor even show up to honor and congratulate him on all the work he had done with this and Beard Papa’s. 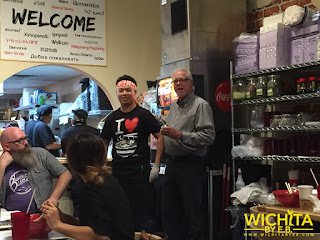 Remember they are located at 613 W Douglas in the Delano District and open this Sunday, April 24th at 11 am. They will have a special opening ceremony at 10:30 am that morning if you’d like to show up. Otherwise, they will be open from 11 am – 8 pm. I’ll be stopping by for sure. After Sunday, their regular hours will be 11am-8pm from Sunday to Thur, 11am-9pm for Friday & Saturday.

They will be open for dine-in and carry out. Just be aware they told me they won’t be doing the Ramen portion of their menu for carryout. It’s best served right then and there.

I know the Delano District is very happy to have them in the neighborhood. Other Asian restaurants in the area might be saying, “Oh crap” as Yokohama Ramen Joint is going to be a big player in the restaurant game.

For more on Yokohama Ramen Joint, check out their Facebook Page!