This one is going to be a quick review. Short and to the point. 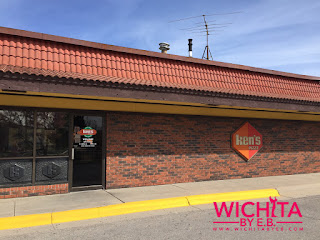 While in Hutchinson, my family and friends were starving. It was late on a Sunday afternoon and many of the recommendations we received were all closed by the time we were available to eat.

In searching restaurant after restaurant, we noticed Ken’s Pizza was open so we made our way there.

We just missed their lunch buffet by 20 minutes so we had to order from the menu. The salad bar was open though so all six of us made a stop to the salad bar which was $3.99 a person for one trip. You could do unlimited trips for an extra dollar.

After browsing through the menu, we settled on two types of pizzas: their version of the Supreme and a BBQ chicken pizza with thin crust. We ordered the medium sizes which was eight slices a piece. We didn’t want to gorge ourselves before we had to drive back to Wichita.

Our food came out promptly and one person at our table said it best. You could tell everybody was hungry because not a single person said a word. 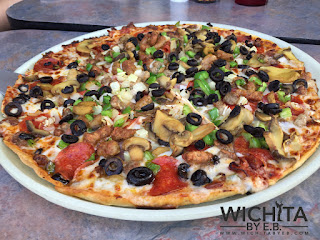 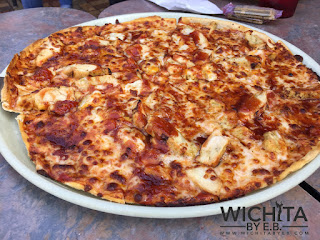 Between the two pizzas, the favorite was the BBQ Chicken Pizza. One of my brothers called it possibly the best he’s ever had. The BBQ sauce on the pizza was sweet, tangy and just all around heavenly.

Their Supreme was good but heavy on olives. Come to find out most people in our group weren’t big olive fans so we should have just ordered it without olives but nobody wanted to be “the picky person”. Still there were a solid amount of toppings on the pizza…..actually both pizzas were generous with how loaded they were.

All in all, we left pleased and happy. Between the six of us, all with salad bars and two pizzas it was around $45 which wasn’t too bad.

The service was very friendly but a little slow on refills……..just once did we get refills on drinks for a place that wasn’t busy when we arrived.

The atmosphere was nice, it kind of reminded me of a Godfather’s Pizza type of feel. They have a patio in the back which was perfect for the nice day.

Would we go again? Yes….if we’re in Hutchinson. My brother is still talking about their BBQ Chicken Pizza a week later.