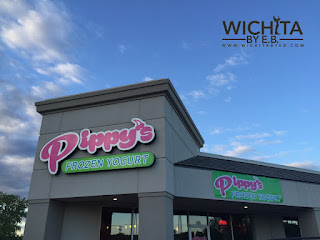 In recent years, the Frozen Yogurt has seen a decline in business not too longer after it just blew up in Wichita. Well I know two kids in my family who don’t think it’s going away and decided to grab an assist from my two favorite guest bloggers: Cylee and Bella.

They’ve joined me on so many past blog reviews which all seem to do with desserts. So it only made sense to give them a call to see if their evening was free to join me. The percentage chance of them saying no was going to be zero. I was right.

When arriving at Pippy’s, they were pretty sure they’ve been there before. Why? Well to a couple five year old’s it has the exact same look and appeal of every single Frozen Yogurt shop in town. 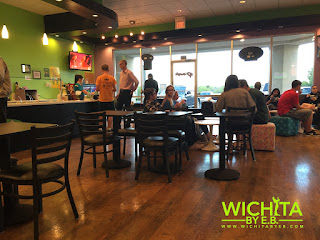 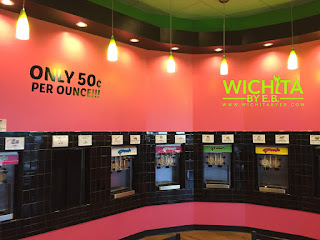 According to them, there was seating for adults and seating for children. You had some four tops, some small little bench seating for kids, literally much of the same around town.

I had to tell them over and over they were at a Pippy’s, not a Peachwave, not a Yo-B, not an Orange Leaf.

The pricing at Pippy’s runs 50 cents per ounce which is a penny more than Orange Leaf and three cents less than Peachwave. To Cylee and Bella that didn’t matter a single thing. Bella actually had a ten dollar bill in her pocket but I couldn’t bring myself to let her pay for anything. I’m setting this bar in life for her where she thinks men should pay for everything. To her future husband…..I’m sorry.

As for the Yogurt selection, there were about a dozen options to choose from. For a yogurt shop, there didn’t seem to be many options aimed at children. Kids don’t really know what a hazelnut, praline, and caramel turtle are. Add to that a couple coffee options they had, it really limited what the girls would like. Many other competitors had fun and exciting flavors maybe Pippy’s will step up their game in the flavor world.

Bella ended up settling for a Vanilla Love/Chocolate Kisses mix while Cylee went with the Wedding Cake, probably in honor of this boy she has a severe crush on in her class. Trust me, I got to hear all. about. it. I went with the Kiwi Strawberry option as it was completely dairy free.

The topping options are the exact same as you see everywhere else with nothing really that stood out to differentiate itself from the competition. 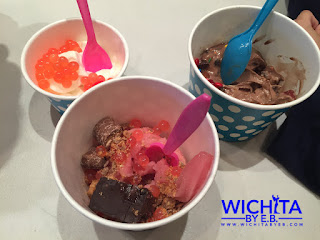 How did it taste? Well both girls finished their yogurts, or as they call it ice cream, with ease. Bella called her frozen yogurt “sooooo delicious and the best thing ever.”. She’s at that stage right now where everything she says is extremely dramatic so I’m not sure whether to believe her sometimes. Cylee finished hers in record time and seemed more focus on the chalkboard on the back wall so she could play teacher.

Overall both girls enjoyed it a lot. So I’d assume any kid would really like it. Pippy’s doesn’t do anything to really set themselves apart, they just stick with the common formula you see at any other yogurt shop. Whether that’s o.k. with you and your family is up to you.

My family certainly didn’t seem to mind and I’m sure they would go back any time especially when it’s the price of free for them.