If you’re following the Wichita Food Truck Scene, then you’ve probably heard of Funky Monkey Munchies. I’ve never gone. But a big shout out to a good college buddy and fellow food truck friend, Robert, for giving me the heads up they were going to be outside his office on Thursday.  I persuaded my coworkers to step out in the rain to continue my Wichita Food Truck Tour.

Funky Monkey Munchies (say that three times fast) serves fusion food. From checking out their Facebook page, they had Hawaiian food one week and then another week it was all sorts of different Korean type fusion foods.

When we arrived, there were so many items on the menu that everybody wanted. So what did we do? Order every item that sounded good to us. 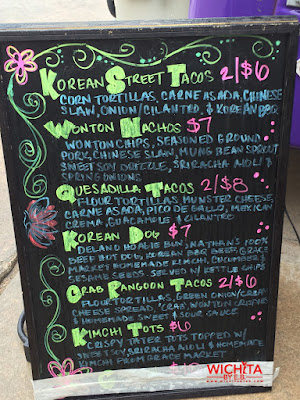 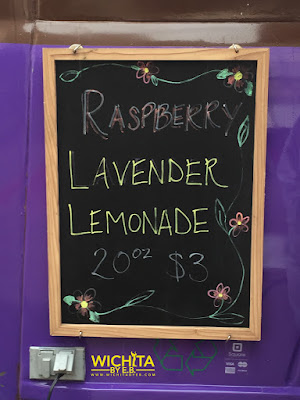 All of this food for five people. A few friends randomly stopped by as well and ordered many of the similar items we did.

I felt bad for the staff at Funky Monkey Munchies because they were just getting rained on the whole time.

The Lavender Lemonade was the first thing that came out immediately and my co-worker loved it. You could really taste the lavender inside but everybody around us that had ordered it as well couldn’t stop raving about it. 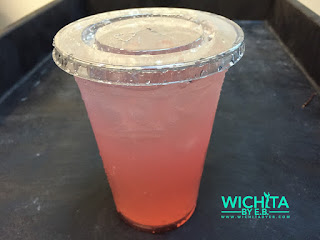 The rest of the food took about 15 minutes to come out which is a little longer than some of the other food trucks we’ve been to.

The very first thing you’ll notice about the food is the portion sizes are huge. Once again, we over ordered.

Here’s what all came out: 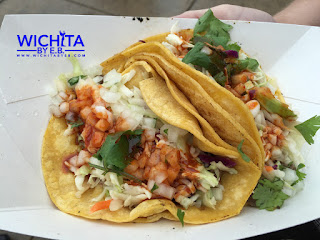 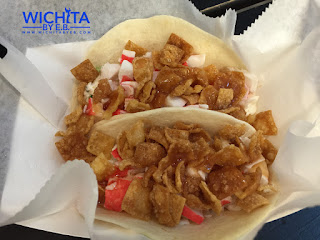 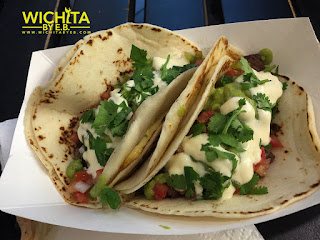 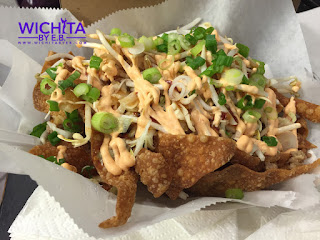 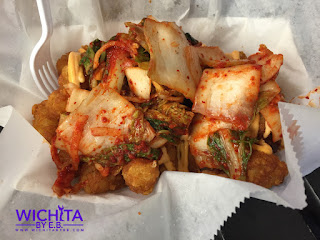 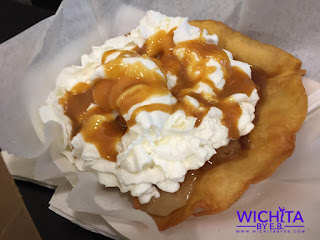 Our one major gripe was the wait time for the food but after that there were no other complaints. The feedback on the food was more than positive.

The Kimchi Tots were Korean greatness. They use Kimchi from  Grace Market (reviewed here) which was the perfect touch. One coworker commented that this Kimchi was so much better than the only other time he ever tried Kimchi which made all the difference in the world. The Sriracha Aioli drizzled on top adds a nice spicy bite to it. This was more than enough to fill one person up.

The Quesadilla Tacos were layered with two tortillas each and stuffed with as many toppings as they could fit inside. Two different people ordered these and thought they were really good.

The Crab Rangoon Tacos were probably the least liked item mostly because it was almost more cream cheese than anything inside.

The Korean Tacos were also a hit especially with the Korean BBQ sauce that made them much better.

The Wonton Nachos are a meal in itself. The look of them alone caught so many oohs and ahhs from random people waiting in line. If you order them, make sure you mix it up good and grab some pork with the Wonton chips. You’ll want every single part of the Wonton Nachos in each bite to get the full experience. We ordered two of these and magically finished them all.

To the end day it was the Apple Pie Bowl. Unfortunately the rain ruined it a little but it was still darn tasty. The bowl tasted like a funnel cake which who doesn’t love? Add in the whipped cream and apples and it’s an instant hit.

Between my co-workers and friends, everybody was stuffed. One friend texted me afterwards that he was ******* stuffed so I assume that’s more stuffed than everybody.

Like we said earlier, the only gripe was wait time but otherwise the food was top of the line. They worked hard out there especially in that pouring rain. I wish I randomly had a tent or canopy in my car for them.

This was Korean Fusion food at it’s best with extremely creative unique menu items. We would recommend Funky Monkey Munchies to anybody.