One of the allures of the Wichita River Festival besides the music, the Medallion Hunt (which I can’t believe is already found) and people watching is of course the food.

One of the biggest foodie news to come out of this year’s Wichita River Festival is White Castle’s temporary return to the city where its roots reside.

White Castle is known for their delicious square-shaped sliders. I’m a huge fan of them but not everybody is. White Castle is one of those places where people REALLY love them or dislike them.

Every year on the way home from Missouri Valley Conference Basketball Tournament in St. Louis, I force my friends to stop by White Castle. Even one of my friends who dislikes White Castle has to make the obligatory stop because his mother is a huge fan and he must obey a mother’s command for White Castle sliders.

They really hate making the stop but it’s a small price to pay to be my friend. 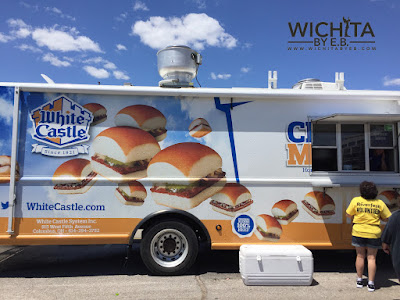 The White Castle mobile unit will be set up at the RedGuard Stage Area which is east of the Wichita Boathouse. They will be there Wednesday and Thursday at 4 pm and on Friday and Saturday at 11 am.

They will serve their sliders and fries but you need to buy tickets to order the food. Each ticket at Riverfest is the equivalent of a dollar.

So four sliders run you $5 and 4 Jalapeno cheese sliders cost $6.

It’s a steeper price to pay than what you can find at the brick and mortars. There it’s 72 cents for a slider and 94 cents for the Jalapeno cheese slider. To buy a 6 pack of the frozen options at a Wal-Mart is around the $4 mark.

I ordered four sliders while my friend who had never had them outside of the frozen options had four sliders and four Jalapeno cheese sliders. 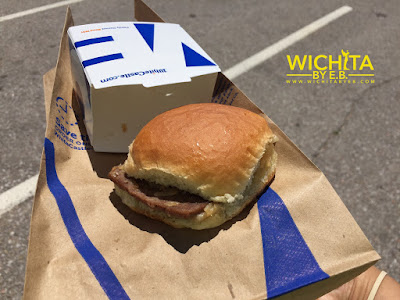 These things come out QUICK!

How do these babies taste compared to the real deal? Not as great as what you can find at the actual restaurants. I’m not sure if part of that is a mental thing but something was just missing. Were they still good? Yes but not as great as I remember having them last a few months ago.

My friend said they were good but not great. The comment was made though, “I could eat a lot of these though if I’ve been drinking.” White Castle would be one of those perfect staples for a college student in the wee hours of the morning.

While they didn’t feel like the real deal at a restaurant, I was still pleased with it. I was of the mentality, “I’ll take what I can get.”

Still worth a try at the Wichita River Festival if you have your button and looking for something you can’t normally find in Wichita.

Remember they are only here until Saturday!