After much anticipation, east-siders in Wichita no longer have to make the seven hour drive to the west side for their Hurts Donut addiction.

The second Hurts Donut is set to open this Thursday, July 28th at 5 am. 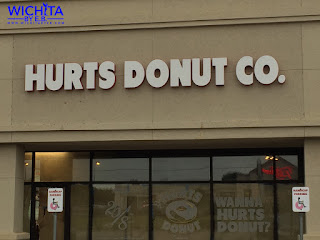 The second location is located at 3750 N Woodlawn.

For those people that like to see and be part of the hoopla, the first 50 customers that morning will be entered into a drawing for free doughnuts for a year!

They will offer the exact same menu as the west side Hurts Donut which you can read about here. It will also be open 24 hours. Unlike the west side location, there will be no drive-thru location but there is no harm in getting out of your car to walk to get a doughnut.

I may drive by on my way to work that morning just to witness the craziness. If it’s anything like the time the west side location opened, lines will be out the door. One thing’s for sure, I will get my fill of doughnuts in within a week of their opening.

Certainly a dozen doughnuts would make a great gift for my sister-in-law’s baby shower this weekend……..right?

For continued updates, check out Hurts Donut on Facebook!