For our 17th stop on our Wichita Food Truck Tour, we headed out to Monica’s Homemade Mexican Food Truck. If you hadn’t guessed it by now, they serve Mexican food. 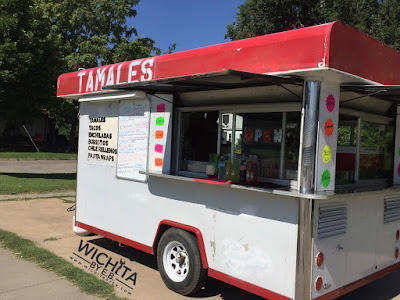 They are best known for their tamales so that is exactly what I was on a mission to try. To be honest, I haven’t had any tamales in town that have really stood out to me which surprises me considering the amount of Mexican options there are in Wichita.

Monica’s Homemade Mexican Food Truck, whom you can Like on Facebook, can usually be found posted up at 406 S. Seneca in front of the Cycle Station near the southeast corner of Maple and Seneca. They do catering and other events, so be sure to follow their updates on Facebook to see where they will be at.

They do accept cash and card but you may want to bring some cash with you. On my visit, they did not have their card reader available. 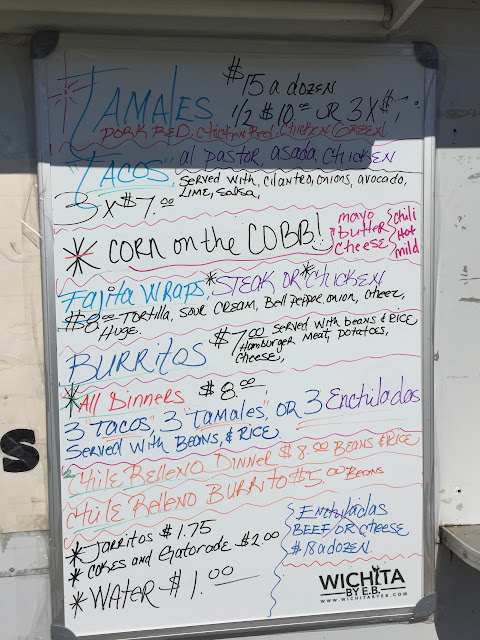 Besides the ever popular Tamales, Monica’s also serves Corn on the Cob, Burritos, Tacos, Enchiladas, Chile Relleno, and Fajita Wraps.

The Tamales can be purchased at $15 for a dozen, $10 for a half dozen, $7 for three or just buy a three Tamale dinner for $8 which includes rice and beans.

I was in charge of picking up food for my brother and I and went with the Tamale Dinner, a Fajita Wrap Dinner with steak, and a couple Enchiladas. I had them mix up the Tamales between red and green options.

Everything took around 10 minutes as the Fajita Wrap was made to order on the spot. While waiting, there was a person walking by who appeared to be someone in need asking for any sort of assistance whether it was money or whatever. One of the owners handed her a Tamale and put it in a baggie for her. I was at standing at a distance; the owner didn’t even notice I was paying attention. I found it to be a very kind gesture especially considering how hot it was outside that day. 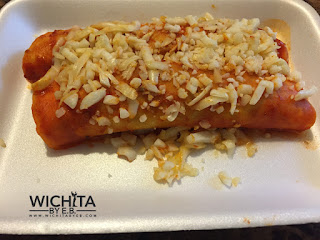 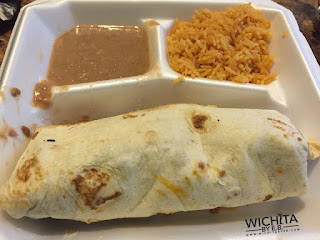 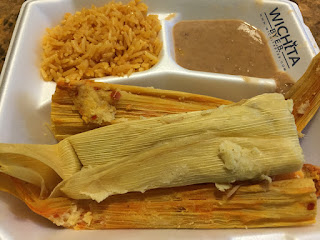 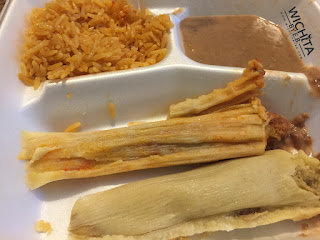 We split one beef enchilada each and must admit it was a great start to the meal. The sauce they used was very light but still packed enough flavor to really stand out. Some places you go to, they just cake on the sauce to disguise the low quality meat. Such was not the case with Monica’s.

The Fajita Wrap was next. To us, it was a really good Fajita inside a burrito. That’s how we would describe it. The steak inside was well seasoned and had all the toppings required for a fantastic fajita to continue our delicious meal.

Rounding out the day was the main event, the Tamales. Everything you read about Monica’s Homemade Mexican Food Truck is about the Tamales. The whole start of the business was because of Monica’s start in Dodge City selling Tamales out of her home. When she moved to Wichita, she would sell them out of a cooler in a KFC parking lot at 21st and Arkansas that she would eventually get kicked out of. She found a truck to rent in Dodge City and started selling them at Harry and Seneca where her truck would be evicted home thus landing her at her semi-permanent spot at Maple and Seneca. This seems like a story that belongs on Shark Tank.

Needless to say, expectations were high for these Tamales.

Guess what? They delivered. Honestly, they are (and since they are in our stomachs, we will say were) the best Tamales ever. I’ve had Tamales in Mexico, Puerto Rico, New York, Indianapolis, etc and Monica’s stood out as the absolute best. Between the red and green Tamales, you can’t go wrong with either one. We actually wish we had ordered more instead of just the three. They were well constructed with incredible flavor and a light amount of heat. There was a good amount of meat within each one and just the right thickness of masa.

Overall just incredible food offered by Monica’s. I will be back again the coming weeks to try their Corn on the Cob and the Tacos. If it’s anything like their other offerings, I know I’ll walk away happy again.

There are over 30 trucks in Wichita and the surrounding area. I am making it a point to stop by as many as possible and list out my favorite ten. It’s a good bet that Monica’s will make the top ten list.

Good People; Good Food. That’s a win/win for me.