Long time readers of the blog should know my insatiable appetite with random food creations. Whether it sounds gross or delicious, there’s a high likelihood that I will try it.

Long time readers of the blog should also know that I am in love with the locally owned Wichita restaurants but it’s time to admit something to the public. I have a secret love affair with Taco Bell’s Naked Chicken Chalupa. 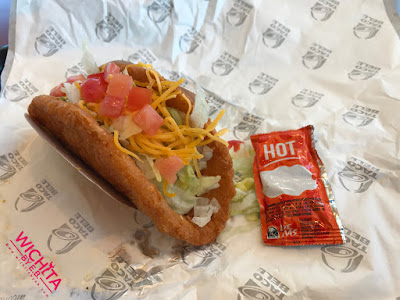 Taco Bell replaced their traditional tortilla shell with a fried chicken shell and my face turned into the emoji with hearts for eyes.

The new creation was launched nationwide on January 26.

You can purchase the Naked Chicken Chalupa by itself for $2.99 or as part of a meal for $5. The meal also includes a Dorito’s Locos Taco, a Crunchy Taco and a medium drink. 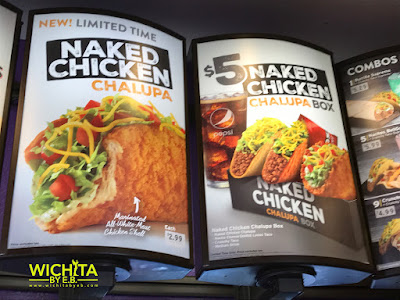 At first glance the Naked Chicken Chalupa was smaller than I expected but also more filling which was a surprise. The chicken patty formed into a taco was one of those creations where you think to yourself, “Why hasn’t this been done sooner?”

The fried chicken shell did a great job of holding everything into place; something you won’t find with the crumbly Taco Bell taco shell. 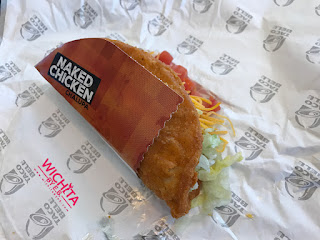 For those inquiring about the actual chicken, it’s four ounces of marinated, white chicken covered in a crispy, deep-fried shell. I’m fairly certain it’s real chicken; unlike the old school delicious McDonald’s nuggets. It’s really as simple as it sounds; a boneless fried chicken with your familiar Taco Bell toppings. It wasn’t crunchy but had a light crisp to it; well seasoned and surprisingly delicious. 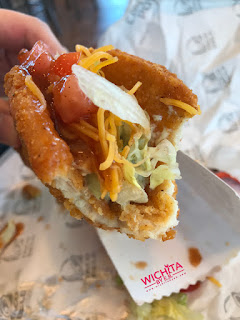 I enjoyed it so much, I ordered a second one to go. Shameless……I know.

After the day ended, I felt so guilty of the affair I had with Wichita Restaurants that I made sure to go to a local restaurant for my next meal. But in the back of my mind, I knew I would probably be ordering a Naked Chicken Chalupa again in the near future.