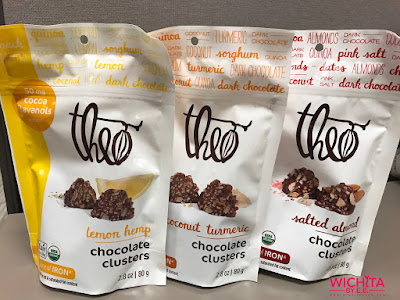 The staff over at Wichita By E.B. were recently given three bags of a new product from Theo Chocolates.

They are called Theo Chocolate Clusters! With a rise in the market for healthier snacking, Theo Chocolates introduced a new line of chocolate snacks that look to embrace the benefits of dark chocolates. These Chocolate Clusters are a flavanol-rich and heart-healthy snack that Theo hopes can catch on with all those people looking for an alternative to the extremely unhealthy snacks out in the market. 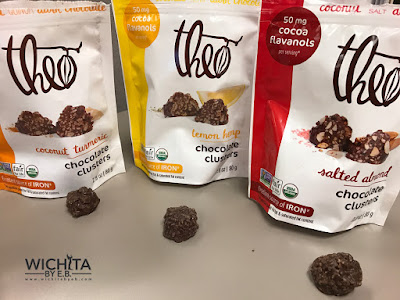 My colleagues and I tried clusters of each of the three flavors and to no surprise; the opinions ran across the board as to which was the favorite.

For the Coconut Turmeric, some people could taste the coconut while others couldn’t. It was the same for the turmeric. Some people felt it had a great after taste, tasted like crunchy chocolate clusters, or mild chocolate flavor to it. I found it to be light on both accounts. Of the six of us who tried them this was actually a favorite of two people.

For the Lemon Hemp, everybody immediately had their eyes opened wide after the first bite. The lemon taste really overpowered your initial first bite. A majority of people found this to be really refreshing especially compared to the other two. Even with the overpowering lemon blast, it calmed down soon after. For two others, this was their favorite.

And last but not least was the Salted Almond. This was my personal favorite. While some people thought it had a strong chocolate flavor or felt it was too salty, I really couldn’t tell. I loved almonds and the salt was light enough that I enjoyed it. This was also a favorite of another person in our group.

It was a pretty interesting taste test that of the six people, it was split down the middle between the three. It just goes to show how different people’s taste buds are.

These bags are now available at Hyee if you happen to live near one. They will soon be available at Whole Foods in a couple months. If those routes aren’t optimal, you can also buy these online at Theo’s website. A 2.8 oz bag of ten clusters costs $5.99.

Reviewing the wired Dell keyboard because why not