Back in February, my friends and I first tried Dempsey’s Biscuit Co. and their hot chicken. It’s a place we’ve frequented multiple times since.

They are known for their three levels of heat: Hot, Hot Hot and The Reaper. We found the Hot to be not spicy at all and the Hot Hot to be a flavorful type of heat but no real burn. I was the only one in the group who had tried The Reaper and felt it was palpable with good heat that didn’t linger around long.

For future ventures out that way, I would order The Reaper again and never found it to be really all that spicy. Keep in mind that’s coming from someone who orders spicy foods quite a bit. Others would have the same opinion on The Reaper and would let Dempsey’s Biscuit Co. know about it.

Looks like those comments have led Dempsey’s Biscuit Co. to change the recipe used in both Hot Hot and The Reaper to the surprise of many, myself included. They changed it up to add some more heat to Hot Hot and made The Reaper what I believe to be ten times hotter. I found out the hard way. 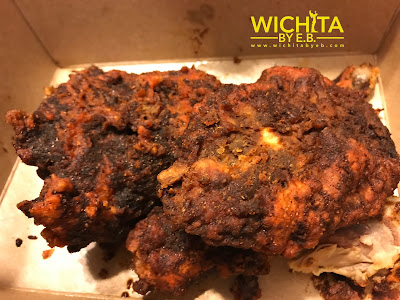 I ordered some Reaper to go, brought it home and started chowing down on the chicken. I thought nothing of it but then seconds later my face was on fire. My tongue felt like I had just bit into a lit candle. The heat was then spreading to my cheeks, lips and face. My eyes began to water and with no napkins around the first instinct was to wipe my eyes with my hands which I did.

That was a big mistake. The sauce was now in my eyes.

I immediately ran to the kitchen sink and began to flush my eyes with water while my mouth was on fire. I would switch the running water from my eyes into my mouth…. then my eyes would catch back on fire. It was a miserable experience. A day later, one of their employees who I play basketball with would inform me of this recipe change. A quick phone call to Dempsey’s would confirm this change as well.

That was one of the few times I couldn’t finish my meal because of the heat. Does it rank up there as the hottest thing I’ve ever eaten? No, that still belongs to the now closed Mr. Kapow’s that I wrote about six years ago. But this was certainly one I’d have to rethink in trying again. If I were Dempsey’s, I would turn The Reaper into some sort of food challenge like who can finish a combo bird in the fastest amount of time.

If you’re a huge fan of hot, spicy foods like myself and found The Reaper at Dempsey’s to be a weak excuse for spicy then try it again.

Dempsey’s advertises The Reaper “for those that ain’t got no soul”. I’ll add that once you try it, you “ain’t gonna have feelings in your mouth either”.