The Kansas State Fair originated in Hutchinson, KS in 1873. Since then 144 years have gone by and I have only been to the fair once. In contrast my brother and his family go nearly everyday the fair takes place.

In need of burning some vacation time, I decided to make use of my day off by driving nearly an hour to Hutchinson to attend the Kansas State Fair and try out, what else….the food! There were many vendors on hand such as the popular Chan’s Chicken and Pronto Pups.

Here’s a look at my day at the fair with the family.

Fried Oreos
A co-worker recommended these to me and they are worth the five dollars. Many different vendors have these on the menu. After the Oreos are fried, they lose the hard crunchy texture and end up being very soft and gooey. We liked them quite a bit. My sister-in-law said they would have been even better with something to dip them in like icing. 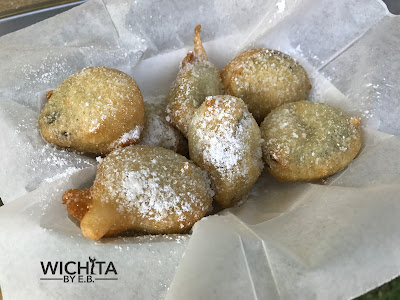 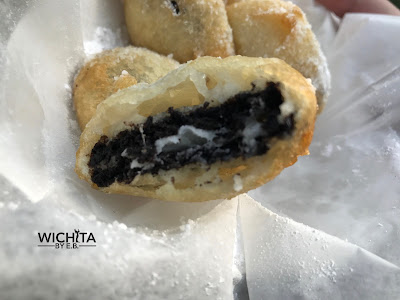 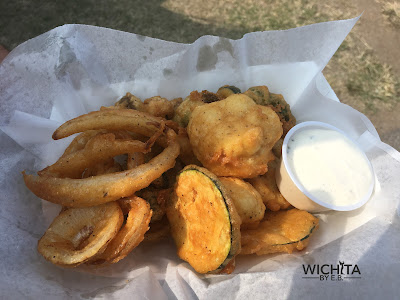 Candied Jalapenos, Habaneros and Ghost Peppers
One of the vendors inside the buildings were selling jars of candied spicy peppers. We all loved these immensely. They were giving out free samples on tortilla chips and cream cheese. I loved them so much I bought a jar of the Candied Ghost Peppers and Candied Habaneros. Eating spicy food is a hobby of mine or at least that’s what I tell myself to allow me to overdo it. 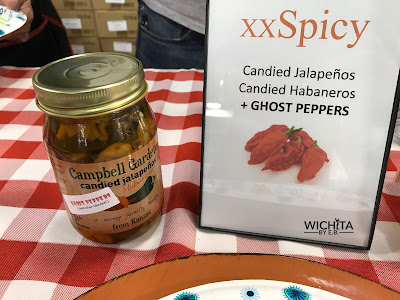 Honey Straws
One of the big fair competitions they have is best honey. We spoke to an entomologist in depth about what makes good honey. She mentioned the lack of crystallization, water levels inside honey, clarity, all sorts of things one would never think of. They then pointed us to the honey vendors and we purchased some honey straws for 50 cents a piece. They ranged from mild to intense levels of honey. They also had honey sticks for a quarter a piece. 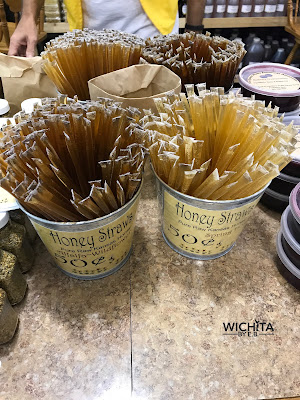 Old Texas Root Beer
If you love root beer, have we got a deal for you! For $12-16, you can buy a mug. The mug allows you to then get free refills on root beer and iced tea all day. If you bring the mug back, you can pay $6 to get a stamp for unlimited refills another day. There are many Old Texas Root Beer stations throughout the fair to keep your mugs full. 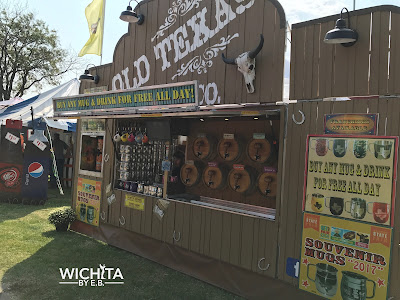 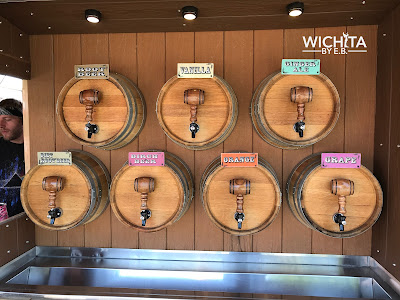 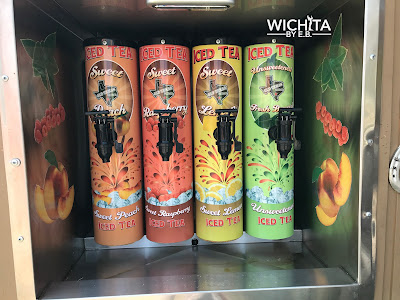 Corn on the Cob / Corn in the Cup
For $5, you get your choice of corn on the cob or corn in the cup at the Original Corn Roast. Then you can douse it with a huge variety of toppings. This is a must for anybody who wants to make their day corny and fun. 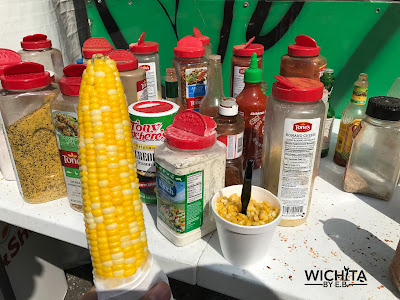 Mac Attack Burger
At the Carousal Cafe, you can get a Mac Attack Burger for $9.75 + tax. If you take a closer look at the bun, it’s fried mac and cheese inside. This was better than we anticipated; essentially like a cheeseburger. At first, it was a little odd having the macaroni texture mixed in with the burger but you got over that quickly. My nephew helped finish most of my mac and cheese. Being lactose intolerant, it was a major risk I took for the sake of blogging. 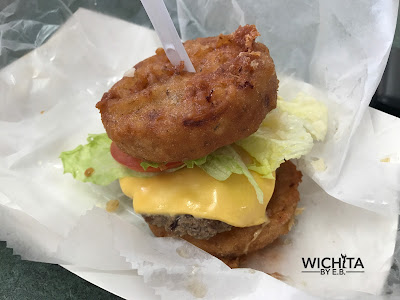 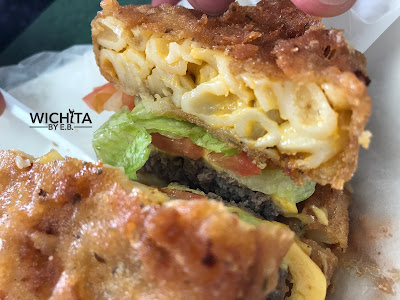 Funnel Cakes
What fair visit wouldn’t be complete without $6 funnel cakes? It brought me back to the days of Joyland when you would take your report cards and get tickets on the amount of A’s you received. Then you would use those tickets on Funnel Cakes. 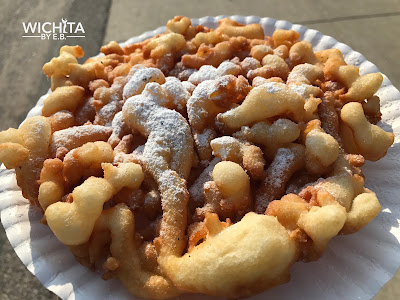 Italian Sausage
$7 and comes with options of onions and peppers on top. When you’re getting tired of the fried foods and need a real meal. This is a go to. 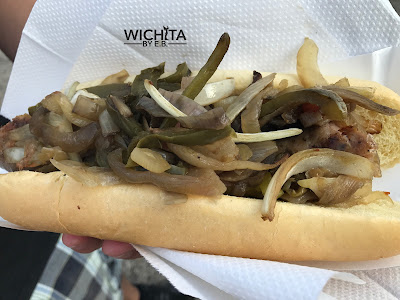 Stuffed Cucumbers
At $6 a pop, you can have yours stuffed with chicken salad, seafood salad, or tuna salad. Since it’s the fair and it’s Hutchinson, KS, I opted for the safest of the three options: chicken salad. I would describe this average at best. It wasn’t as much chicken salad as I thought it’d be and mostly just cucumbers. If you’re going to order this, share it with another person. 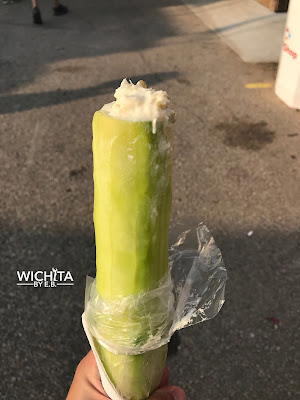 Tacone
At Rotten Rodney’s, you can get a Tacone for $7. Just like it sounds: It’s a taco in a cone-shaped shell. It has taco meat, taco sauce, cheese, tomatoes, lettuce and sour cream. My sister-in-law highly recommends the Tacone. Let’s be real here, life isn’t complete without tacos. 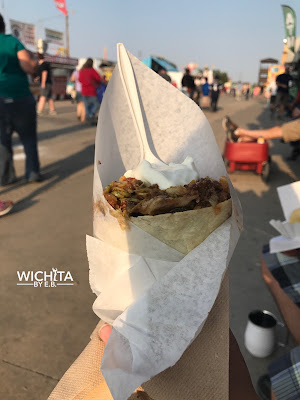 Bottled Water
Do NOT pay more than a dollar for bottled water. Some places charge $2, $2.50 or even $3 for a bottle of water. There are plenty of vendors that sell them for a dollar such as Rotten Rodney’s, Leimon’s Pizzeria, Old Time Ice Cream, or Allen’s Peanuts.

Admittedly there was nothing fried that sounded too crazy like I’ve seen at some other state fairs like fried bubblegum or fried beer.

That covers our visit at the first day of the fair and my first visit to the fair in over a decade. Surprisingly, I had more fun than I thought I would. I’ll likely go back again before the fair ends next week.

For more information on the fair, head to the Kansas State Fair website.

To nominate your restaurant or event to be considered for a review, please E-mail us with your restaurant information. We are always open to suggestions.
Check out more from Wichita By E.B. by visiting our social media sites:

2 thoughts on “A day of Kansas State Fair Food”