With the perfect weather taking place in the latter half of this week, it made sense to check out a food truck. What better way to take advantage of 70 degree weather than having some food outside?

Our latest adventure brought us to Urban Skillet. This food truck is a little over a year old in the food truck scene and serves chicken quesadillas, fish tacos, wrap sandwiches and pulled pork sandwiches among other items on their menu. They were parked outside of Wesley Hospital this week so I made the trek out to Central and Hillside to give them a try. 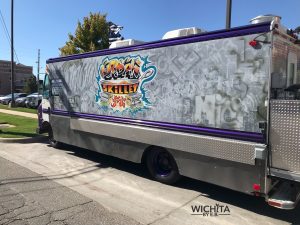 On our visit, this was the menu they had for the day: 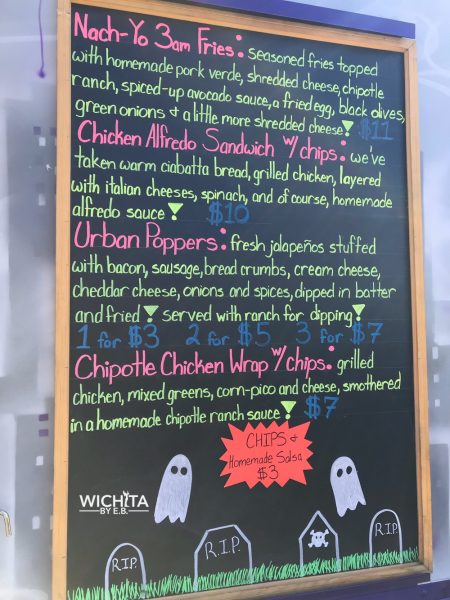 While I was waiting in line, I noticed the two most ordered items were the Urban Poppers and the Nach-Yo 3am Fries. So we went with that along with the Chipotle Chicken Wrap w/ chips.

It took around 10-15 minutes for the food arrive. There was a good size line formed out in front of the truck that afternoon.

Another friend who worked at Wesley also had ordered the Nach-Yo 3am Fries before I arrived.

Starting off with the Urban Poppers, they were fantastic; much bigger than most jalapeno poppers you’ll find around restaurants.

The real winner was the Nach-Yo 3am fries. They were a hit for everybody who had them. They are seasoned fries topped with homemade pork verde, shredded cheese, Chipotle ranch, spiced-up avocado sauce, a fried egg, black olives, green onions and a little more shredded cheese; essentially everything sold inside Dillon’s in one dish. Don’t scoff at the $11 price tag, you’re getting your money’s worth. My friend was eating them and told me she knew she was going to feel like crap. All that food is a total gut bomb but you can’t stop.

Then there was the Chipotle Chicken Wrap. Unfortunately it was a real snoozer. The description said it was grilled chicken, mixed greens, corn-pico and cheese, smothered in a homemade Chipotle ranch sauce. Problem was there wasn’t much homemade Chipotle ranch sauce to be found. The wrap was on the dry side and didn’t pack much flavor. My friend had some coworkers who ordered the same thing and said it was “pretty mediocre”. Had Urban Skillet truly smothered it, it could have been much better as the sauce wasn’t half bad.

Two out of three items were pluses while the other was a minus. Can’t win them all. If you decide to check out Urban Skillet, you definitely have to get the Nach-Yo 3am Fries. That looks to be the true highlight of their menu.

What to expect at Napoli Italian Eatery