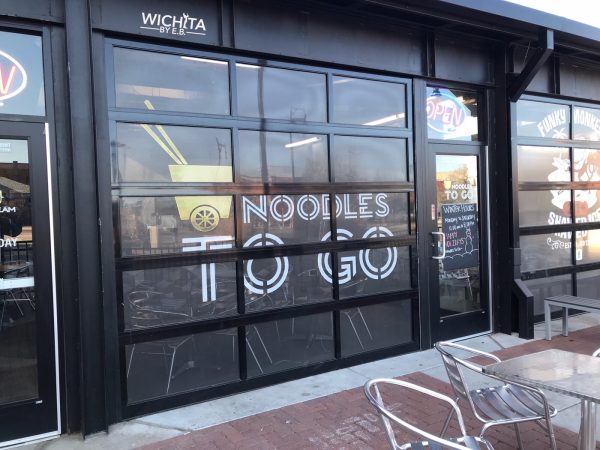 The Union Station kiosks at 701 E Douglas has gained another tenant this month. The long-awaited Noodles To Go is now open and being a huge fan of carbs, I had to gather the troops for a lunch outing to get a first hand look at this new noodle restaurant. 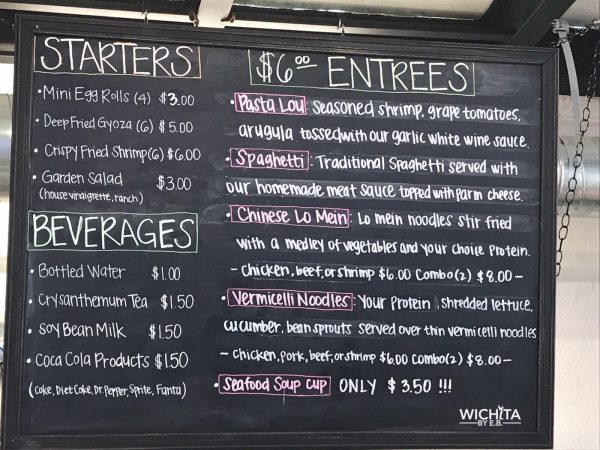 For now the menu is very simple, consisting of four noodles dishes, one soup, a few fried appetizers and a salad. All the entrees cost an affordable $6 but for an extra $2 you can do such things as add a second protein or add extra noodles. To get a true full insider look into Noodles To Go, we ordered every entree along with a couple appetizers.

We went there with little expectation and left impressed.

The vermicelli noodles were very light and similar to bun dishes found at Vietnamese restaurants. The Pasta Lou was also a hit. My colleague was very happy that it came with King’s Hawaiian rolls. The pasta came with 5 large shrimp that she was able to cut up so there was shrimp in nearly every bite of pasta. The shrimp was cooked perfectly and had a nice grilled charr flavor. While the pasta was a bit over-cooked for her liking, it wasn’t mushy by any means. The sauce also had chunks of garlic but tons of flavor. Her main two dislikes were that she had to pull the shrimp tails off on a couple of pieces and wishes there were more tomatoes.

Two people went with the lo mein. One person felt that the chicken and shrimp were very good, nicely sautéed and juicy. While the noodles didn’t have much flavor in her opinion and could have used some more sauce, the veggies were great. They had a nice crunch without being underdone. My other colleague really enjoyed his lo mein and ordered extra noodles which he felt was way too much food for him. That’s never a bad problem, is it?

Then there was the spaghetti. This was a bright surprise for me. I really wasn’t expecting much but the meat sauce was so delicious. The homemade meat sauce was so flavorful and was loaded with chunks of meat. Often you’ll find meat sauce where there the meat is sporadic. That wasn’t the case with Noodles To Go. The sauce wasn’t overly runny and the noodles were great. My biggest regret was also ordering double the noodles. It made for a very tiring afternoon.

The appetizers were loved by all. The mini egg rolls and gyozas were a hit. They didn’t have that cheap frozen food flavor. One of my colleagues was trying gyoza for her first time and was instantly a fan. The seafood soup was similar to a eggdrop soup with shrimp and imitation crab meat. I love eggdrop soup and I love seafood so this soup was right up my alley and perfect. Eating this along with the spaghetti was an odd combination but still made for a great lunch.

All in all, everybody was incredibly pleased with what they ordered and would go there again in the future. It’ll be interesting to see how Noodles to Go fares during the winter months. The now closed Douglas Street Tacos cited lack of traffic for their closing and I would love to see Noodles To Go prove them wrong as the food here was affordable, delicious and worth the drive. The size portions were spot on and the service was quick and friendly. It’s similar to a Noodles and Company in terms of price in case you’re wondering. So if two places are similar, why not go for the local option?

Give these guys a try!