I’m pretty sure I have the word sucker written on my forehead or there is a memo at work that says, “Eddy will try anything.”

Last week, I received a message from a colleague telling me his group got their hands on the World’s Hottest Chocolate Bar. He starts telling me it contains chili extracts rated at 9 million Scoville Heat Units, that they are 900 times hotter than a jalapeno, and that not many people have tried it yet. I actually had the willpower so say no that day. 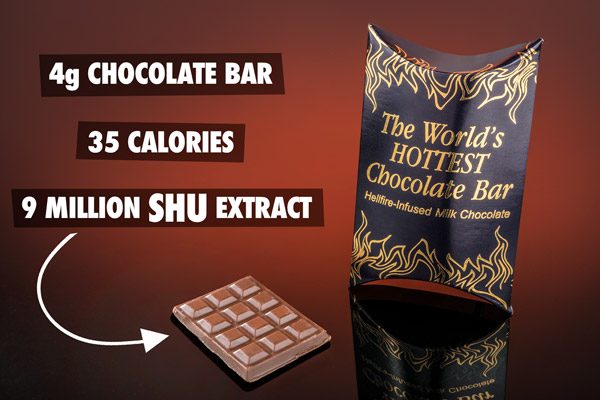 The next day came and it dawned on me there was another colleague of mine who would definitely try it. So I reached out to him and gave him the details. He replied “Sure, I’ll try them.” I’m thinking to myself, “Fantastic, I can pawn this off on someone else.”

That afternoon we walked over to the chocolates and see there were quite a few squares left. They were literally no bigger than a dime. As you can see above from the picture, you’re only supposed to take one of those little squares at first. When we walked over, there was a little crowd forming and watching with excitement. My colleague grabbed not just one but two squares. I felt as though that was an attack on my manhood. So what does any guy who feels challenged do? I went against what I originally told myself I wouldn’t do and took one square. Stupid….I know. And for those wondering, if my colleague jumped off a bridge that day, I probably would have too. 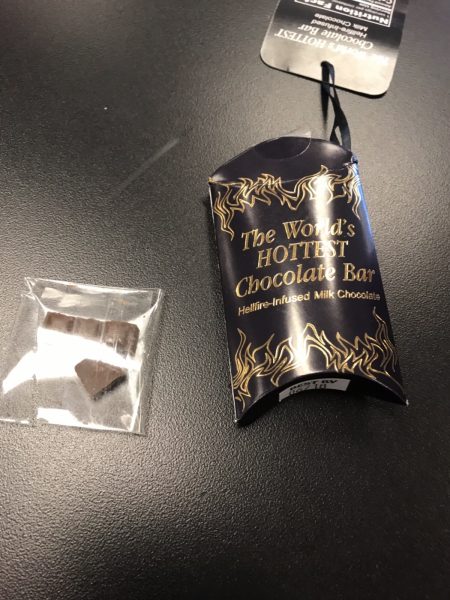 I took a tiny little chocolate square, no bigger than a dime and popped it in my mouth.

The chocolate immediately began to melt in my mouth as I swallowed. Then at the drop of a dime (pun intended) I could feel the chocolate scratching at the back of my throat. Twenty more seconds go by and the scratching turned to clawing. I saw a stack of bottled pop (keep in my mind, I don’t drink pop and pop is the one of the worst things to drink with this) and asked if I could have one. The closest thing was a bottle of Coke and I immediately started taking swigs of it to stop the burn. It’s been years since I’ve had a Coke but it was immensely better than the burning sensation going on inside my body.

I looked over at my colleague while my face was starting to turn red and he stood there all smiles. He said, “Yeah that’s hot and there’s a little scratching at the back of my throat but it’s OK.”

If I could talk, my reply would have been, “OK? It’s OK? I feel like I just cooked some pizza rolls in the fiery pits of hell and ate them straight from the fire while the inside was filled with lava.”

We thanked the guys and start walking back to our desks. At this time, my colleague was all fine and dandy. The pop I was drinking was starting to make me burp from all the carbonation. With each burp, I thought I was going to puke. My eyes were watering, my cheeks were red and my face felt as if someone set an iron to it.

Once we arrived back, someone literally took a look at me and said, “Someone broke Eddy.” Yes, I felt broken. At my desk, I just sat there wondering if I was going to throw up. It wasn’t a great feeling and next thing I knew my stomach was churning. I wish this was an exaggeration but it wasn’t. A few colleagues ran down and grabbed me some Rolaids, Tums and chocolate milk. Now keep in mind that I’m lactose intolerant, but I was in need of something to soothe my stomach. At this point massive diarrhea was better than the massive burn taking place.

I eventually caved in and start popping Rolaids while drinking the chocolate milk. Without getting into any specifics the next twelve hours weren’t ideal. It was by far one of the hottest things I’ve ever eaten. My colleague said that it was the second hottest thing he’s ever tried behind the Carolina reaper peppers someone brought one day while looking all cheery and at peace with what he had done.

If you’re interested in buying these yourself, you can purchase it here. They are $14.99 for twelve little squares. If you’re buying it for yourself, there’s a little challenge called Twelve Minutes of Pain. The goal is to take one small square every 60 seconds until you eat all twelve.

You have two choices. Order it yourself or learn from my mistakes. Enjoy.