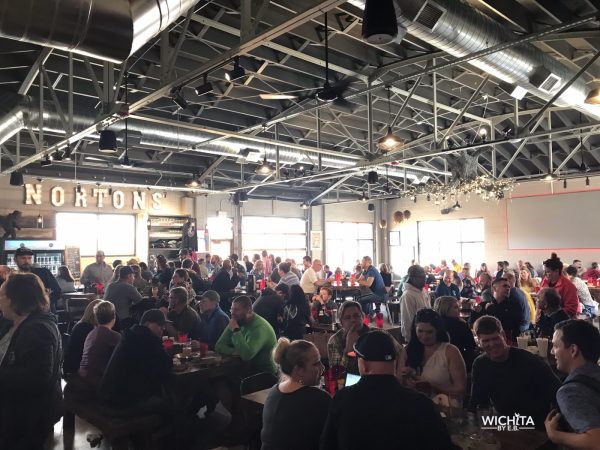 Norton’s Brewing Company’s opening has come and gone. My friends and I stopped in for a few hours to get a glance of what you can expect on your first visit to Norton’s.

For starters, just saying 9,000 square feet doesn’t do it justice. Norton’s is massive. With a capacity of 158 in the dining room, there is plenty of seating so the fact that every seat was taken and there were long lines in the middle of the afternoon just goes to show how much Wichita loves a good opening. The vibe of Norton’s was so laid back and chill; that was immediately noticeable upon walking in.

Along with all the seating, there’s one big projector at the south wall. There are no other tv’s inside at the moment. 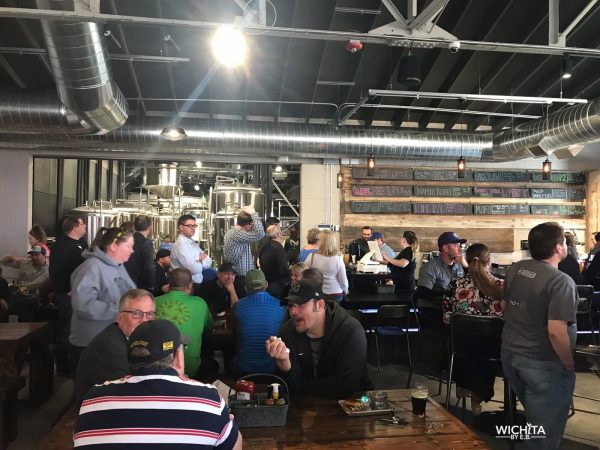 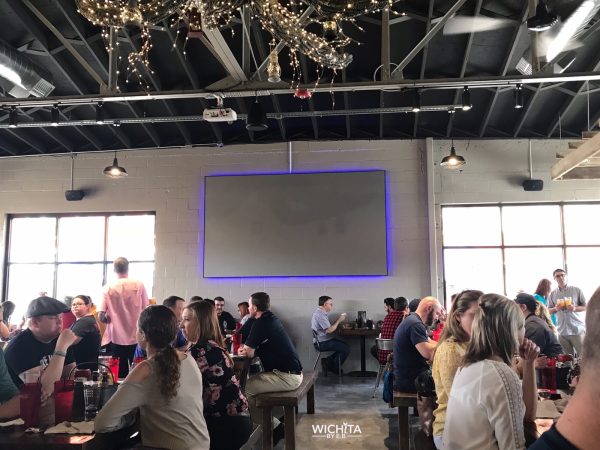 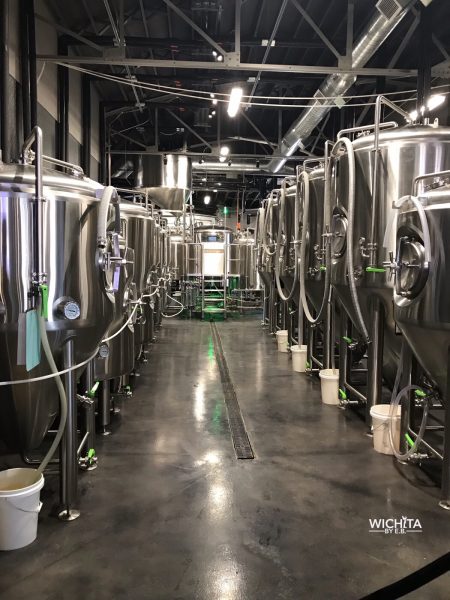 While they don’t have their liquor license yet, that’s on the way. For right now, they are serving just beer. Once the license comes though, here’s their full drink menu (yes….that’s Boone’s Farm you see): 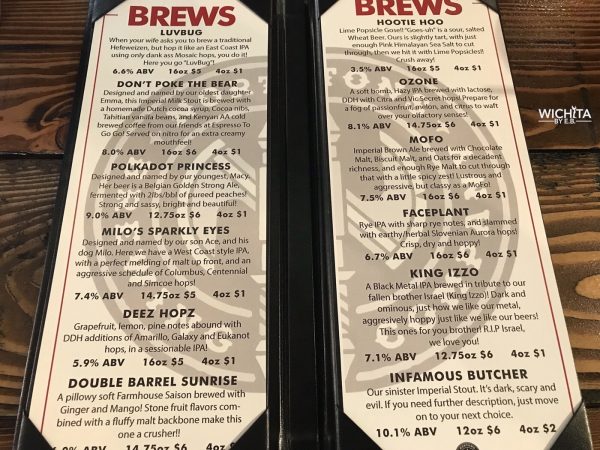 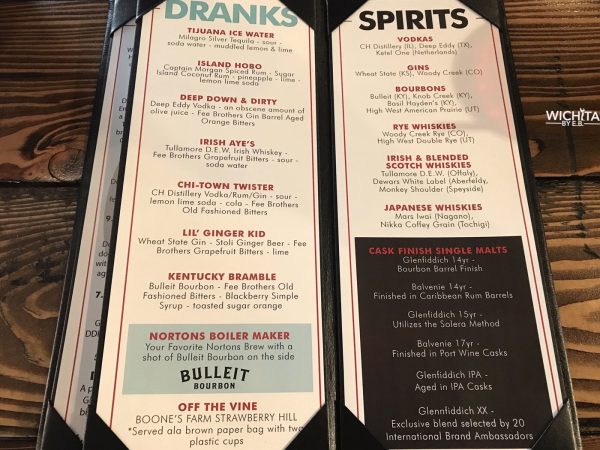 In the coming month, they should be completing work on their outdoor beer garden which should hold 350 people. The area will be family friendly, dog friendly and include some yard games. They already have shipping containers placed out there which they plan to cut open and turned into lounges. On top of all this, the garden will have a 20×36 foot stage for musical acts. I’m really excited for this and their liquor license as long as the Wichita weather can cooperate! 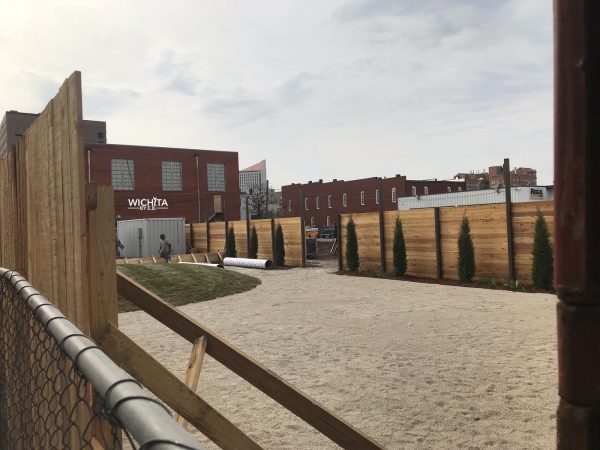 When it comes to beer, I’m very basic and don’t claim to be a beer connoisseur of any type. I rely on my friends to provide me the feedback. We tried multiple samplers and between our group tried all twelve beers found on their menu.

One of my friends noted that some of Norton’s beer were similar to those found at Central Standard Brewery. Another buddy said they have a lot of IPA style beers so if you’re a fan of those, you’ll have several to choose from. The favorites for everybody included the Don’t Poke the Bear, Deez, Hops and Double Barrel Sunrise. My biggest beer friend really liked all that he had and noted the beers had lots of flavor and he looks forward to returning to try all the other ones he missed out on.  Of all the ones I tried, Luvbug, Deez Hops and Don’t Poke the Bear were my favorites.

A big favorite among the ladies was the Hootie Hoo which is a sour, salted wheat beer and hit with a lime Popsicle. Yes…. it taste like a lime popsicle. Let me tell you, it’s not just a winner with the ladies. All the guys at the table loved it as well. 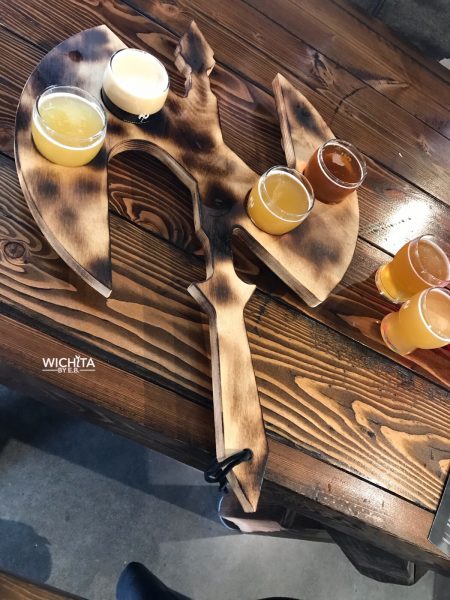 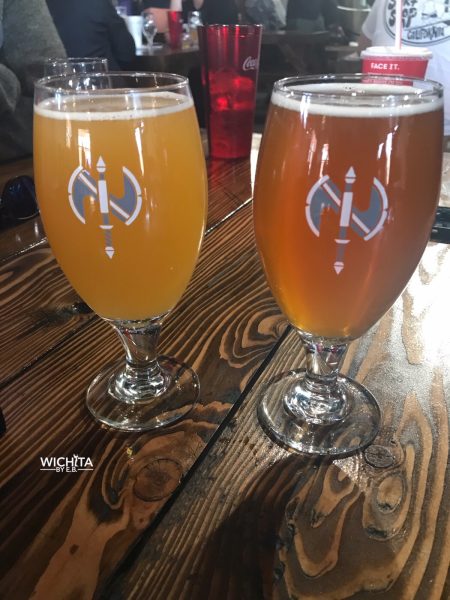 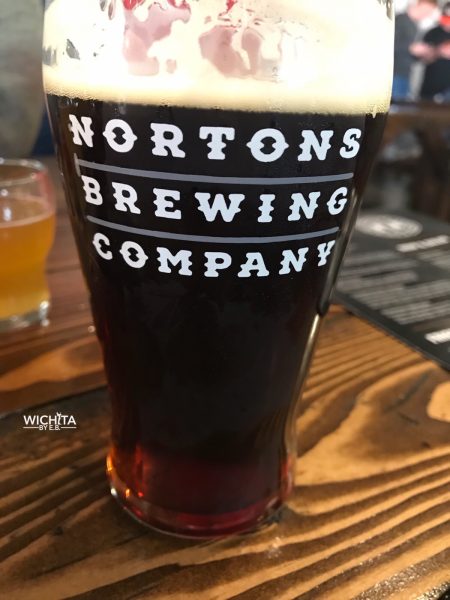 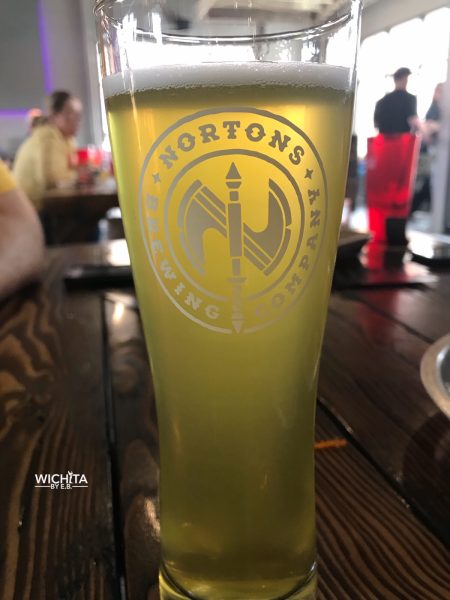 The biggest question I had was “How’s the food?”. Well for your benefit I stuffed myself with food to the point I could barely walk outside. While other people were stumbling because they were drunk, mine was totally food induced.

For the starters, we had the Dirty Fries and the Bacon Crack. Both were phenomenal! The Dirty Fries are topped with mushroom gravy, bacon, pepperoncini’s, green onion, tomato and parsley. Then it’s drizzled with a cream cheese sauce. Then you have Bacon Crack which is hand cut and thick candied bacon with maple syrup, honey and brown sugar, and seasoned with cracked black pepper and cayenne. Our table had no problem finishing these off. When it comes to appetizers at a bar or brewery, Norton’s did an excellent job and raising the standard. 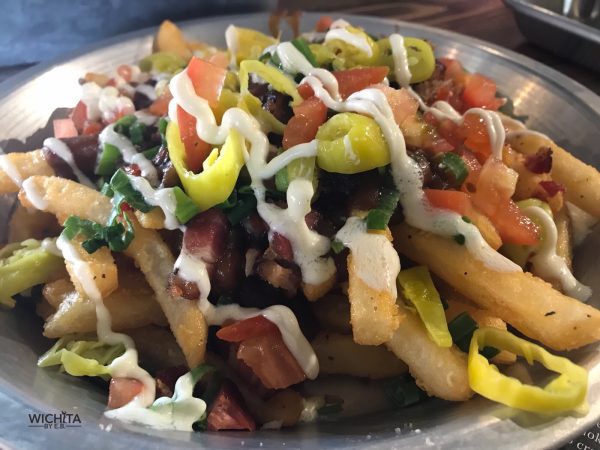 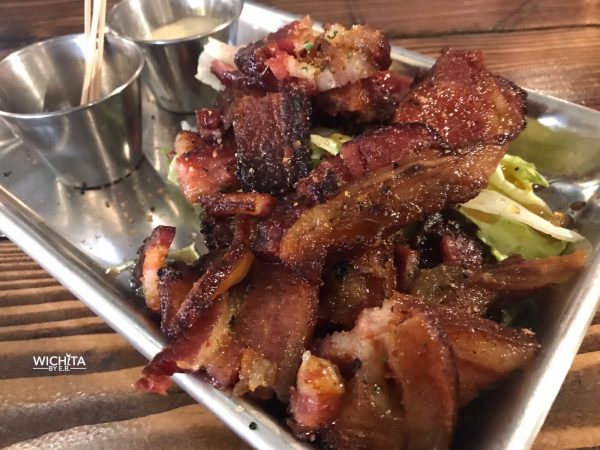 Next up were the entrees. The sandwiches were not available on Friday so it was mostly burgers being ordered. An old friend had the Hangover Burger which was what I meant to order but didn’t. I wasn’t able to get a picture but it included bacon, fried egg, jalapenos, and Sriracha mayo. Yep….I would eat that everyday if my doctor allowed it. The burgers were all very juicy and filling with nice crispy fries to compliment.

Next time I’m in, I’m going to order the burger seen directly below which is the Norton Burger. Imagine a double cheeseburger on crack. 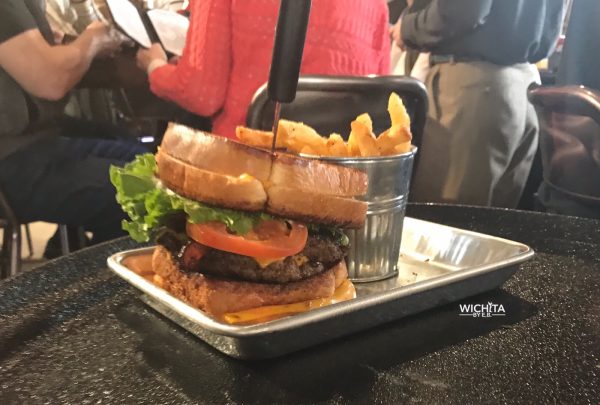 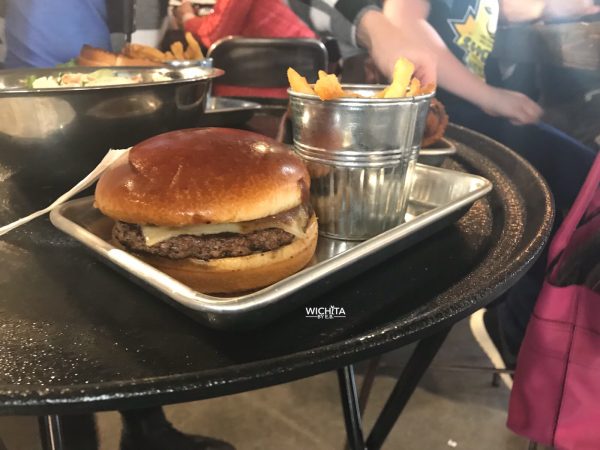 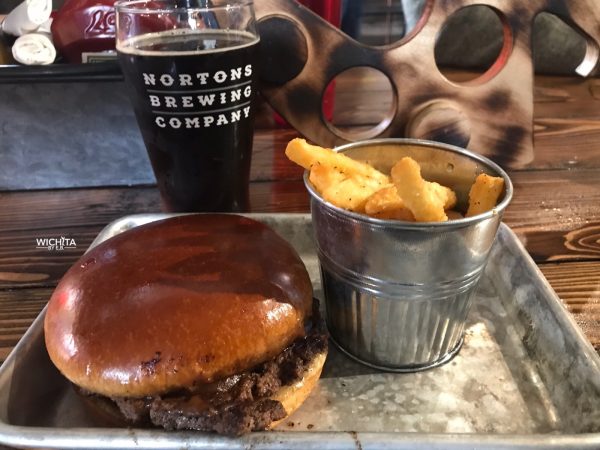 And if burgers aren’t your thing, please tell me funnel cakes are. There are three to choose from: your basic funnel cake dusted in powdered sugar, one topped with bacon crack, syrup, brown sugar and pecan drizzle, then a sweet strawberry shortcake one.

After the burger, bacon crack and dirty fries, I needed something sweet. D-E-L-I-C-I-O-U-S! Back when I used to get good grades and Joyland would give me free tickets for showing them my report card, funnel cakes were always my go to. Now with Joyland gone and no more report cards in my future, Norton’s Brewing Company will have to be a periodic stop for my childhood cravings. 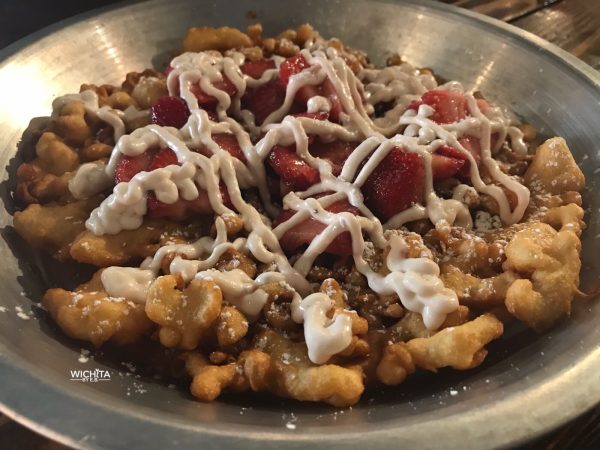 No place is without their imperfections. The biggest noticeable issue at Norton’s was the place is LOUD! With how the place was constructed, all the noise just carries and echoes. Something like acoustic panels or ceiling tiles might help. Our server missed and forget many parts of our order and I’m not sure if it was because of the noise. Then the bench seating was very wobbly. The legs appear to be uneven so if you lean forward, the bench moves forward. If you lean to far back, everybody will be tipping over.

There were some first day jitters we think from our server. There were many times were placed orders and she would nod her head and forget about it later. So maybe it was due to the noise or just simply her nerves. Norton’s was busy the entire time on our visit. Servers were being slammed left and right so it’s certainly forgivable on the first day.

It was cool to see the owner, Dan Norton, working his ass off, serving beers, talking to customers, going from table to table thanking people. You could really tell he was so excited for the big day.

The future certainly looks bright for Norton’s Brewing Company though. They have a great setup with even more on the way. It’s a guarantee my friends will be back again.