There’s something I need to confess. I have no grandkids and I don’t smoke yet I love bingo.

I have many fond memories of bingo either playing with family or even back in college when I was our fraternity’s social chair and set up bingo nights with other sororities. When tossing out the idea of a bingo night, there were many odd stares and confused looks. But when everybody went, everyone had a lot of fun.

There are quite a few places that have bingo around town but the most popular one and the place I frequent most is Bingo Casino. There are two locations that have bingo seven days a week: 540 N West St. and 2431 E Mt. Vernon. 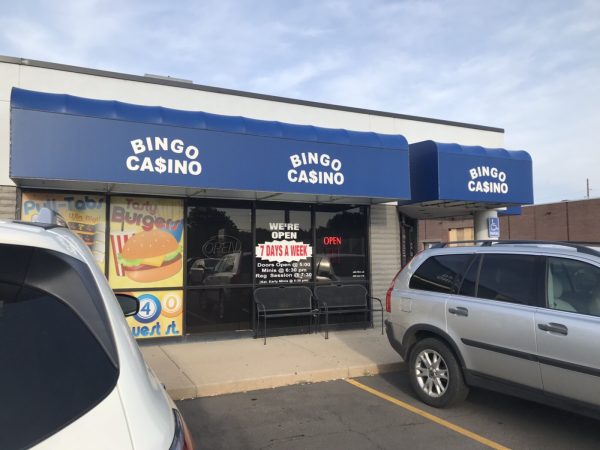 Back long ago, they used to allow smoking inside the bingo halls and you would leave the building smelling like an ashtray. It was so disgusting but fortunately those days are over and smoking is not allowed there. At Bingo Casino, they start their mini sessions at 6:30pm and the regular session at 7:30pm. Sometimes you’ll want to arrive a little early as the place can get packed quick. I haven’t ever played the mini-sessions before I can’t speak to that. Every time I go it’s just for the regular session.

The cost is relatively cheap to play as well. If you just want to play the regular games a sheet of bingo cards costs $9 for a 9-on. The sheet will cover 8 different games for the evening. If you don’t have a bingo dauber, those run around $1.25 and up. I have a a plethora of bingo daubers that cover all the colors of the rainbow. One of these days, I need to purchase a dauber bag and then I’d really fit in. The only problem is the dauber bags look so dang ugly! 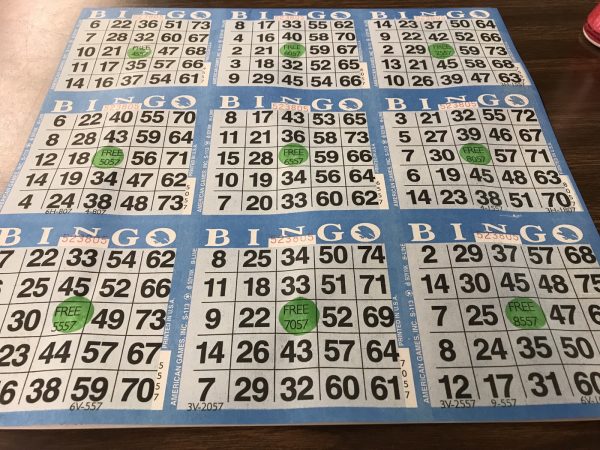 Once you purchase a 9-on pack, you can get a schedule of the games that will be played. All sorts of bingo favorites like block 9, big X, double bingo, picture frame and others are randomly played each day. You’ll notice some games call for special paper which we’ll cover later. 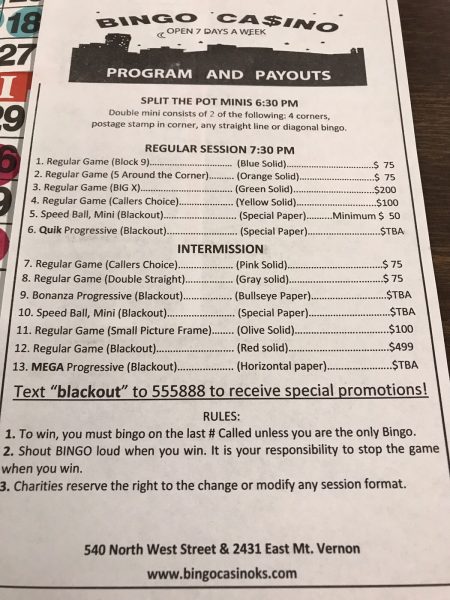 The “special paper” games listed on the schedule refer to additional games such as Megas, Quiks and Bonanza which cost $1-2 and have even bigger jackpots that run $1000 or more. They are your basic blackout games where you need to have all your numbers called to win. The Mega and Quik games are progressive jackpots meaning the prize pool increases each day someone doesn’t win.

Other games such as speedball or double dab are also offered during the regular session. The more games you buy the more it adds up obviously but it also increases your chances to win……. or so I’ve been told. That hasn’t been my experience yet I still go and have fun every time. 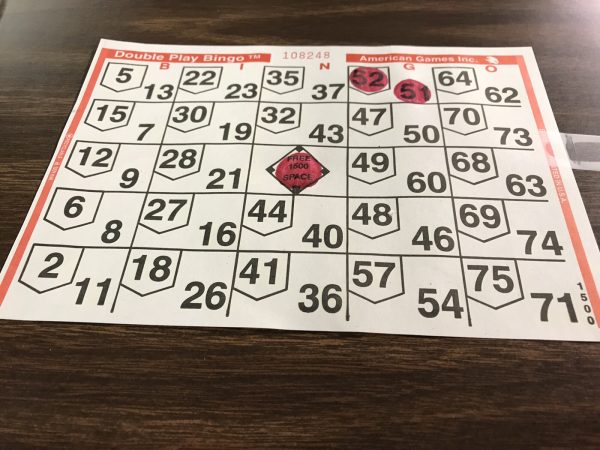 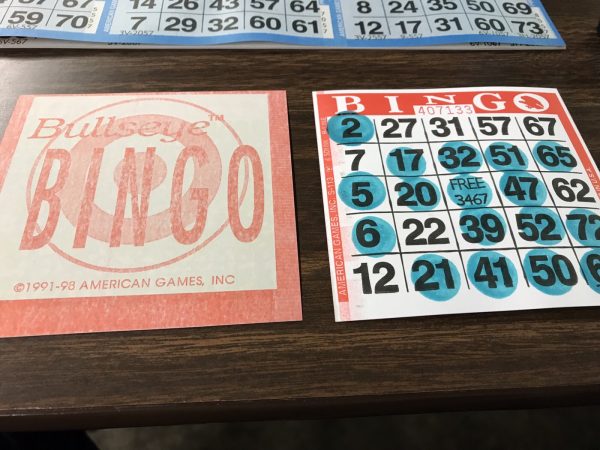 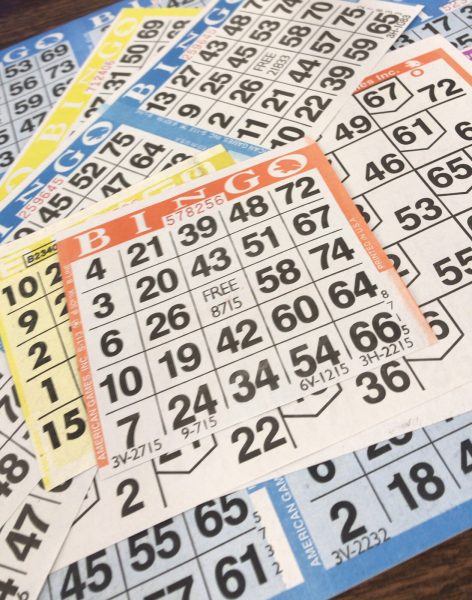 It doesn’t end there yet. There’s also extra games such as pulltabs which cost $1 each. They are little mini games that are played during the regular session. You buy a card for a dollar and pull the back tab off which reveal five numbers (or sometimes free spaces if you’re lucky unlike me). Then it’s played like regular bingo. There are multiple different pulltab games offered throughout the evening. I buy them all the time even though I have never ever won in all my years of playing. I’m what you would call “a sucker”. 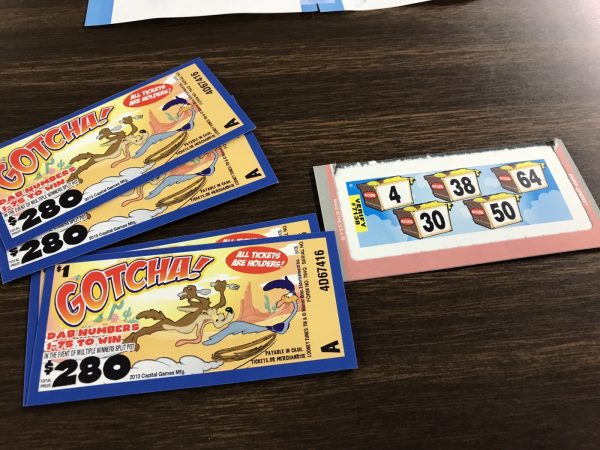 Usually the regular session will end around 10-10:30pm. For those wondering if kids can come, I haven’t ever seen some “official rule” on it but I’ve seen plenty of kids there. It’s not uncommon and I know the regulars sometimes frown upon it but I’ve even seen kids 8+ play the games before.

There are some courtesy rules you’ll want to be aware of. Some of these are common sense but there are some people who lack it and need to be reminded:

You’d be surprised (well maybe not) how many people can be rude to the people working. I don’t think they realize the staff are mostly volunteers who are there to help raise money for their particular cause. I’ve seen people twice my age start to yell at the bingo callers for one reason or another. It’s weird but some bingo players treat it as if it’s their main source of income.

If you can be respectful and courteous of everybody there, it’s a great time. I’ve gone with family, on dates, with friends, and even by myself before and thoroughly enjoy it. My friends and I used to have big group outings and go and then celebrate after at nearby bars and it’s always been a great time.

You will want to follow Bingo Casino on Facebook to learn more. Bingo is also offered at such places like Bear’s Bingo where they have midnight bingo on the weekend along with other times, I-21 Bingo where they have it during the day and AmVet at 1827 E 47th St S. You’ll want to contact those places directly to see when those games are offered.

If you’re hungry, Bingo Casino also have 1/2 price burgers on Mondays, 50 cent tacos on Wednesday, and $1 hot dogs on Thursdays. I have yet to try their tacos so I’ll have to report back on that later.

While bingo certainly draws an older crowd, I’ve seen plenty of younger people start to play. Don’t give in to the stereotypes about bingo. It’s actually quite fun and can be enjoyed if you’re under the age of 90.