Back in May, I published a blog about moving over to YouTube TV.  After years of going back and forth with cable companies and calling in at least once a year to get lower rates, I was fed up with it. Cable companies putting all their focus on attracting new customers instead of retaining old customers took its toll on me.

To give you all an update, I signed up for YouTube TV in May. I officially canceled DirecTV in June. So for the last few months I’ve strictly been watching TV through YouTube TV.

Over the course of those few months, my TV watching has gone down significantly. I’m not sure if a lot of that is correlated with the lack of summer shows but I feel that its been a good thing. Of course the bulk of my TV watching is in the fall when many popular shows return but I have noticed less and less desire for me to watch TV. But when I do want to watch, YouTube TV’s fantastic DVR and shows on demand options are all I need.

If you need a reminder on everything. YouTube TV cost $40 a month plus tax. In it you get over 50 channels and have the option to add some premium channels. Right now it’s basically Showtime for $11 which is higher than some competitors. There’s no option to add HBO but I’ve been subscribing to HBO Now as well. Here’s an infographic on the channels available. 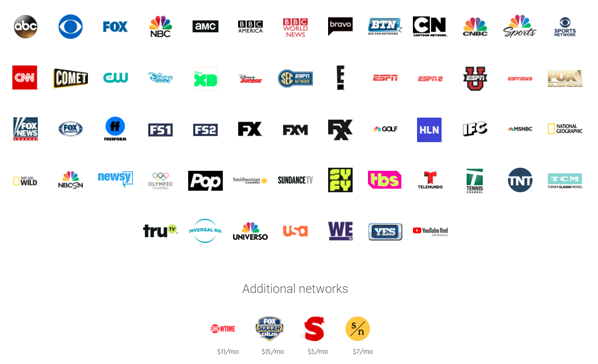 For $40, you can share your account with up to six people but you only get three active simultaneous streams at once. I’ve split those three simultaneous streams with a few friends and have so far experienced no problems. There has been no lag or bandwidth issues either since cutting the cord. In fact, all three of us would say it’s been a really phenomenal experience. To the point, we may never go back to cable.

Our absolute favorite part is their DVR service as mentioned earlier. It really is superior when compared to everybody else.  Currently only Hulu TV and PlayStation Vue offer DVR service in their package with Sling TV costing an extra $5 for DVR. PlayStation Vue has restrictions and limitations on what you can record with their DVR service. Then Hulu offers a Cloud DVR that limits you to 50 hours of content or 200 hours for an extra $15. With YouTube TV, you get an unlimited amount of storage for each of the members of your account. So I have my own DVR, my buddy has his own DVR and so on. Items in your DVR stay there for up to nine months where as the competition is around 28 days of storage.

As for accessibility, my friends and I have had zero problems watching YouTube TV. I loaded it on my laptop, iPhone, iPad, Roku, and Apple TV. The one device I wish it worked on was my Amazon Fire TV but I’ll survive.

For YouTube TV along with the $11 Showtime addition, my friends and I are splitting roughly $54 three ways.

The verdict for us since we switched has been a HUGE thumbs up.