Ever since I turned 30 many years ago, I made it a point to make great use of my time when traveling. Anytime while visiting a city, I want to immerse myself and do everything possible without wasting a minute. A couple of months ago, a trip to Chicago was in the works. I’ve been to Chicago a few times and have tried all the popular pizza restaurants, so I wanted to change it up this time and visit various eateries in hopes of delicious food. My girlfriend and I spent considerable time researching where to eat and constructed a food itinerary that I would love to quickly share with all of you if you ever decide to visit the wonderful city of Chicago.

Rick Bayless is an award-winning chef and Frontera Grill is a James Beard award-winning Mexican restaurant. After three visits, I was finally able to make it out to Frontera Grill. With no reservation, we were fortunately able to find a couple of seats at the bar. At the recommendation of our server, we ordered the Duck Breast, Oaxacan Chichilo which is a wood-grilled duck breast with mole chichilo, pickled chile de agua, grilled green beans, and rustic mashed red beans along with a Poc Chuc which is grill-seared slices of pork loin, ember-roasted onions, tomatoes, avocados, Napa cabbage, black bean soup and spicy Habanero sauce.

Ironically, the first restaurant we visited was also the least liked of them all. The food had a strong char flavor to it which was the prominent feature of the meal in each bite.

Next door to Frontera Grill is another Rick Bayless restaurant, XOCO. At the recommendation of many, we stopped in briefly to get some churros. They are offered with three different dipping sauces of your choice. Our favorite of the three was the strawberry vanilla ice cream. Holy cow that was some of the best ice cream we’ve ever had. I’m regretting not ordering a couple of tacos while there. 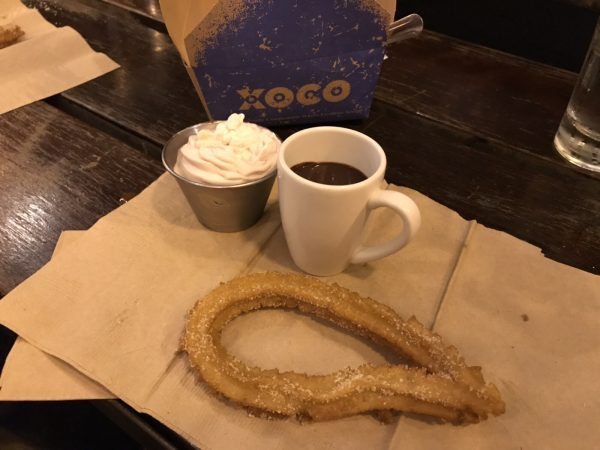 Although our evening was ending, I had to stop by Portillo’s and get a hot dog. We passed on Italian Beef sandwiches as I’ve had plenty of those on previous trips. This place is open late and gets packed but the lines move fast. 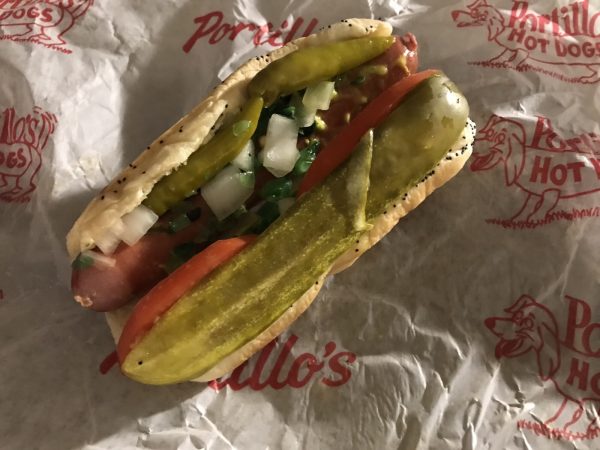 My girlfriend loves donuts, and she noticed that Stan’s Donuts was close by our hotel. We ordered the maple caramel bacon pecan bar and the orange old-fashioned. Both were incredible. She was in heaven. 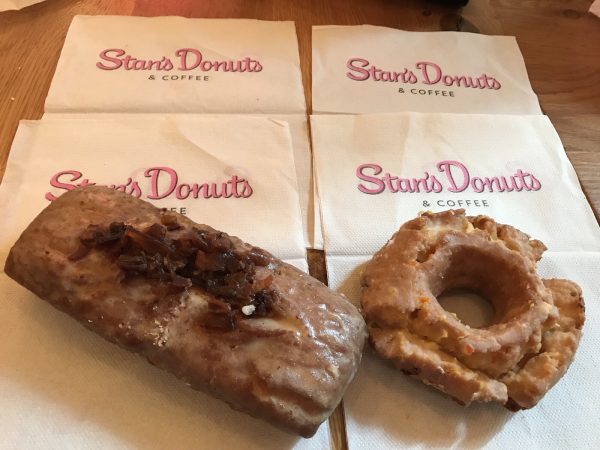 While walking the streets of Chicago after Stan’s Donuts, we happened to walk by The Purple Pig right as they were opening. We had plans to stop by for dinner but this place does not take reservations. Seeing how long the line was, we figured we might as well go in for lunch literally within 30 minutes after eating Stan’s Donuts. It was worth it.

The deviled eggs cost $8 a piece. We ordered two of them and had zero regrets. They are deep-fried and amazing. My dining partner called them the best deviled egg she’s ever had. For the rest of lunch, I had the smoked pork tongue which to my surprise consisted of just three little pieces of tongue. While delicious, this dish probably wouldn’t have been something I ordered. Fortunately, this was right after donuts, so I wasn’t too upset. We also had the Porschetta sandwich which came with house made kimchi. Now this was a dish that put us over the edge. It was marvelous and the last meal we would have for a while.

On a whim, we happened to pass by Magnolia Bakery while walking around. We saw that they had banana bread pudding and German chocolate caramel cheesecake. Somehow, someway, we made room in our stomach for these treats. Both….phenomenal. 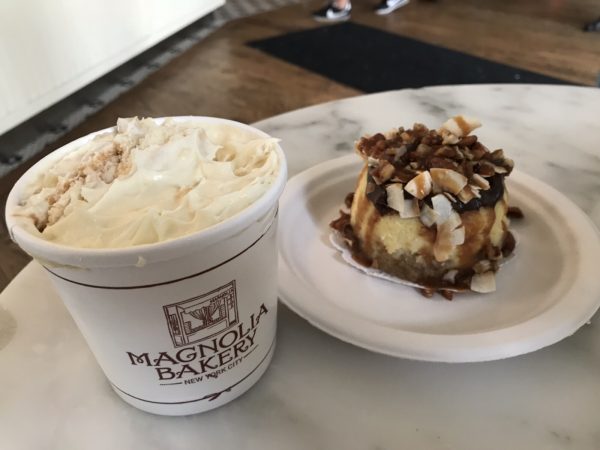 Our dinner reservations weren’t until late so we stopped into the Slurping Turtle for a quick, light dinner. What was supposed to be a quick light dinner turned into simple spicy salmon sushi for her and a heavy but wonderful bowl of ramen for me. You can’t go into a restaurant that specializes in ramen and not get ramen, right? I ended up getting the Tan Tan Men bowl which consisted of pork belly, meatballs, pork, bean sprouts, bok choy, egg, scallions, chili flakes and sesame seeds. It was advertised as spicy and definitely was. 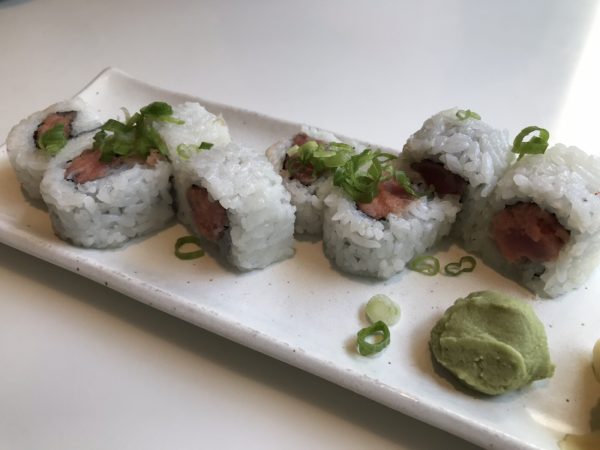 Girl & the Goat was a restaurant we had to make reservations two months out. The earliest they could get us in was on a Sunday night at 10:45pm. This was the true gem of our entire Chicago dining experience. I’ve had oysters in many cities and these were the best ones I’ve ever had. The ponzu mignonette was a fantastic pairing with the oyster. I should have ordered a second round. This was my favorite of all the dishes.

The duck tongue was also amazing. This included duck tongue mixed in with tuna and black bean poke. We both loved this dish and it ranked as one of our favorites. The goat carpaccio, while not a favorite of my girlfriends, I enjoyed. The next dish was the wood oven roasted pig face which as seen below has two pictures, the before and after. This may have been her favorite dish. It was almost like eating the best breakfast in the world. Our last entrée was crisp braised pork shank. By this time, we were really starting to get full. It didn’t help we had what felt like twenty meals in the past 24 hours. The pork had a crispy outside but was tender on the inside. We tried to finish it but failed.

Then our server gave us a dessert menu and we somehow found some room. We tried the blueberry bourbon baba. This also had bourbon ice cream, whipped cream and blueberry jam. To no surprise, we had zero problem finishing this.

The service and food were beyond perfection here. Our expectations were so incredibly high and they surpassed it.

There was a little breakfast restaurant not far from our hotel that we were able to get reservations for via OpenTable. I was concerned the quinoa cakes wouldn’t be good but ordered them as they sounded unique. I was glad I did. Some restaurant in Wichita needs to mimic this dish ASAP! My girlfriend loved her pancakes and found them to be light and fluffy just like the name suggested. Excellent start to the day!

When googling best donut shops in Chicago, Do-Rite Donuts appeared on many lists. So, after breakfast, we stopped by for “post-breakfast” if that’s even such a thing. Knowing a full second meal would make us miserable, we opted for a simple Michigan apple fritter which tasted just as we thought it would.

No stop to Chicago would be complete without an appearance at ChinaTown. It felt like there were hundreds of places to eat in ChinaTown, but we opted for some quick dim sum at Triple Crown. While the beef short ribs were nothing but fat, the scallop dumplings totally made up for it. So good, we ordered a second round of them.

Regarded by many as the best burger in Chicago, I stopped in for a burger, fries and bread & butter pickles. While I wouldn’t call this the best burger I’ve ever had, this was still a worthwhile stop. The pickles were nothing short of amazing, the fries were top notch and the burger was cooked just right with the egg being a true standout. I’m glad I was able to sneak this one in. This place also doesn’t take reservations so I lucked out on seating. 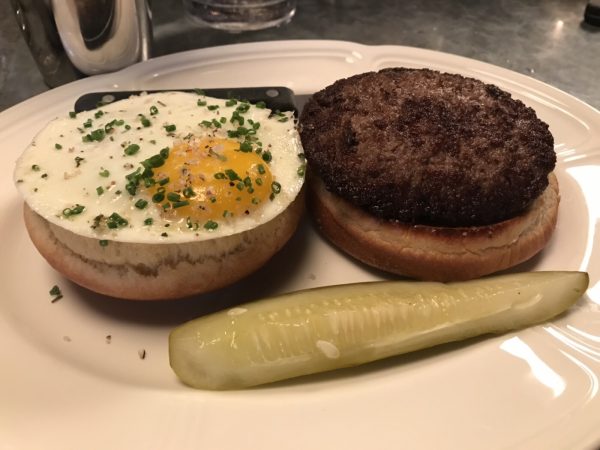 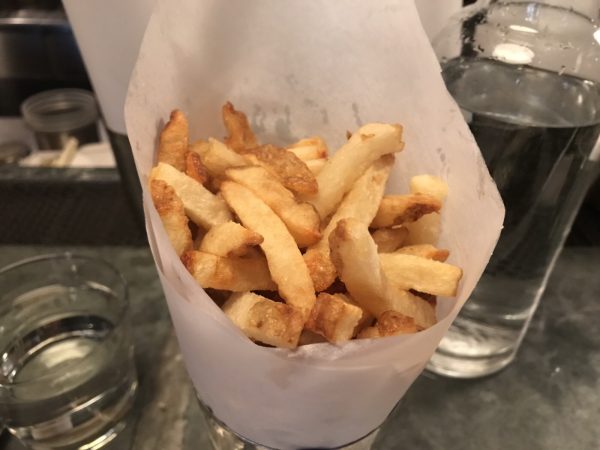 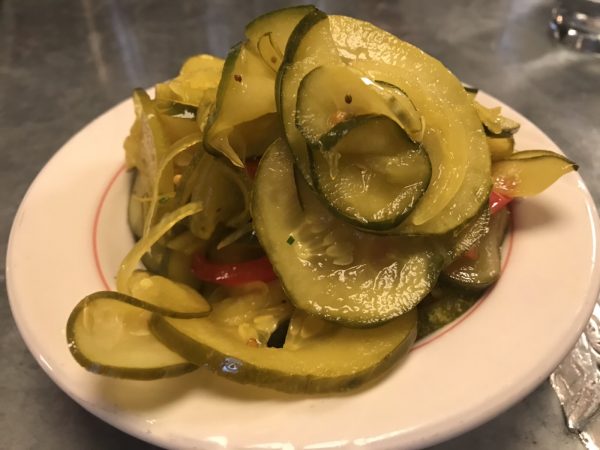 One of the oldest hot dog restaurants in town. I had to get one last real hot dog before leaving Chicago. The tamales were some of the worst tamales I’ve ever had, the crinkle cut fries were average but the hot dog was what I hoped it’d be.

The one thing I noticed about all the restaurants we went to was the service. At literally every restaurant (outside of Portillo’s), the service was excellent. Every server was friendly, accommodating and working hard to earn their tips. So many places were a textbook example of how service should be.

So that was our trip to Chicago. If you ever plan on going, feel free to use this as a reference on what to do. We worked hard to build our food itinerary list and worked even harder to complete it. We did have reservations to dine and drink at the top of the London House Rooftop Bar but those plans ended up being canceled due to the rain.

Now I know many of you are thinking, “Did you do anything else in Chicago besides eat?” Of course! We did many other things like Chicago Athletic Association, Navy Pier, walking the Magnificent Mile, Field Museum, a Gangsters and Ghost tour, The Magic Parlour magic show with Dennis Watkins, Hamilton the musical, the Bean, Hay Market Pub among other things. Chicago is such a fun city, I look forward to the next visit.

Now excuse me while I go through a food detox….