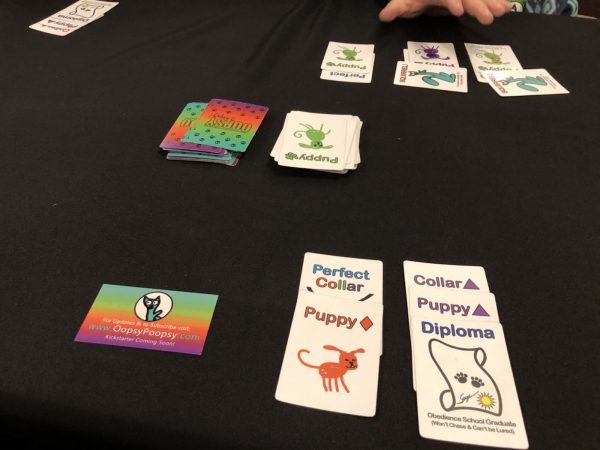 I love games of all kind. Whether it’s playing simple little card games with family, video games, or complex strategy board games with friends, I love it all. The people over at TsunamiCon, the premiere gaming convention in Wichita, kindly invited me out this past weekend. It’s a great chance to try and sample all sorts of games. There are even people on hand to walk you through how to play the games. It’s quite fascinating and an event I’ll have to try to make it out to every year.

At this year’s TsunamiCon, my friend and I were able to meet a local family who was showing off their game. Funny story actually. I heard about them before from my brother. I even reached out to Instagram to see if they were going to attend TsunamiCon. They wrote back telling me they never heard of the event but reached out to the organizers and planned to be there.

I finally had my chance to try out Oopsy Poopsy, a card game created by a local 5-year-old and engineered by her father. 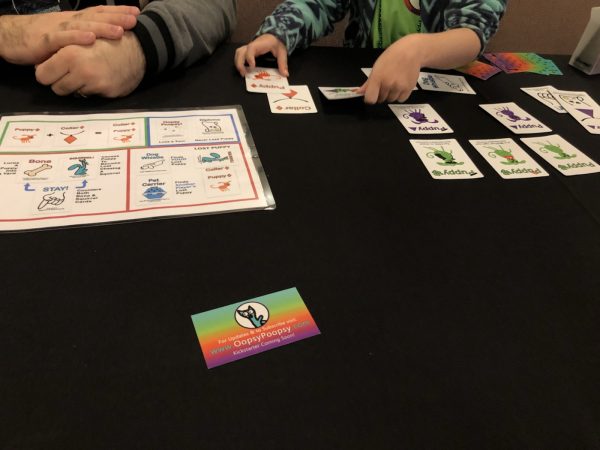 When we arrived to TsunamiCon, we signed up for the demo of Oopsy Poopsy. We then see a father and daughter combo walking in and immediately knew it was them. We all took and seat and they started telling us the story of the game. Then 5-year old Chloe Pritchett learned of a game made by a 6-year old. She then set out to create her own game. The next night her father, Jeff, found her drawing a bunch of puppies and other items on sticky notes.  Fast forward and now Chloe is 6-years old and demoing and selling her card game to the masses.

Chloe and her father explained to us the rules of the game (a video is available at the end of this blog that explains it). It was very simple……so simple a 6-year old was explaining it to us with the help of her father. Soon after, we started playing a game. We were all hooked. Chloe, Jeff and a few of us all played a round of Oopsy Poopsy that lasted about twenty minutes. The game was getting heated but in the end it was Chloe who beat all of us. She even told us not to take it easy on her at the beginning. I didn’t. I was out for a championship but failed miserably.

As I mentioned earlier, it’s simple but yet offers enough in the way of small bits of strategy that adults can enjoy. At home, we play games like SkipBo, Phase Ten and Uno often with the kids. Oopsy Poopsy was fun enough that I could see adding that game into our rotation. So much enough that I headed over to https://www.oopsypoopsy.com/ and pre-ordered a copy of it for $20 that evening.

That’s right, I had to pre-order it because the current stock of the game all sold out. The next batch of orders are expected to be shipped in Mid-November. So if you want to support Chloe’s fun game, now is the time to order. I had to make sure to let Chloe know too to autograph my copy. How often do you get to meet the designer of a game AND have it signed?

Now I’ve introduced Oopsy Poopsy to you, the readers. Next up, I’ll be showing the game off to my family just in time for Thanksgiving.

And lastly, here’s the official rules on how to play as seen on their YouTube channel.