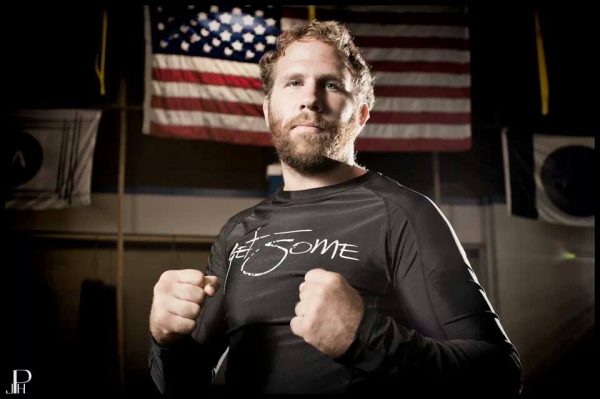 For our latest guest in the Wichita By E.B. Q&A Series, we head out to the world of mixed martial arts. I’ve always been fascinated by it and occasionally watch the fights with friends on PPV. I remember watching Royce Gracie, Ken Shamrock, Tank Abbot and Dan Severn in high school.

Which brings us to our guest in the Q&A Series. He’s from Derby, KS and made his professional mixed martial arts debut in February of 2010. He is currently signed by Bellator and also owns Evolution Fighting Championship. He is David Rickels or as some of you known him as “The Caveman”.

Eddy: David, Mr. Rickels, Caveman, guy who could take me in two seconds, I’d like to welcome you to the Wichita By E.B. Q&A Series. As we start off all sessions, could you tell the readers a little bit about yourself?

David Rickels: I was raised in Derby KS and graduate in 2007. After that, I jumped into martial arts right out of high school. I persued it diligently until I found a home as an athlete for Bellator MMA on the Paramount TV network

Eddy: At what point in your life did you decide you wanted to get into the world of mixed martial arts?

Rickels: Well I had a good friend of mine Scott Miller who introduced me to “Pride Fighting”, a well known japanese martial arts promotion, that held fight tournaments. They did grandiose style walkouts and full contact fighting.  This was at the age of 13/14. I fell in love.

Eddy: So at that point you knew what you wanted to do and set out to achieve those goals. Somewhere along those lines, the nickname Caveman came about. What were those origins?

Rickels: Like any good nickname, its given to you. I feel like you should have to earn your nickname from your peers. I had a very aggressive fight style. An uncanny ability to handle punches well and some shaggy blonde hair to match a scraggly beard. They called me caveman once and it stuck. 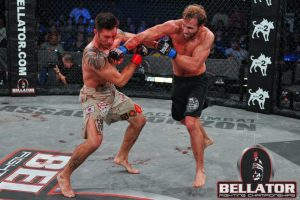 Eddy: You recently just came off of a win at Bellator 210. Your record is now 20-5. Of all those bouts, which one sticks out to you as the most memorable. 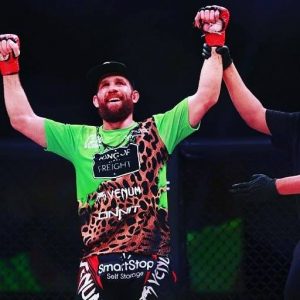 Eddy: What some people may not know if you have the third most wins in Bellator history. That’s incredible. What’s next for the Caveman? When can people expect to see you next?

Rickels: I’m a staple in Bellator, I’m essentially a made man lol. I’ve put my time in, never turned down an opportunity, and had some very exciting fights. I don’t plan on fighting anywhere else. Bellator has treated me great. I’ll fight again next year sometime. Hopefully in the first quarter of 2019.

Eddy: So when you’re not fighting, you obviously need to train and prepare. Do you do that here in town?

Rickels: I train at a gym here in town called JMTK. My coach Andy Zerger and he is the lead instructor there. We are located within the Genesis on west 13th st.

Eddy: One thing I love doing is traveling around the city and just experiencing all the different things there are to do. There have been many MMA events at the Kansas Star Casino. It dawned on me, I’ve never been to one and I’m sure many readers are in the same boat as me. I certainly plan to come out to one in the future. For those like me who have never been to an event, what can they expect to see and experience? 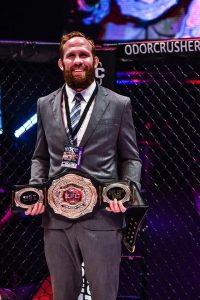 Rickels: I am actually co-owner of EFC (Evolution Fighting Championship). We do 3 to 4 shows a year at the Kansas Star Arena. I would say anyone who enjoys watching the fights on TV should definitely try to experience a LIVE MMA show. One thing I would say is do not skimp on seats. Hearing the fighters grunt, slam, and smash each other up close is very intimate and powerful. You can see a lot more when you’re up close. The energy is incredible.

Eddy: That’s awesome, you can definitely count me in. As with any guests, we discuss restaurants. Being from Derby, you obviously have a lot of familiarity with the restaurants in town. Where are your favorite places?

Rickels: Bonefish is definitely my go to spot for date night. I could eat 4 orders of bang bang shrimp any day. Other than I’m a big fan of tacos and pho. For tacos, Molino’s and for pho, Saigon Bistro.

Eddy: How can anybody pass up on tacos and pho? Well once again I want to thank you for taking time out of your day to participate in our Q&A session. It was great to learn a little a bit about what you do and how you represent our city.

If you know of anybody that would be great as a guest of the Wichita By E.B. Q&A Series, feel free to email me at [email protected]. I’m looking for anybody who impacts Wichita in any sort of way whether they be business owners, restaurateurs, volunteers, whomever. Thank you!