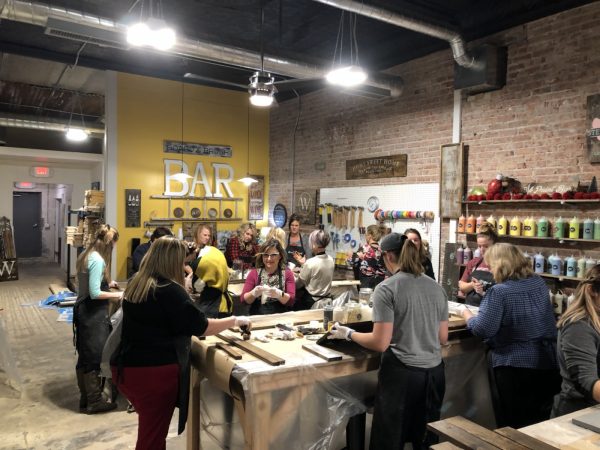 Have you ever heard of Board & Brush: Creative Studio? It is a DIY woodworking studio. Board & Brush takes it beyond that and turns it into a fun experience. It’s one where you can have a few drinks with friends, pick the wood sign you want, and learn step by step how to do it. All the tools and supplies you need are at your disposal.

I’ve seen many pictures of friends there and wanted to see just how much fun I could have there myself. Here I’ll walk you through my entire evening and all the trials and tribulations of woodworking.

I should start with the fact that I am not a handy person at all. I’m the last person my friends and family will call when they need anything done. They’ll call me to fix their computer, recommend them a restaurant, plan a party, or make them a webpage. But if they need a picture hung or something that requires manual labor, my name is an afterthought. Some people may consider me a tool which is ironic cause I know nothing about them. So doing this DIY woodwork was completely foreign to me.

The first step at Board and Brush is to make your reservations at their website and pick the project you want to do. A basic pick-your-own project will cost $65. There are no additional costs after that. I left my girlfriend in charge of picking the projects. I wanted to come dressed in overalls and a hard hat but was advised against that.

When we arrived, they had nearly everything ready to go for us. The walls were covered with examples of what could be done. 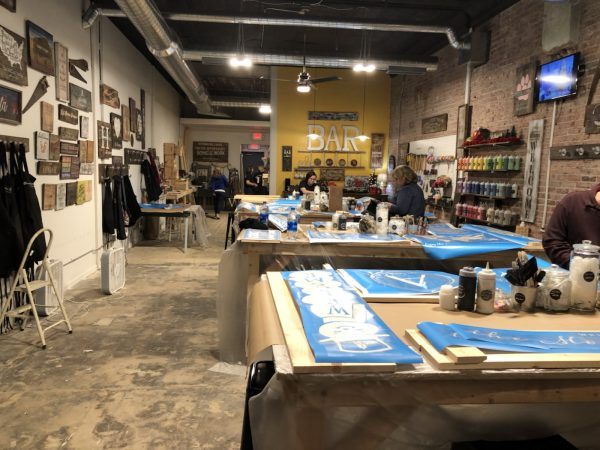 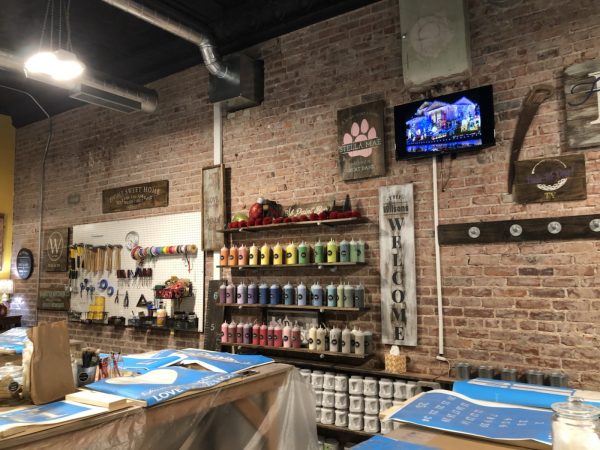 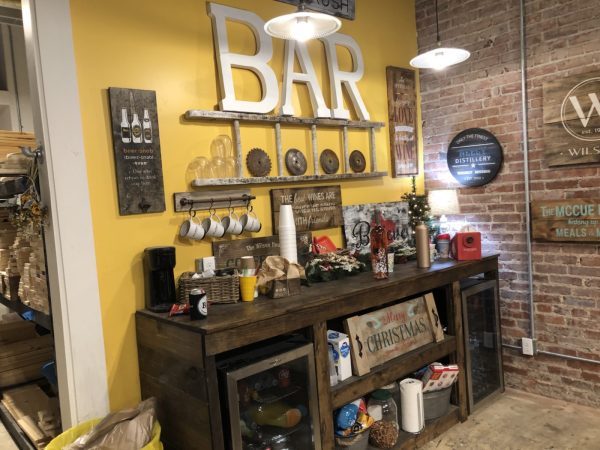 Once we were settled, the first thing we did was grab an apron. 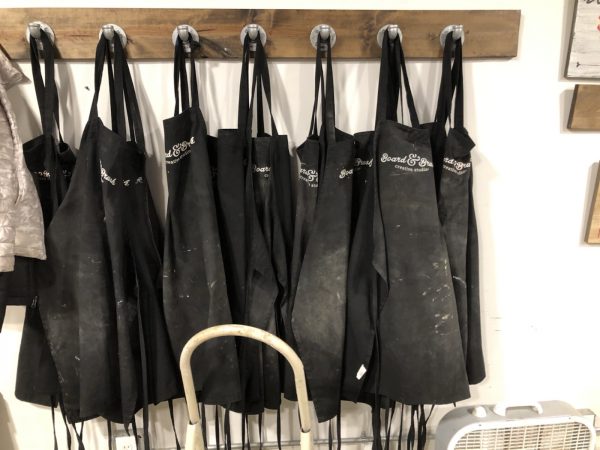 Then we made our way to our stations where all the wood, stencils, and other supplies were awaiting us. 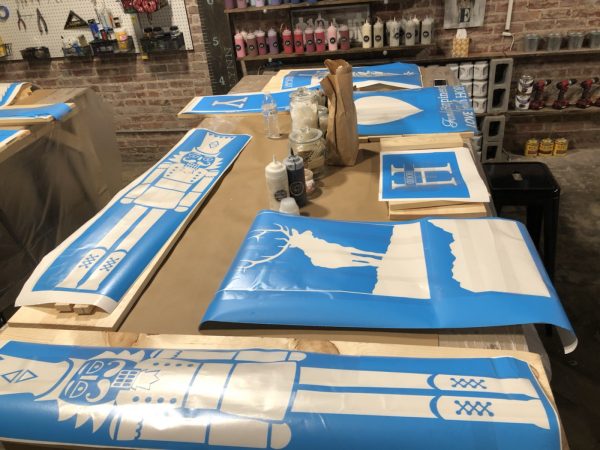 The project I was working on that evening was a card holder. The first 15 minutes or so were spent sanding and then using a hammer to distress the wood if you chose to do so. Even after the instructors and my girlfriend explained to me the point of distressing the wood, I still didn’t get it. Regardless, I gave it multiple whacks while people looked at me concerned I may hurt myself. I probably looked like that random infant at a restaurant who slams their silverware on the table. 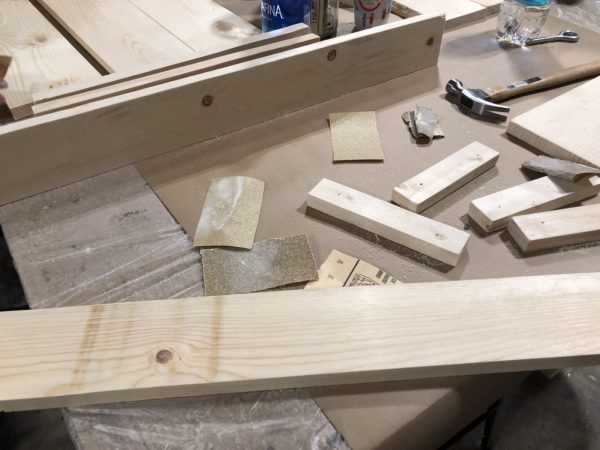 Once we were done with that, the instructors showed us the different stain options and color combinations we could choose. I think I went with ebony. 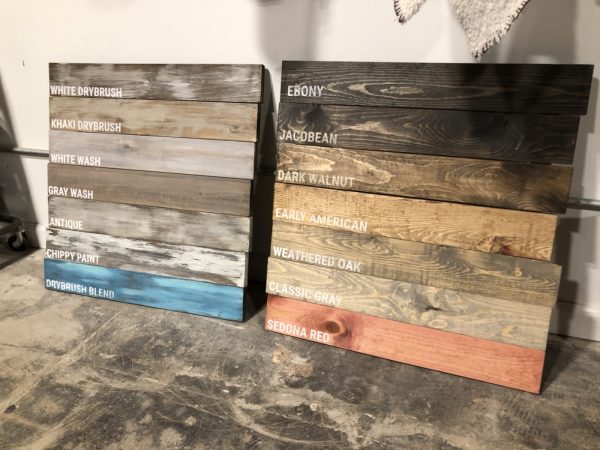 I then stained the wood and was so proud of the transformation that was done. I felt so accomplished and thought I was close to being done……. I was wrong. 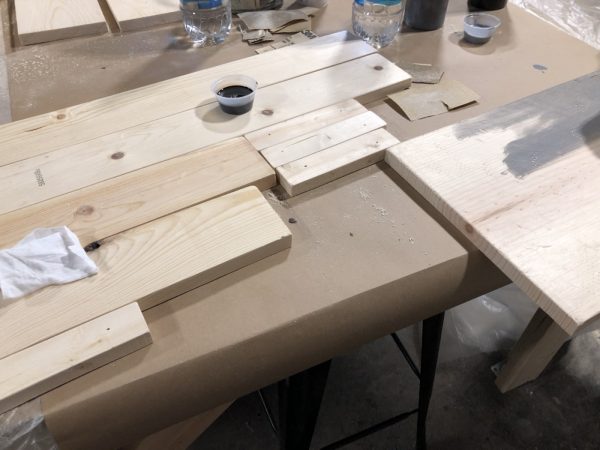 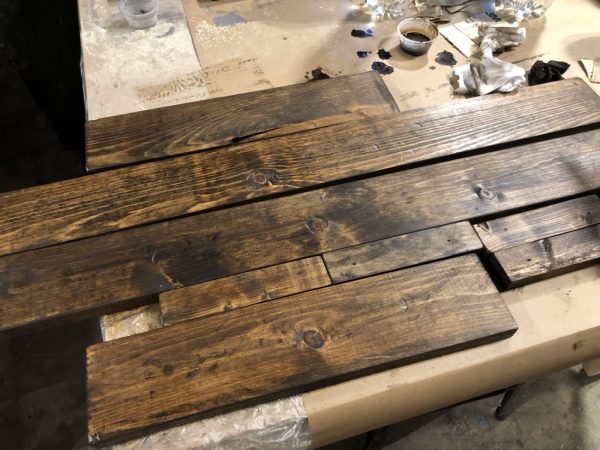 The next step involved was adhering the stencils to the wood. This took me multiple times to get it close to even or centered. 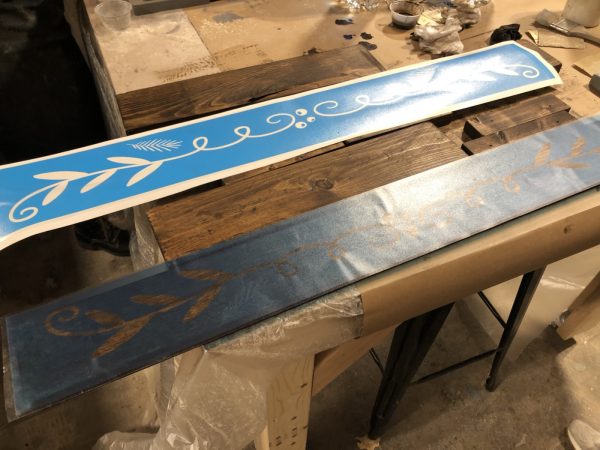 Once that arduous task was completed, I had to paint it. 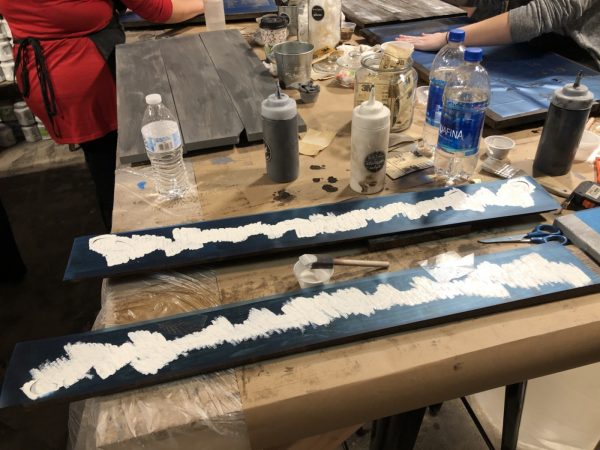 Once that was done, I removed the stencils. 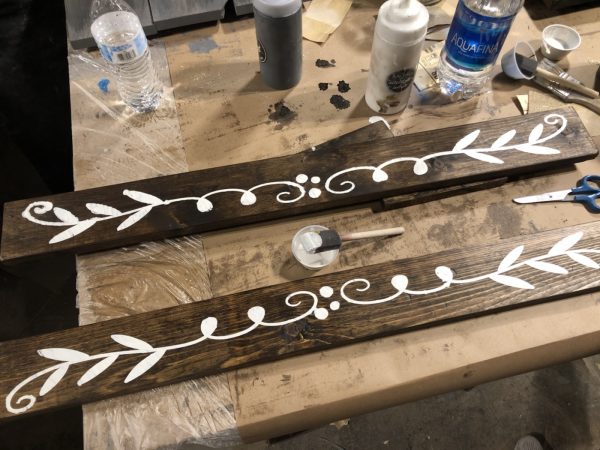 Most people moved on to the next step. Not me, I got a little too carried away with the paint. While others use the proper amount of paint, I went crazy and smothered my boards so I had to set it in front of a fan to dry. This was a great way for me to take a break! 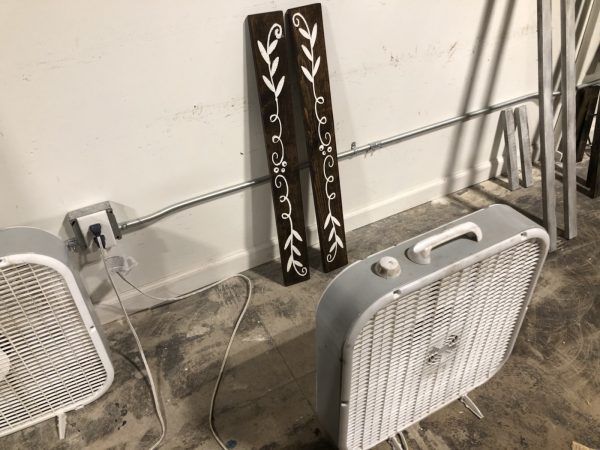 Once the paint dried, I used a knife to carve out portions where there was too much paint and then waxed it. Finally watching the Karate Kid paid off….. wax on, wax off. 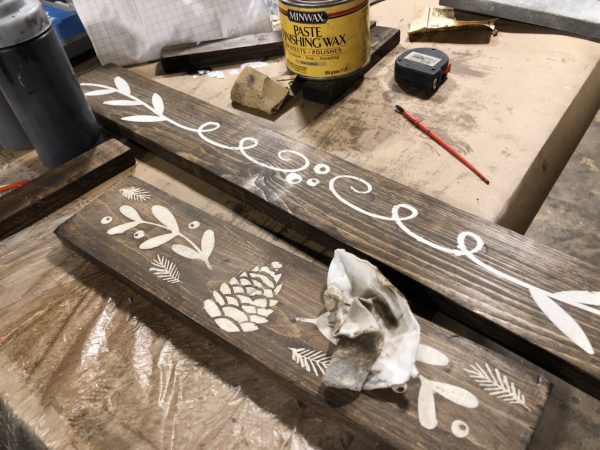 Next step involved me attaching all the wood together with a drill. This was where I messed up. I didn’t get a picture but had the wood pieces assembled incorrectly when I put it together. It was a great laughing moment for all. But after a second time, I was able to get it put together properly. 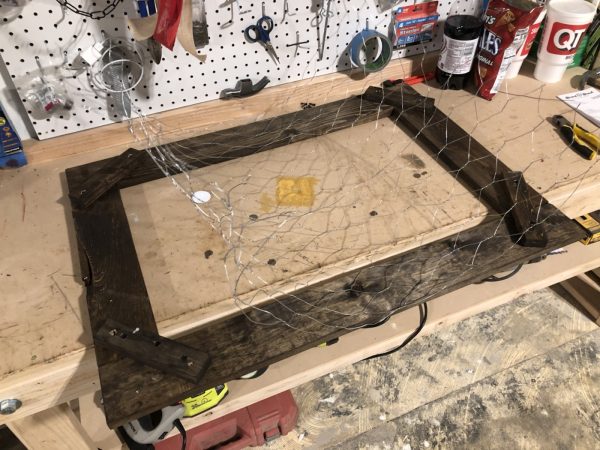 Once I stapled the chicken wire down and cut it to fit, I was finally done after three and a half hours. 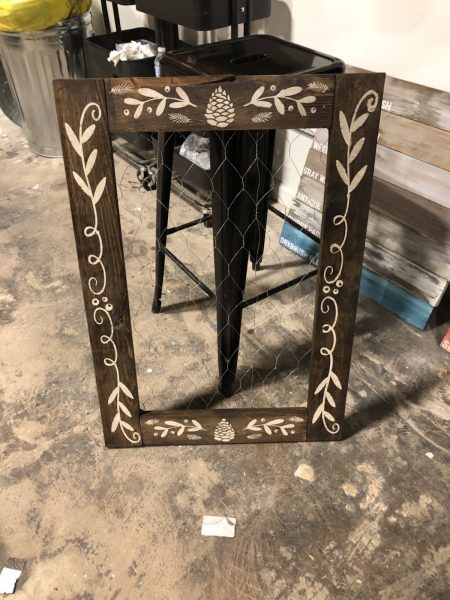 That three and a half hour time is probably on the longer side as my girlfriend finished 30 minutes to an hour sooner with her project. If you aren’t inept at life like I am, it should take you well under three hours. Once we were done, her sign received so many compliments which was funny because I was standing right next to her with my sign. I stood there and received silence…….. 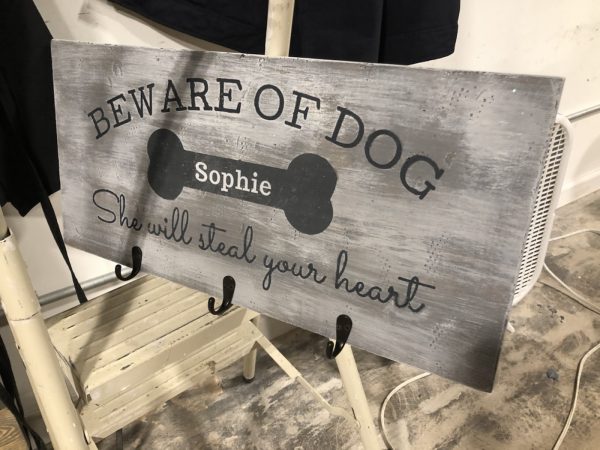 We left with two wood signs, zero broken fingers, and a night where my girlfriend probably questioned if she should be with a handier man. It was an extremely fun evening where we got to do something a little different than the norm. We are already looking at designs to go again in the near future.

The staff there was so fun and helpful. It took them maybe two seconds to realize I was out of my element but was there for me every step of the way.

Board & Brush made for a great date night. There were other groups there doing team building and family outings. If you’re curious, it’s for ages 16 and up but they do have family theme nights where kids can pick projects and participate as well.

I can’t wait to go again….. in the meantime, I just need to receive some Christmas cards to put my card holder to use.

Have you gone? What do you think? Feel free to post in the comments your thoughts!

The food at Beaches Resort at Turks & Caicos