There’s a timeless and classic dish served throughout Wichita. It’s the ultimate hangover cure and might be the most mispronounced soup of all time. Of course I’m talking about the popular Vietnamese dish called pho. By now I hope you’ve had a chance to try it. If not, you’re in luck. This city is loaded with some amazing options. And fortunately for you, I have recommendations right here if you’re asking yourself, ‘Where is the best pho in Wichita?”

Over the past few months, I stopped by 25 different restaurants in Wichita to try their pho. My reasoning for choosing 25 was simply because there were 25 restaurants in Wichita that served it. I wanted to do this because of how many times I saw those “Best Of” lists that included only restaurants that were paid partnerships or advertisements of the publisher. Or lists where the writer either didn’t go to a single place, only sampled a limited subset or better yet, had never been to Wichita. If someone was going to make a list of the best whatever in Wichita, shouldn’t they get their ass out to every available option in town to keep it completely fair and inclusive? Seeing as how not a single publication in town was willing to do it, I said why not just do it myself?

The ranking you’ll find below is not scientific at all. It’s totally subjective based on my own first hand account but it was thorough and included every option in town I could find. I went to each restaurant and made my judgment based mostly on the broth, noodles and meat. A few other factors were also taken into account like service and price. Pho is a quick dish that shouldn’t take long to prepare. Most great places have the broth already ready to go. And no bowl of pho should cost more than $10 for a regular or sometimes even a large size bowl. It’s like charging $3 for a pop at a restaurant. There are too many great places in Wichita you can get a delicious bowl for around $8-9.

Remember this is just one person’s opinion. You don’t have to take it as gospel or agree with it. We all have different palates so I certainly don’t expect 100% of people reading this to treat it like gold. Everybody has their favorite but I certainly encourage you all to use this as a resource and visit restaurants you may not have known about.

As for my rankings and what I want in pho, I like my broth to be rich in flavor; aromatics are extremely important. Before dressing my bowl, I would always take many spoonfuls of the broth to take it all in. Meat was also important, most times I would try to order the house special which allowed the restaurant to show off their best meats. A big no no was when our bowls would arrive with a thick layer of grease over the top of the broth. Pho is meant to be soothing and this was the most soothing blogging experience I’ve ever had.

Instead of listing 1-25, I decided to break the ranking up into tiers. The best pho places were in Tier One and so on and so forth. So without further ado, here’s how I ended up with the rankings. 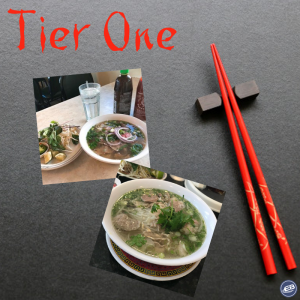 Tier one consisted of the two restaurants I considered to be the best in terms of service, price and some really good pho. Both of these places have long been serving the city and the ones I have frequented the most. On each particular visit particularly for this adventure, I was taken care of quickly. Their broth was everything you’d want in your pho: hot, filling, comforting and the best version of quintessential Vietnamese noodle soup I grew up on. 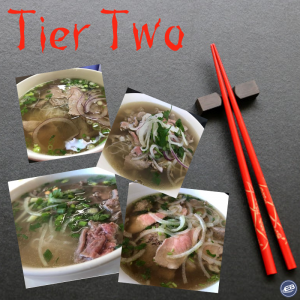 Tier two were fine options for pho. There’s not really a knock to be had on these restaurants, it’s just that they weren’t my top two favorites in town. Would I go recommend any of these restaurants to my friends and family? Yes but if I was asked what my favorite pho was in town, these four would miss the cut. There’s no shame being in tier two. 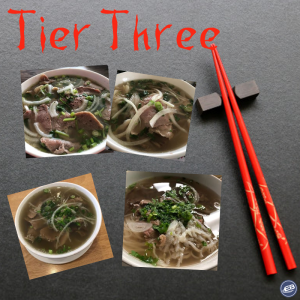 Tier three were the restaurants where the pho was good but not memorable enough to make a top 5 list at least in my opinion. Some of the restaurants had their fans in previous posts I would make but there was something that kept these places from making it into the higher tiers. Some places lacked the service quality, had too much star anise, had a fatty layer over the top of the bowl or simply felt average. These were the types of restaurants that if you’re by them, they are worth going to but not places I’d go out of my way for. 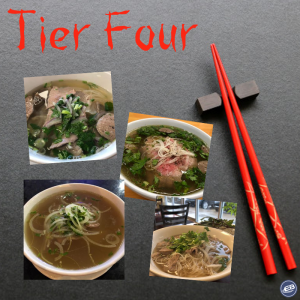 Tier four was tough because some of these places have really good food. Take Mama Nith’s Crawfish for instance. The pho they had was a crawfish pho. It was good but it’s totally different and not on par especially when comparing it to the competition of your traditional pho; it’s not as rich as there’s a fishy taste to it. I wasn’t going to include them originally but was requested by many people to try it. Kimlan is my favorite place for banh mi’s but was a little lacking on the pho. Pho MC’s lacked any semblance of service and almost dropped into tier five. Other places in this tier suffered greatly from one aspect or another like bland broth, long wait time of around twenty minutes for pho, or being severely greasy. 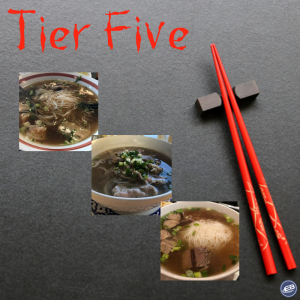 In the case of SpringRo and Promise Thai Cuisine, I’m a fan of both restaurants. The people and service there were fantastic but when it came to the world of pho that wasn’t their core capability. They were the types of restaurants that had other main staples and seemed to add pho to gain more business. For Lemongrass, I went with six others and we were not impressed. On top of their limited meat options and one size offering at ten dollars, it had a very watered down taste and probably the worst of the 25 bowls we had throughout the entire adventure.

25 bowls over four months. It was fun; it was delicious; it was one experiment I’d do all over again. I’m glad to live in a city with a strong Vietnamese culture which equates to delicious food. I’m sure by now you have your opinion on pho as stated earlier. If you have a big love of pho, I urge you all to do the same and visit all 25 restaurants and do your own ranking tier.

Until then, it’s time to decide what the next list will consist of………