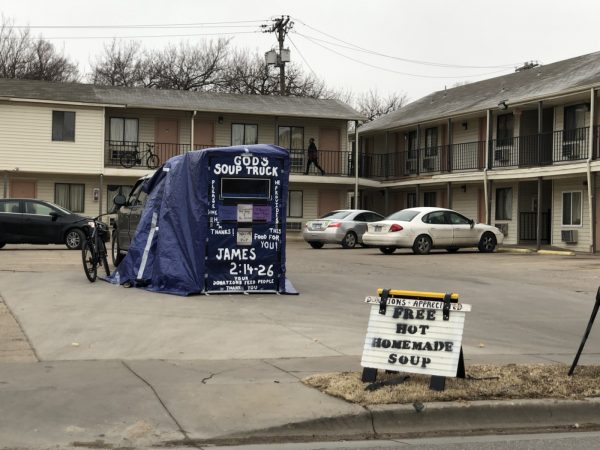 He calls it God’s Soup Truck. You won’t find it on Yelp, Facebook or anywhere else online.

Every Tuesday and Thursday around 1pm a man who didn’t want to be named parks his truck in front of a motel on south Broadway. This week, he was in front of the Country Inn at 803 S Broadway. It’s just one of many motels in a segment of the city that has seen more than it’s fair share of homeless people, drugs and prostitution.

Yet this man is willing to sit out in the cold for hours and do what he feels is best for the people. Twice a week he sits inside his little tent attached to his truck and hands out free bowls of soup, pop and water or hot dogs to those in need.

The man who sits inside is quiet and one of few words. Speaking with him briefly, he had the gentle tone of James Earl Jones to his voice. I asked him what brought him to do it and he said he just wanted to help people. He’s out there doing God’s work.

All of the food served is made himself. The Tuesday I stopped by, he had chicken noodle soup and 3 beans ham & rice soup. He offered me some but I politely declined. It wasn’t my place to take food made for the purpose of helping others.

God’s Soup Truck is a one man operation. He does accept donations from those passing by but given the area he’s at, those are far and few between.

I spoke with a couple guys sitting outside the motel who admit they’ve seen better days and they told me verbatim, “That’s some of the best damn soup I’ve ever had”. They told me about their sick friends in the community who often stop by for a warm bowl. I’m sure it’s more appreciated during this time of year.

Everybody has their own way of serving others and helping the community. He felt his calling was to feed others and he’s out there doing it.