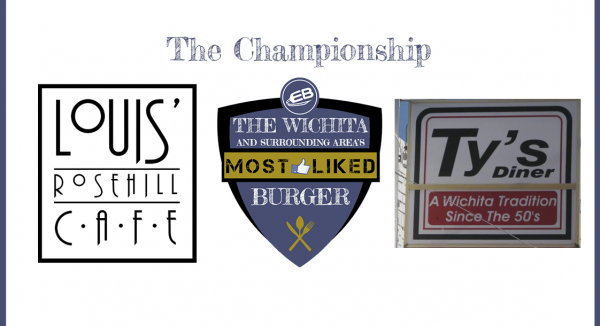 Over a month ago, I put out a public poll on Facebook to see who the Wichita and surrounding area’s “Most Liked Burger” was. I originally wanted to call it “Best Burger Bracket” but opted not to because in the end, there’s no way to decide a best burger. That’s all subjective to ones taste. Then I called it “Favorite” but didn’t feel that fit what the whole goal was.

Eventually I settled on “Most Liked Burger” because that’s essentially what any Facebook poll ends up being.

We started off with 32 burger spots and are now down to just two: Ty’s Diner and Louis Rose Hill Cafe.

There’s been so much banter, back and forth, friendly chatter, online trolling, trash talk, criticism and support for both restaurants that made it this far. I have to add in that the restaurants they beat out, Buster’s Burger Joint and Bomber Burger, had an overwhelming amount of support online as did the two finalist. Bomber Burger had over 2,000 votes in yesterday’s poll. It was even cool to see the owners of Buster’s Burger Joint and Ty’s Diner have a friendly exchange of messages after their voting concluded.

Regardless of who wins, the bracket shed light on many restaurants people have never heard of. When Bill’s Charcoal Grill lost, it caused an uproar for many. Come to find out, some people have never heard of it thus didn’t vote for them. There were people who live in Andover that had never been to (some never heard of) Timbuktu. People are still probably looking at the bracket and wondering what The 3 Amigos is. And I’m sure there are thousands of people who voted in this poll who have yet to step foot in Louis Rose Hill Cafe.

But after 26,000 plus votes casted, our finalists got to this spot behind their supporters. Ty’s Diner had the support of their long-time clients from being in the business for the longest time. Then Louis Rose Hill Cafe had the massive support of their fanbase as well as what appeared to be the entire city of Rose Hill. I have to give credit to the Rose Hill chamber and other Rose Hill businesses in the area. The shares and support they gave to Louis Rose Hill Cafe is something other businesses should envy.

Voting for the championship begins Thursday morning on the Wichita By E.B. Facebook. 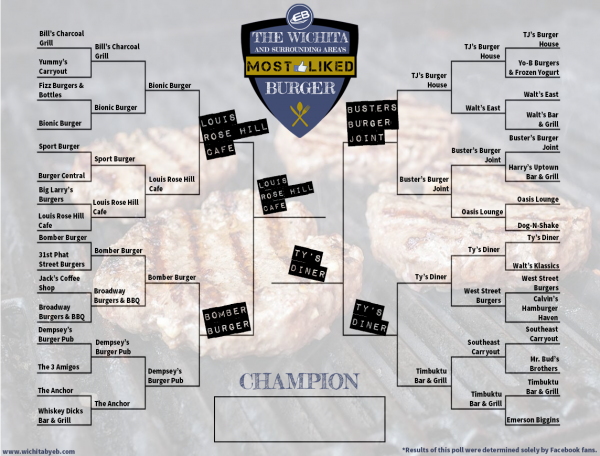 May the best burger win.