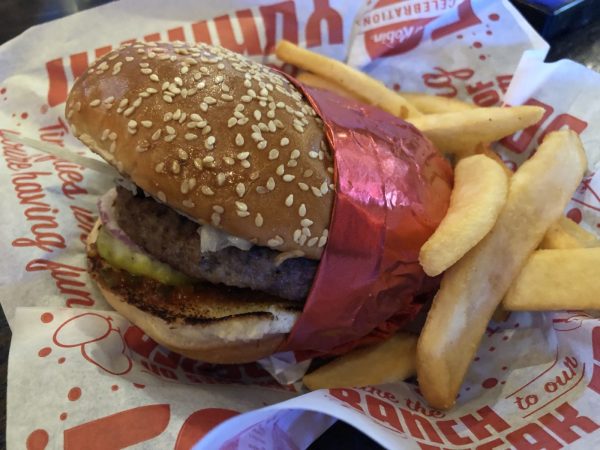 First off what is The Impossible Burger?

Here’s a basic history with information grabbed from Wikipedia. Back in 2016, a company called Impossible Foods launched with what they called the Impossible Burger which was made from materials derived from plants. It’s said to be made using 95% less land and 74% less water, and it emits about 87% less greenhouse gas than a traditional ground beef burger patty. The plant-based burger has more protein, less total fat, no cholesterol, and fewer calories than a similar-sized hamburger patty made with beef. It contains more sodium and more saturated fats than an unseasoned beef patty.

Then in 2019, Impossible Foods launched a new version of it. This 2.0 version was advertised as a “tastier, juicier and more nutritious – featuring 30% less sodium and 40% less saturated fat than their current recipe and just as much protein as 80/20 ground beef from cows.” The new product is also gluten-free, replacing wheat with soy protein. It was designed to match a regular beef patty as closely as possible.

Currently only four places in Wichita serve this burger: Red Robin, Harvest, AVI and Hurricane Sports Bar. Impossible Foods website shows official locations. Some people have mentioned other restaurants but they could be selling something else like the Beyond Burger which is different.

Many people asked me to give the Impossible Burger a try and I certainly wasn’t opposed to it. I decided to swing by Red Robin to give it a go. I asked for the burger shown in the advertisement minus cheese. The burger cost $15 and came with their signature endless fries. 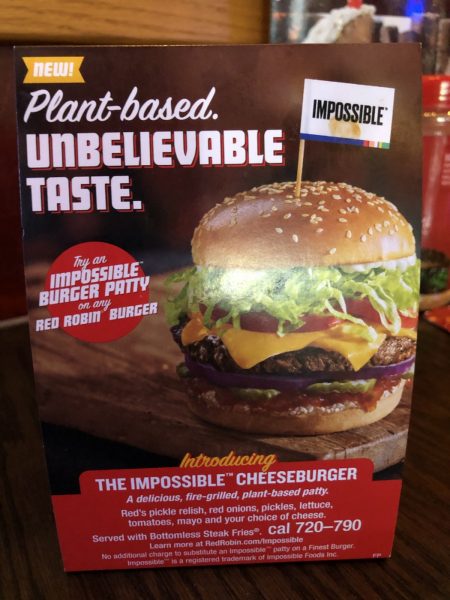 What’s funny was when I ordered it, my server asked me two questions, “Are you Vegan? Did you know the burger cost a little more than our other ones?”

Huge kudos to him. For all he knew, I could have been a misinformed customer unaware of what I was getting myself into.

Not long after this burger arrived. 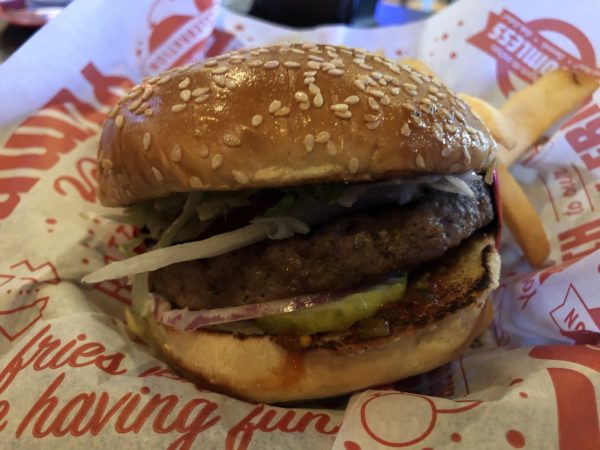 I had one regret in the process. I totally forgot to ask for just lettuce and pickles. It came with some relish and mayo inside but otherwise it wasn’t too doctored.

With the burger in front of me, I picked it up and started sniffing it as if I were some dog inside a brand new house. It smelled alright to me. It was time to put the burger to test to see if they were able to mimic a lot of the same flavors, textures, and most importantly, the satisfying quality of meat through science.

I took a big bite out of the Impossible Burger and it was certainly juicier than I expected. From a texture standpoint, it was a little more tender; almost softer than your standard patty. Part of me wonders if it was just my subconscious telling me, “Yo Eddy, this stuff is NOT real meat.”

From a taste perspective, it really wasn’t all that bad…… honestly very satisfying. Granted some of the relish and mayo could have masked the original flavor of the patty. I pulled off bits of the patty and ate it by itself and aside from the very slightly mushier texture, I couldn’t tell a difference. I finished the burger and was quite pleased.

I’ve had veggie burgers before and found them to be gross, the Impossible Burger was a million times better than that. What I really need to do next is go into one of those restaurants serving the Impossible Burger and order that patty and a regular beef patty and ask them to serve it to me while I’m blindfolded. I see a blind taste test in the future for me. Sometimes your subconscious can really mess with your mind so you can expect a 2.0 version of this blog in the future.