Not long ago, I blogged about a new pop-up in Wichita called Tacos El Tlahco that serves tlacoyo. The day I stopped by, all they had on their menu was the aforementioned dish and steak tacos. The following week, I would find out that they added something new to the menu: grasshopper tacos.

Technically, they are called tacos de chapulines. They are real grasshoppers that are toasted in lemon juice and garlic powder. I HAD to try these but I also wanted others to as well but knew nobody would, so I came up with a deceitful plan.

Megan was hungry. She’s pregnant, so she has her cravings. She wanted tacos from her favorite place, Tacos Raymundo. I challenged back saying, “Would you even be able to tell if they were tacos from there in a blind taste test?”. Knowing exactly what her reaction would be, the plan was set into motion. Of course, she said yes, so the prank was on! I told her I would go pick up another set of tacos and we would do a blind taste test. Hook, line and sinker!

I made the trek out to Mercadito Hispano Nomar, at 21st & Broadway, where Tacos El Tlahco was set up. I asked for the grasshopper tacos. They even gave me a small little cup of the insects to sample. They were crunchy and VERY loaded with lemon juice and chili powder. It had a distinct sweet chili taste to it that reminded me of chamoy. 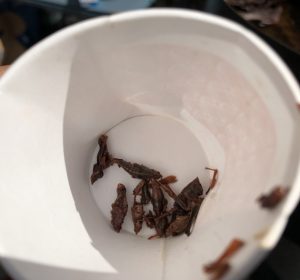 The tacos were $3 a piece so I ordered five of them and planned to involve the kids in the blind taste test. Knowing I would probably be in trouble if I didn’t get some other food, I did swing by Tacos Raymundo for some tacos as well.

Take a look at these unique treats! 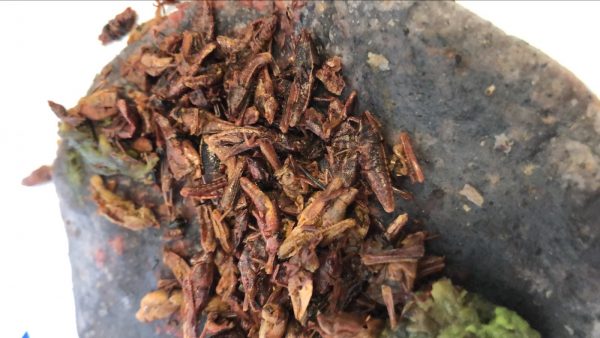 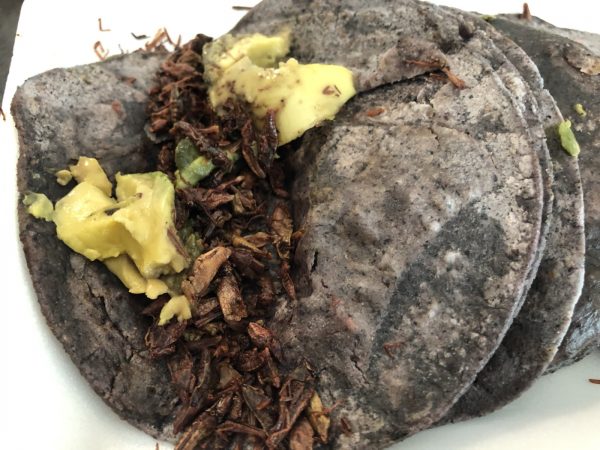 I arrived home and had everybody sit around the table. They were either blindfolded or asked to keep their eyes closed. Here’s a word for word translation of what transpired over the course of a minute:

Megan: Yeah this is terrible

Megan: (takes a bite) What is that?

Megan: (drops her head into her hand in annoyance) OK, I’m not eat it that’s gross.

Kid #1: (with her tongue sticking out the whole time) Are you therious (she probably meant serious).

Kid #1: (tongue still sticking out)… EWWWWW! I got it on my tongue!

Eddy: They are cooked grasshoppers though.

Megan: Are you serious?

Eddy: You can look at them. You can see them.

Kid #1: Ewww yeah that’s grasshoppers and you just ate them.

Megan: Are you….. Are you serious?

Kid #1: Look mom, you can see grasshoppers on my plate.

Megan: OH……….MY………. GAWDDDDDDDD! (stands up and starts making her way to what I believe were the kitchen knives)

That probably went better than I thought. Not a single one of them liked the grasshopper tacos, which I already knew would be the case. But I also knew they wouldn’t try them at all if I said what they were. We actually had talked about it a week ago and she told me there was no way ever she would try them. Famous last words….

After the overly dramatic show was over and realizing that was probably the last blind taste test they would let me do, I went ahead and tried them for myself. I had one of the tacos barebones with just the grasshoppers. From a texture standpoint, yes it was crunchy which might throw some people off while eating a taco. The grasshoppers had such a strong sweet chili powder smell to them, with a flavor to match. It was all you could taste and very overpowering. The texture didn’t bother me at all, but the flavor was way too intense. I tried a second taco with some cactus and salsa and it was so much better and toned down the original flavor of it.

I’m pretty confident the grasshopper tacos aren’t going to be for everybody, especially kids. But those adventurous eaters who love trying new things, this could be right up your alley. I also learned that it’s not good to trick a pregnant woman. She did though get her hands on some Tacos Raymundo and ate those in silence while probably plotting her revenge.

I slept with one eye open that night.