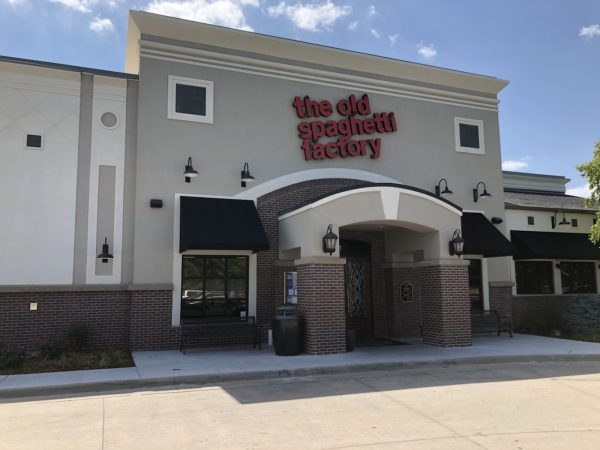 Not to be confused with Spaghetti Warehouse or Spaghetti Works, the Portland-based chain The Old Spaghetti Factory opened their doors to the public. Located in the former Fox & Hound space at the Waterfront, we gave this a go over the weekend.

This review also marked the first blog appearance for my daughter, Emery. She opted not to eat but really loved the ambiance. It was so relaxing to her she slept through the entire lunch. 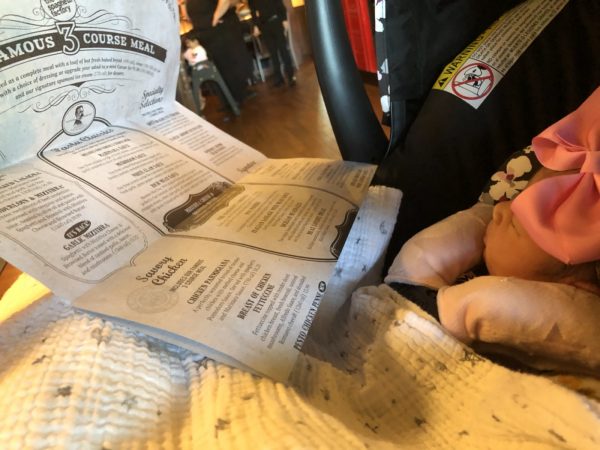 Regarding the interior, my girlfriend really loved the decor. From the light fixtures to the fabric on the seats, she commented multiple times and gazed around in awe.

Of course the trolley car was a big focal point for their opening. It seats roughly 20 people and really caught everybody’s eyes as they walked in. 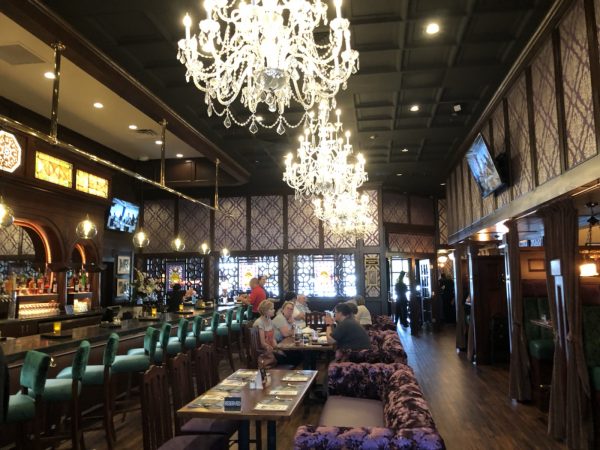 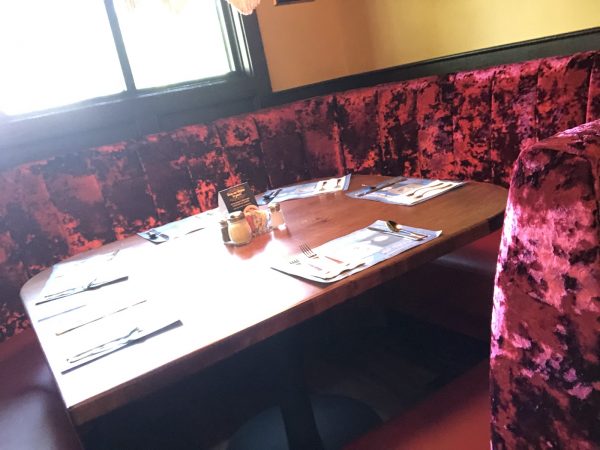 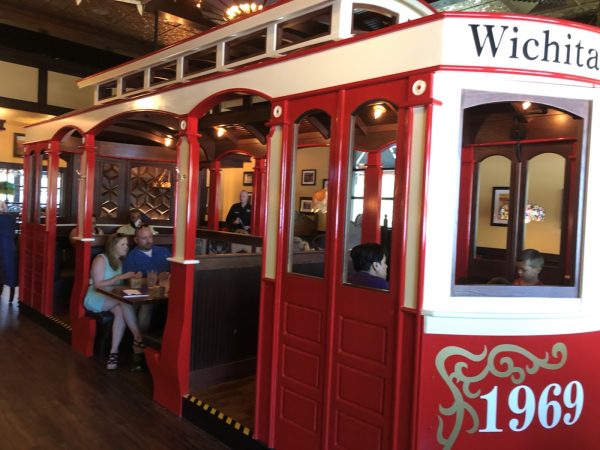 I was also joined by my brother and we had plans to really get a good in depth look of this restaurant. We started off with a couple appetizers: the toasted ravioli and fried calamari. We enjoyed both of them. They each had a good breading ratio and fried well. The pomodoro sauce that came with the calamari was a big hit with everyone; it had a nice refreshing herbal flavor that had a great aftertaste. 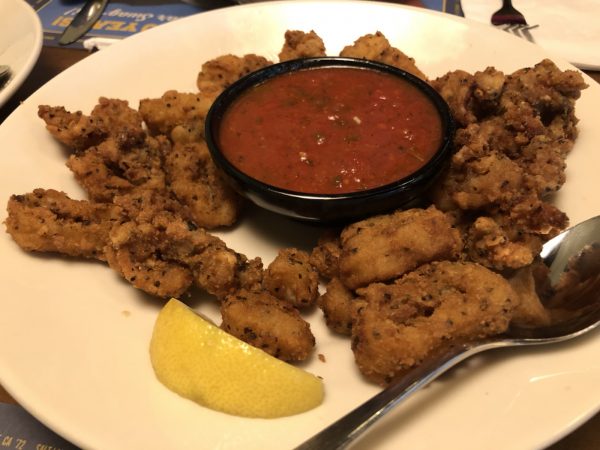 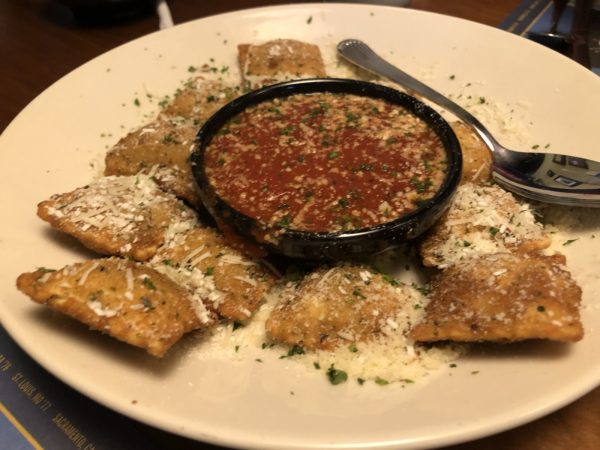 We were also given complimentary bread. And the server was telling us about mizithra cheese & browned butter; it was a special they had. We were told it was a sweeter tasting cheese and popular among many guests. He ended up bringing us a sample dish of it. The bread was fresh but everybody was floored by how good the mizithra cheese & browned butter sampler was. It was sweet but light and not so heavy. 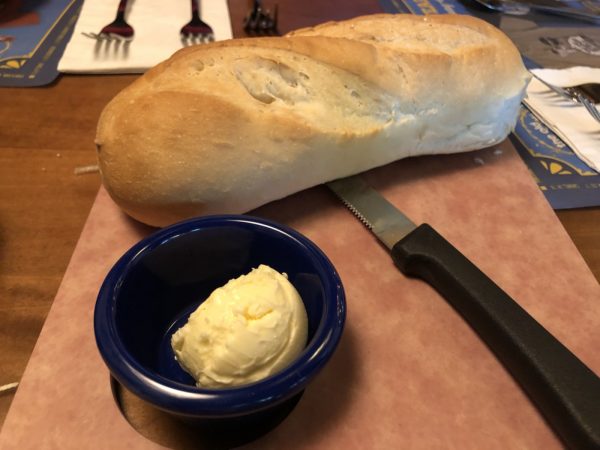 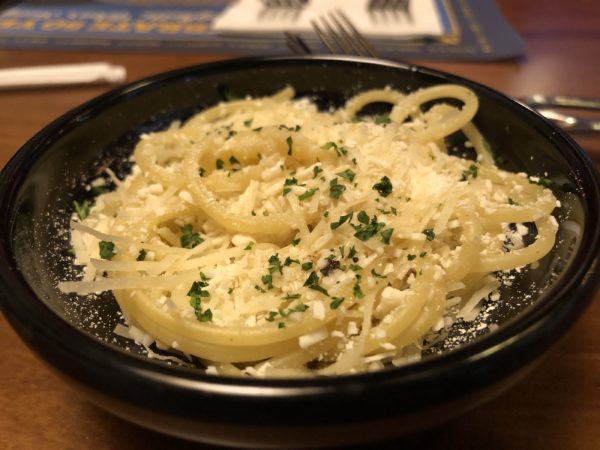 For our main meals, everything we had was a 3-course meal. It came with a soup or salad, the main dish and a vanilla or spumoni ice cream dessert.

The starters weren’t anything special. They appeared to be your basic salads with dressing. There wasn’t anything that really set it apart from your simple house salad from any other restaurant. The same could have been said for the minestrone soup. 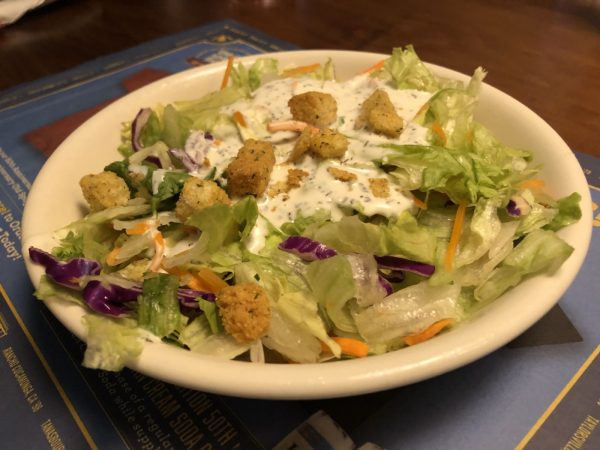 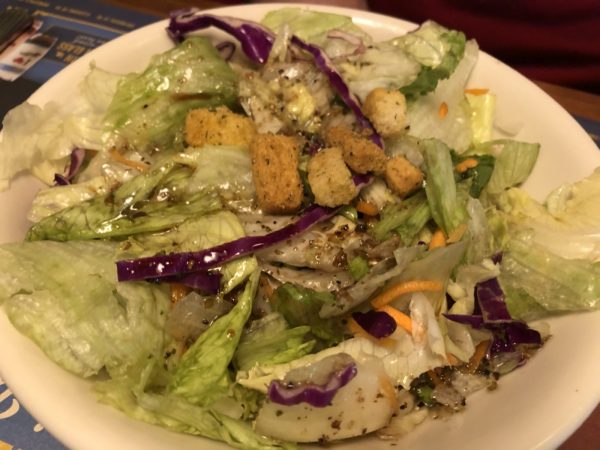 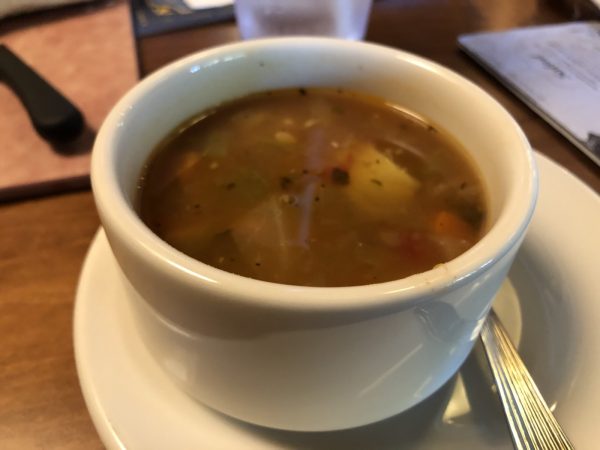 For our main dish, we had the spicy spaghetti vesuvius, garlic shrimp fettuccine, and the pot pourri which was a sampler of their different spaghetti offerings (mizithra cheese & browned butter, meat, clam and marinara sauce).

The spicy spaghetti vesuvius wasn’t anywhere near as spicy as my brother was expecting. I tried a little bit of it and it was very mild; he would have loved a little more heat on it. The flavor was there but the expectation of the rest wasn’t. He still felt it was a good meal. As for the fettucine and spaghetti sampler dishes, we had a similar experience in that it wasn’t anything to write home about. We were definitely satisfied with our meals and weren’t unhappy with it. But if you go into the Old Spaghetti Factory expecting mind-blowing or over the top meals, stop yourself. I hate to say the word “good” but that really was the best way to describe our meals. Aside from the mizithra cheese part of my pot pourri order, everything was just simple but not exactly memorable. 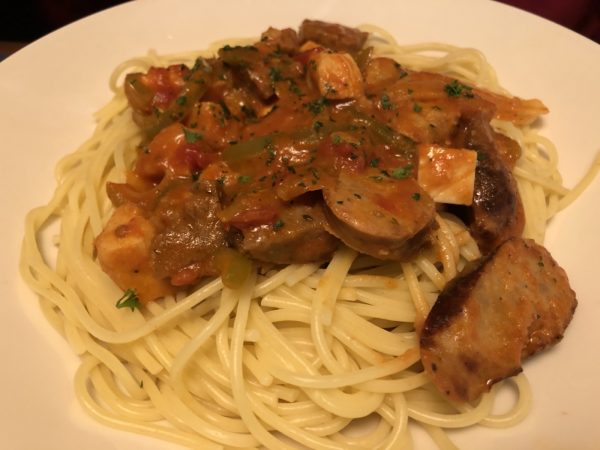 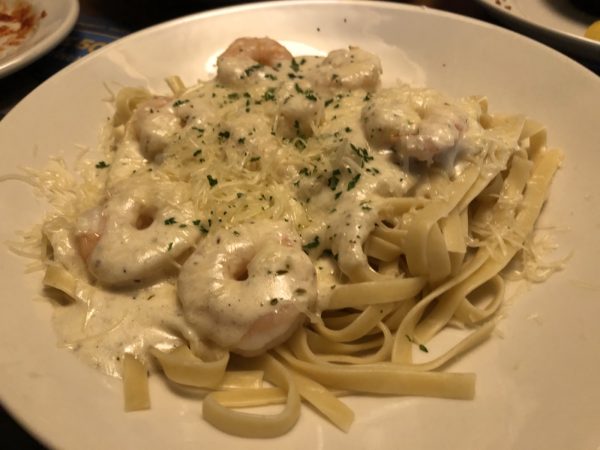 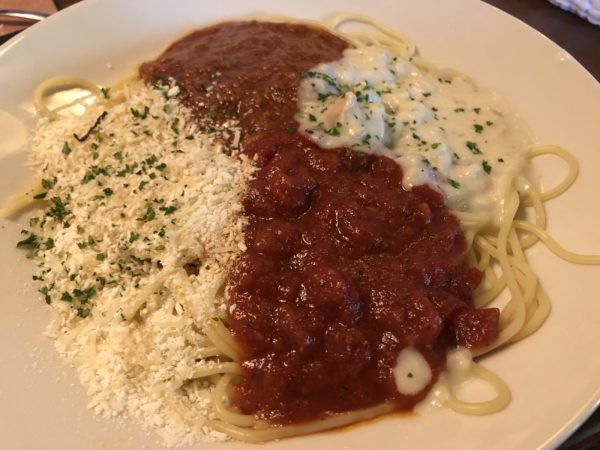 We all had the spumoni dessert which was pistachio cherry chocolate and loved every second of it. What we loved even more than that was the tiramisu. We liked the ratio of sponge to cream and well-balanced coffee and booze flavor. Just a great way to end our meal. 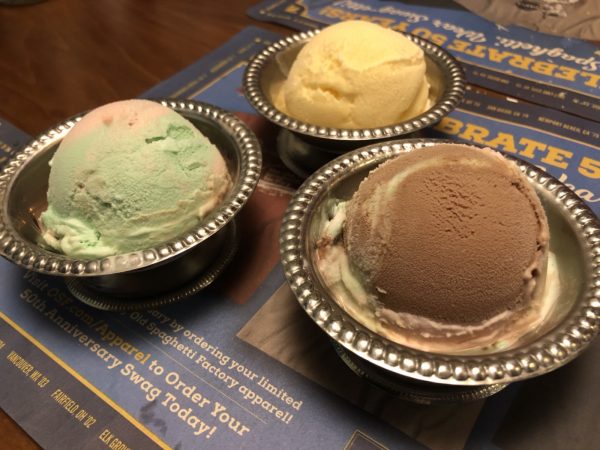 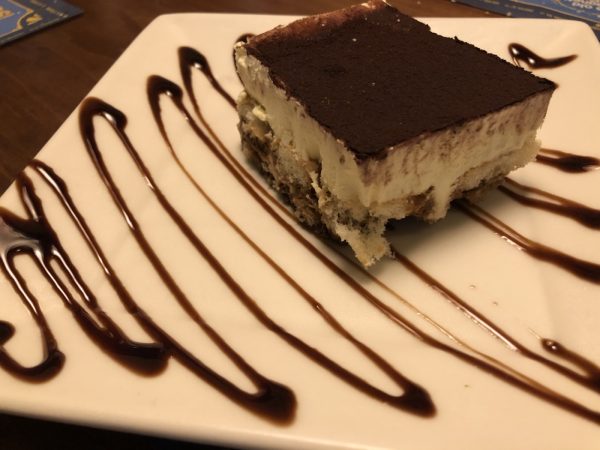 From a service standpoint, The Old Spaghetti Factory was phenomenal from all areas. It was opening week and it looked like they had staff from other locations in for help but they were hitting on all cylinders. The service time for food was super quick, the drinks were constantly refilled and even tabbing out was a breeze. It’ll be interesting to see if the service quality can hold up over time.

For the food, it really didn’t stand out to us as this excellent meal to tell everyone about but that’s not to say it wasn’t good because it was. Of course their food could attract you as they must be doing something right with so many locations all over the country. Everything there was fairly affordable and a great value especially by Waterfront standards. Many meals could be had for $10-13 and come with a salad and dessert which we thought was a good selling point.

As we left, we talked about how we think the future looks really bright for the Old Spaghetti Factory. They had many strong selling points that we think will attract a lot of customers. 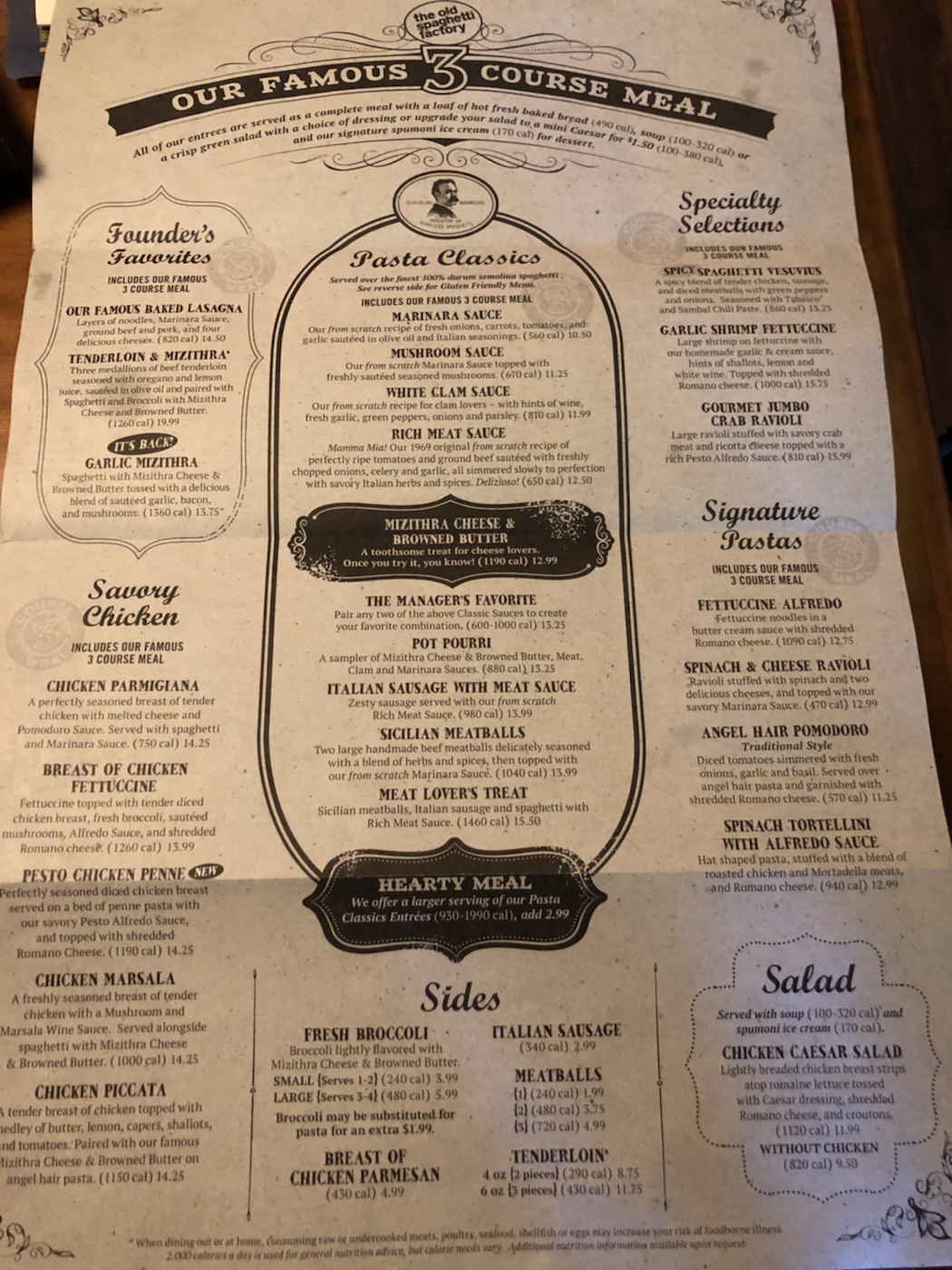 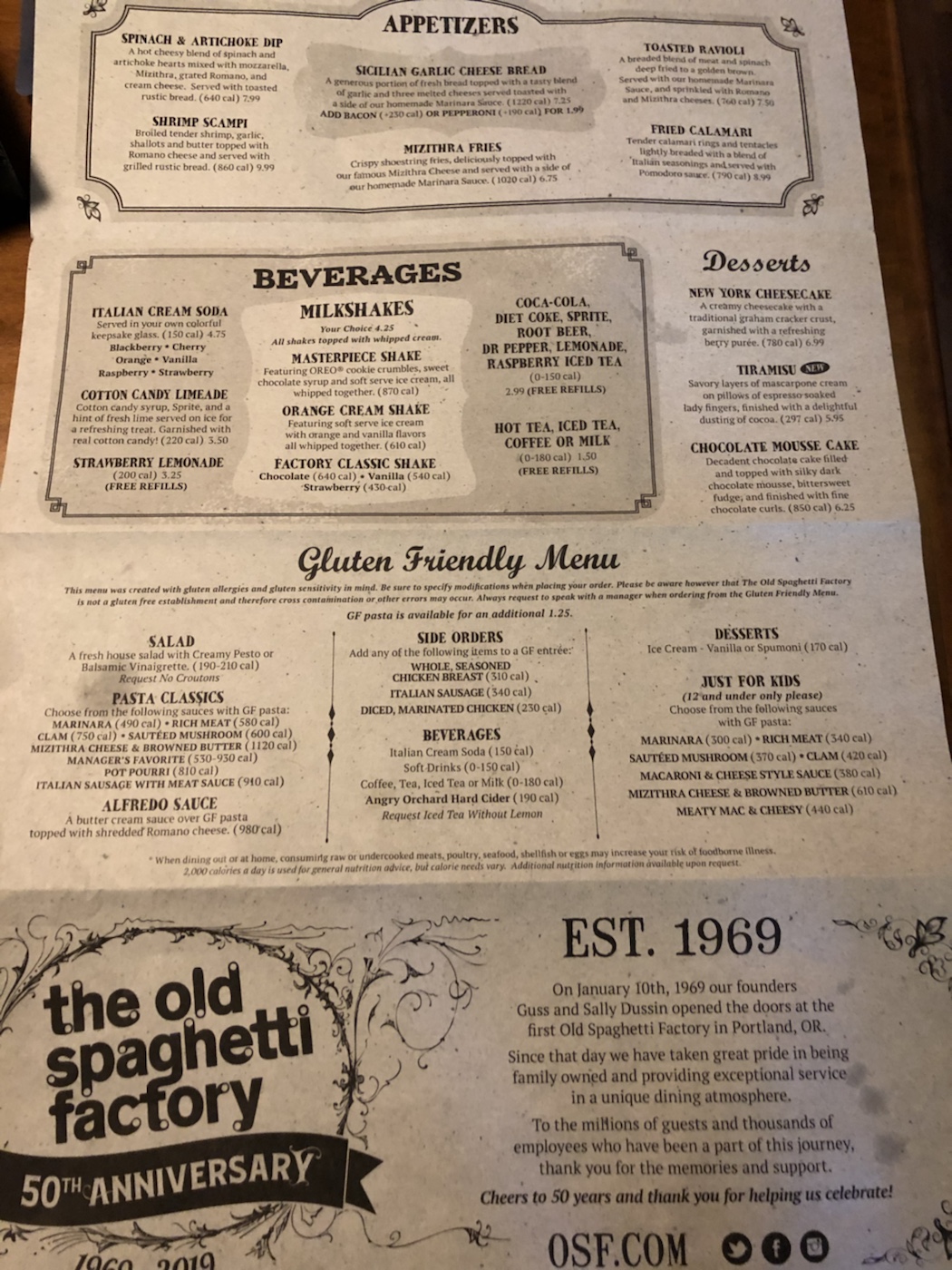