The staff at Wichita By E.B. and I have always been enamored with food challenges. We’ve done things like Mr. Kapow’s infamous wing challenge, Bionic Burger’s Challenge, and Jack’s North Hi-Carryout’s burger challenge. We’ve even done the cinnamon challenge which was a major disaster.

A year ago VietNom Nom came out with their Go Pho Yourself Challenge. 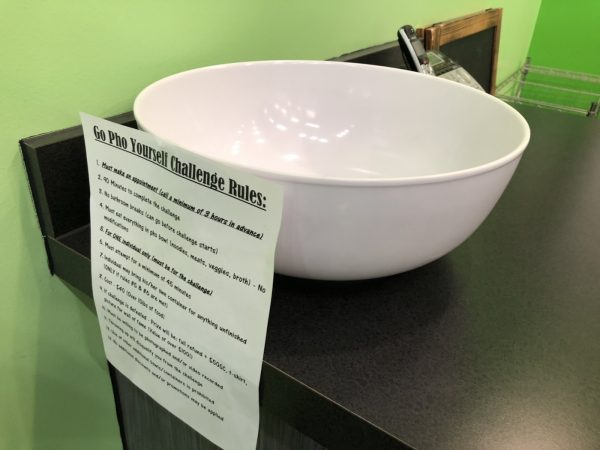 For $40, you have 90 minutes to finish 4lbs of dry noodles, 2lbs of meats (steak, brisket and meatballs), and 4 liters of brother. The total weight ends up being between 10-12 lbs depending on the noodles. 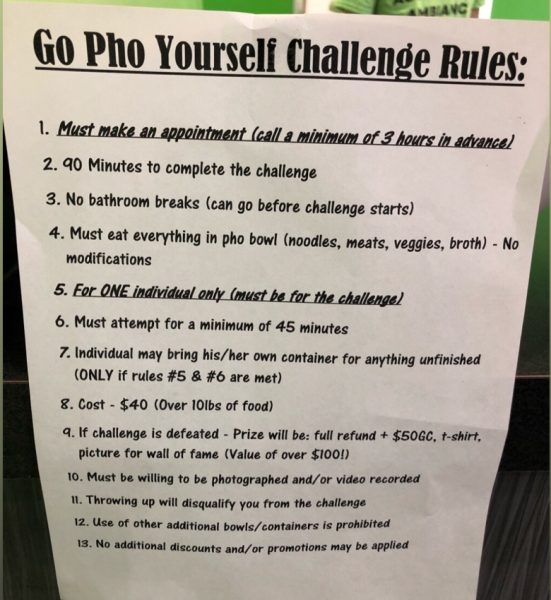 It cost $40 to try. If you finish, you get the pho for free, a $50 VietNom Nom gift card, a t-shirt and a spot on their wall of fame. Losers end up in the wall of shame. 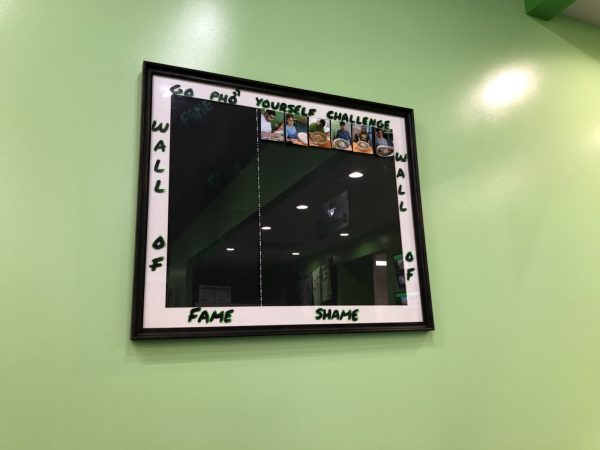 I know my body. It told me there’s no chance I would even come in the top ten. I wouldn’t stand a chance. It would end the same way drinking warm everclear as a college freshman would. So I reached out to one of my staff members, Damon, who has excelled in food challenges in the past. Burgers are usually his thing but when I made him aware of this challenge his words (editor’s note: famous last words) were “easy bro”.

We gave them a heads up the night before our intention of coming up as they need at least an hour in advance.

That evening he texted me that he researched the challenge and started to get concerned. I questioned why he would do this and asked if he also watches La Bamba or Cast Away before flying on a plane.

The next day we drove up together in case he needed a designated driver on the way home. It’s possible to get drunk on pho broth, it was proven that day. 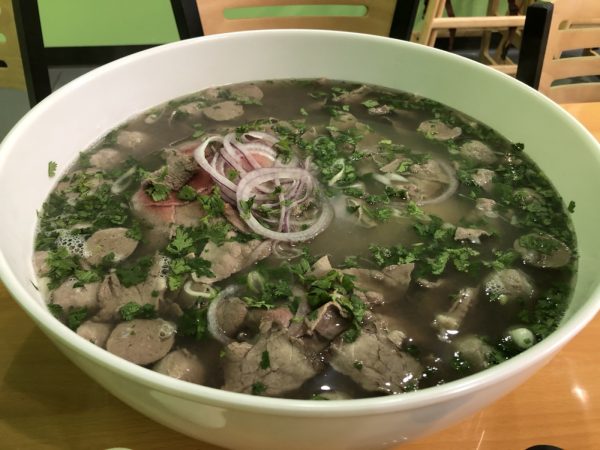 Damon was given 90 minutes to complete the challenge. It should be noted, he was not allowed to use the bathroom during the competition.

He started off the challenge by asking for a styrofoam cup to pour into the broth and drink it. The plan was that may save some time instead of using a spoon. He also opted for a fork for speed and to prevent his hands from camping. 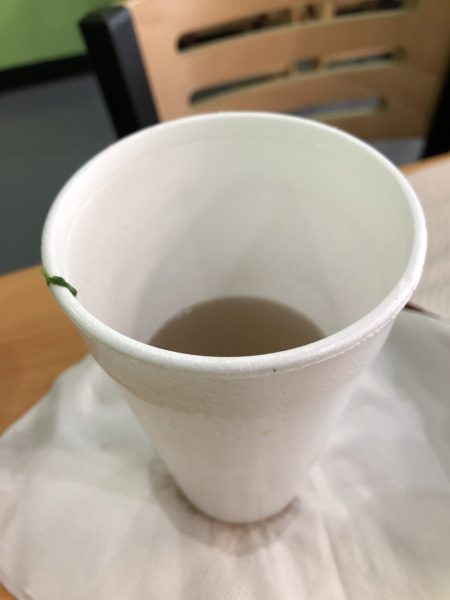 I decided to order a large-size bowl of pho because friends don’t let friends eat pho alone. And I thought it’d be a good picture opportunity for comparison purposes. 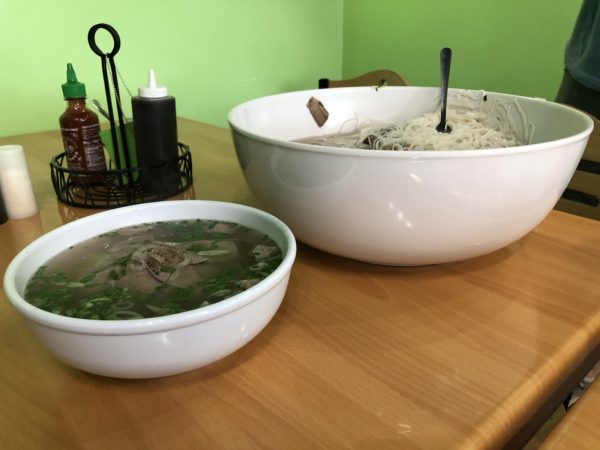 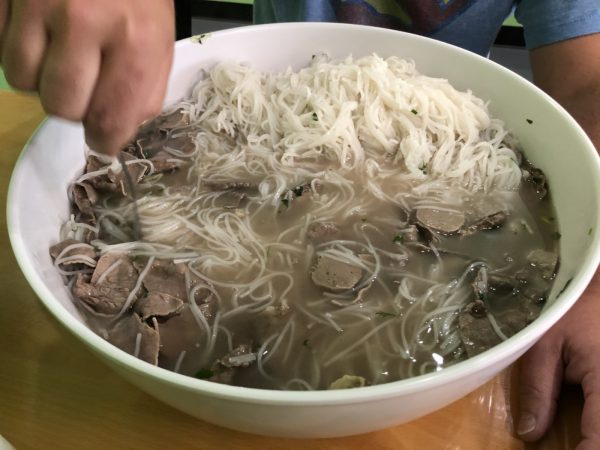 The pho broth was still hot despite putting in ice cubes to cool it down. Damon didn’t want to wait long to begin because his nerves had already set it. He told me he could feel the steam coming up to his face.

We went up around lunch time and he had a regular sized dinner the night before so he was feeling good. He said the pho was pretty good but he was starting to sweat. After a few bites, I could see the nervousness in his eyes. 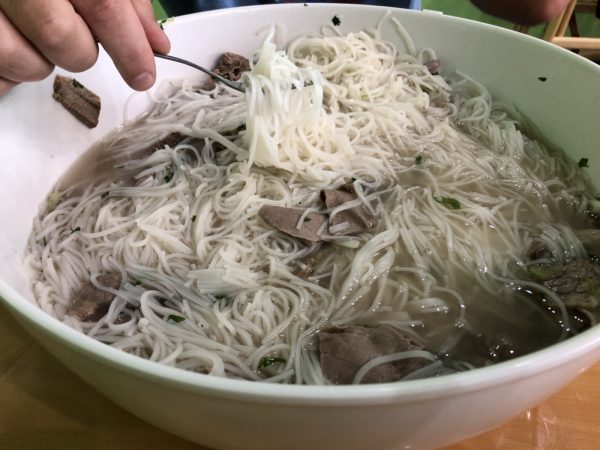 It looked like a dent wasn’t even put in the bowl after twenty minutes. At this time, he had to stand up to eat and take a breath.

“My stomach is fucking killing me. I’m already sick of the noodles.”

His plan of attack was to start with the noodles first and see how much he could get down. Pain started to set in his face, I told him he should switch to the meats.

“I’m full. The noodles have already started expanding in my gut.”

At this time, his stomach started to rumble and burps were coming up. I was sitting across from him and in fear puke would fly into my face. 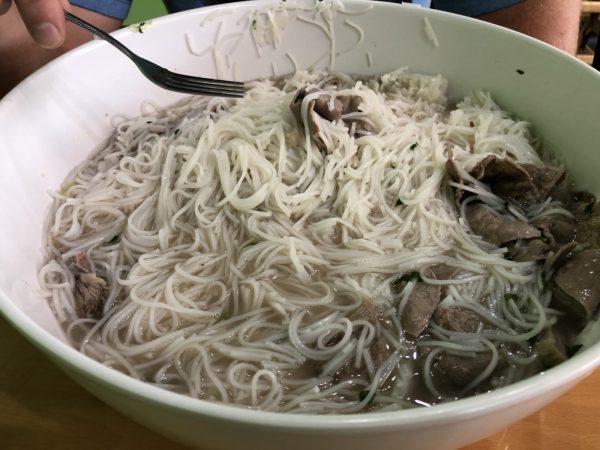 “You know the moments you can’t swallow anymore?”

Damon really started to hit the struggle bus at this moment.

“Here’s the thing, I can’t taste anything anymore. There’s no way.”

I was his cheerleader, life coach, mentor, and motivator. I couldn’t let him quit. I told him to take smaller bites and take his mind off of things.

“There’s no way. I can’t swallow it. My gag reflex is on point. The taste of pho is killing me.”

I tried to motivate him more but then was met with…

“If I have another bite, I want to punch you in the face.”

He sat and took a minor break to gather his composure and know that finishing this bowl wasn’t just for my blog but for all children in the world who don’t think anything is possible. His mindset changed back quickly.

“I’ve never felt like this ever. My stomach feels like there’s fucking pop rocks in there. Everything is terrible right now. Putting food in my mouth is like putting a foot in my mouth.” 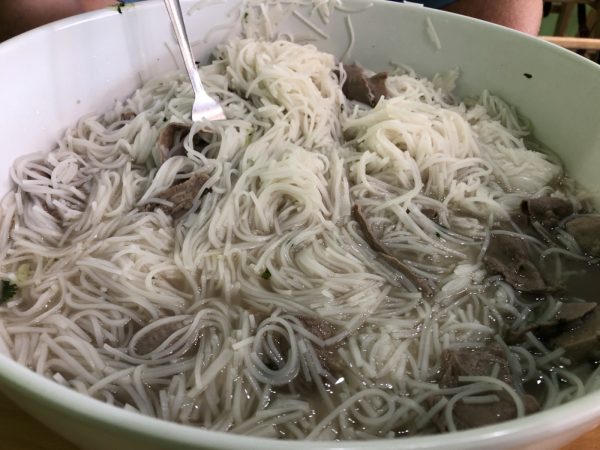 “I feel like I’ve been eating noodles for two days.”

I made sure to remind him it wasn’t two days but just 40 minutes. I tried to get him to focus back on the broth. I reminded him 4 liters of broth was nothing compared to the amount of beer I’ve seen him throw down.

“I can’t even swallow it. It’s like chewing on a mouth piece. I can do burgers, tacos, pizza, speed is my thing. This…. there’s no way.”

He took a another small break.

“I’m trying to get my taste buds back and it just won’t.”

We switched conversations over to the Fox Hole Lounge’s 3 pound burger challenge.

“I could do that challenge……… today.”

Then reality set in on what he was currently doing. 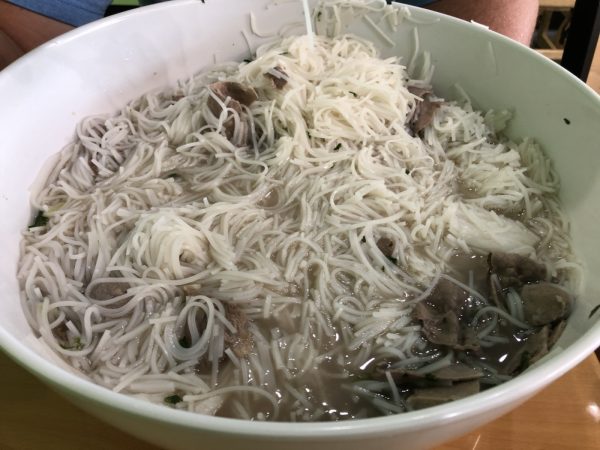 I was getting very disappointed in the progress he was making over the last 50 minutes.

“Why can’t you just praise me for my achievement.”

He had to know failure wasn’t allowed for people who represented the blog unless it was me. Only I can fail as I’m a model for it.

“I can’t swallow it. I can’t chew it. I like pho but you have to REALLY love pho to finish this.”

I just shook my head and listened to him complain and moan more.

“I have a headache.”

He then looked at his leg and started to freak out.

“I have speckles on my leg!!! Where’s that coming from.”

I just sat there and shook my head wondering if this is what most women feel like listening to their men complain and over-dramatize things all hour long.

It took him two minutes to chew a piece of meat. I could see him tapping out soon. 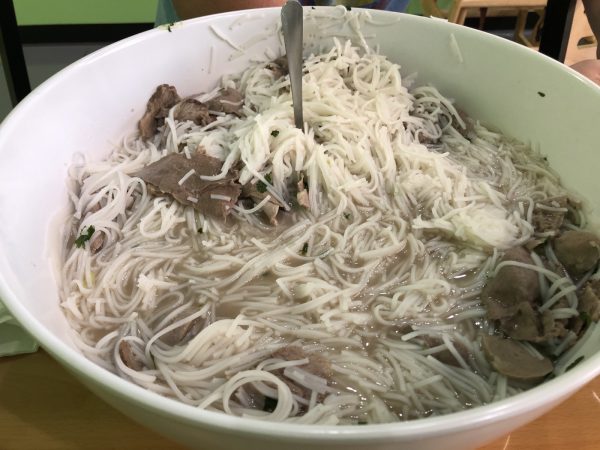 At this time, people in the restaurant started to come over and see what Damon was doing. All of the sudden the complaining stopped and he was all smiles. People were giving him words of encouragement or reminders of how stupid he was for doing this challenge. Kids walked by with wide eyes like they were watching some alien devour a big bowl of food.

“This might be worse than a hangover. Everything smells bad. I might never eat pho again, thanks Eddy.” 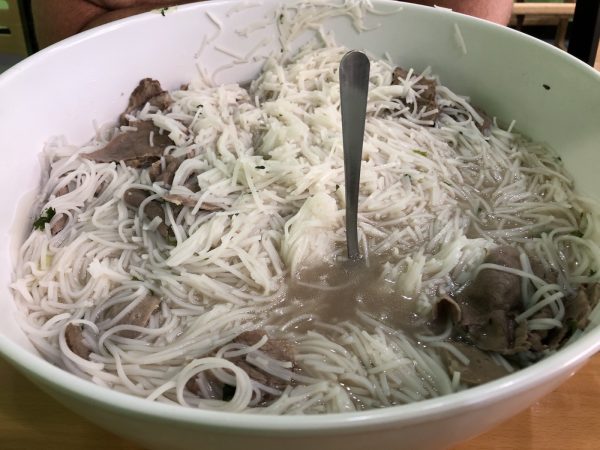 “Dude, I’m getting sick, we have to get the f out of here. I still can’t even chew it anymore.”

I stopped my cheerleading and looked at him with great disdain.

“This is by far the toughest challenge ever. I want to go to sleep. I’m exhausted.”

I told him to take one more bite and we could call it.

“That last piece was like putting twenty rubber bands in your mouth and chewing it.”

I figured it was time to call it. I knew it was over for him. This was the look of defeat. 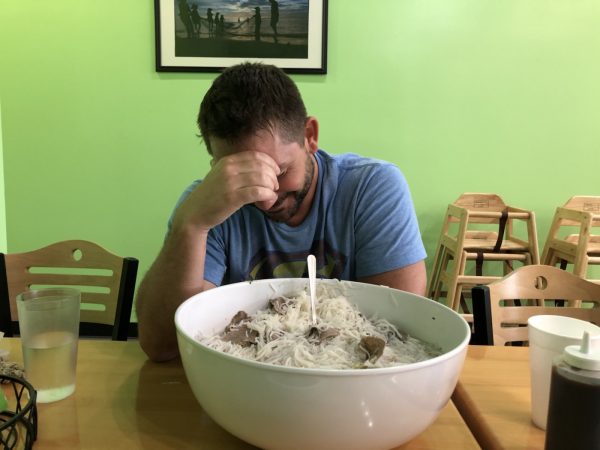 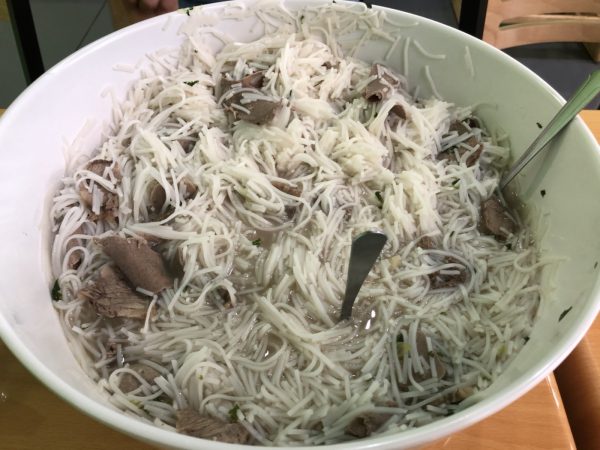 After seventy-three minutes, he may have finished a quarter of it. He wasn’t in good shape.

We were told someone finished around 2/3rds of it which Damon proclaimed, “That dude is a MAN!!!”

Damon tapped out and they stopped the timer at the 73 minute mark. He told the owner that he wasn’t expecting the noodles to expand that much but it kept going. To this day not a soul has completed this challenge.

We left and on the way home he told me two memorable things:

Honestly I was full after the third bite.

I think I’m going to throw up (followed by multiple large burps that other cars probably heard).

Come to find out when he got home, he would do just that.

You can check out the entire video of the bowl being made and more below: