After a very unsuccessful visit to VietNom Nom for the Go Pho Yourself Challenge, I was unhappy that the staff at Wichita By E.B. has remained winless in food challenges.

For this next challenge, I decided to go a different route. I wanted not just one but two competitors to double my odds. Since I’m the reigning three time Super Bowl champion in my fantasy football league, it was only fair that two leaguemates I trounced on during the season took part in my next adventure.

At the newly opened Foxhole Lounge in the old Annex, they created a new challenge called the M.O.A.B. (Mother of All Burgers) challenge. For $25, you get 1 pound of angus beef, ham, 4 slices of bacon, grilled mushrooms and onions. It doesn’t end there. Included is 3 chicken tenders, 2 grilled brioche buns, bacon jam, pepper jack, habanero, cheddar and provolone cheese, topped with onion rings and stacked nearly a foot and a half tall. Oh…. and there’s about a pound of fries. So roughly a 3 pound burger and a pound of fries…. a plate of food that weighs almost as much as I do.

If you complete the challenge in under 30 minutes, you get the burger for free and your picture on the wall of fame. It’s been completed three times out of I believe five tries. The record currently is 11 minutes. 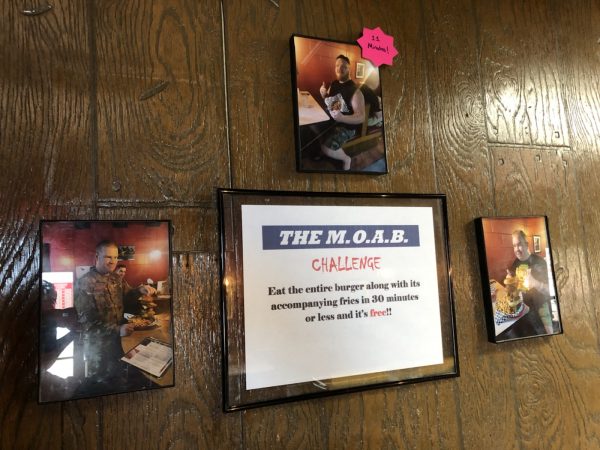 I was able to stand back in the kitchen and watch the burger being made. I swear, every animal that you could eat on Noah’s Ark was probably stuffed into this Mother of All Burgers.

Two of my buddies, Darin and Chad, were my suckers for the challenge. Chad had been reading about eating competitions and how to train properly. He did his research and was ready. Meanwhile there was Darin, who I don’t believe he knew what he was getting into.

My sales pitch to him was, “Hey you want to do this burger challenge? It’s really easy.”

It worked. He showed up and already knew when he arrived, it wasn’t going to happen. The staff had an app going with the time and we were off to the races. 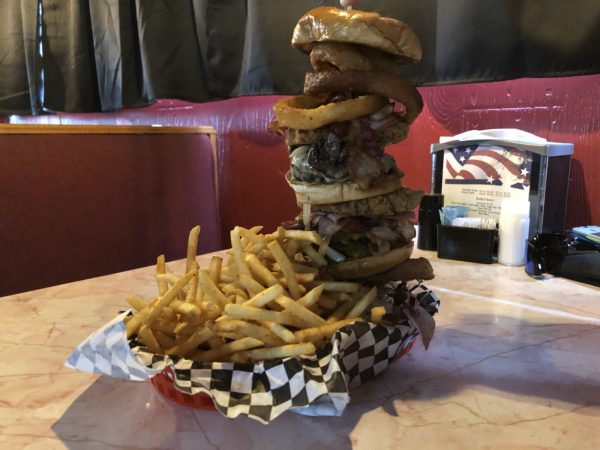 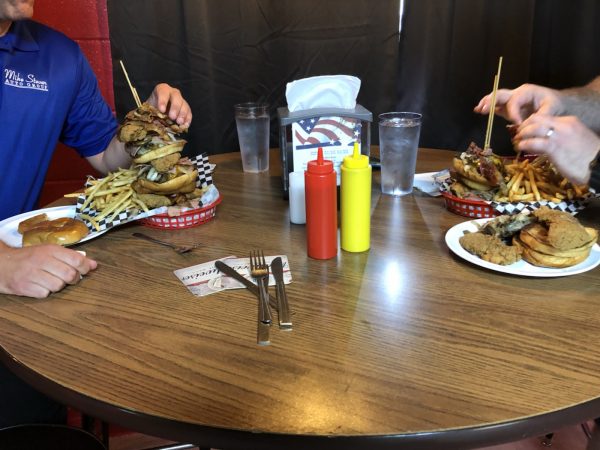 In the first five minutes, Chad had a gameplan of picking it apart. He took off the buns and focused on the meats and fixings. He had most of the burger patties, bacon and mushrooms completed by five minutes.

As for Darin, he spent much of this time coming to a slow realization of what he was getting into. 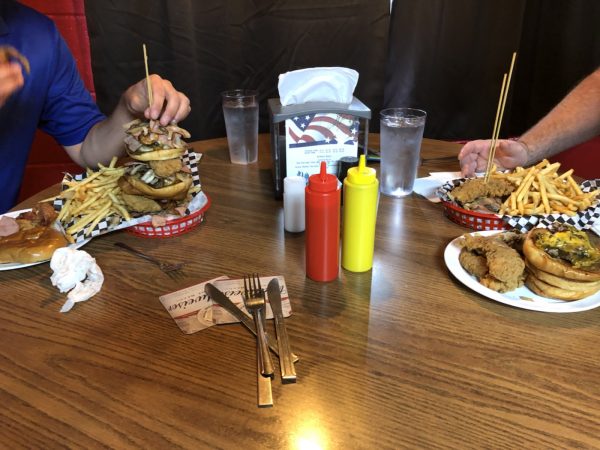 Chad was all business and focusing on the end goal. As a father of two, he wanted to leave a legacy behind at The Foxhole Lounge.

As for Darin, he had one burger patty down and was ready to leave a legacy behind at the Foxhole Lounge’s toilet. 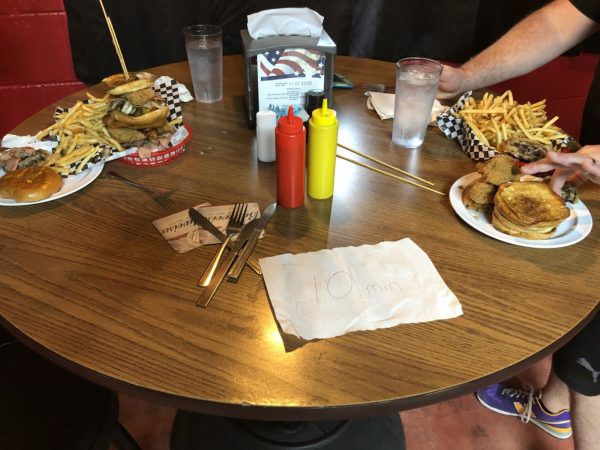 Chad was making great timing after ten minutes. With just twenty minutes left, he could see the finish line.

Then there was Darin who wanted to remind everybody it was a marathon, not a sprint.

Well Darin….it’s a 30 minutes marathon. At this time, he got on his phone to make a call. We couldn’t tell who it was but I believe it was his mother to bring him some Pepto. 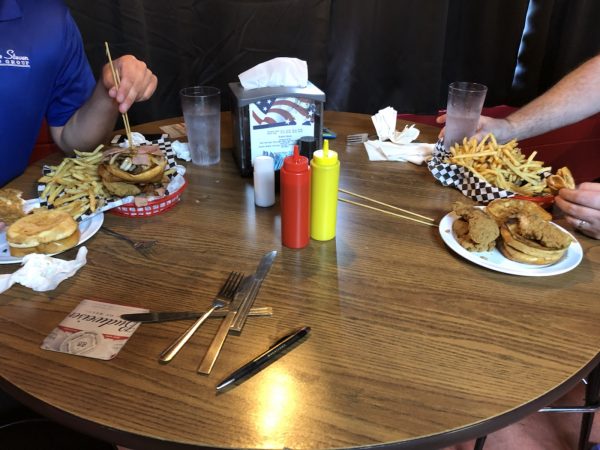 At the twenty minute mark, it was a tale of two different stories.

Darin actually had picked up the pace and put in a good dent in his fries along with two of the three patties.

Chad, on the other hand, started to hit a wall. By that point, he had everything down except for the buns, chicken strips and fries. The carbs were killer. 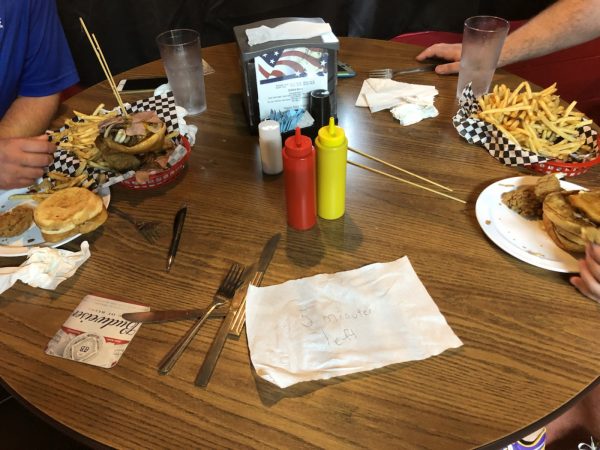 With five minutes left, it became apparent that neither Chad or Darin were going to complete it. But Chad is an LSU and Saints fan, he’s from Louisiana and doesn’t believe in quit. We pushed him to start dipping his buns in the water which he tried. This would only bring up burps and slight spit-up that made Darin and I start to gag a little.

I lost my appetite. 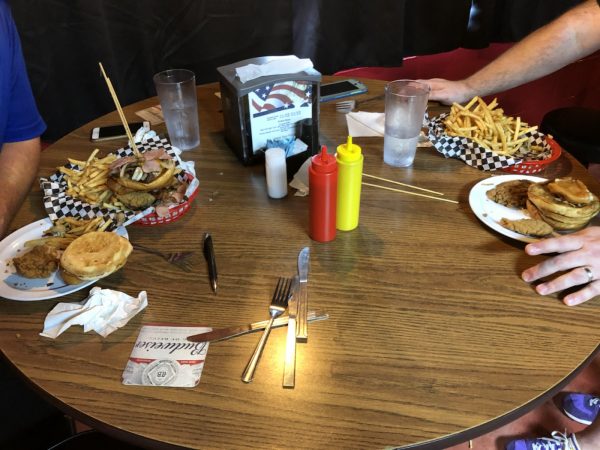 At the two minute warning, Darin asked for a to go box. Chad was all silence.

It was crystal clear, Wichita By E.B.’s adventures at food challenges would remain winless. I need to get better suited staff to do these for me. 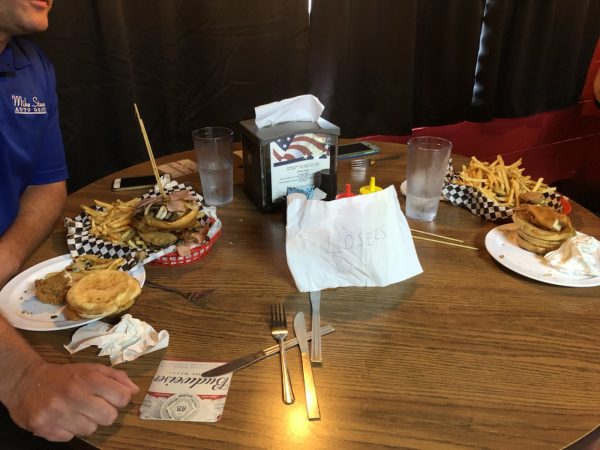 My friends had let me down. I wasn’t one to celebrate them and say good job. I’m not an everybody gets a participation medal type of guy. I sat there and reminded them punishment for this loss would mean me winning our fantasy league Super Bowl for an unprecedented fourth time.

In the aftermath of all of this, Chad wants a salad for dinner and Darin has plenty of leftovers. And I’m in search of my next food challenge and guinea pig.

You can check out the entire video of the burger being made and more below: 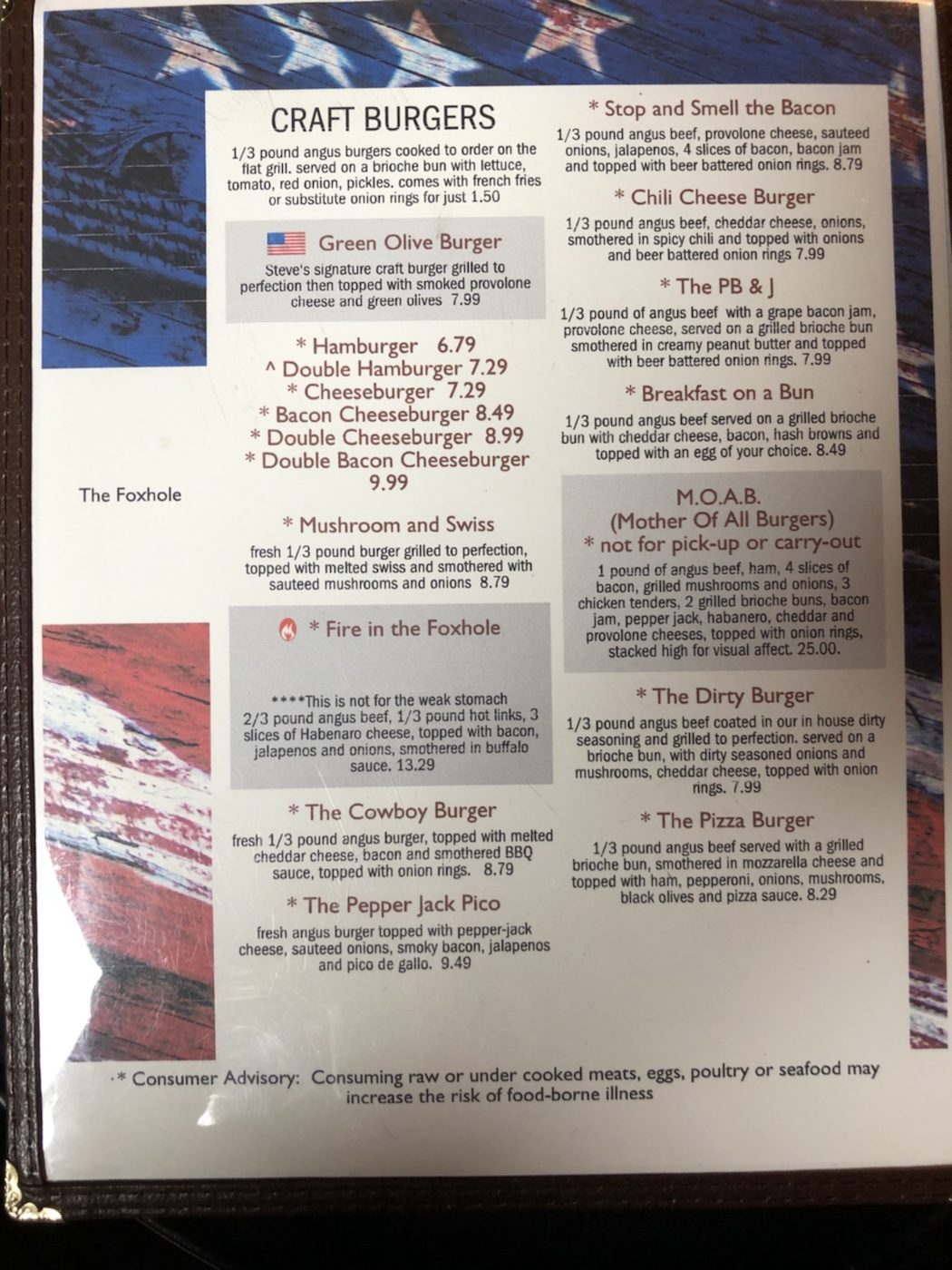 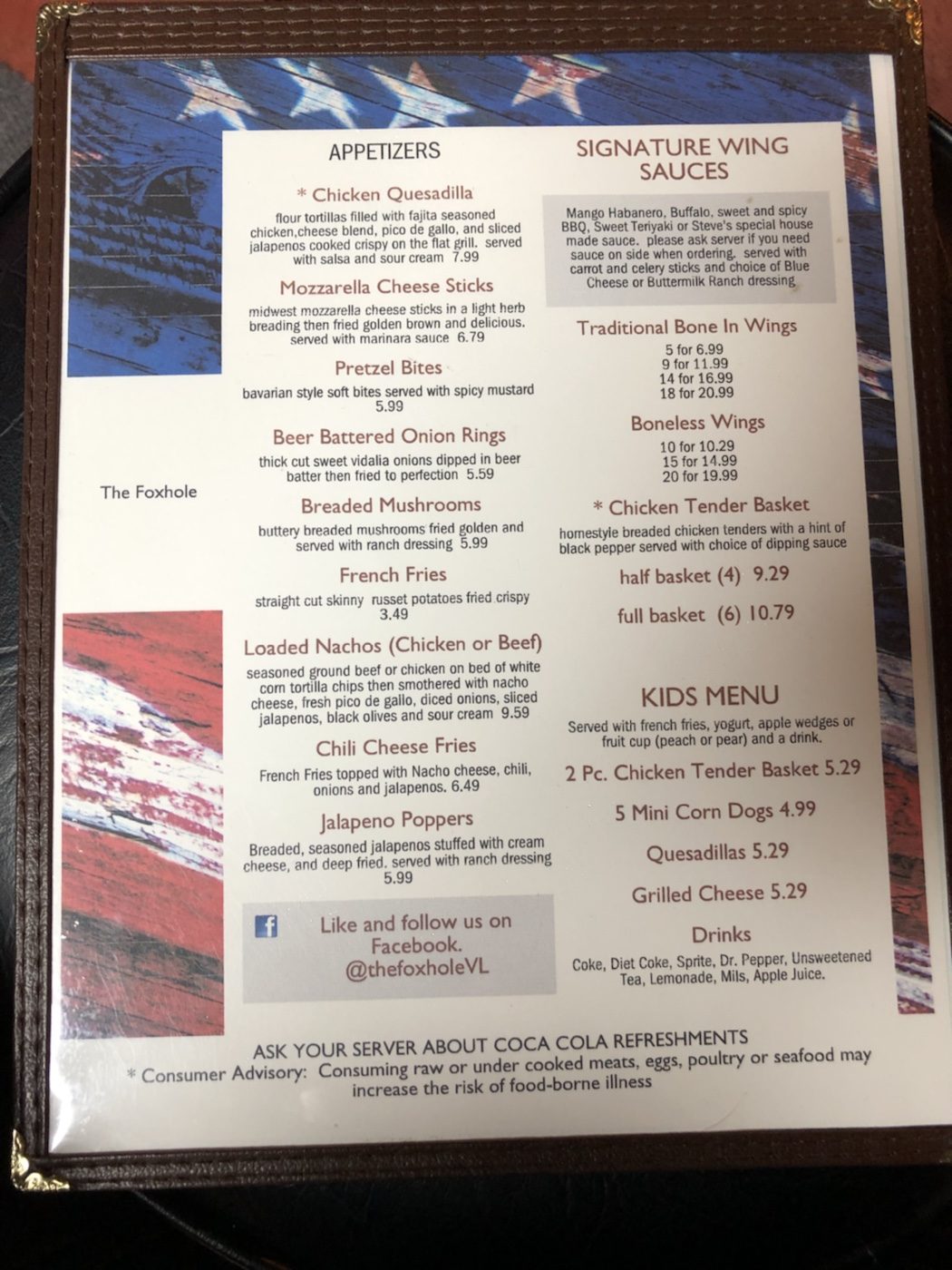 1 thought on “Attempting the nearly one and a half foot tall M.O.A.B. Burger challenge at the Foxhole Lounge”