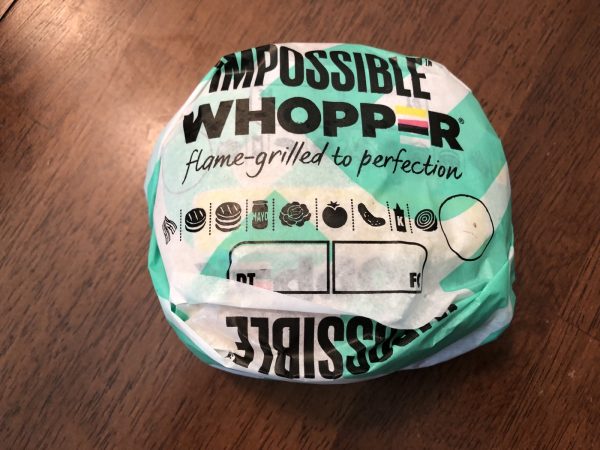 It’s been advertised as being vegan and vegetarian but people should known it’s cooked in the same broiler as the chain’s beef and chicken. Burger King did come out and say that guest can ask for the patties to be prepared in the oven but the product still cannot be labeled vegan as Burger King restaurants “have an open kitchen environment.”

If you’re also keeping track, Burger King isn’t the only burger restaurant with a plant-based burger. The A&W restaurants have the Beyond Meat patties. Impossible Foods is different in the fact that it imitates meat more so than the Beyond Meat.

Anyway aside from all that, the Impossible Whopper officially hits restaurants on August 8 but Burger King’s locally had it available the day before. I decided to swing by and order a regular Whopper and an Impossible one. My goal was to do a blind taste test for my girlfriend and I. This would be the first time she was back doing one since the grasshopper taco incident so I used this to get back in her good graces.

The Impossible Burger cost $5.79, a dollar more than the regular Whopper which was $4.79. But I noticed on the Burger King app, they had a BOGO coupon. The staff at Burger King allowed me to use it for this purchase so I was able to get both Whoppers for the $4.79 price. 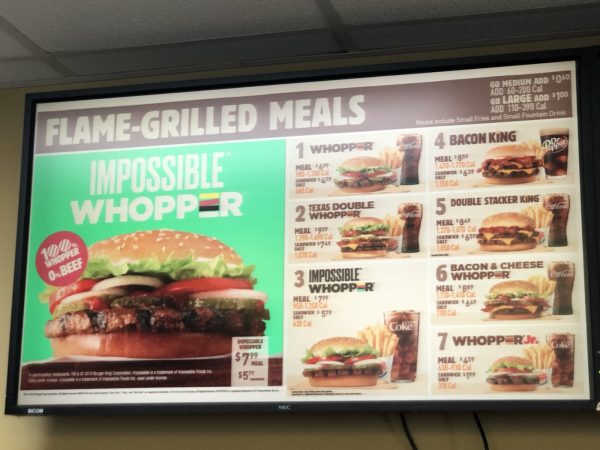 I requested the Whoppers be made with the exact same regular toppings. 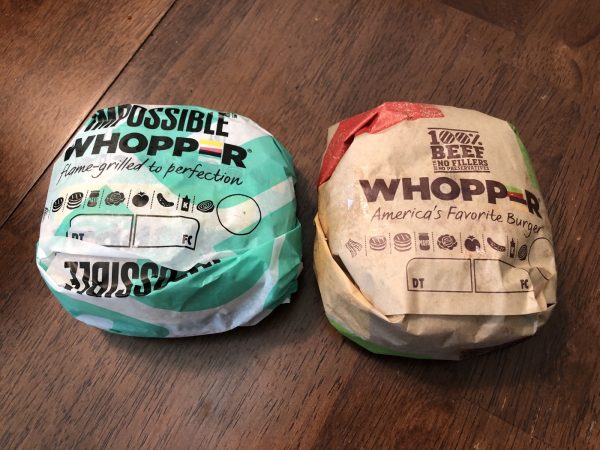 Can you tell which one is which? 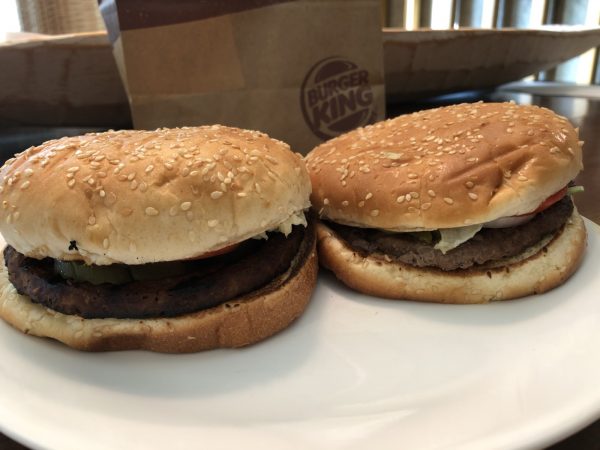 For the blind taste test, my girlfriend went first and blindly tasted the burgers with everything on it. She then tried just the meat patty. Both times she was able to pick which was which noting the Impossible Whopper was thicker and had a drier texture to it. From a taste perspective, it wasn’t all that bad. We did notice the patty in general had a crispy edge to it.

When it was my turn, I asked for two pieces of the patty towards the center of it. Surprisingly enough, I actually guessed wrong when just trying the patty itself. When I was given the whole Whopper, it was easier to determine which was which though. The Impossible Whopper had a denser feel to it especially when you held the burger together; certainly thicker. It wasn’t as firm or “squishy” for the lack of a better word than the regular one.

From a taste standpoint, there really wasn’t much of a difference. I think you could give someone an Impossible Whopper, they may notice the density and a slight difference in texture but may not realize they are eating an Impossible Whopper. Especially once you add in all the toppings on a Whopper, it really begins to mask the noticeable differences.