The newest state park, Little Jerusalem Badlands State Park, officially opened a couple of weeks ago. Megan knew she wanted to go the moment it was announced. It’s no secret I’m not an outdoors type of guy but I’m all for experiences and figured why not.

The park is located between Scott City and Oakley at the Smokey Valley Ranch and is the largest Niobrara Chalk formation in Kansas. It’s located off I-70 and U.S. Highway 83.

There are two permanent trails at the park you can hike at your own pace. Outside of a $5 parking fee, otherwise it’s free for everyone.

Seeing as though the weather was going to be nice for the weekend, we made a day trip of it with the baby. We took the route that drove us through Great Bend and then Scott City, also known as the home of Ron Baker.

We were making great timing. It’s essentially a 4 hour drive. If you go just be aware the signage is very minimal and almost not even noticeable. Once you reach the sign at Gold street, you’re four miles away. At that turn we were getting excited and then boom, we heard a noise and the tire light go off. Just our luck with a few miles to go, we had a flat tire.

As we are standing on the side of the road trying to figure out what to do, a truck stops and asks us if everything is OK. I told him we had a flat tire and asked where the closest place to get a new tire would be. He pulled over to help us out, make some suggestions and help us change our tire as I called around to auto shops.

We were approaching 5pm in the middle of Western Kansas and literally everything was closed. On top of that, flies were buzzing all around me and hanging on my shirt – Seriously did the flies have to kick a man while he’s down? By sheer luck, we found an autoshop 45 miles away that was closing in two minutes. They just happened to have one tire left of what we needed. He had a tow truck and was willing to come out to get us since the spare we had was of course low on pressure. The spare would not have made the 45 mile drive but was good enough to get us to the park. So even though he was minutes away from closing, he saved us.

We had just under 30 minutes to enjoy Little Jerusalem before he arrived. The pictures don’t do the a 250-acre Niobrara Chalk limestone formation justice. 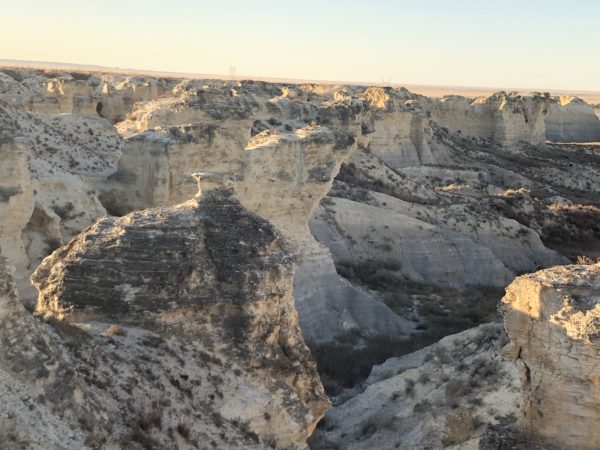 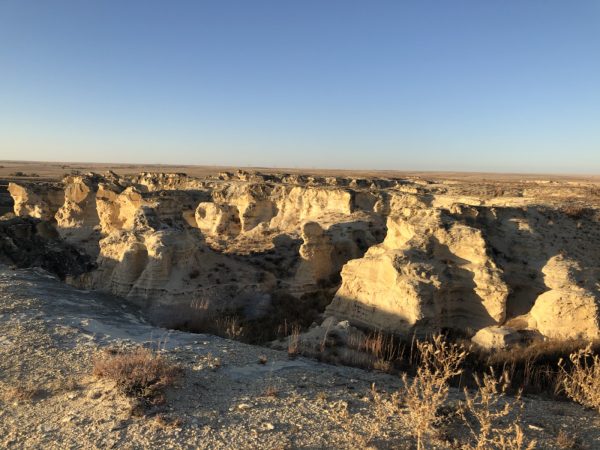 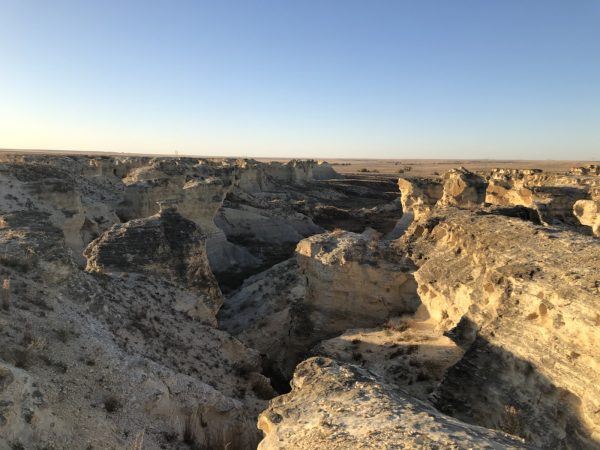 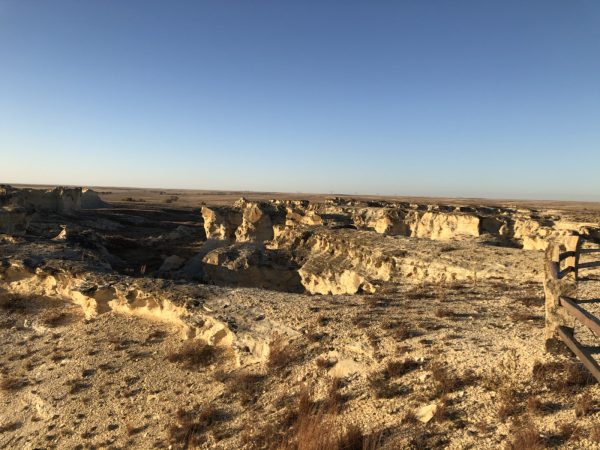 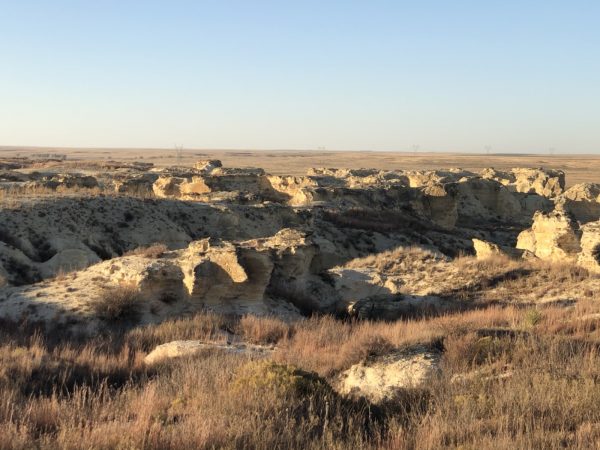 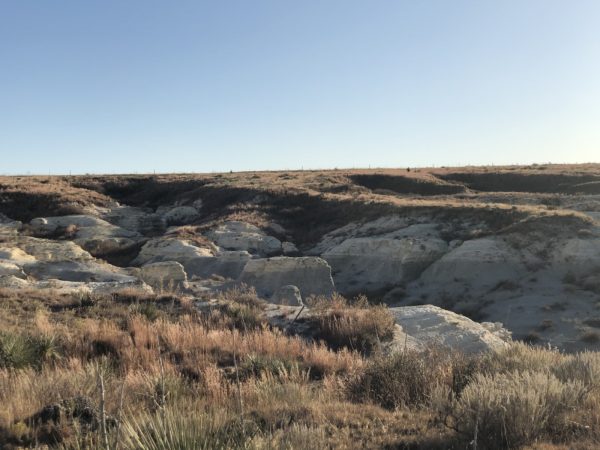 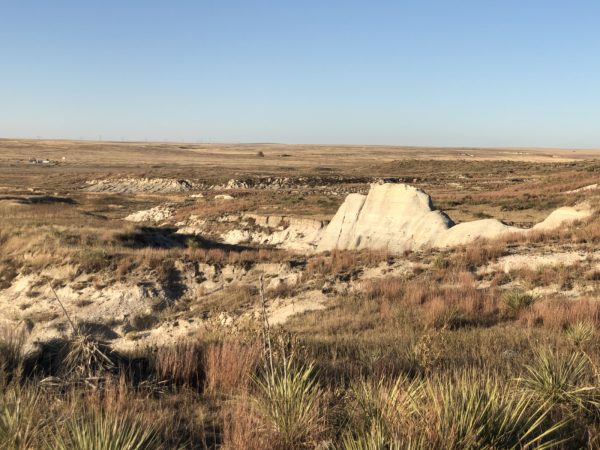 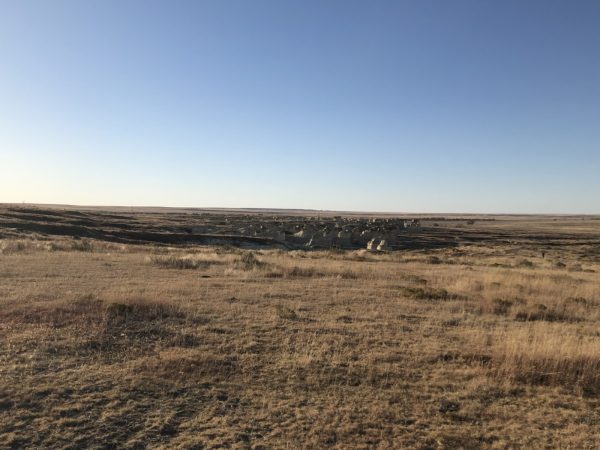 Just as we were starting to get into the groove of walking the trails, our tow truck guy called and we hustled our butts back to the car. Fortunately the tow truck was an extended cab. It would be the first time my daughter would be able to experience riding in her car seat in a tow truck. Nothing like family time in a tow truck driving to Grainsfield, KS population 276! 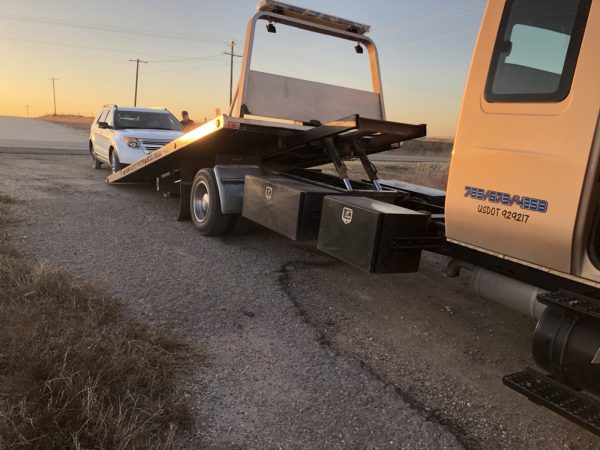 Just as things were looking up, the 45 mile drive to Grainsfield was a cold one. I was riding in the front seat and the truck had its AC on full blast. I had a long sleeve on and was freezing my butt off. I looked at the driver and he was just sitting there with a short sleeve shirt on like it was 90 degrees out. It made me feel so manly…… 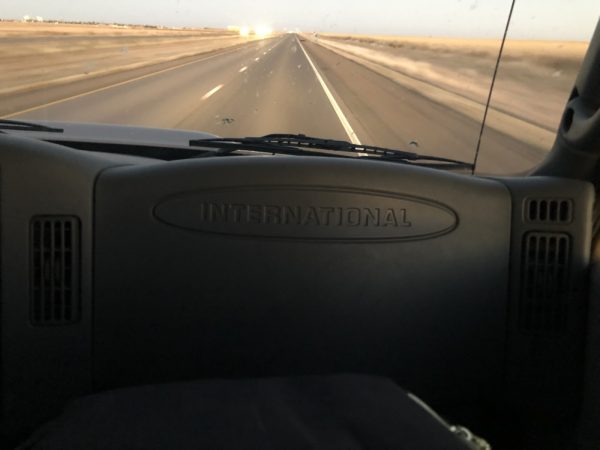 But overall that man was a hero and a lifesaver. He came and picked us up, worked well past his 5pm closing hours, found a huge slash in our busted tire, replaced it and was able to get us on our way home. Super nice gentleman, his grand kids even stopped by to visit him.

So it took us 8+ hours of driving to see the Little Jerusalem Badlands State Park for under 30 minutes. Not the most ideal situation. It could have been worse though and we may have been stuck somewhere with no access to a autoshop for a day or two. Huge thanks to the random good Samaritan who stopped on the side of the road and our auto repair guy, Jack. And so much love to our daughter who was such a trooper. I felt so bad that she had to be in her car seat for so long but she did her best and I’m beyond proud of her.