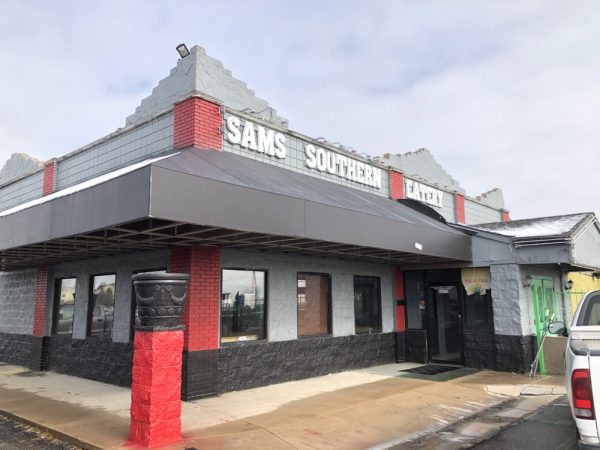 Wichita’s newest restaurant has finally arrived! Sam’s Southern Eatery, a Louisiana-based chain, had their much anticipated grand opening and I made it a point to stop by. The restaurant serves catfish, burgers, Po’ Boy sandwiches, gizzards, shrimp, catfish, oysters, salads, chicken strips, gumbo, and their popular shrimp known for its huge size.

I should preface this first look by saying it was their very first day so everybody should take that into consideration while reading about my first experience. There was definitely some slowness while I waited to put my order in. During this time, I just sat and observed everything. There was a lot of coaching taking place. Many of the servers appeared to be first-time servers.

I wanted to try a bit of everything on the menu but none of the items were à la carte. I was told you had to order entire meals. With that, I went with their 3 fish, 3 shrimp and 3 oysters meal. For most of the meals, you get the option of having your seafood fried or grilled. I decided to have my fish and shrimp grilled. My sides were red, beans and rice and four hush puppies. The food came out fairly quickly. 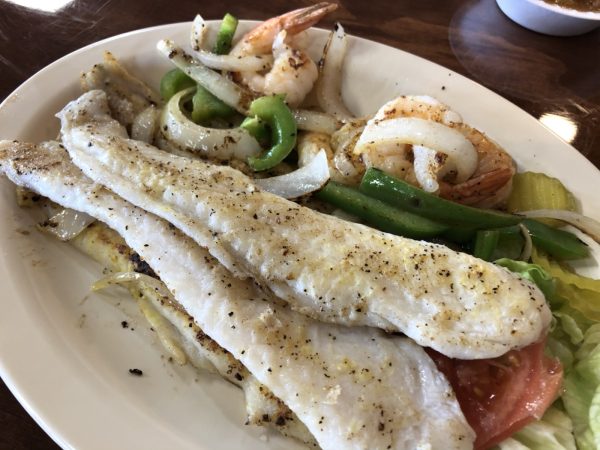 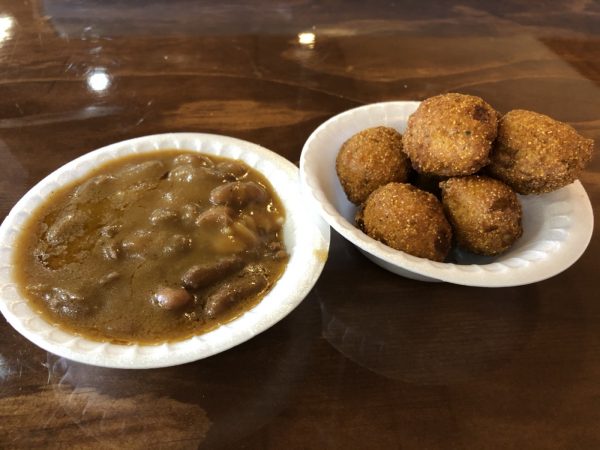 I told them of the mistake and within probably one minute, I had six oysters placed in front of me. 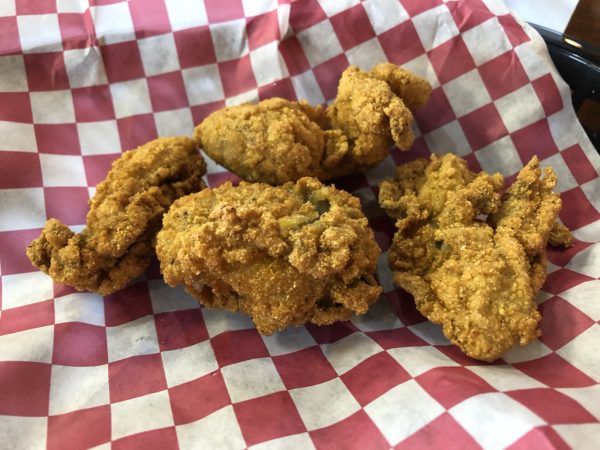 Getting into the food, my first few bites into the fish and shrimp were very underwhelming. It didn’t taste like anything was seasoned and most of it was more on the bland side. I kind of felt the same way about the red, beans and rice. There was a layer of film over the top of it that looked like it had been sitting there for a while. On the bright side, the shrimp were indeed big and I really enjoyed the fried oysters. The breading didn’t have much to it but the oysters had good flavor to it and wasn’t really fishy at all. The hush puppies were about average to me but I’m not a big connoisseur of them so don’t take my word for it. On top of that, I didn’t get offered a single drink refill the entire time.

The price point wasn’t too bad at all. My meal was $14.99 which was more than fair for all the seafood I had. If I had to change things, I would have ordered all my fish fried.

My biggest takeaway from Sam’s Southern Eatery was they need some time to get the kinks out. There were struggles during their opening but that’s the case with most restaurant openings. Other customers had long wait-times and incorrect orders. One lady seemed to be running the show and training the entire staff herself. She seemed very nice but I had a different server who appeared as if it was her first time ever serving. I overheard another table making a similar content. Even though they were all struggling, , they all were nice and well-intentioned. They wanted to do a good job but probably needed a little more time to learn. At no point did they look annoyed with customers bringing something to their attention which I really appreciated.

I’ll be the first to admit, I had high hopes for this place. I love all things seafood and the menu looks promising. Yes, I wasn’t exactly a fan of most of what I ordered but maybe that’s the kitchen still learning things as well. If I were to do it all over again, I’d probably give this place a month or so to get many of the kinks worked out.

This place will definitely be getting another visit here soon. 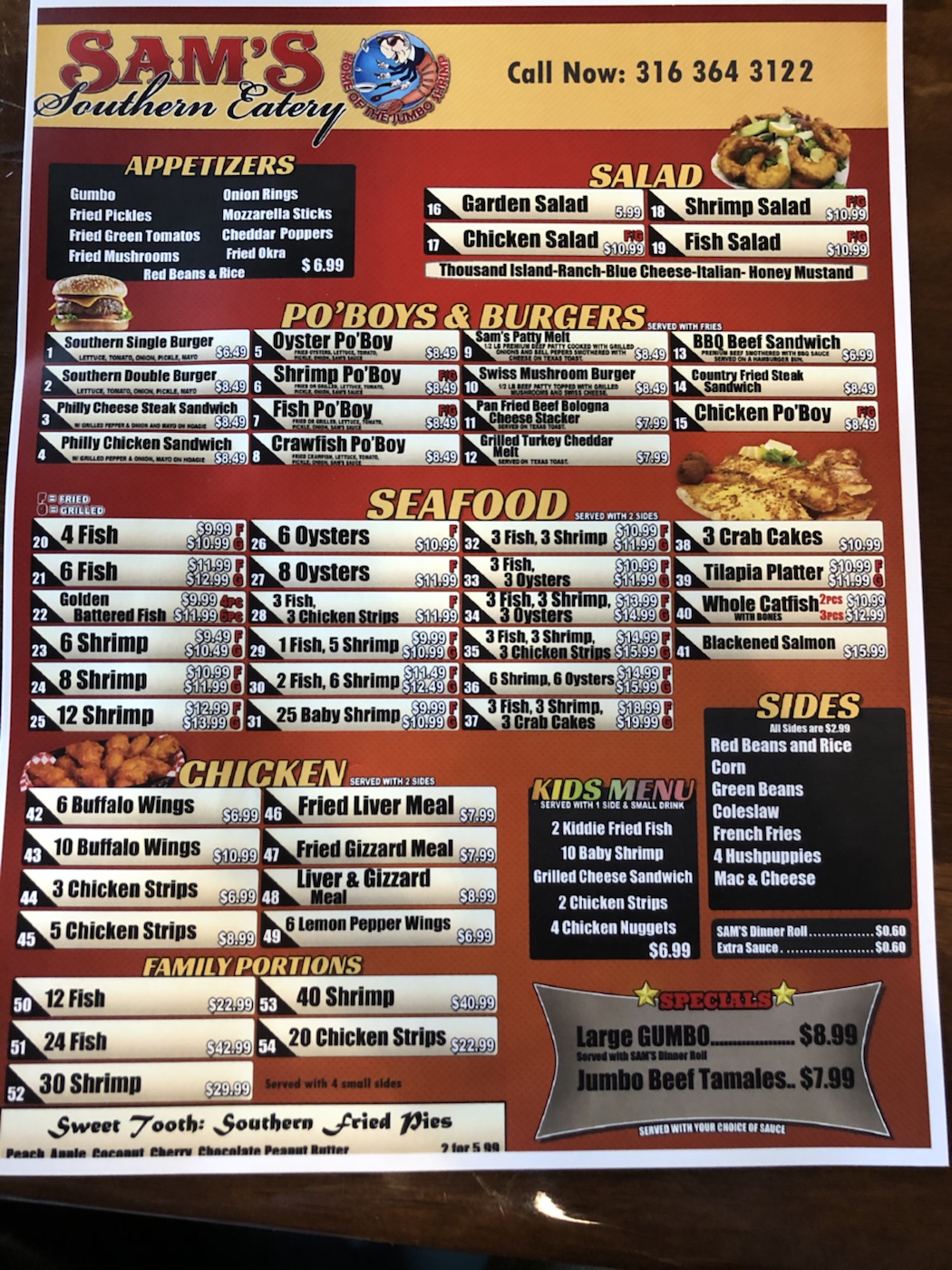