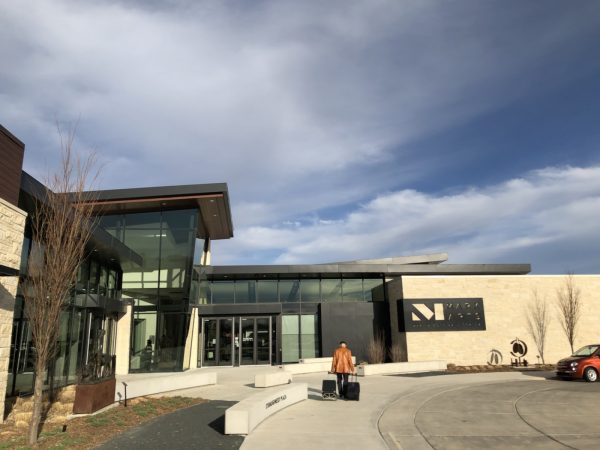 Something I’ve long wanted to do is a date night at Mark Arts. Since they opened, Mark Arts has been hosting cooking classes in their culinary art workshop. Most classes seat around 10-14 people and the hands-on classes range from cookie decorating to sushi to appetizers to Italian to Korean to tapas to BBQ to cakes, you name it.

Each class is taught by a multitude of different chefs and instructors who have differing backgrounds but share the same love of being in the kitchen.

Megan and I decided to sign up for their ‘Let’s Cook Lobsters’ class. In the class, each person would be able to choose a lobster, cook the lobster and eat the lobster, just like they do in Maine. People could bring their own wine and the lobsters were provided by The Seafood Shop. I’ve never seen a lobster cooking class in Wichita and thought this would be a fun, unique date night.

Our class was instructed by Chef H, also known as Harry Pape, author of Simple Cooking with Chef H. 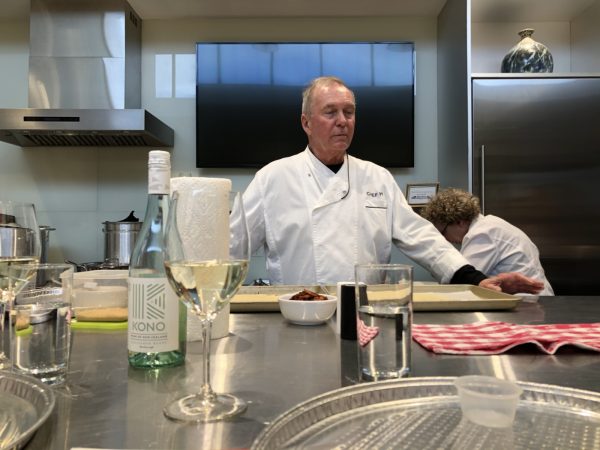 Our class began with making a simple iceberg lettuce with blue cheese dressing, bacon and tomatoes. There wasn’t much to be done here from my part. A couple people in the class prepared the salads for us.

I couldn’t tell you the last time I had blue cheese dressing but this one was very light. I’m pretty sure everybody in the class enjoyed it. 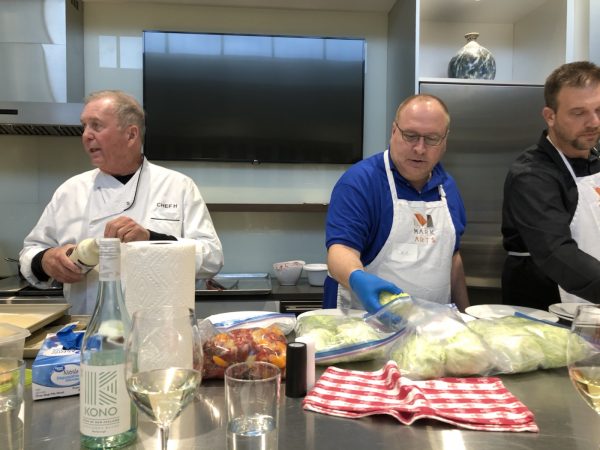 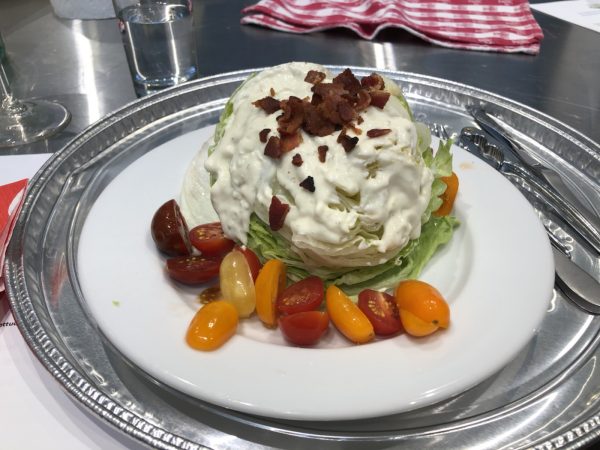 During this time, Chef H walked us through preparing a cherry tart which would be our dessert. Instructions were handed out to everybody so we didn’t have to take notes. This was great for me because I never took notes all through college so there was no point in changing that now. 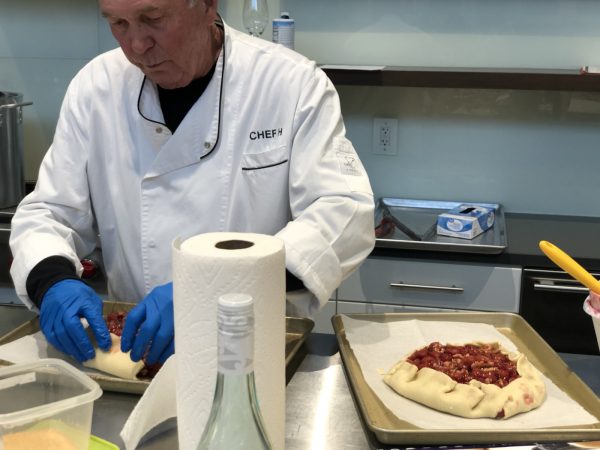 Then came the fun part! The lobsters!

Chef H placed all the lobsters on the table. Everyone was able to pick one up and then watch an instructional video on simple tips on handling lobsters and how to cook them. 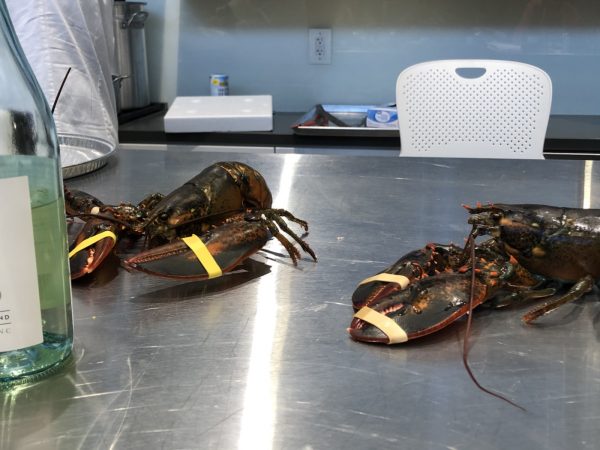 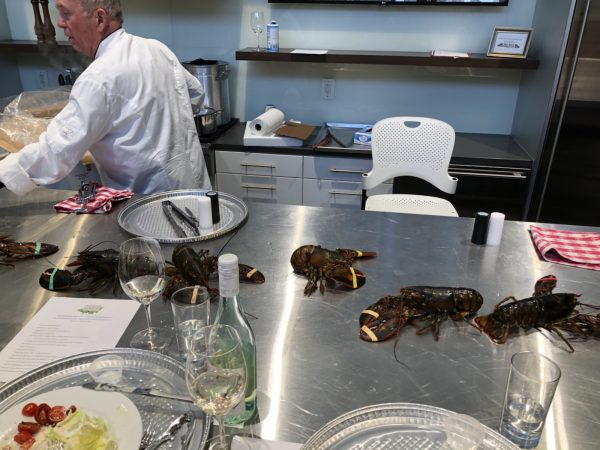 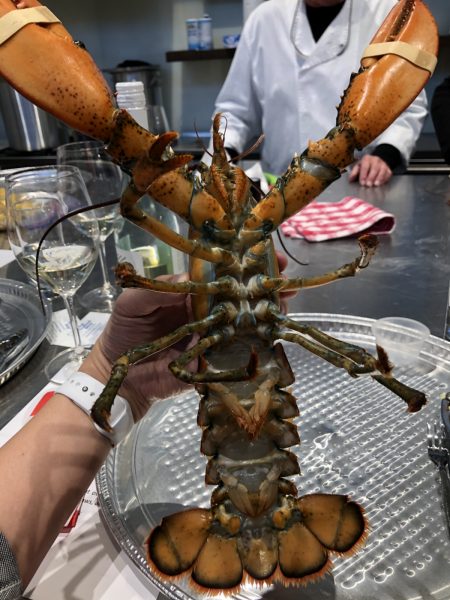 In the video, they mentioned how there were talks about how adrenaline in lobsters alters the meat’s flavor. While this has yet to be proven, we tried it as some people suggest hypnotizing lobsters before boiling to avoid the adrenaline rush. To hypnotize the crustaceans we simply gave them a massage. At this point, their tails dropped and their claws became more relaxed. 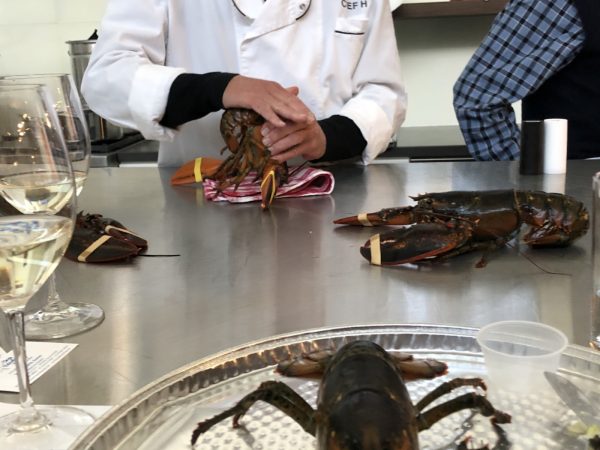 I gave my little pal a massage and next thing I know…..nap time. With an 8-month-old at home, I feel like I’m a pro prepping everyone for nap time. 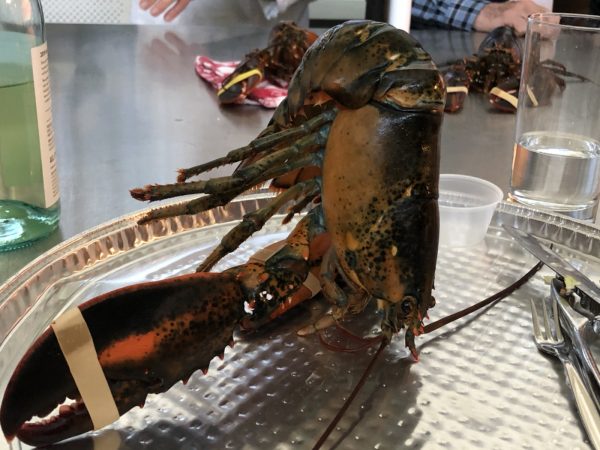 We all snipped off the bands that held their claws together.

If you’re an extreme animal rights activist, now is the time to stop reading.

After that, it was time to put the lobsters in the boiling water. 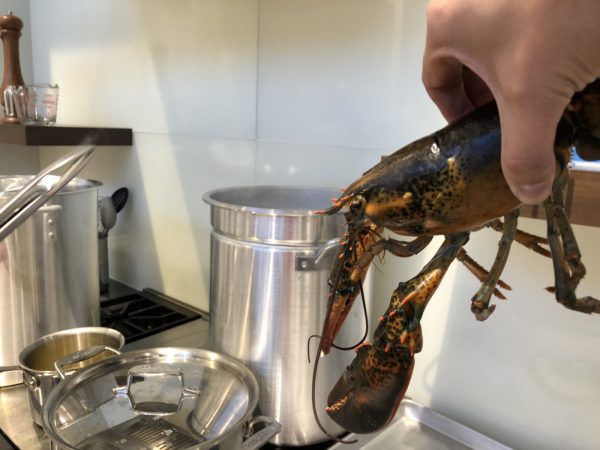 Everybody had aprons given to them. At the beginning of the class, Chef H said whoever has the red apron on would be in charge of pulling the lobster out. Of course, I had the red apron.

When it was my time, I grabbed the tongs and attempted to pull 13 lobsters out of big boiling pots of water. With everybody’s eyes on me, I struggled………….immensely. The lobsters were slipping out of the tongs. The lobsters would fall creating a big splash of boiling water that would give me a fun burning sensation. At one point, I was trying to reach and grab a lobster at the bottom and didn’t realize my hand was actually in the boiling water. In my time to shine, I only embarrassed myself. After what felt like 40 minutes, I was finally able to retrieve every lobster. 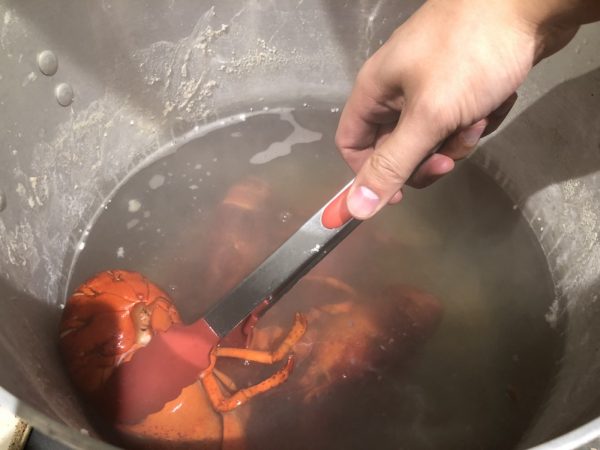 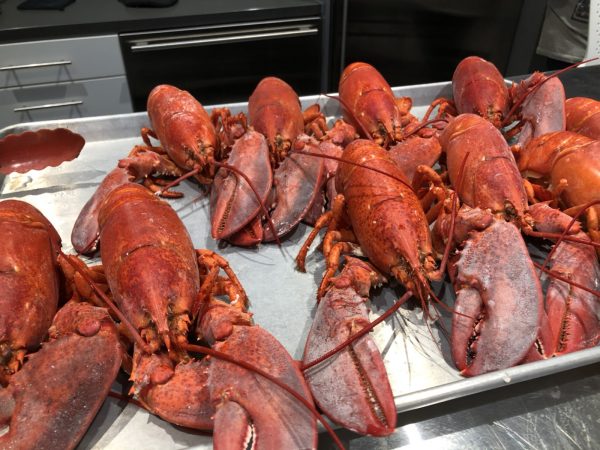 We all then picked out a lobster and set it on our plate. 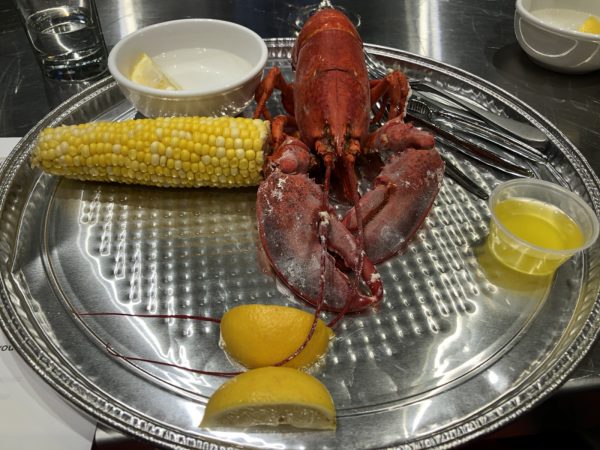 Chef H showed us how to properly eat lobster. This was the best part……. 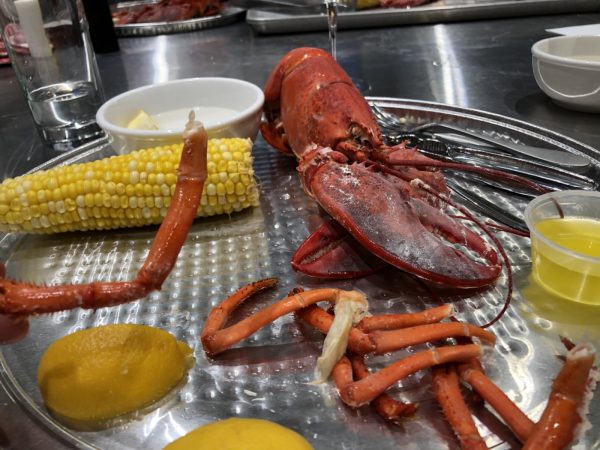 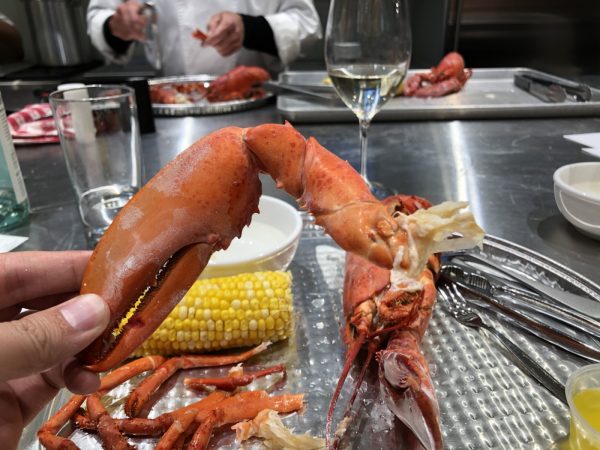 ….until I embarrassed myself yet again. I’m right-handed and grabbed the wine glass on my right. I took a sip and it tasted very different from what I had been drinking on. Then I realized it WASN’T my wine glass! I sat the glass down and nobody noticed but I had to confess. It was the girl to my right’s glass. She admitted she placed it further to her left because she was trying to take a picture but it was still my fault. Then the coronavirus jokes took place. 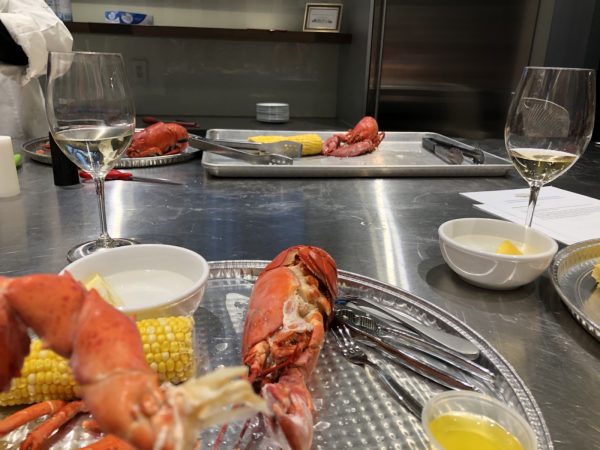 Once the embarrassment was over, I went back to my lobster and ate everything I could. It was incredibly tender, sweet and delicious. I will 100% be trying this at home now. 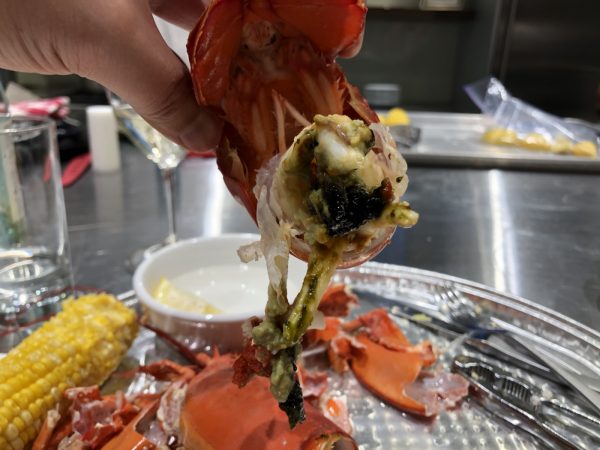 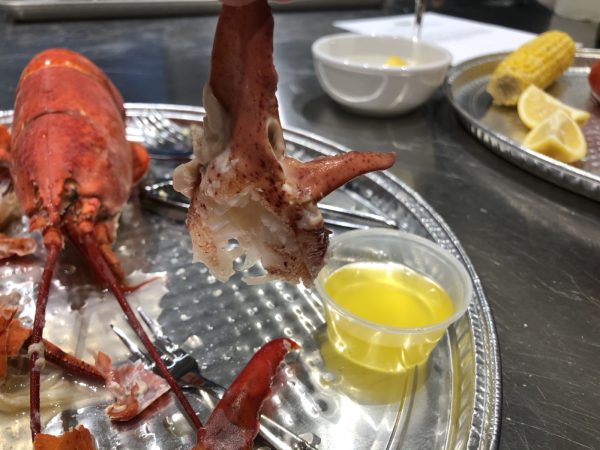 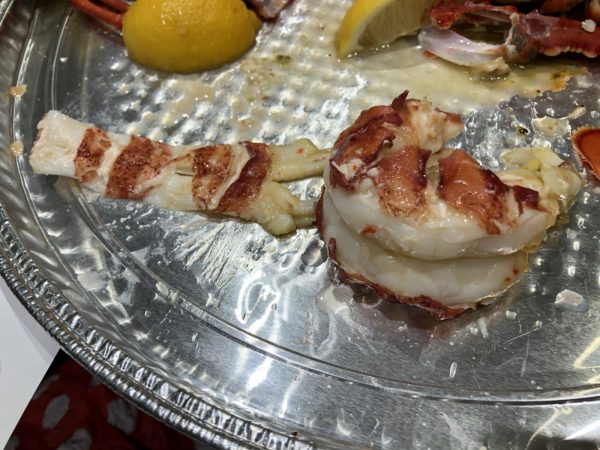 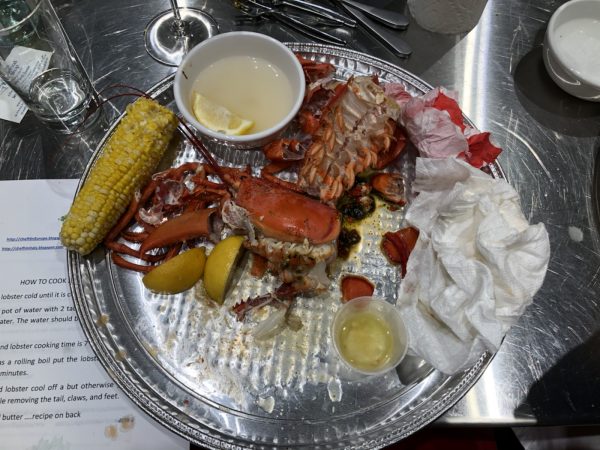 We ended our class with a slice of the cherry tart. It was a great ending to our meal. 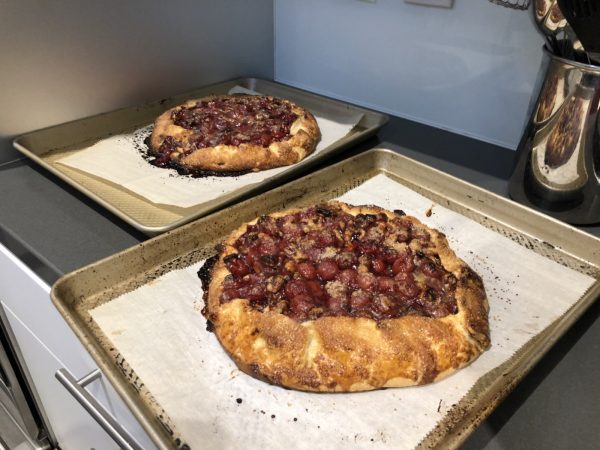 Overall it was a fun experience where I learned a lot. Considering my level of expertise at home is ramen and Spaghettios that bar was already pretty low. But everyone else in the class looked really engaged and listened to every word that came out of Chef H’s mouth with anticipation.

It was the most hands-on cooking class I’ve been a part of. Having it be about a topic like lobster that’s different made it even more appealing. I highly recommend the Mark Arts cooking classes. Whether you’re with a friend, sibling or a significant other, you can’t go wrong. It’ll be a great time.

You can check out their culinary class schedule here.