We started with 68 restaurants and have made it down to 8.

With COVID-19 causing the cancellation of Selection Sunday, we were all left without a bracket to look at. So I put together a 68 restaurant tournament bracket for readers to vote on throughout this stay-at-home order. After weeks of voting, we have finally made it to the EL-EAT 8.

The bracket was broken up into four regions with restaurants chosen to represent each region.

Out of the East Region, Ziggy’s Pizza will face off against Bella Luna.
Out of the West Region, HomeGrown is paired up with Wichita Brewing Co.
Out of the Central Region, Tanya’s Soup Kitchen and La Galette go head to head.
Then out of the South Region, Taco Fajita battles it out with N&J Café.

It was an interesting final 8 with a mix of some massively popular restaurants. One soup kitchen, one breakfast spots, two pizza places, a French bakery, two Mediterranean restaurants and one Mexican hole-in-the-wall.

A majority of the restaurants have had big time success in public polls and even national lists. Some have been around for years and built up old-time followings. Probably the biggest shocker in the EL-EAT EIGHT was Taco Fajita. They have been like the little mid-major who has fought their way in each matchup. Some people may also be shocked at city favorites like George’s French Bistro and Doo-Dah Diner’s exit from the dance. From many messages those were two popular choices for a Final Four finish at the very least. But that’s the nature of social media voting, you never know what’s going to happen! In all 8 of the votes, so many of them came down literally to the final 10 minutes. I expect some more close tallies.

These eight restaurants will begin their quest for a spot in the Final Four this weekend. Voting begins today with all matchups being held on the Wichita By E.B. Facebook page.

Disclaimer: This was and is meant to be all just for fun with the winner receiving nothing but bragging rights. If you’re mad your favorite restaurant still isn’t in it, go eat a Snickers.

I do have ONE REQUEST. When you vote, ask yourself if you’re voting for what you truly feel is the BEST or if you’re just voting to support said place based on other reasons. Obviously there is no way to regulate it but I just wanted to throw that out there.

So with that said, here’s the updated bracket. For better viewing, download your copy here.

Happy Hunger Games! And may the odds be ever in your favor! 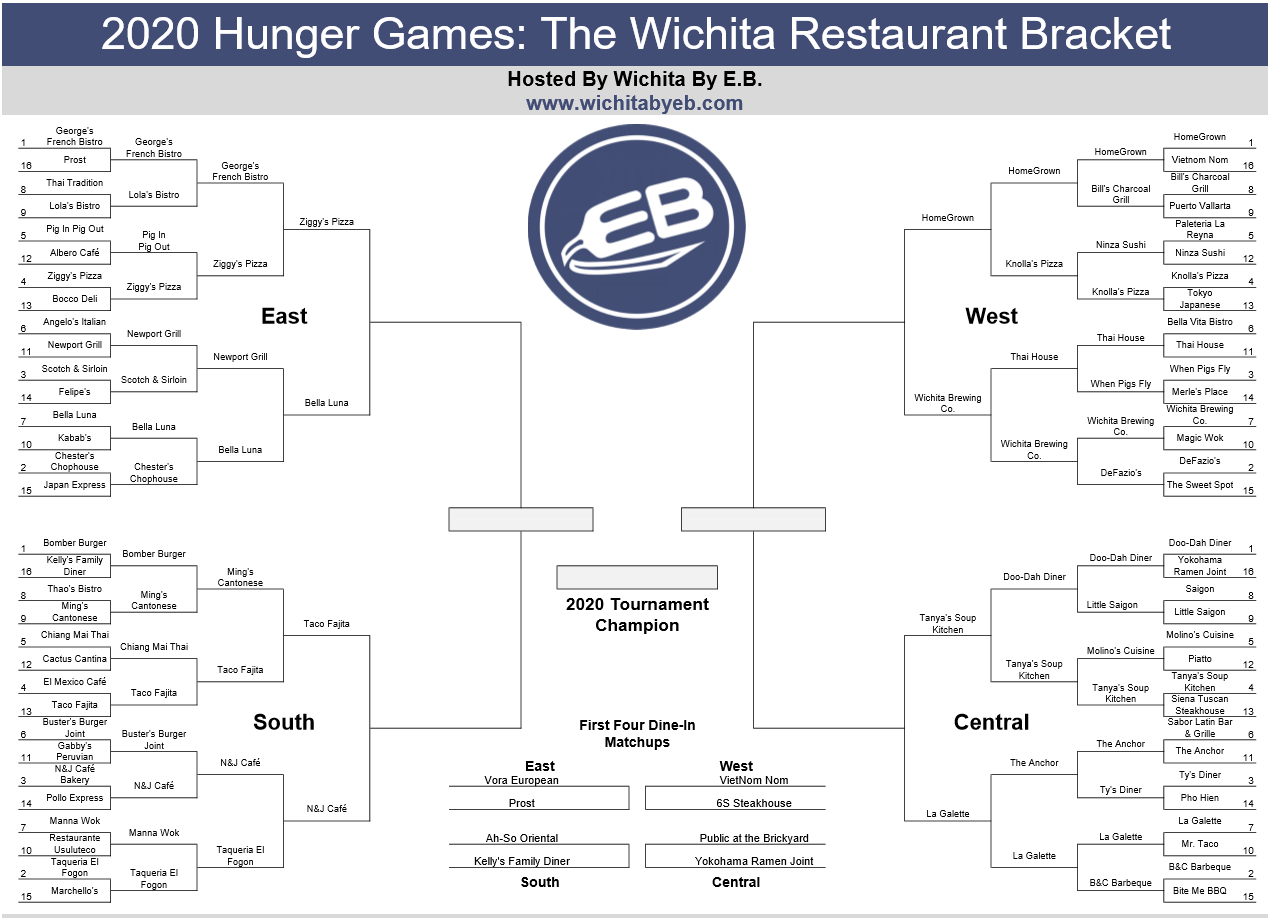 May the best restaurant win.