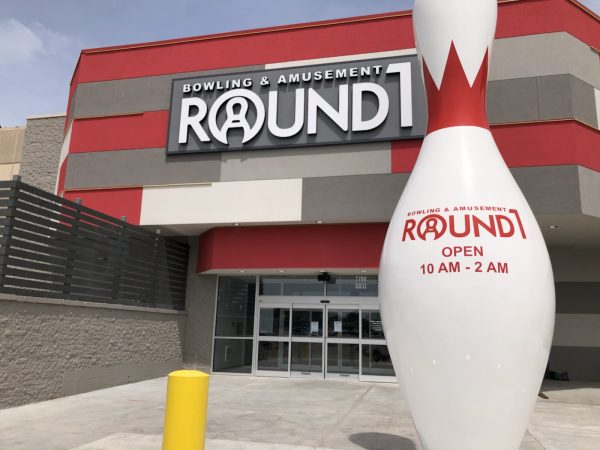 A new entertainment venue finally opened inside Towne East Square on the lower level near JC Penney. The giant 44,000 square-foot-space is now occupied by Round1. They are an entire bowling and amusement center that houses hundreds of arcade games, ticket redemption games and over 40 crane games. There’s also a full bar and food available.

We started off our first visit with dinner. You could either order at the counter or via their kiosk. We figured the latter would make it easier 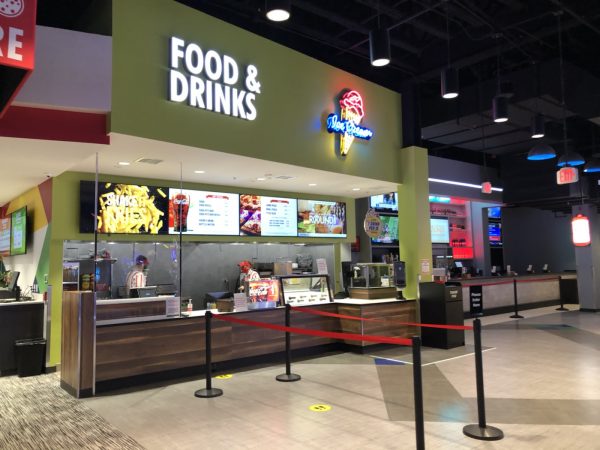 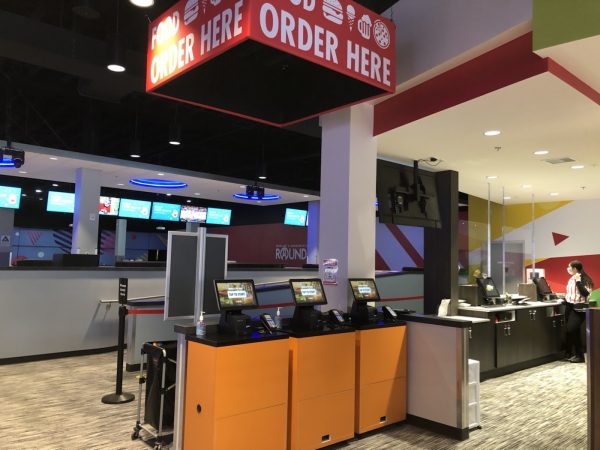 The kiosk was a simple touch screen where you could browse the menu, pay at the kiosk and grab a seat. Our order consisted of a burger, wings, chicken tenders and a slice of pizza; it was all the basics of the menu. We were given a ticket and awaited our number to be called over the P.A. system. Well 30+ minutes went by and we saw numerous customers who ordered after us already eating. I decided to walk up to the counter to see what was going on.

Come to find out our order was never sent over. It was literally in limbo. The cashier appeared as if she didn’t know what to do so a manager of sorts came over to assist. The manager looked at my receipt, looked at the computer system, hit a couple buttons and walked off. A sorry from them would have worked wonders. Our server was later apologetic and our ordered arrived 45+ minutes later.

Here’s what we received:

This burger was $5.49; no sides. It’s not going to win any beauty pageants nor would it win any blind taste test. It was dry to the bone and very unappealing.

You take look at this burger and let me know what you think….. 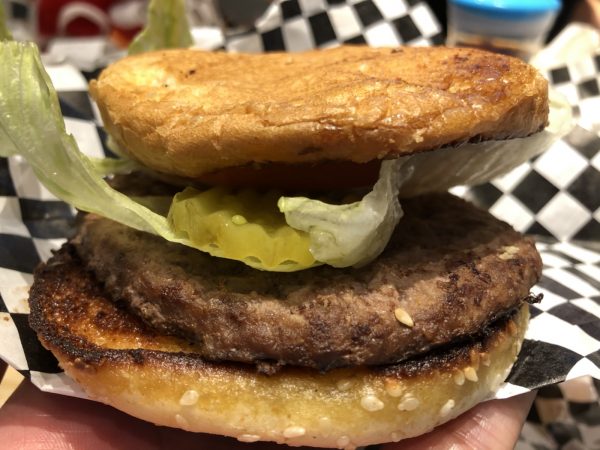 We also had a slice of pizza for $2.99. It was decent and very similar to your typical mall pizza.

Then we had some basic appetizers commonly found at snack bars in chicken wings and tenders. The tenders were a little on the tough side, the fries were in dire need of some salt and the wings were mostly breading with very little meat inside. Best part about the appetizers was the ranch. Is that a good thing? 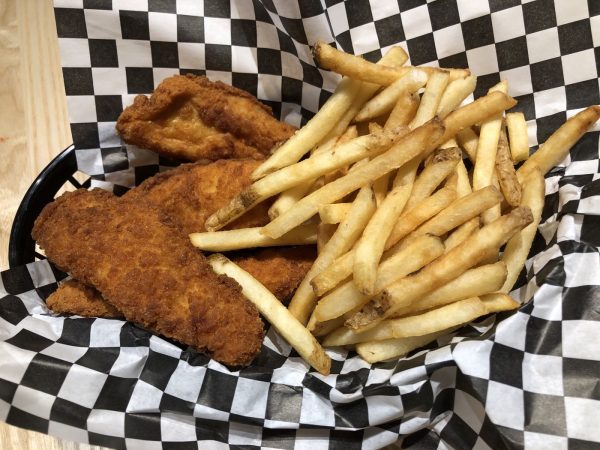 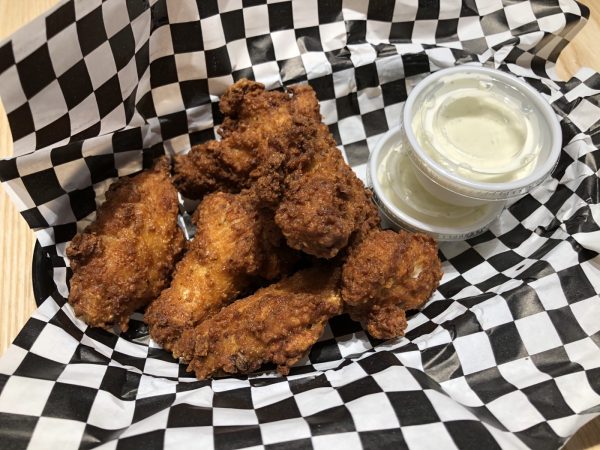 I never order pop while I’m out but a medium size cup runs $2.50 with no refills. Every refill was $1. On the bright side, they carry Mr. Pibb if you’re into that. But if you’re an avid pop drinker, beware as it could get expensive. That much money for pop is almost highway robbery. 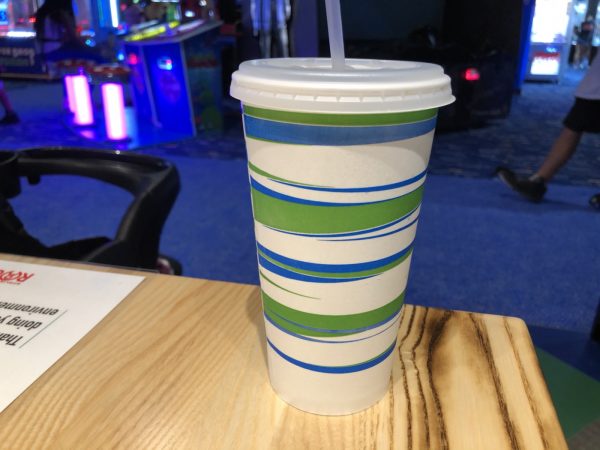 Bottom line the food was essentially what you’d find at a bowling alley or snack bar but done in with little effort and with a high price markup….. and if you’re lucky like me, long wait times. Much better food could be had at the food court for better prices.

So most people won’t go there for the food. Other amenities there include a bowling alley which we will eventually make it back to since we love to bowl. 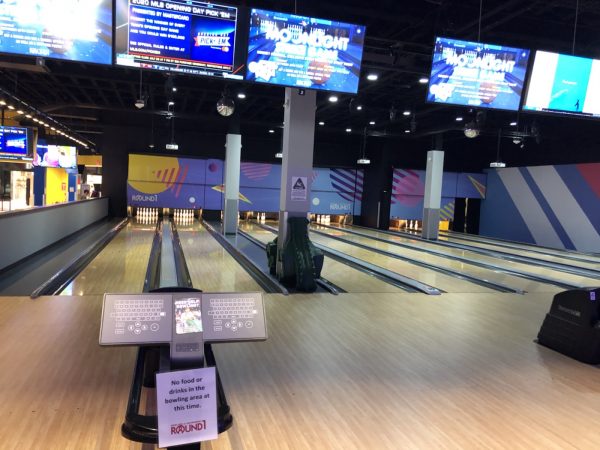 There are also party rooms and private karaoke rooms. At the moment, the private rooms were not available to rent. I wasn’t sure about the karaoke rooms but I did one in Seattle and it was so much fun. If you’ve never experienced a private karaoke room with just friends, it’s a blast. You just sing whatever you want for as long as you want without having to wait hours. 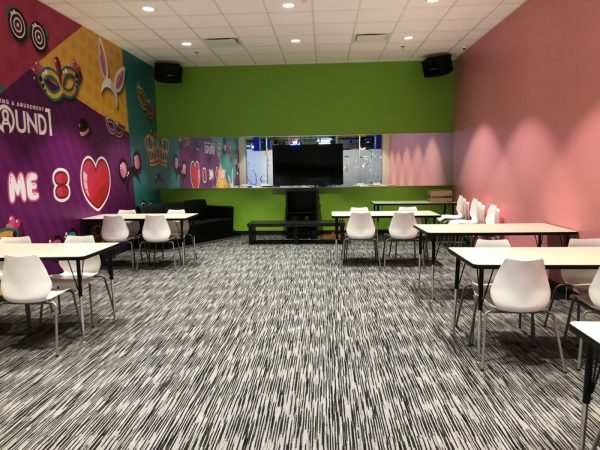 There was also a bar that wasn’t open yet. Definitely going to need that around for karaoke. 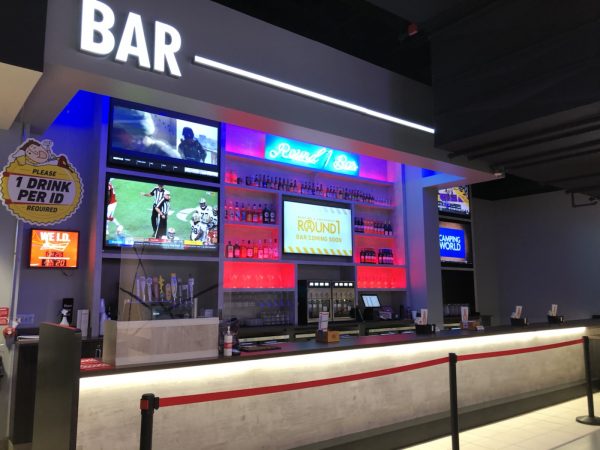 Four pool tables also sat towards the back of the center. 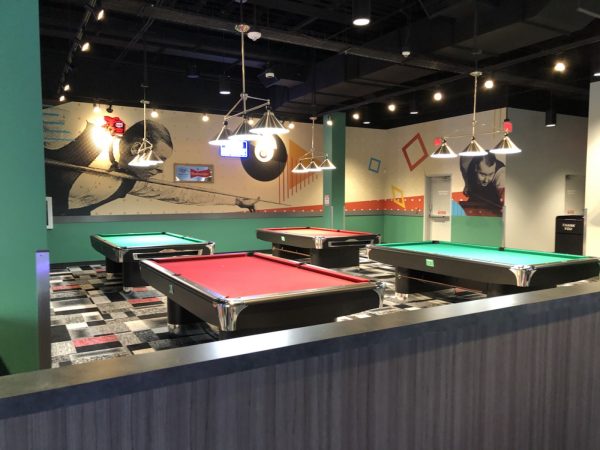 The biggest draw to Round1 are the games. It’s like many of establishments around town, where you get a refillable card to play games with. 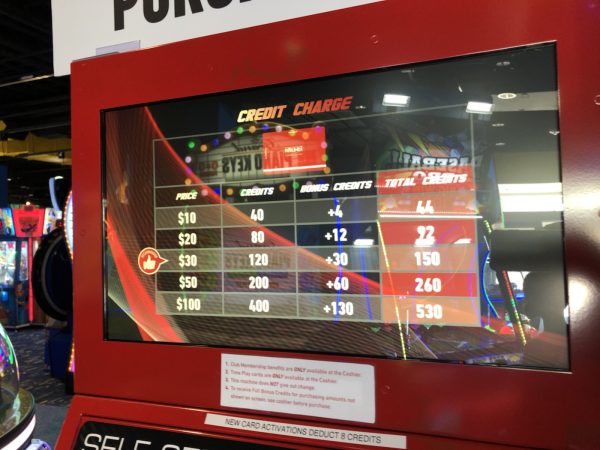 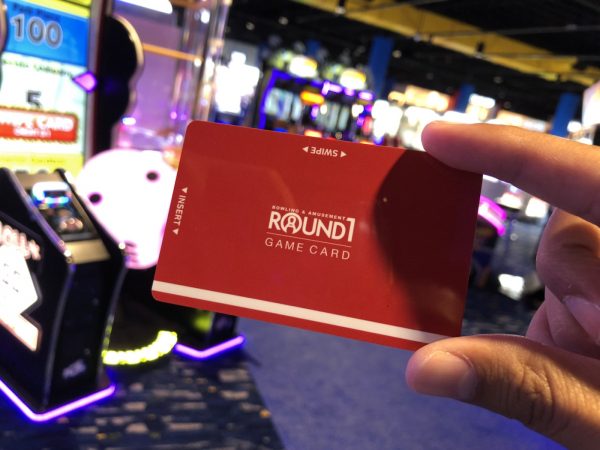 As mentioned earlier, there were a ton of different games to play. The variety seemed to surpass that of Dave & Busters. Most games there took roughly $1-3. For example the crane games took 4 credits for the smaller toys, 7-9 tokens for the medium size toys and then 12 tokens for the largest toys. I saw many kids walking around with medium size toys.

I walked away with a small handheld Yoshi plush for my daughter; only took me 5 tries. 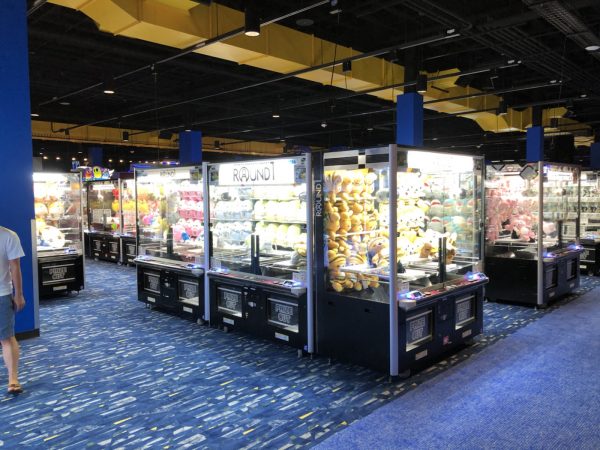 Here’s a small look at some other parts of the gaming area and the redemption area. 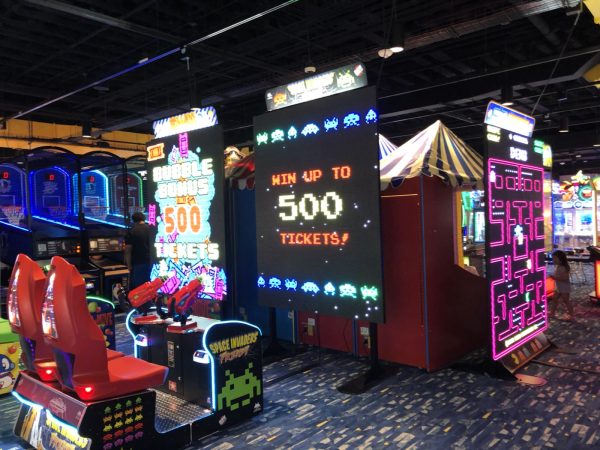 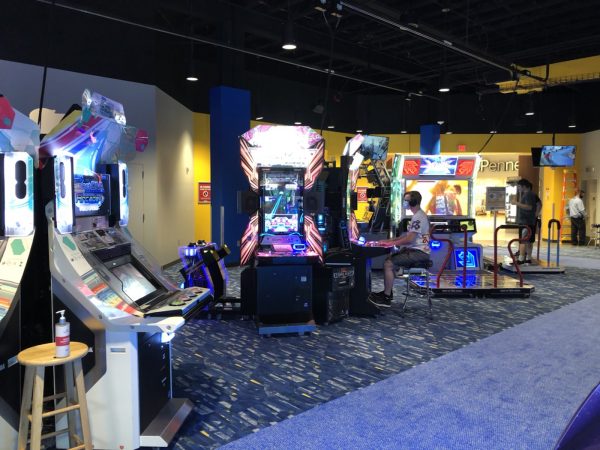 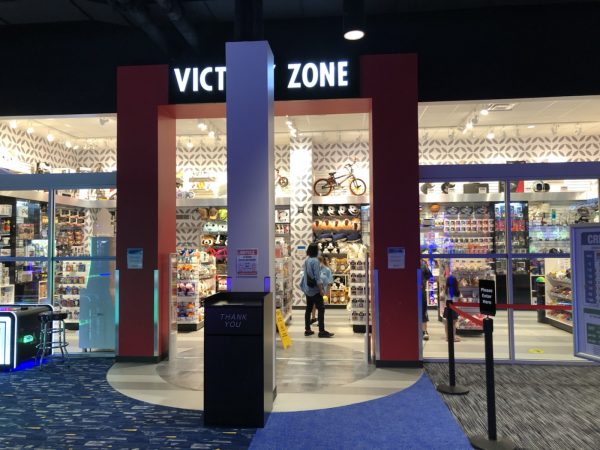 Some games weren’t without issue though. We love air hockey and they had one of the 4-player air hockey machines. Unfortunately that had an issue which required us having to find a person to help us and then walking all the way back to the corner of the building to have them reload our card. 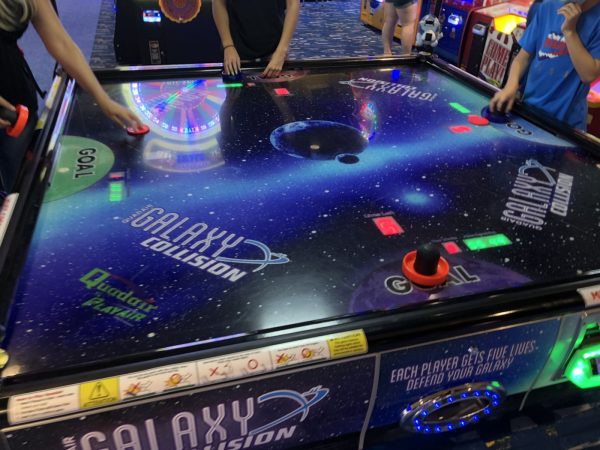 Between the issues we had, I figured I should just relay my experiences to a manager. The response I received was, “I’m sorry. Regarding the food there isn’t much we can do about it but I’ll relay your information. (Regarding the games) Sorry it’s our 3rd day.”

I totally get having issues and normally would be all fine about it and move on. But this is a national chain that should be a well oiled machine. If I spent maybe $20-50 there, I’d be OK with the issues. But we spent close to $200 on our visit. That’s not exactly chump change nor an affordable evening with the family. So if we or anybody is going to drop that much money for a family outing, it should be enjoyed by all. A family amusement center by definition should be amusing to all. Instead, we just felt annoyed and ripped off by the whole experience at Round1. Most of the regular staff was working hard but anybody who appeared to be wearing some sort of management attire looked inconvenienced.

I suppose if you’re going strictly for the games, it’s probably going to be fun for you.

What sucks is I was rooting hard for this place. I love this style of entertainment and would always go back if we had a good experience. It may take me a while to return after feeling like our money was wasted on a bad outing. And that’s too bad because I would love to go back soon for the karaoke and bowling. 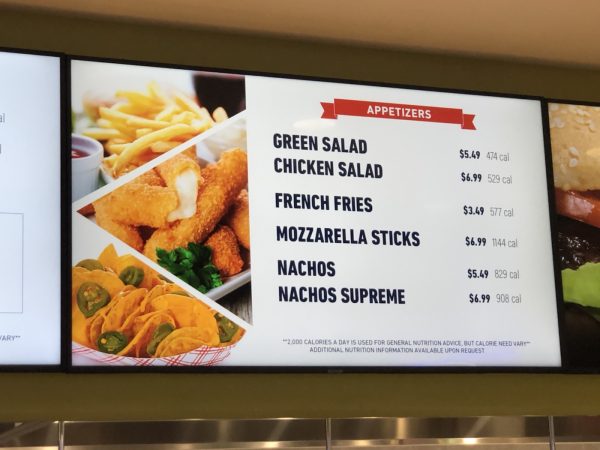 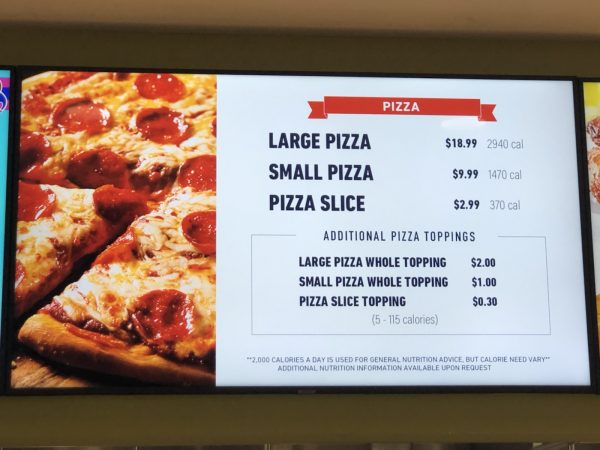 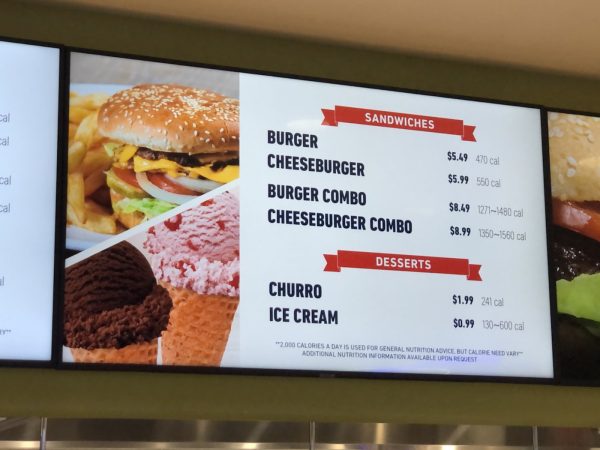 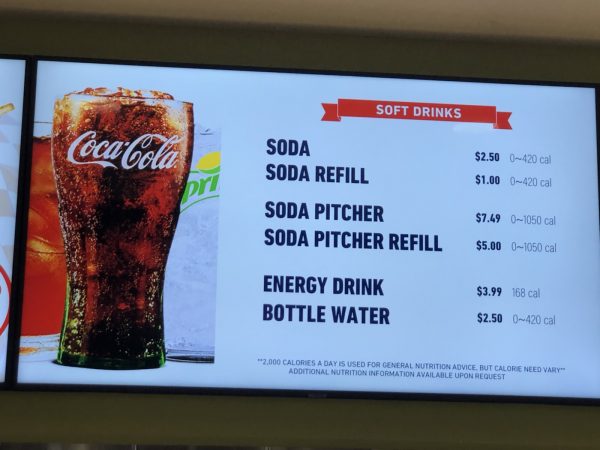 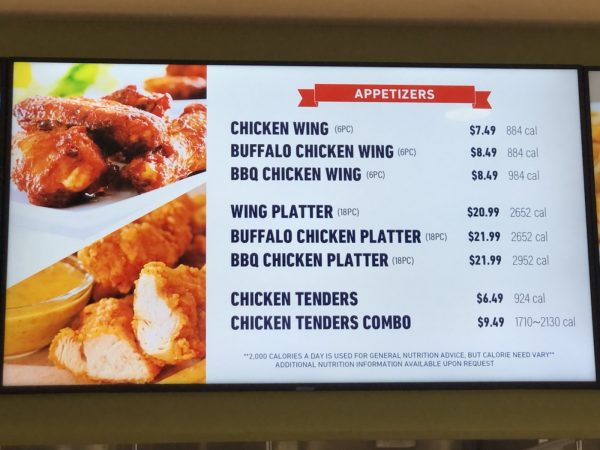