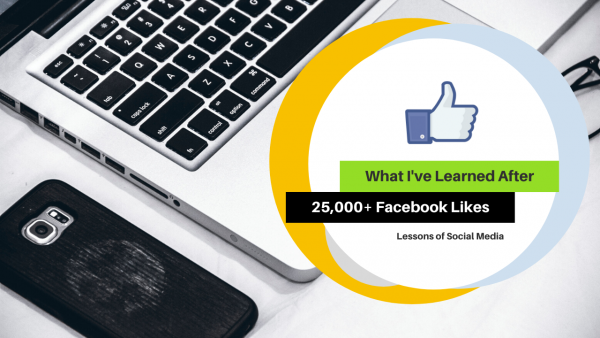 It’s taken me 9+ years but I finally did it. My Facebook page has reached 25,000+ Likes and 26,000+ page followers. Literally less than a year and a half ago, I was at 10,000 likes. I made many changes in content and community outreach over the last 17 months and had a 150% increase during that time.

The road to 25,000 was hard. It’s even harder if you’re not a business selling a product, a celebrity, a sports entity or a very attractive person posting a ton of selfies. I’m none of that and as far away from the latter as possible. I’ve learned a lot about social media and blogging over the past nine years. A local busienss owner asked me recently what I think got me to this point. He was looking for tips on how to grow his audience, so I went home and thought about it while eating a microwaveable burger. Here’s the road I took and what I’ve learned.

Stay Genuine and True to Yourself

This is probably the biggest thing ever. Of course there are going to be detractors and haters who question everything you do. But as long as you believe in yourself and stay true to who you are, that’s all you can ask for. Sometimes it’s hard to deal with the haters… I, of all people, can’t just sit back and stay silent all the times. But the majority of people out there have a brain and some sense of stability to recognize genuine from disingenuous.

An example of this was about five years ago. I had a billboard company reach out to me and ask if I would be willing to partner up to make a little money. The pitch was they would sell billboard advertising to clients and I would write reviews for those clients as part of a marketing package. While I could always use the support to help cover the cost of the blog, I turned it down. I have no problem writing a blog for a company to highlight what they do and give them exposure. But in my right mind couldn’t write a review over every client. Look at some of their billboards, they had some ads of places I could not support simply because I just wasn’t a fan of their product. I believed people would see through it because I put my voice into my writing.

Don’t Let Others Control Your Narrative

This everyday. I write about all restaurants and nearly any business. For me, there’s no restaurant I wouldn’t step into once to try. Many people out there have beliefs that I should only write about one thing or another. I often get the comment, “You should stick to food reviews.” I’m that asshole rebellious person that will do the exact opposite out of spite. Nobody likes being told what to do. That’s me times 100.

An example of this #Saturchains which is a segment on the blog where I write about national chains. Last year, my parents and siblings wanted to get dinner together. The only place that could accommodate a group of our size on short notice was Olive Garden. So I went and wrote a review about it. Comments and messages came through upset I would write about a national chain with some people saying I need to be supporting local…. as if I don’t eat out at local enough. So what do I do? I started writing about one national chain on a weekly basis.

It’s OK To Have A Different Opinion

Whether it’s an opinion on a social topic or a different opinion on a business, it’s OK. People have different experiences and opinions of things. It’s not the end of the world if your view doesn’t align with someone elses. But we also live in an era of social media where hate comes out on a minute by minute basis. A negative review of a popular place is like flies on a piece of meat on a hot summer day.

But a different opinion also leads to people twisting your intent. An example of this was back in June. During the height of protests and riots in Wichita, I made a post asking people not to damage our businesses. My whole goal was to promote standing up for what you believe in without hurting our business owners who have been through enough because of COVID-19. Of course people then twisted this into me not supporting the BLM movement. These were people that didn’t know me or what I’ve done in the community but whatever, right? I had multiple messages blasting me, one of the Wichita Councilman’s board members call me a shitbag and many others telling them they were going to unfollow my page. Oddly enough, I’m not the Wichita Eagle or Wichita Business Journal. If people choose to unfollow me or “unsubscribe”, it’s not lost revenue for me. But what happened after the shitstorm for this shitbag? 41 people unfollowed my page but nearly 300 new people liked it. In the end it was OK to have a different opinion. People may disagree with you but others will respect you for standing up for it.

Bottom line: Don’t back down.

Give People the Content They May Not Necessarily Want….. But Deserve

I know my niche audience, I’m not an idiot all the time (just 20% of the time). It’s restaurants and to an extent family style entertainment options in town.

Every now and then I like to take a break from the norm and branch off into whatever randomness my mind thinks of. Whether it was trying out Banquet meals or ranking videogames, people appreciate something different too. I think it gives yourself a break and not feel so robotic as to what you’re doing.

One of the biggest things about social media is engaging with others. One of the easiest routes many places take is online contest, giveaways and promotions. Those are great and they work. But you’ll also want to try different things. Sometimes it doesn’t go as planned and other times it works perfectly. I’ve always wanted to engage with readers and followers and have them feel like they were a part of some of the content that’s pushed out. Sometimes that’s simply done by asking their opinion on favorite places around town, posting a picture of a menu and asking what they’d order, or asking yay or nay on a food item.

The best example of this is the occasional “Most Liked” tournament brackets that highlight all of the dining options around town. It’s simply a tournament bracket of restaurants and other dining venues around town. People go on social media to vote on their favorite places. It’s not meant to be anything serious even though some do take it that way. This has been a highly effective way to engage others and at the same time highlight one of my objectives, introducing others to new places within said bracket.

The other way to engage is through comments on your posts and responding to DM’s and messages. I’m constantly bombarded with messages but try to make an effort to respond to 90% of them. The other 10% are usually people messaging me to complain or worse yet ask for directions, hours of operation or phone numbers to a place. I’m not your damn Google Assistant. It’s not “Hey Alexa by E.B., what is…..”

Give Back When Possible

I think it’s important to give back. It’s something my parents taught me at a young age and led me to volunteer in many groups and organizations around town. One of my biggest dreams/goals I always wanted to do was have a restaurant week style of event. I figured my page at the time had a good enough following I could possibly make it work. Thanks to many of the restaurants who jumped on for the event, we were able to raise thousands of dollars for the United Way. It was a very homegrown and organic event that was mostly publicized by local bloggers and influencers. United Way sent out a press release for the event that was largely ignored and not picked up most media outlets so I had to rely on social media to get the word out. Fortunately so many other influencers helped out and it was a great way to kind of partner up with others out there who have the same goals.

In the future, I would like to do another restaurant week style of event where no money is raised and the entire goal of the event is to support our struggling restaurant industry.

Branch Out From Your Home Base

I’ve driven out to Mulvane, Rose Hill, Newton, Colwich, Derby, Haysville, Maize, Andover, etc to cover restaurants and businesses in those areas. To my knowledge those restaurants are highly covered in the media so it’s cool to use this platform to give those places some love too.

I have always said that the moment this feels like a job, I’m done.

Wichita By E.B. started off as a fun minimal hobby where I’d write around once or twice a month. It was fun and at times can become addictive to me. I highly enjoy writing and engaging with others and hopefully people can see that. I have fun writing about whatever and sometimes poke the bear online for the hell of it. I try to not take everything so serious even though sometimes I’m guilty of it. But for the most part, it’s really all fun and games for me.

I want to have fun and enjoy Wichita. My hope is others can do that as well.

So now that I’ve hit 25,000+, it’s time to evolve and transform. That’s exactly what I’ve been working on with the new Wichita By E.B. Directory / Dining Guide. It’s probably a week or so away from completion and the beta rollout with blog supporters will begin.