While out in Denver, some friends introduced us to Hop Alley, a casual restaurant and bar focused on traditional and regional Chinese cuisine served mostly in family-style dishes. The menu also features Taiwanese, Cantonese, Sichuan, Hunan and Chinese-Muslim influence dishes.

Hop Alley isn’t your traditional Chinese restaurant where you’re given an expansive menu of 100+ different dishes. They paired it down to 15 items. In doing so, they focused on being unique and inventive.

We spent the evening dining and drinking on an array of delicious dishes and amazing cocktails. The ambiance was right up there with the best. They had tables set up outside underneath the stars. The weather was extremely cooperative with a cool 70-degree evening.

Our dinner consisted of eight different dishes and multiple cocktails and glasses of red wine. Too focused enjoying the company of friends, I managed to only get a handful of pictures. 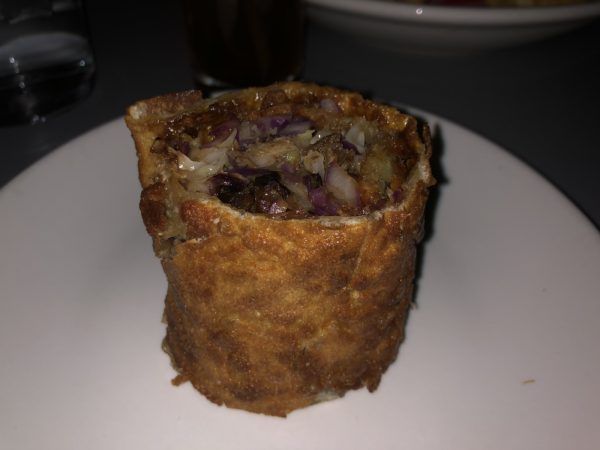 To say everyone was impressed would have been an understatement. Our dinner conversations were mixed in with many oohs and aahs, as everybody couldn’t stop raving about the food. The dishes were brought out one by one. We were all able to take in each one, savoring every single bite, and then move on to the next surprise. We left the ordering to one person so everyone anxiously awaited what was next to come.

My personal favorite of all eight dishes we tried was the Beijing Duck Roll which was smoked shredded duck rolled up in a scallion pancake with hoisin and cabbage. The duck was tender and nearly melted in my mouth. The scallion pancake gave it a crispy delectable texture that held the entire meal together.

Another one of the favorites was the Hong You Chao Shou which was a boiled pork & pickled cabbage dumpling. The dumplings were dressed with chili oil, smoked soy and peanuts to give it salty kick with an immediate blast of heat at the end. I may have had 3-4 dumplings out of the plate.

Not pictured but a table favorite was the Xi’an Spicy Fried Potatoes. They were crispy fried potatoes with peppers and sichuan peppercorn. It was interesting because the spiciness hit everybody unlike any other dish we’ve all ever encountered. It was a refreshing tingle that lasted long after each bite.

Hop Alley was flat out amazing from start to finish. Every dish had an amazing flavor profile; items that left us trying to decipher every single ingredient. It was apparent they made an effort to stray away from the typical Chinese fare; and they excelled. The service was as good as we’ve ever had it at a restaurant. They were attentive, engaging and just fun to talk to.