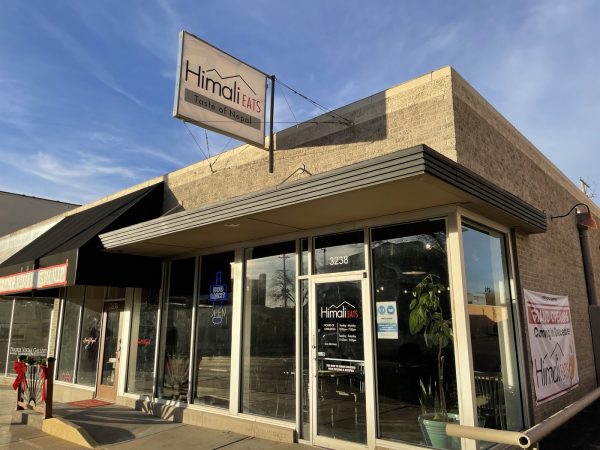 It’s been long overdue but Wichita finally has a dedicated dumpling restaurant. Himali Eats is a restaurant located in the original Noble House space on east Douglas that specializes in a type of dumpling called momo. It’s a traditional delicacy in Nepal, Tibet and the owners hope to introduce the Wichita community to more Nepali food over time.

There aren’t many tables inside especially when you consider the socially distanced seating inside the restaurant. 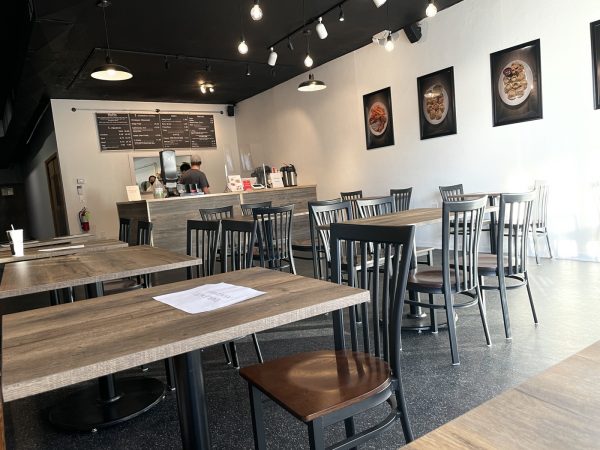 Himali Eats officially celebrates their grand opening on Monday but had a small soft opening over the weekend.

As stated earlier, the main feature of the restaurant is MoMo. The dumplings which have a similar appearance to Chinese dumplings have different spices inside them to offer an Indian-style flavor to it. Every single dumpling is handmade which can be a tedious and time-consuming process but immensely better than the frozen dumplings found all over town. You can even peek into the kitchen and see the staff working hard at making them one-by-one.

When you arrive, you choose the type of protein you want in your momo (chicken, pork, beef or vegetable). They can be ordered in 8 or 12 pieces.

From there, you select your cooking style. The traditional Himalayan style is steamed. For 25-cents to $1.99, you can have them deep-fried, pan-fried, dipped, or sautéed.

There are four sides to select and two sauces to dip your momo in if you’d like. 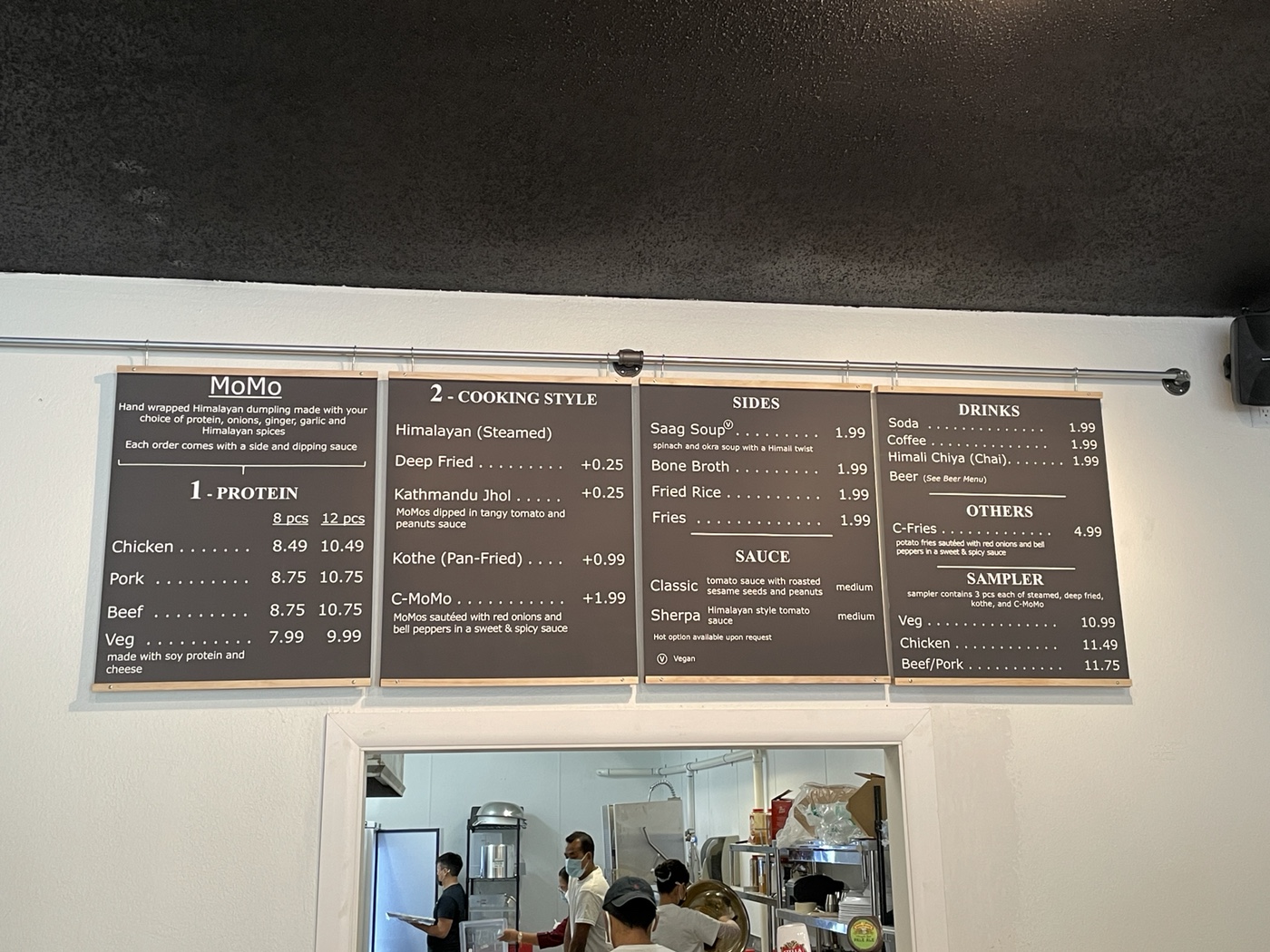 For the uninitiated, there are also samplers that include 3 of each style but unfortunately that option wasn’t available on their system when I stopped by. It would have been perfect to get a taste test of all the options. Since it wasn’t, I went with some pork steamed momo and their chicken momo in a C-MoMo style which was sautéed with red onions and bell peppers in a sweet & spicy sauce.

For my sides I went with the fried rice and the Saag soup which was spinach and okra soup with a Himali twist. All the food came out quickly. 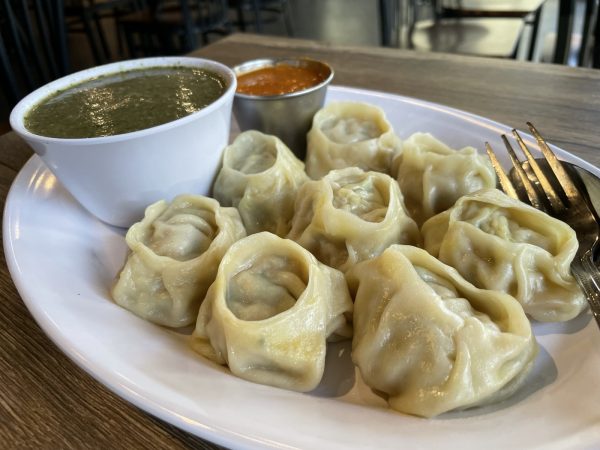 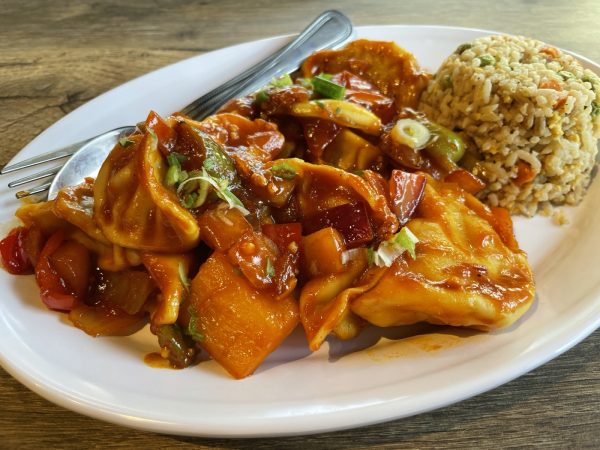 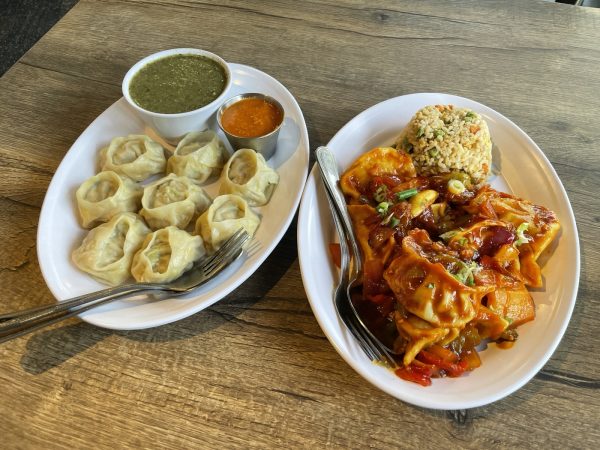 The Saag soup was interesting and something I’ve never had. It had a mild flavor with a rich texture to it. My entire focus though was the momo/dumpling.

Between the two, my favorite was the chicken momo sautéed. The dumplings were huge. I ordered way too much food for one person. I loved sauce that came with the C-MoMo style. There was a small sweet flavor followed by a bit of heat in each bite. The onions and bell peppers gave the dumplings some more texture. It was an extremely flavorful dish.

As for my steamed pork momo, they came with a side of their classic sauce which was a tomato sauce with roasted sesame seeds and peanuts. It tasted like a simple tomato sauce. After ordering, I saw they had a hot option available I should have asked for. The steamed momo had the picture-perfect texture that was like heaven in my mouth.

The most significant thing for me was how fresh the momo tasted. It was a breath of fresh air compared to all the other dumplings around town. The next was the difference in how they tasted compared to your Chinese dumplings. I’d say the Nepali flavor is a bit milder than traditional Chinese dumplings. Perhaps that’s where the sauces come into play.

I was talking to one of the employees and they already have plans to introduce more dishes, flavors, meats and even soup dumplings in the future. They wanted to keep things simple and straightforward from the start and slowly introduce diners to different Nepali offerings.

I’m pretty excited to see what else they have in store for the Wichita dining community. Once they release soup dumplings, I literally might buy them out of all their inventory.