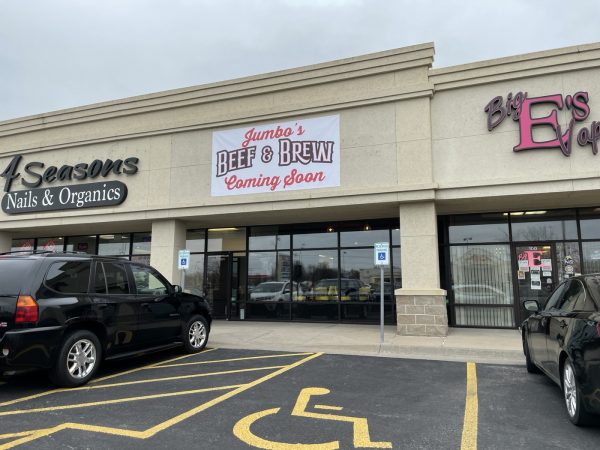 Wichita just gained a new restaurant this week and let me tell you, this one is exciting. Jumbo’s Beef & Brew recently opened in the former Donut Whole East and Hurts Donut space at 3750 N. Woodlawn. They did a complete transformation of the donut shop and turned it into a lively restaurant and bar that should be a huge plus for the neighborhood.

The interior gave off a very chill vibe. There was a full bar with some TV’s and plenty of distanced seating to go around.

One of the underrated aspects of some restaurants is music selection. It’s something I rarely talk about but it was one of the first things I noticed when I sat there eating. Lots of upbeat music from the 90s and 2000s or as one of my friends refers to as “bangers” played throughout the night and brought back some great memories. 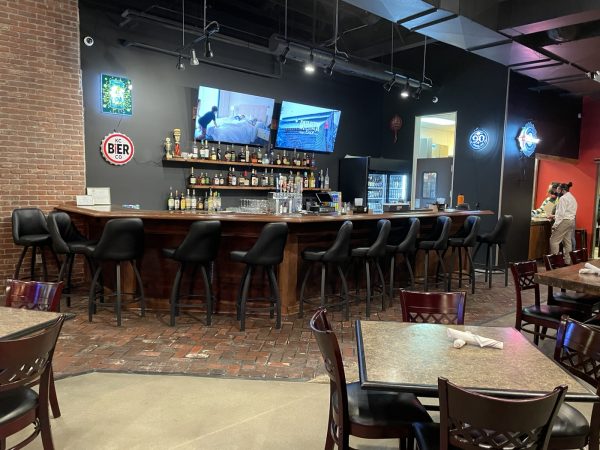 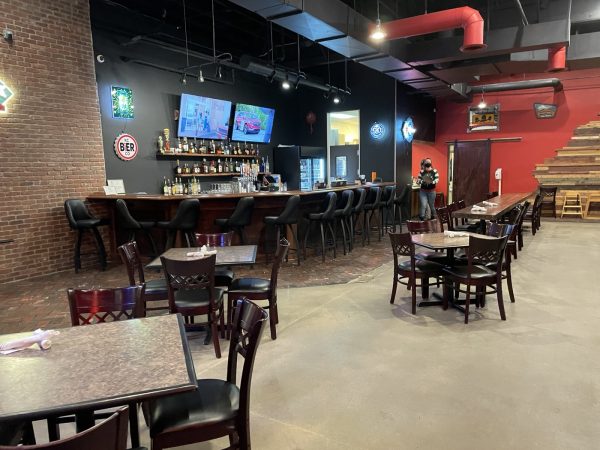 But you’re probably here to learn about the food, not the music. Jumbo’s Beef & Brew serves burgers made with 8oz. Wagyu beef, Chicago-style Italian beef sandwiches, wings, and more. Jumbo’s is the only restaurant in town that strictly makes their burgers with premium ground Wagyu.

I was joined by family on this visit and we started our dinner with some jalapeño poppers and Wagyu meatballs. Both were fantastic starters especially the meatballs which came with a light refreshing marinara sauce. We split the three meatballs between the three of us and loved every bite. I’m not much of a jalapeño popper connoisseur but my brother did note how the thin breading was a nice touch and kept the focus on the pepper itself. 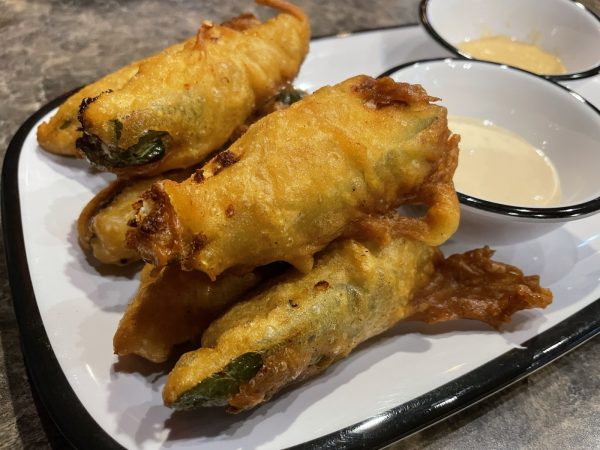 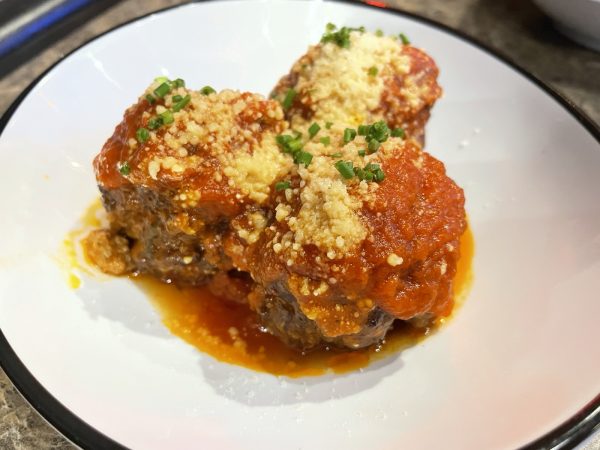 From there we moved on to the sandwich portion of the menu and had the Jumbo’s Beef which was braised beef with hot Giardiniera and sweet peppers. We opted to make it wet and have it dipped.

Starting off with the bread, it stood up wonderfully. At not point did the bread lose its shape, become overly soggy or fall apart. It had the right amount of pull on it while still being very soft. We added both sets of peppers in the sandwich which added some extra pop. Eating a sandwich with strictly beef could get dull after a while but the Giardiniera and sweet peppers enhanced the entire meal. 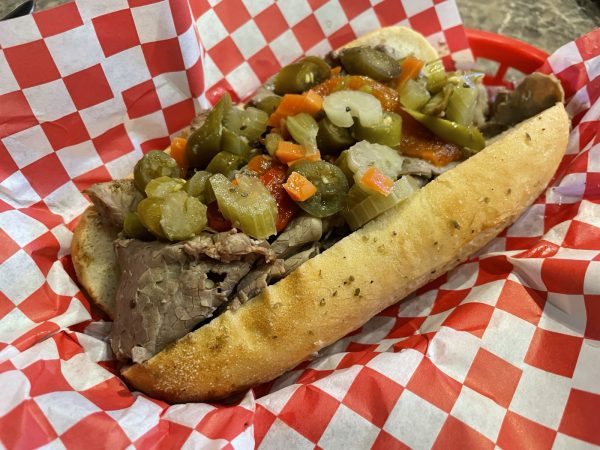 Up next was the chili. I took one small bite of it and could definitely tell the quality of the meat at the start. It wasn’t greasy, super runny or anything, just a good bowl of quality chili. 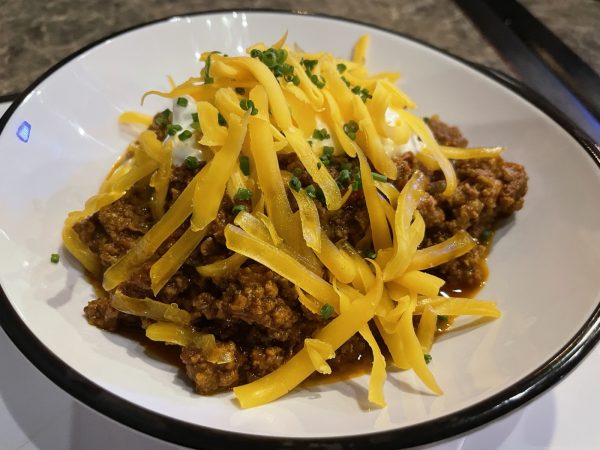 And what kind of visit would it be without trying out some of their signature burgers. Here’s a visual look at each of the burgers we had.

Starting off with our favorite burger of the night: K-Pop which was Korean BBQ marinade with fried egg, mozzarella, crack sauce (a house made signature sauce) and frizzled onion.

It was an expertly designed burger that delivered from all angles. Jumbo’s definitely knows the bread game and delivered on another quality bun. Of the three burgers we tried, the K-Pop was my favorite possibly because the Korean BBQ marinade and fried egg was everything and the crack sauce just might have been real quick…. total assumption and I’m probably wrong. But dang, it was so delicious. 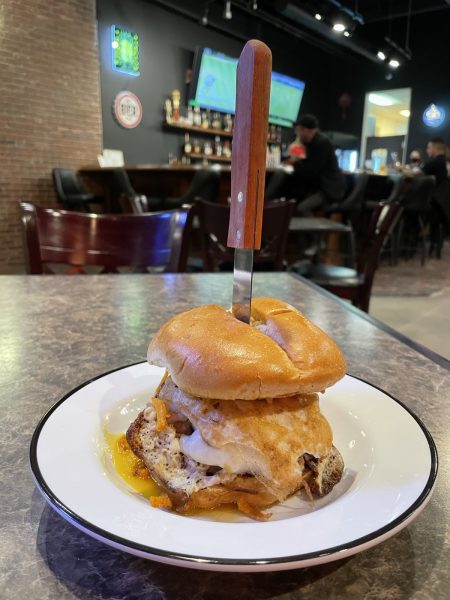 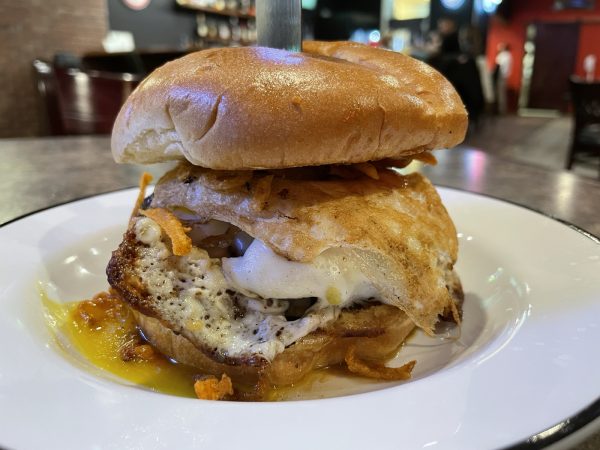 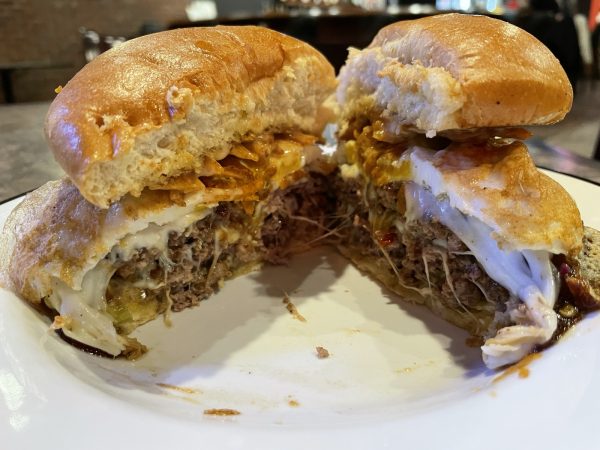 Our next burger which was also a hit was the Cheese Bomb which included fried mac n cheese, caramelized onions and Applewood smoked bacon.

All the burgers were heavy and filling but this was taken it to a whole new level. At first glance, we thought we received a different burger. It looked like an onion ring but after cutting into it, we realized it was the fried mac n cheese. Between that, the half-pound patty and the thick cut bacon, we weren’t sure if we were going to walk out of the restaurant or be carted out. 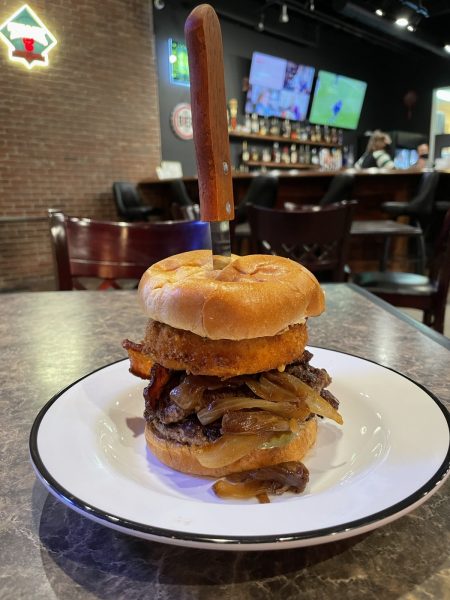 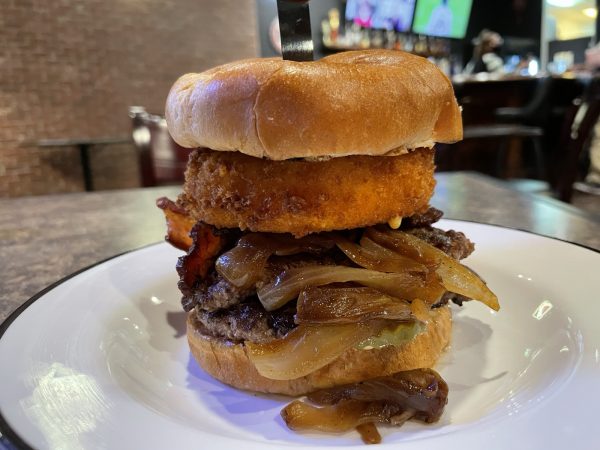 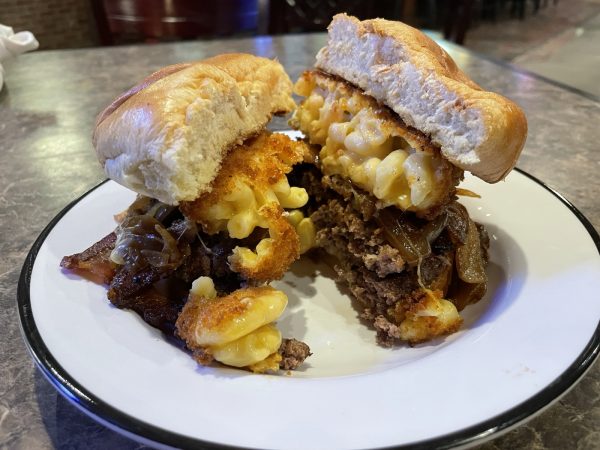 And the last burger of the night was the Double Barrel which included jalapeño poppers, pepper jack cheese and spicy ranch.

I cannot give any sort of fair critique on this burger. By the time of the night, I was surrendering but my brother gave it his best attempt and just had a “I’m trying to smile but I’m so full” look on his face. 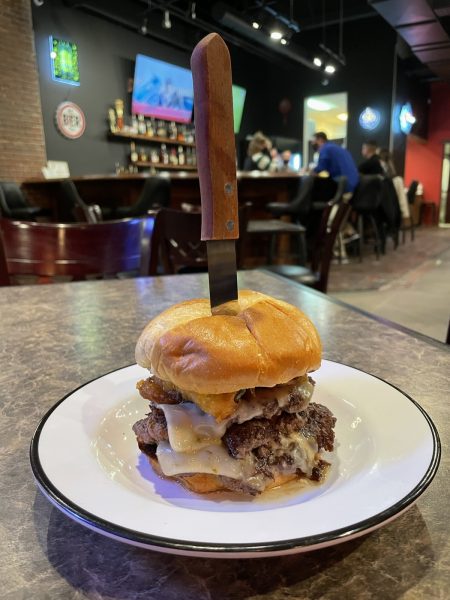 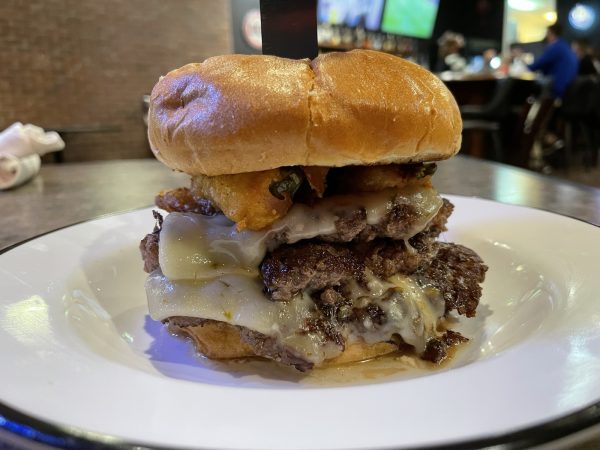 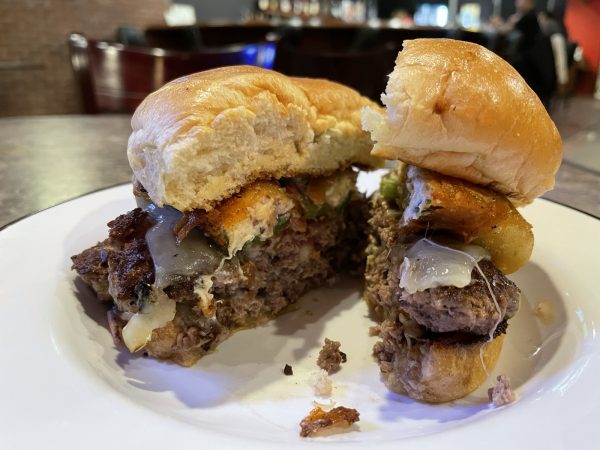 No lie, everything we had was fantastic. I’m sure there might be some people questioning the price and I’ve always said that price doesn’t matter if you really enjoy the food and feel the quality is worth it. With COVID-19, I can’t even imagine how much the price of meat has gone up for restaurants.

Jumbo’s set out to offer some high-quality food at very reasonable prices and I think they nailed it on all accounts. Throw in a fun, hip ambience, it’s a place I’d definitely visit again in a heartbeat. Plus there aren’t too many places in the area that offer the bar type of vibe that Jumbo’s does. It definitely fills a need.

I know the chef had some amazing wings at a past Wingapalooza event, so I’m going to return for those in the near future. But until then, I need to go fall into a food coma. I’m so incredibly stuffed right now.

Mark it down, Jumbo’s Beef & Brew will be one of the top ten best new restaurants of 2020. 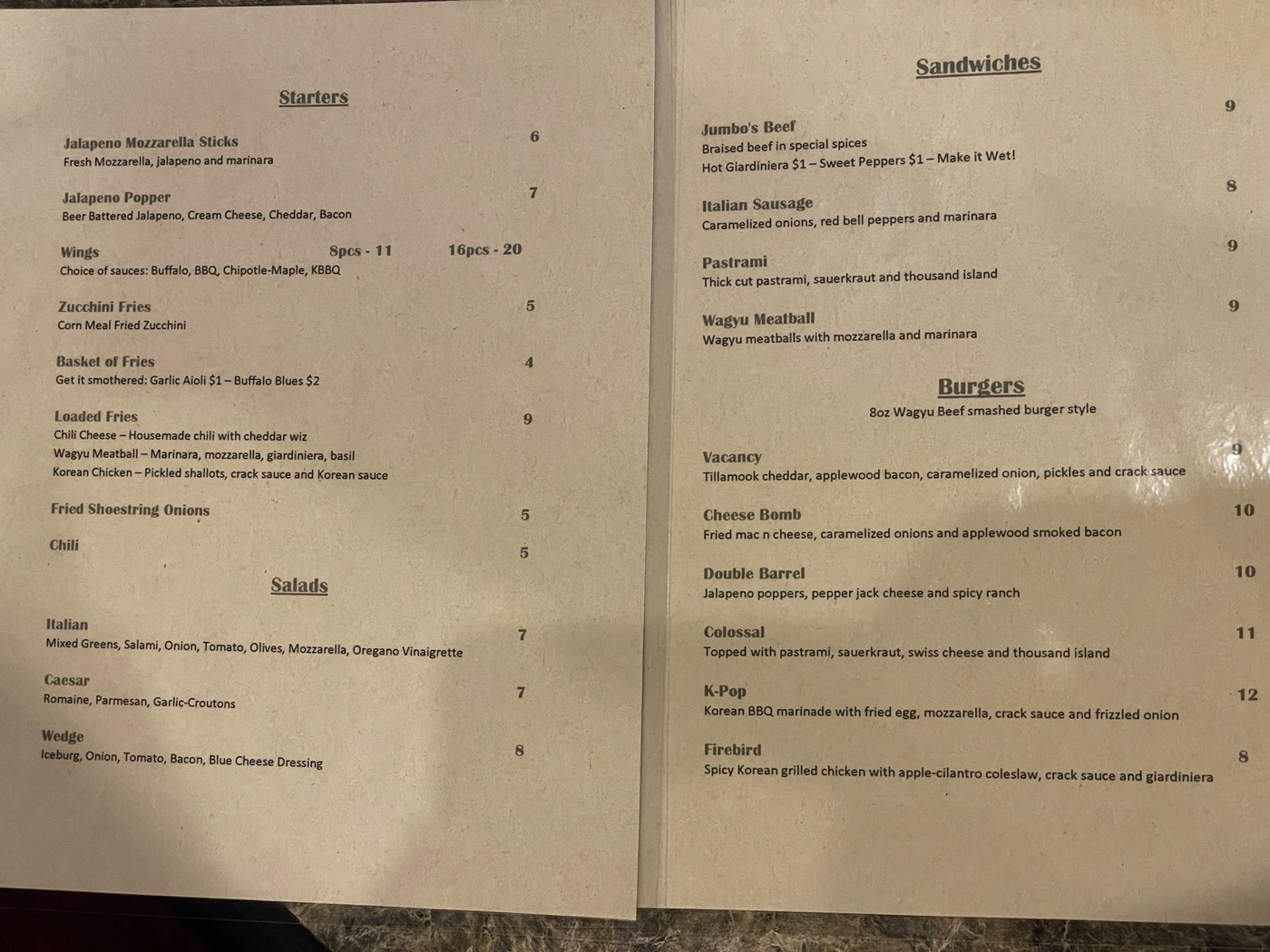