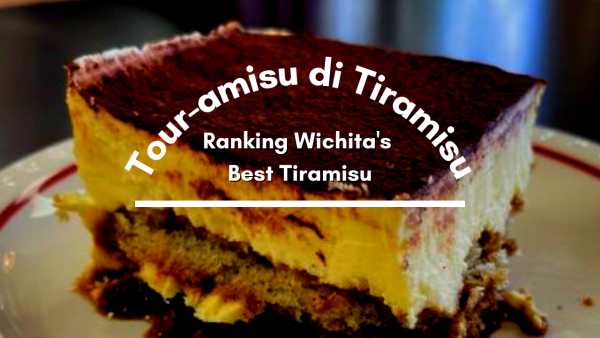 Back in October, I had this crazy idea to go around town and try every single tiramisu I could get my hands on at the various restaurants around town. What’s the best tiramisu in Wichita? I was ready to find out.

When planning out how to do my Tour-amisu di Tiramisu, as I called it, I wanted to do it right. Anytime I put a best of lists out there or complete a tour of certain dishes around town, I have three criteria to follow:

For this particular list, I had 35 different variations of a tiramisu in Wichita. I thought it’d be an easy tour to complete but it ended up being the largest and most expensive blog to date. Every time I thought I had a good list of tiramisu, new ones would pop up. I started to think some restaurants just added tiramisu, so I’d come visit.

With 35 tiramisus, I separated this out to 3 categories.

Some final things to note. This tour was completed by my family. It wasn’t just me. Next, we did not ask restaurants who made theirs in house and who didn’t. To me, I wanted to judge the tiramisu strictly for what it was. The fact that they were made there or elsewhere was irrelevant to me. If I thought it was delicious, it shouldn’t matter. After all, it’s food. If you like it, then all is fantastic. The rankings were totally subjective and made based on taste. What we felt tasted the best, was ranked #1 and so on. Cost played zero part into the rankings either even though the tiramisu ranged from a few dollars all the way up to over $10 and change for a single slice.

So without further ado, let’s get on with the Tour-amisu di Tiramisu: Wichita’s Best Tiramisu.

This was our homemade tiramisu. We thought we should make some at home to get an idea of how hard it is. It was tougher than we thought. Getting the ladyfingers to the proper texture was a tall task we didn’t perfect but need to try again in the future. Obviously, a homemade tiramisu doesn’t belong in officially being ranked so it’s in this category.

Bagatelle Bakery came out with a limited-time peppermint and gingerbread tiramisu. Both were fantastic but so different from traditional tiramisu that we didn’t include them in the ranking.

A local bakery called Komugi Japanese Bakery came out with some matcha tiramisu. It had a very earthy flavor and by far the unique of all the tiramisu we tried.

This limited-time option was a mix of a brownie and tiramisu. It was basically a rich brownie topped with the goodness of a tiramisu. Amazing but again, not fair to compare to traditional tiramisu.

Good heavens, if you love Churn & Burn, you have to try their tiramisu drink. It tastes just like tiramisu and is cold and refreshing.

I stopped by The COOP and Coffee House in Derby, KS and ordered a tiramisu coffee drink on a whim. It had a slight tiramisu flavor but like others, this didn’t compare to real tiramisu.

Who just missed the cut to make the top 15 tiramisu in the Tour-amisu di Tiramisu? Find out in the Part 2 of the blog.