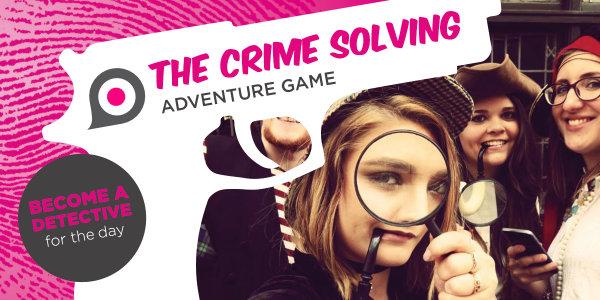 My friends saw an advertised on Facebook for a GPS location-based virtual detective game called CluedUpp. They describe themselves as an exciting, outdoor detective adventure. To participate in their game, it cost around $40, but I did see some Groupons available for the event.

The goal was to grab your friends and roam around downtown Wichita in what was like a real life Clue game. For many groups, it would take anywhere between an hour and a half to three hours. Throughout the process, you could end up walking around 3 miles.

Just like Clue, you’re given many witnesses, suspects and murder weapons. It’s up to you to find who did it and with what weapon. The theme of the whole detective game was Jack The Ripper.

So, what can you expect?

Everything starts with watching a quick video at home that explains the rules of the game and the backstory behind the theme.

CluedUpp took place on the afternoon of Saturday, April 3. That’s when all teams were told to start their hunt for the killer. The meeting point was in a vicinity around the Sedgwick County Courthouse.

Once we arrived, we downloaded the CluedUpp game app which we used throughout the hunt. They said you and your team of six could all download it and use the app to see a map of the game, the rules, a leaderboard to compare you against other teams, and see the witnesses and suspects. Once we were ready to begin our hunt, we hit start which started our timer. 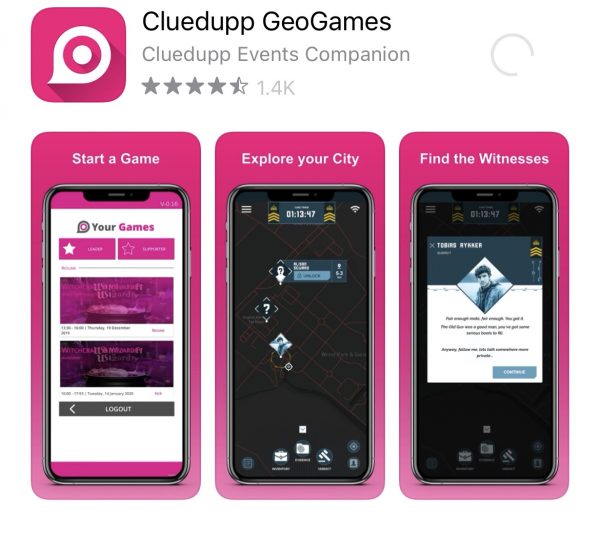 It’s important to note that everything in the game is essentially done virtually. The real life buildings in Wichita don’t matter nor are there any actors. It’s completely virtual. I had no idea. I saw a man with a bucket that everybody seemed to be walking to. This led me to believe he was a witness or suspect in the game….. nope, just a random man with a bucket in his hand.

Using your phone, you would walk to certain areas of downtown. When you reached a designated spot on your map, a pop-up would appear on your phone with a clue, a suspect, a witness, a riddle, something to help you along the game to decipher who the killer was.

We walked all over downtown and were surprised how many people it brought out. There were at least two-hundred people all walking the streets of Wichita. I loved how it got people out and about. 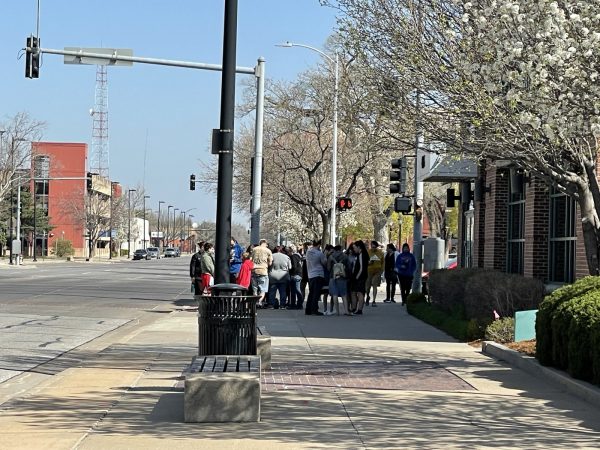 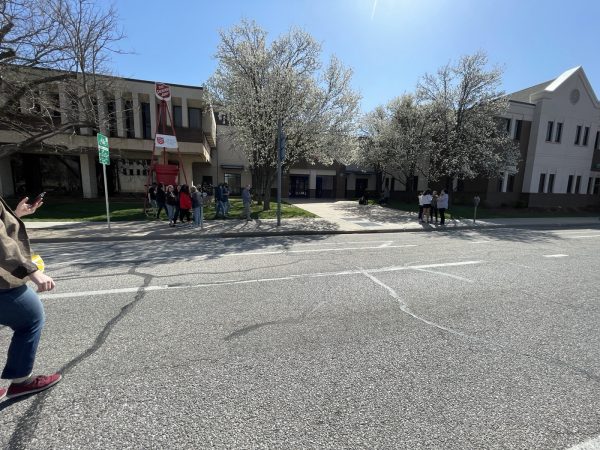 Some teams even dressed up! 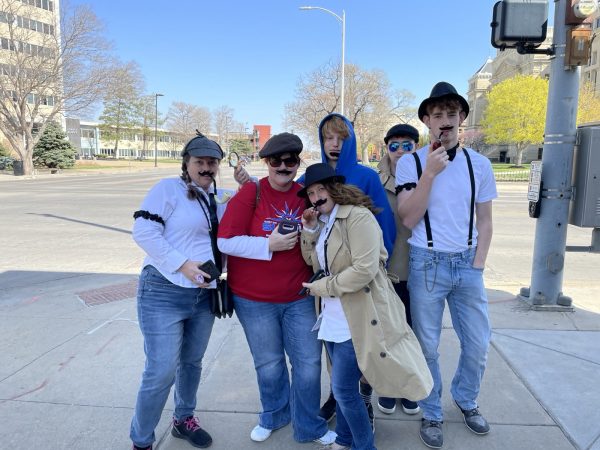 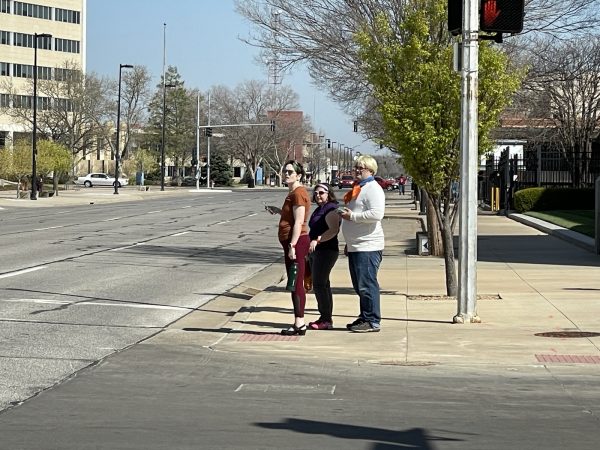 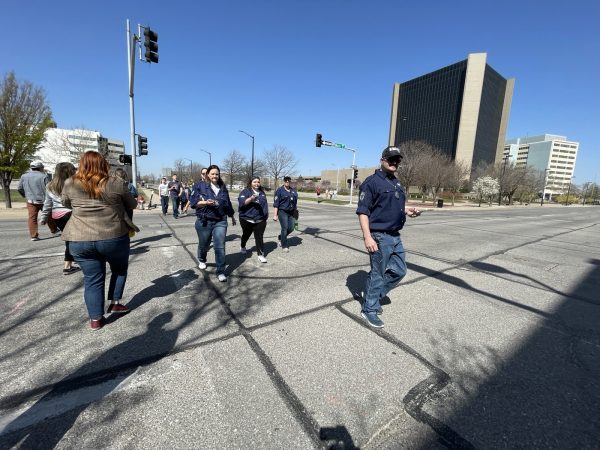 If at any time you needed a break to grab lunch, a drink at Norton’s like we did, or use the bathroom, you could pause the game which essentially disabled everything to give you a break.

As a sidenote, you’ll want to bring a portable phone charger. Using the GPS on your phone throughout the game was a big drain on our phones.

My team eventually solved the puzzle and I asked them to share some thoughts on the CluedUpp adventure game and here’s what they all said:

For me, I’m not a big fan of reading and there was a lot of it to do on the app, luckily I had a team of people who were excellent readers and retainers of information. I was there to help answer riddles, take pictures, and look at the map.

It took our team roughly three hours to complete, but there was an hour and twenty minute stop at Norton’s to grab lunch and drinks.

The leaderboard showed the top 25 teams and needless to say we weren’t in there! 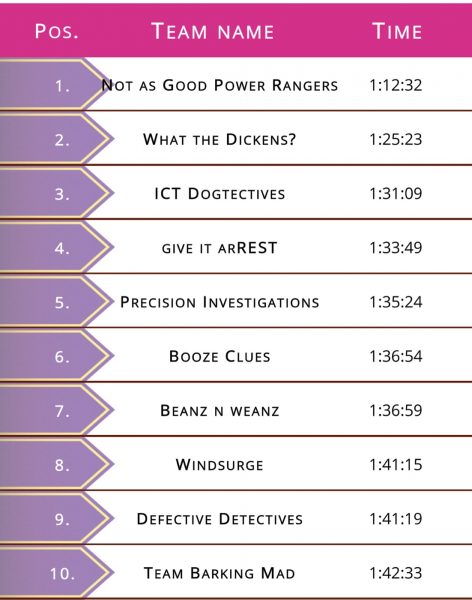 The consensus was that it was fun. The virtual GPS game gave us and so many other people a reason to get out of the house and just walk around Wichita.

For me, the favorite part was seeing people out and about. It was such a nice sight to see.

I’ve seen other location-based virtual detective games and scavenger hunts before and this was my first time participating one. Next up, I want to try one of the scavenger hunt ones.