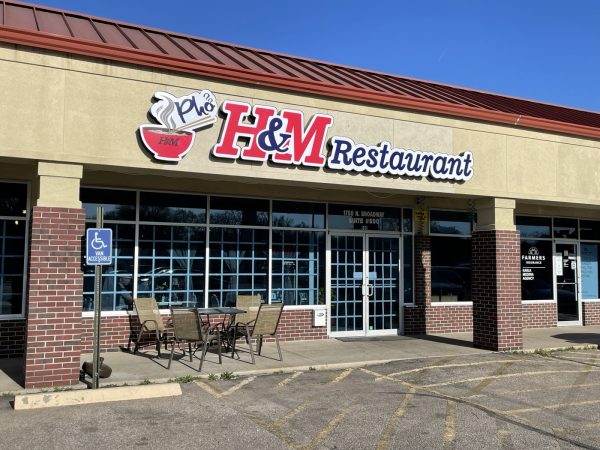 What was once known as Pho Hien is now Pho H&M Restaurant. The restaurant that has been one of Wichita’s longest running Vietnamese restaurants had new owners take over in 2020. The restaurant located at 1750 N Broadway has been given a new facelift and more importantly a new menu. The original Pho Hien was pretty limited in terms of Vietnamese cuisine and now under new ownership, they went aggressive in hoping to show Wichita that Vietnamese cuisine goes beyond pho. Here’s our first look at Pho H&M Restaurant.

With a brand-new menu, I dropped by with my extended family to try as much of the menu we could even though we all just literally finished eating a few hours before. Bloggers have to blog regardless of appetites and blogger’s family members are on call 24/7.

Our appetizers spanned an assortment of items. We had HUGE fried shrimp, fried calamari, eggrolls, and oysters. Everyone found something different they liked. Megan was a big fan of the fried shrimp; she’s never had it served like that before. There was a seasoning on the shrimp that really kicked up the flavor which she enjoyed. My daughter was loving every second of the eggrolls. I feel like we are starting to make some headway on getting her to try different foods, so it was a big deal for me when I saw her grabbing them with no hesitation.

I was particularly fond of the fried calamari. Everyone tried the oysters. While I liked them, my 10-year-old niece had the most dramatic response to her first-ever oyster. I get it, oysters aren’t for everyone. For the ones that do eat them, they had a great time with it. 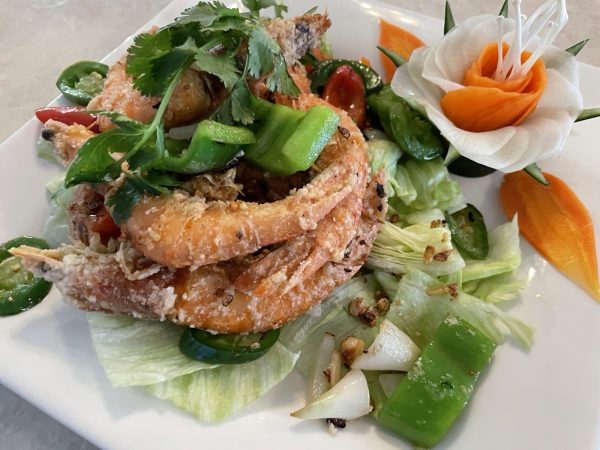 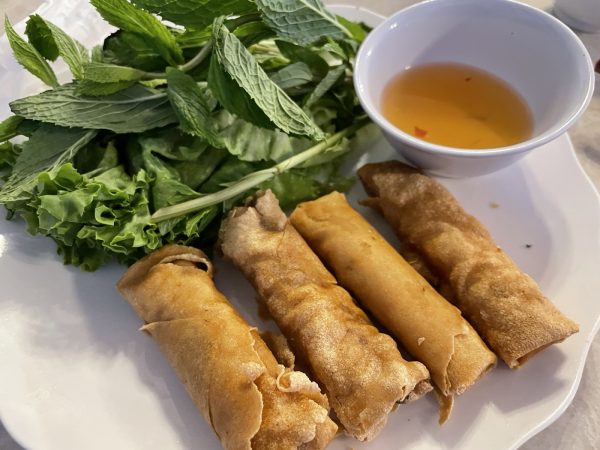 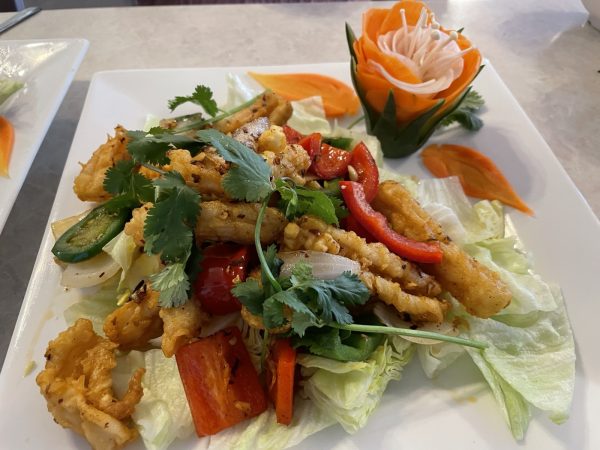 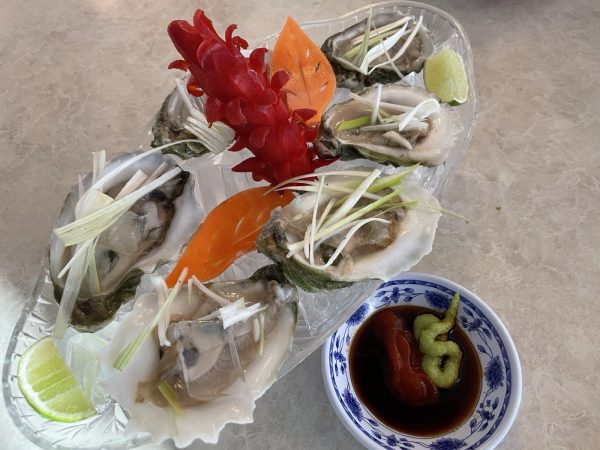 Before the rest of our dinners arrived, we also split a sizzling plate of cube beef and peppers. The dish came out literally sizzling like some fajitas. The beef was soaked in a mix of soy sauce and hoisin to give it a sweet yet salty appeal that tickled everybody’s taste buds. This was possibly the highlight of many people in my group. 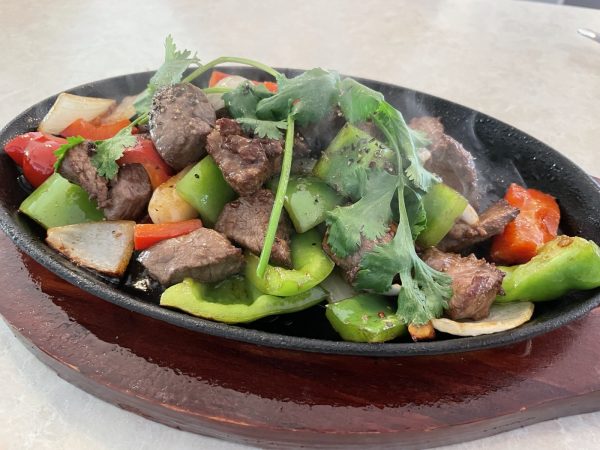 Somehow, some way, we made room for dinner. Everyone had a mix of bun, pho and frog legs. Most of the adults went with the bun dishes. It was probably one of the biggest portion sizes we’ve seen served at a Vietnamese restaurant. The picture doesn’t do it justice. It was a very generous dish filled with all the makings of a great bun. I heard no complaints from my family. All the kids went with pho. Unfortunately, I didn’t get a chance to try it, so I’ll have to return to report back on that. 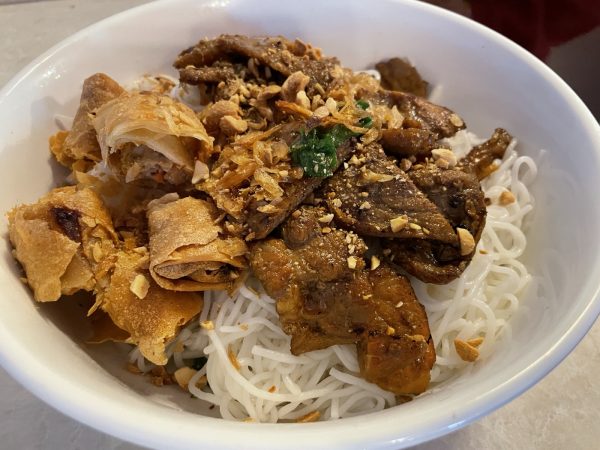 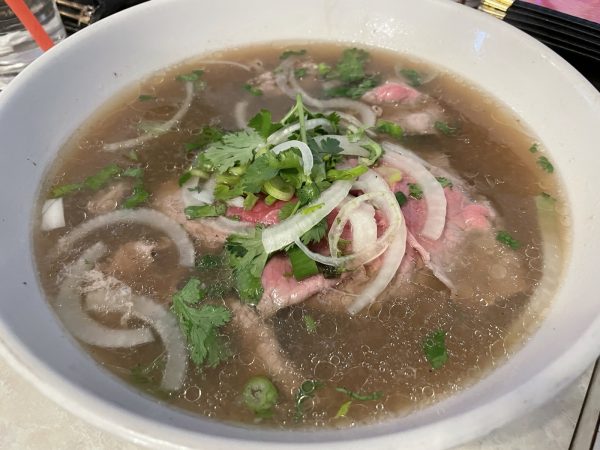 I went with the stir-fried Thai chili frog legs. There was a nice sweet heat to it that took the dish up a notch. I’ve never had frog legs at a Vietnamese restaurant before and might have to get more people to hop on this trend. The frog legs were like drumsticks with tons of meat. I absolutely adored the Thai chili flavoring. 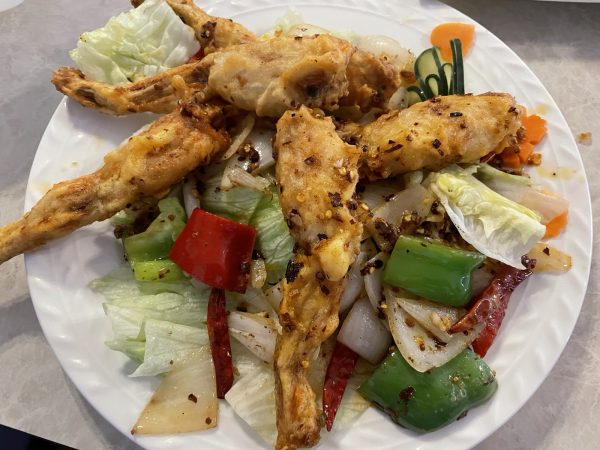 At a 200+ menu item, the head chef went big. I know they wanted to bring some inventive and creative dishes that aren’t often found at local Vietnamese restaurants. I’ll be paying attention to see if they scale it back a little or if diners love what they see. There was a big crowd in when we went, so it appeared others were excited as well.

This one is definitely worth checking out. I do intend to return soon solely for hot pot, so a revisited review may take place sooner than later. 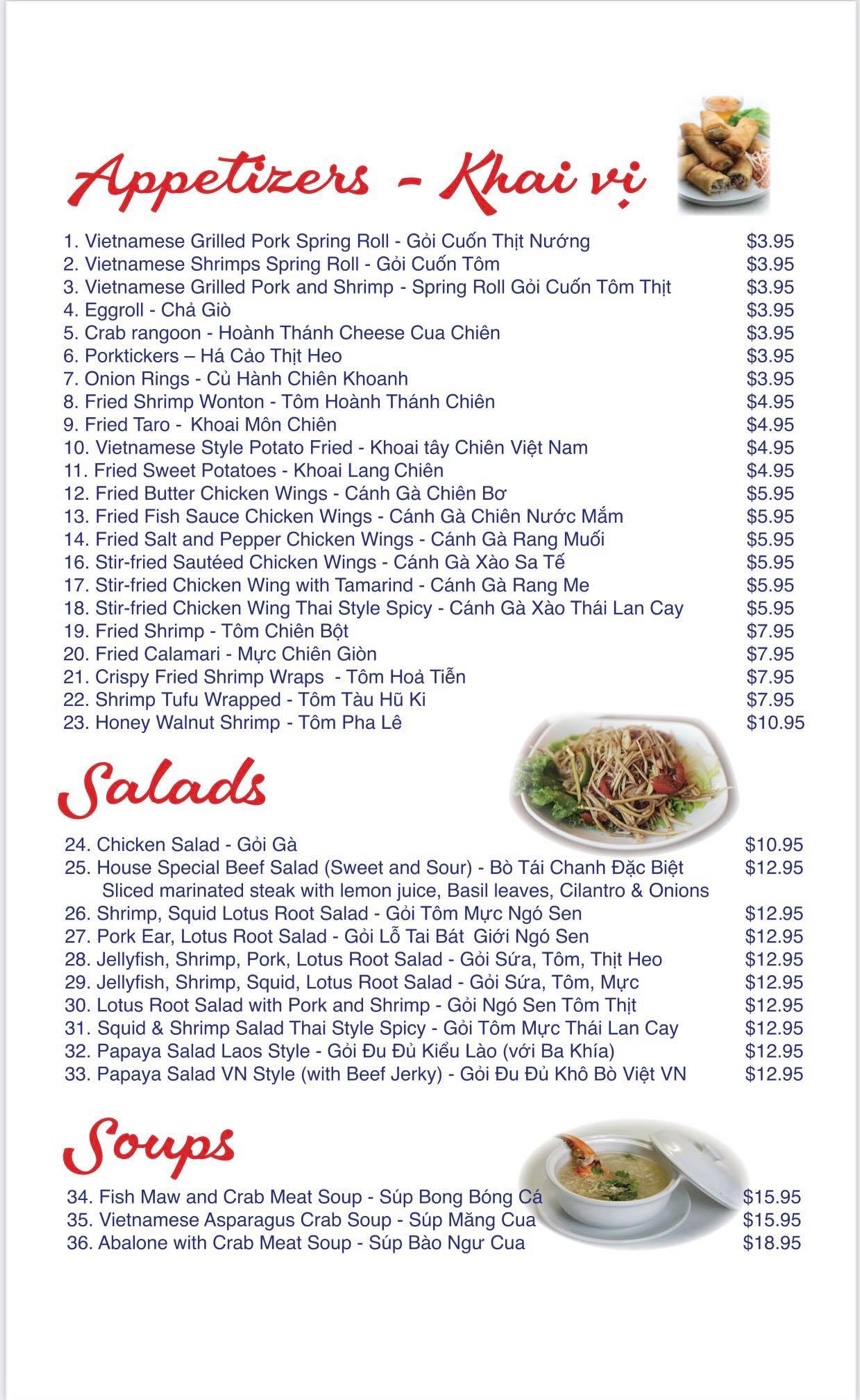 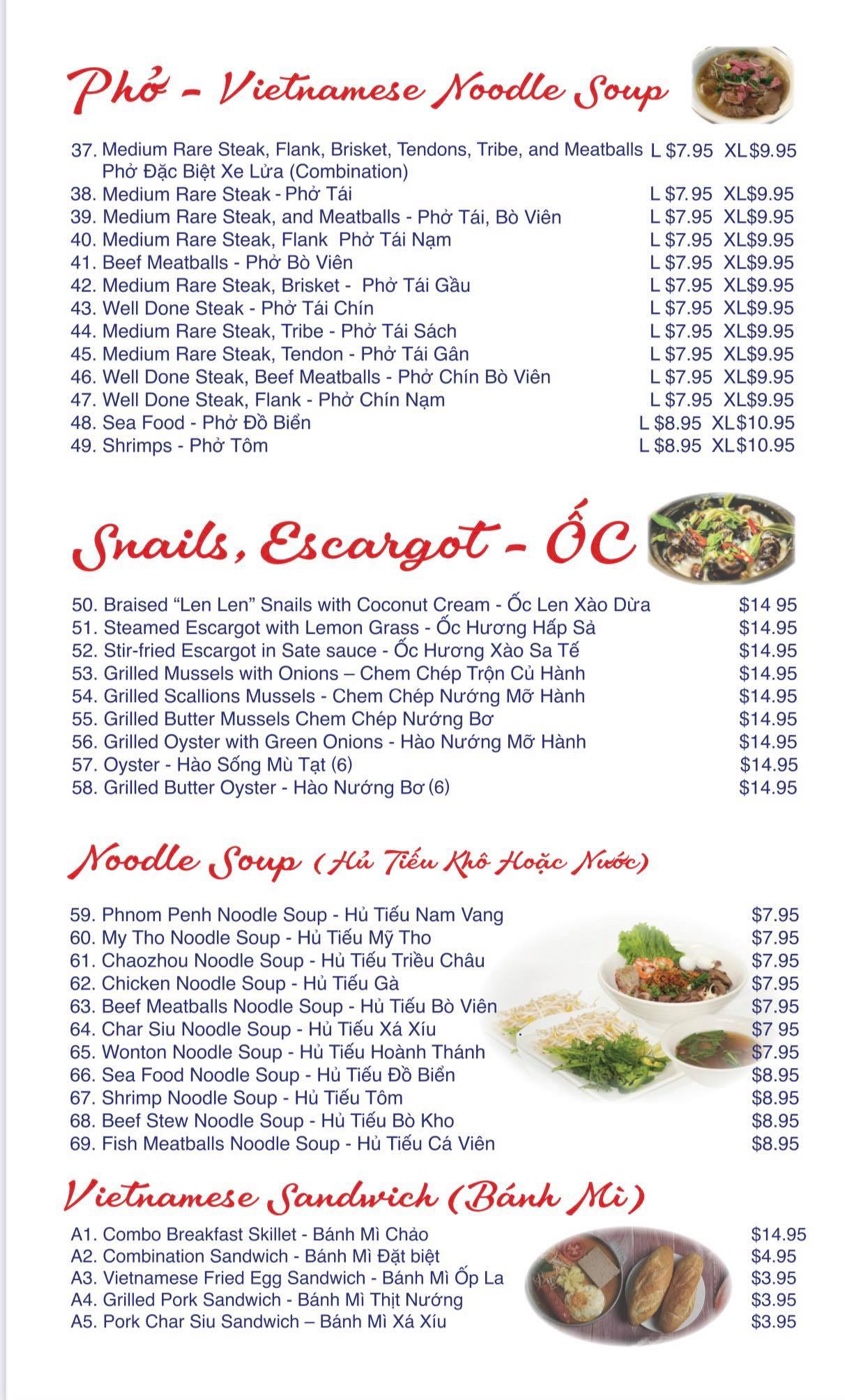 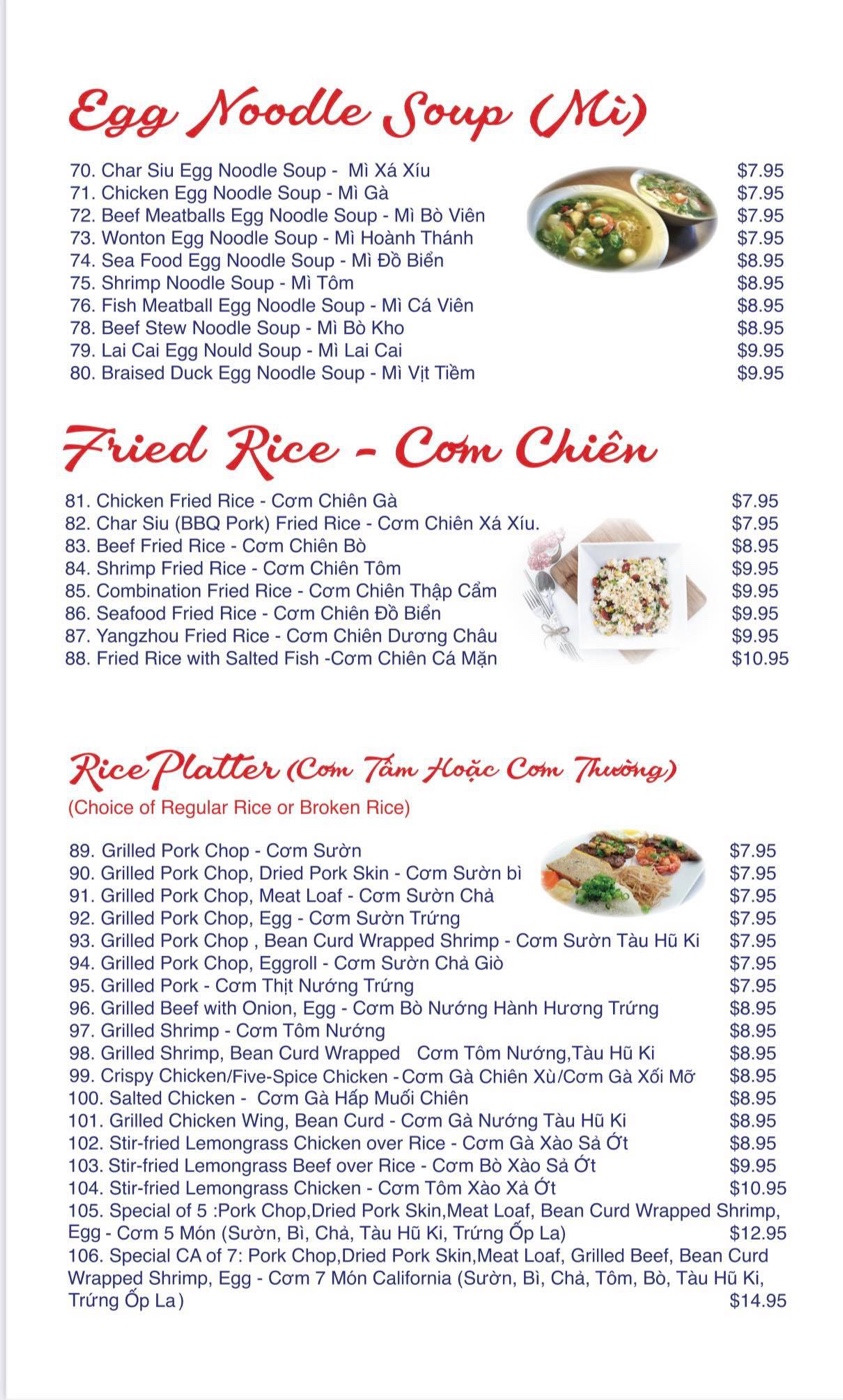 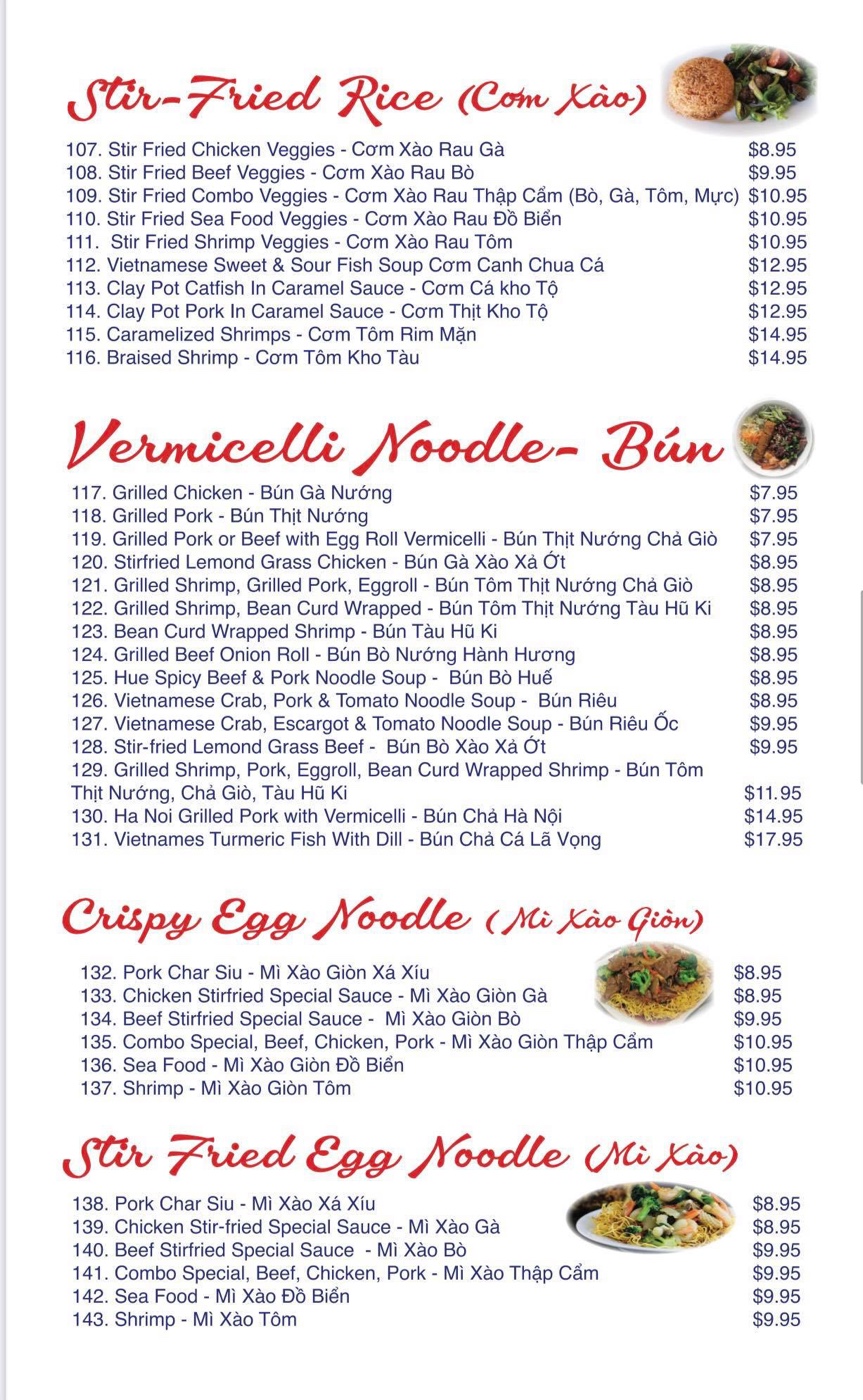 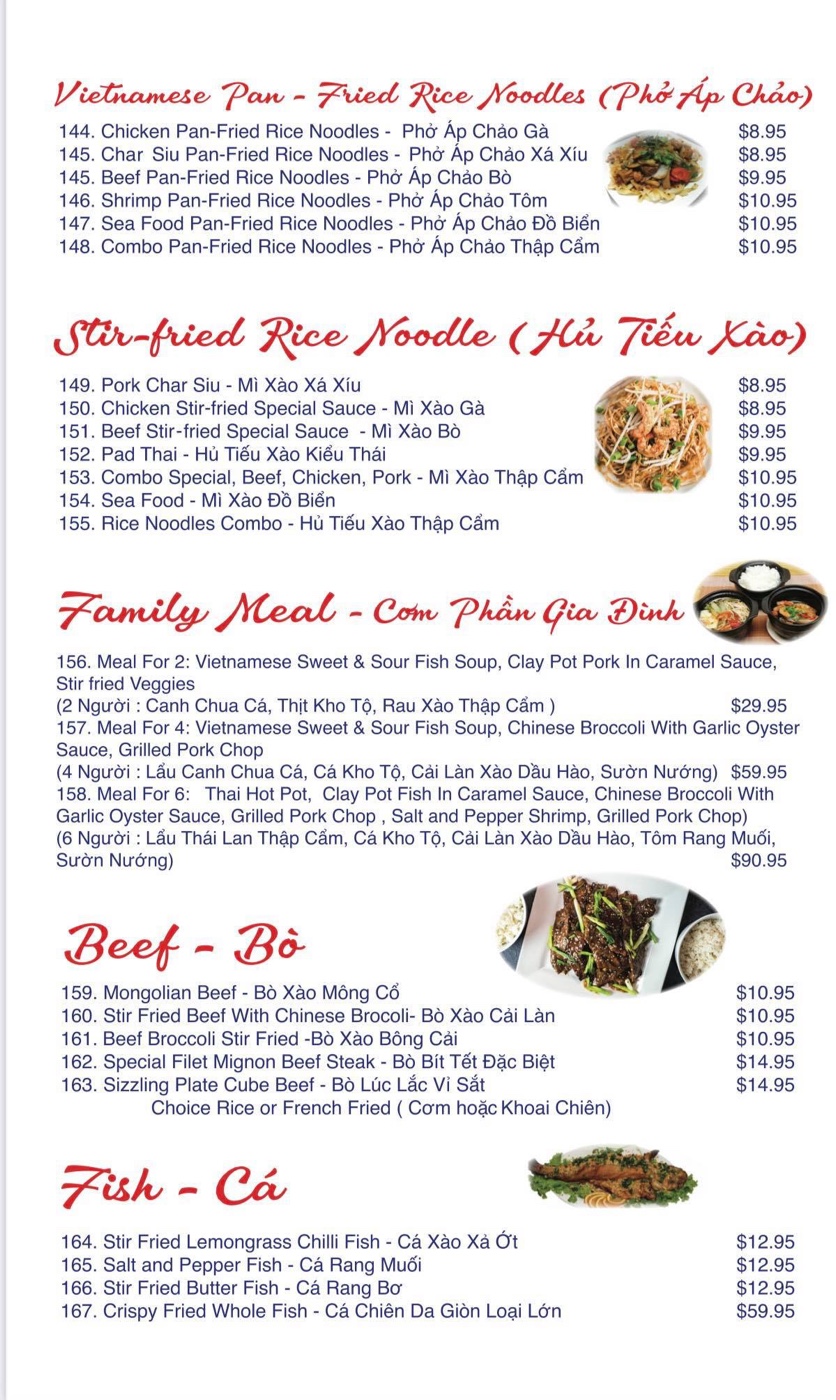 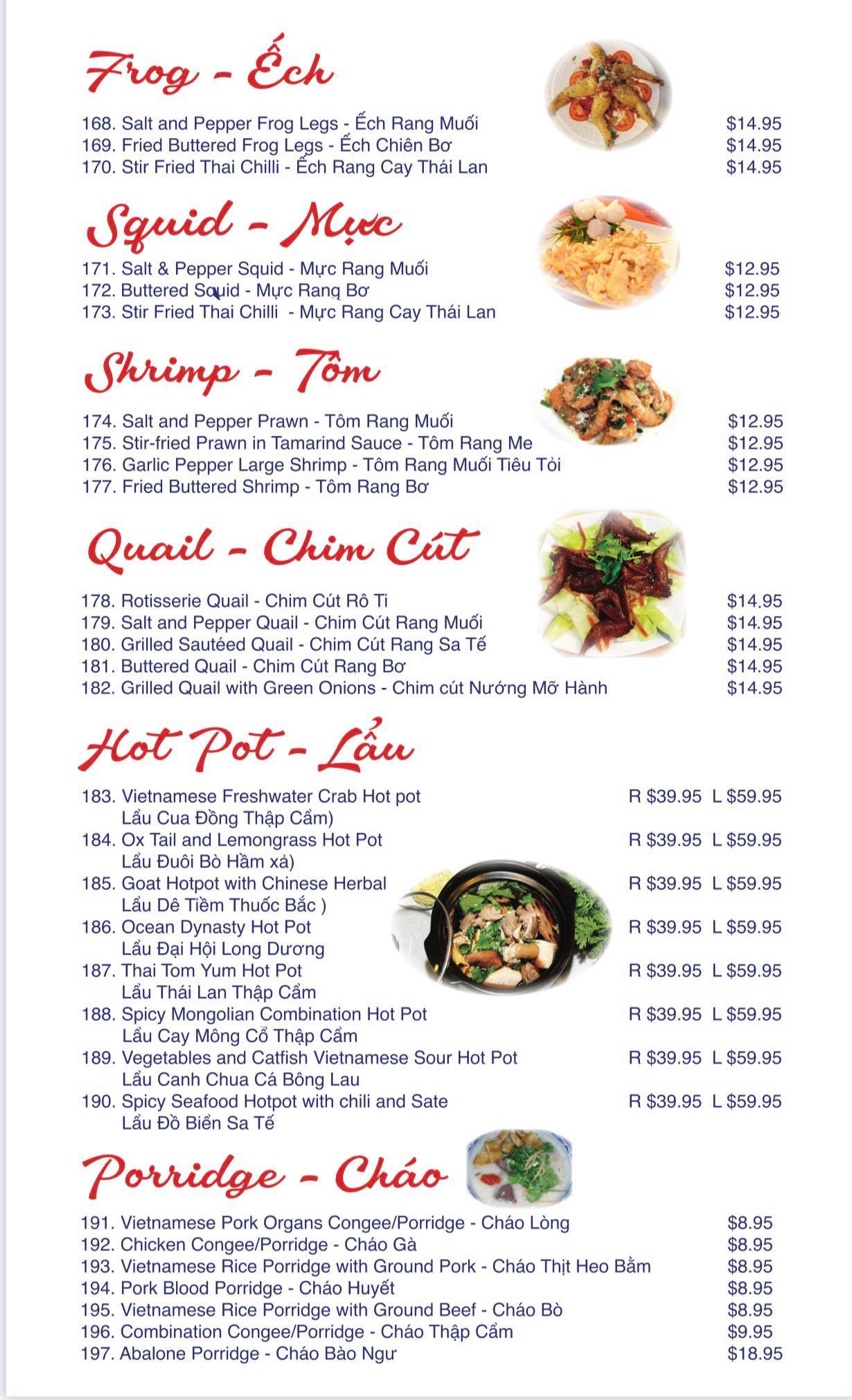 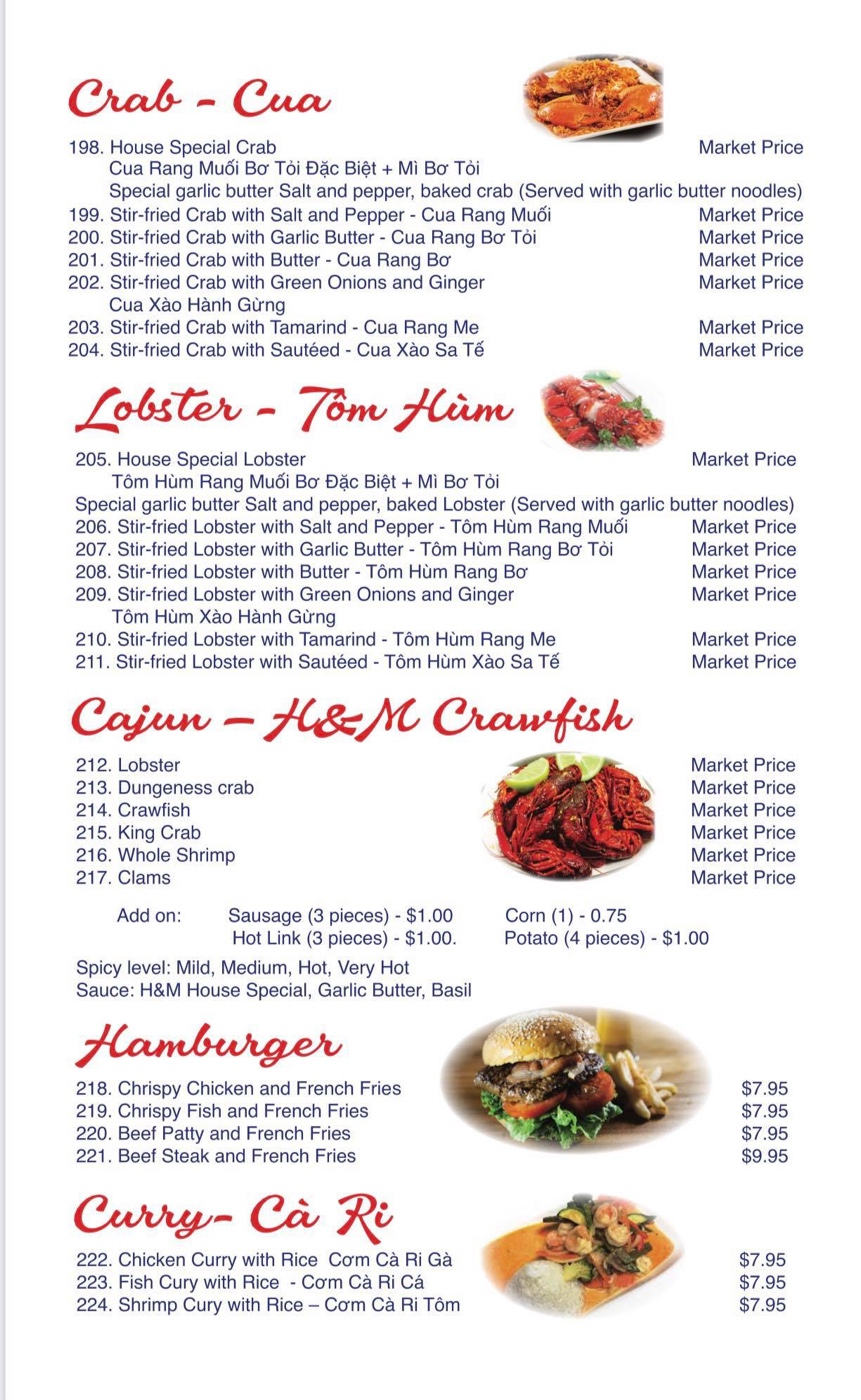 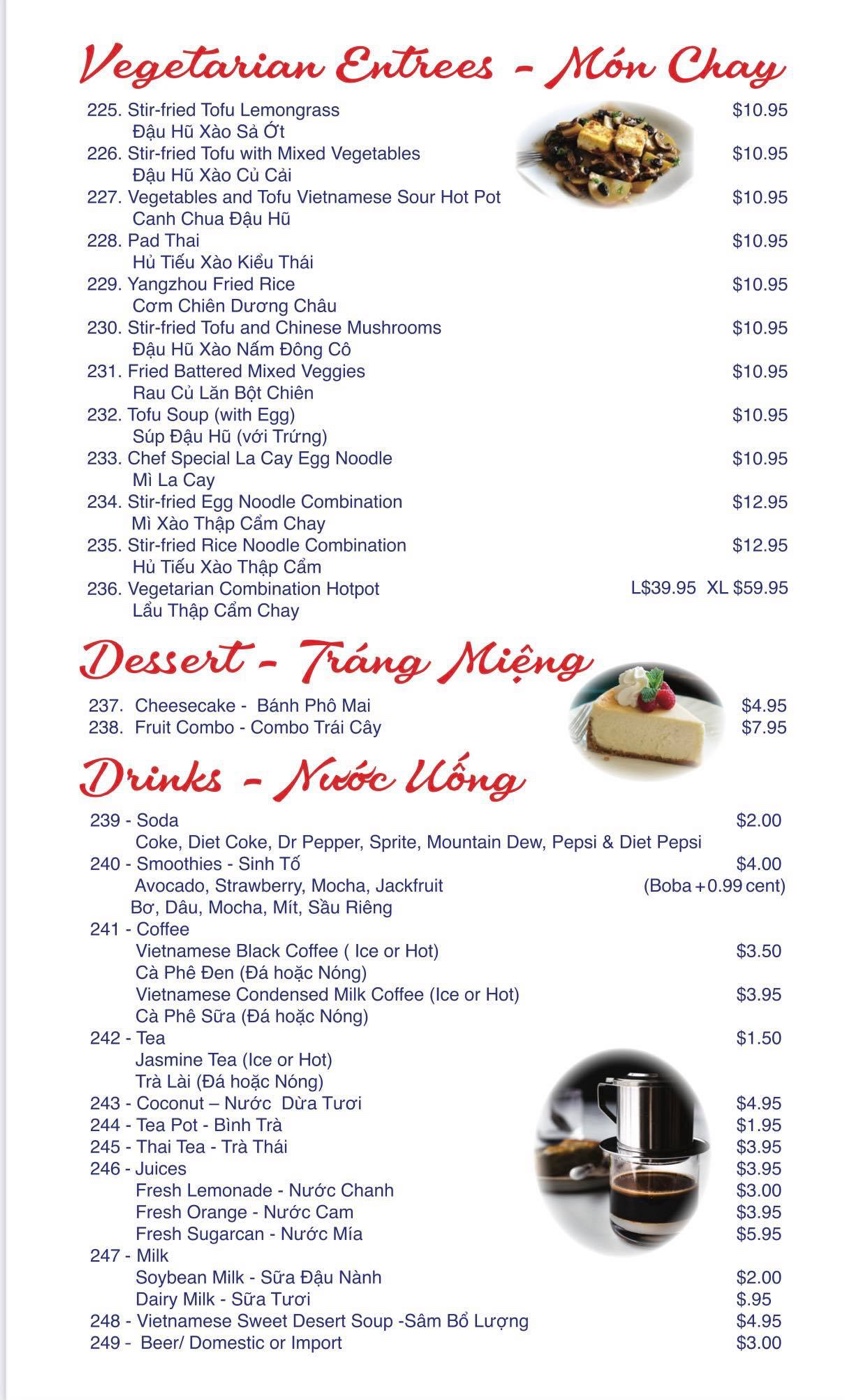