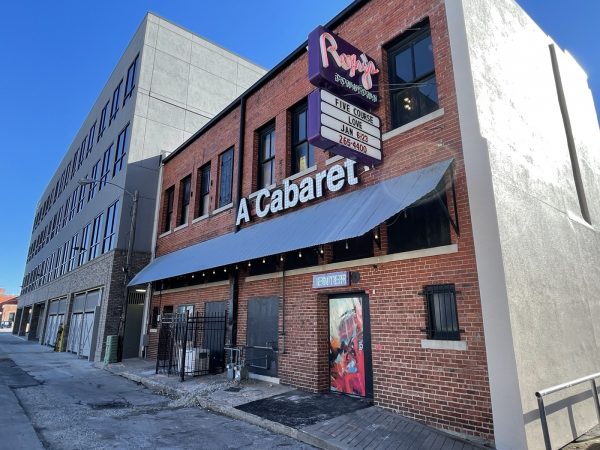 One thing I wish I got out to do more was enjoying our local performing arts scene. I grew up watching musicals and aspired to be an actor. My career was quite abysmal to say the least. There was the time in second grade I threw up on stage and my father had to come get me. I should have quit then but, tried again in high school where I was in a few high school shows with a total of two lines. Acting wasn’t something I was cut out for, but I still enjoyed watching others with real talent.

This month, I had the opportunity to make it out to Roxy’s Downtown located at 412 E Douglas. Roxy’s is a live performance venue located in the former Cabaret OldTown space. They have comedic, musical shows in a cabaret style theater complete with a full kitchen in-house and bar. Their story, which you can read here, is quite incredible.

Here’s an idea of what to expect from my most recent visit.

While they have a Douglas address, parking at Roxy’s is found behind the building at the north end, where you’ll also find the entrance. Once inside, you’ll see the ticket office and then a flight of stairs that takes you to the theatre. As you walk up the stairs, you’ll see many past show posters lining the walls, which was cool to look at. 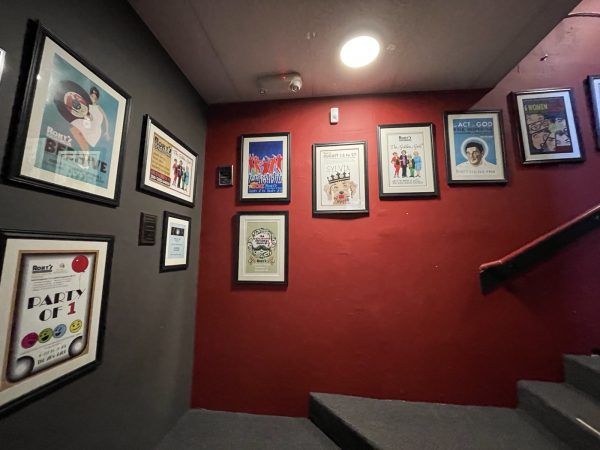 You’ll be greeted by an usher, who will then show you to your seats. 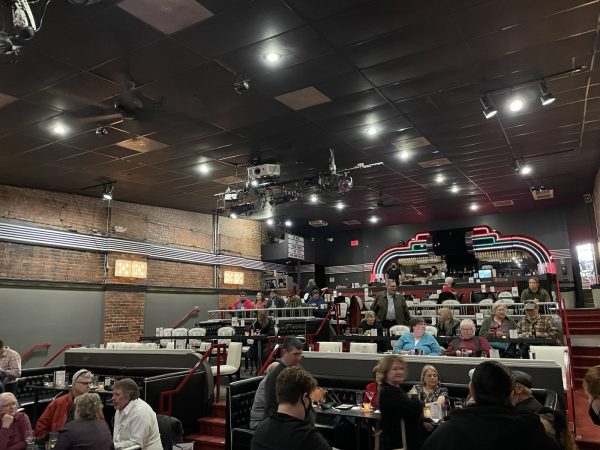 The theatre seats 152 people and hosts shows year round. All the tables are either 2 or 4-tops or you can sit along the railing which seat six people or a booth for five.

Their website has all their show dates and is where to buy your tickets and select where you want to sit. 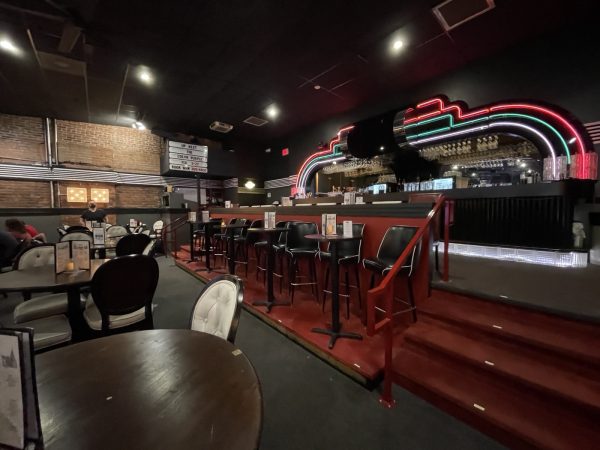 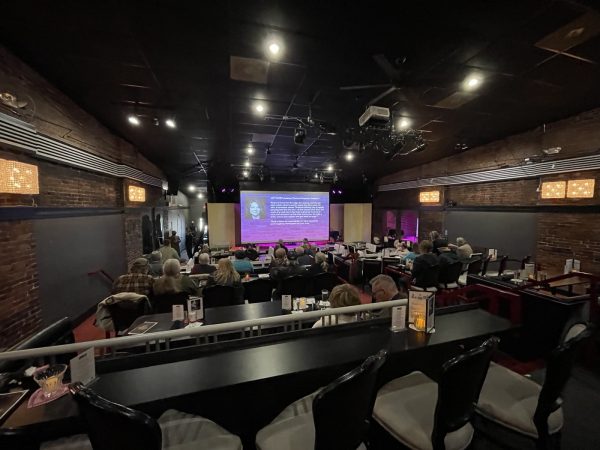 I was there to see “Five Course Love” which made perfect sense for someone who loves to write about food. The description for the show was as follows:

The Associated Press called this musical comedy “artfully silly and genuinely funny….hilarious and imaginative.” Three actors play fifteen different characters in five different restaurants on the hunt for one true love. The evening begins at Dean’s Old-Fashioned All-American Down-Home Bar-B-Que Texas Eats, where a blind date goes charbroiled wrong. Next, at the Trattoria Pericolo, a mob wife has a secret rendezvous behind her husband’s back. At Der Schlupfwinkel Speiseplatz, a waiter, a dominatrix and her kept man discover at the same hilarious moment that they are all dating each other. In Ernesto’s Cantina, a hill bandit and his rival battle for the hand of the beautiful Rosalinda. And at the Star-Lite Diner, a waitress pines for her true love and gets a little help from Cupid in making her dreams come true.

There was also a five-course meal option that was created to pair with the theme of the show, along with cocktail pairings for each dish. 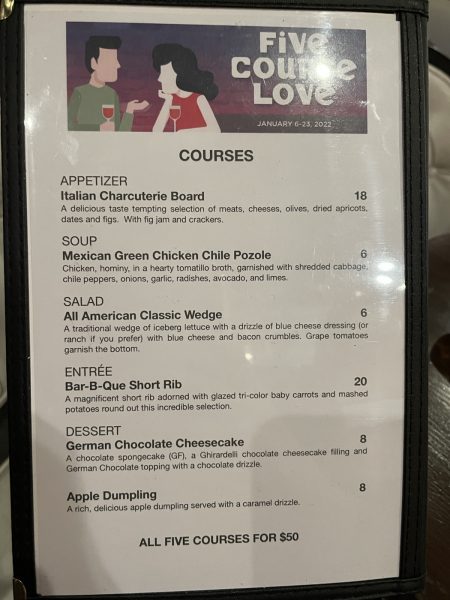 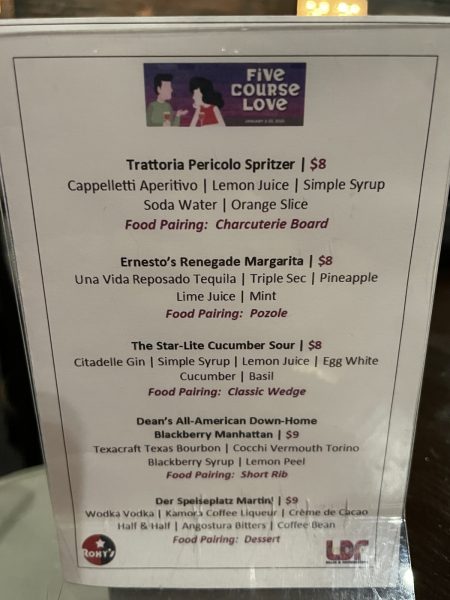 Here’s a look at each of the five dishes. Most of them were brought to me before the show started except for the main entree which came out during the show and the dessert at intermission.

My favorite of the five courses was the Mexican Green Chicken Chile Pozole. It’s hard for me to not love anything green chicken chile. Theirs was fantastic, hearty and incredibly flavorful. You really can’t go wrong with anything here. One things for certain, I was stuffed before the show ended but sat back and enjoyed the second half once my dessert was entirely in my belly.

As for the show itself? The cast and entire staff did a phenomenal job. Given my absolutely abysmal acting career, I shouldn’t be in the business of reviewing anybody. But for what it’s worth, the first half was good and set the mood. They did a great job of setting the story and getting people warmed up as the second half really took it to another level. I don’t know if that was deliberately, but the songs and storytelling post-intermission were delightful. I found myself nodding my head to some music and laughing out loud at times. The three-person cast of Ethan Crank, Jenni Warren, and Andrew Walker truly knocked it out of the park. They were fun to watch and Walker provided so much comedic relief. There were so many times he didn’t even have to say a word on stage to get a chuckle or laugh out of me. All three of them, though, were true stars playing various characters with various accents. I was envious of their talents and ability to avoid throwing up on stage unlike second grade me. 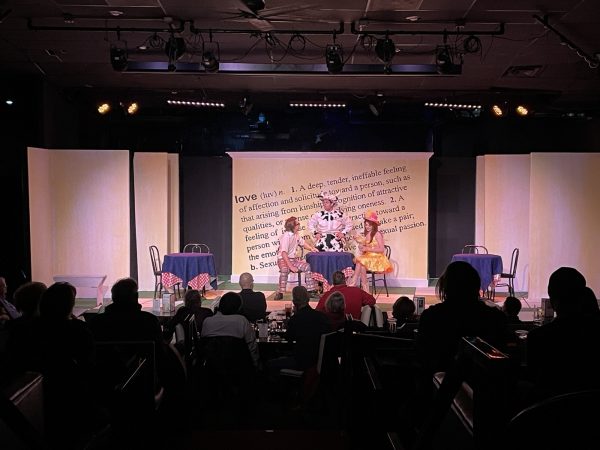 Kudos to the servers who probably logged lots of steps taking care of the guests. They too did an excellent job.

The whole experience at Roxy’s made me miss live theatre so much. I hope to make it out to more shows, not just there, but many of the other venues around town.

For more on Roxy’s, visit their Facebook page.  Or better yet, head to their website, grab some family and friends and catch a show.