The Wichita Wagonmasters Downtown Chili Cook-Off had their 33rd running of the event yesterday.

They drew a record crowd and I believe even ran out of tasting kits. Amid the rain, people still came and stood in line waiting to try some of the best chili Wichita has to offer.

In the end it was Meritrust Credit Union who was the Grand Champion.

The full results were posted on their Facebook page:

Chili Cook-Off’s are one of my favorite food events. I’ve been hosting a chili cook-off with my friends for a decade and even have one at work. Besides Pho, there’s no better Fall food than Chili. I simply love it. 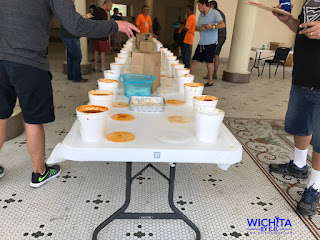 This year I was able to once again be a judge at the Wichita Wagonmasters Downtown Chili Cook-Off.

The Wichita Wagonmasters do a tremendous job of putting on this event. From everything you see out in the crowds to all the behind the scenes work, there’s so much to do in pulling this off. Organization has to be key and they do it well. For the general public it’s only $5 to enter to try all the chili’s you can before it’s gone. Trust me, you will get your fill!

There are so many categories to judge whether it’s ICS Red, Anything Goes, Salsa, ICS Green, Charity Chili, etc. I opted to help judge the Anything Goes competition. What I love about that category is literally anything goes. You have chili’s from all across the spectrum; some soupy, some that are like goulash, thick chili, corn chili, green chili, red chili; it’s literally anything. To quote Forrest Gump, it’s like a box of chocolates, you never know what you’re gonna get. 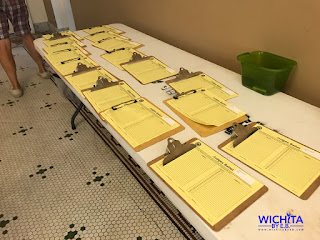 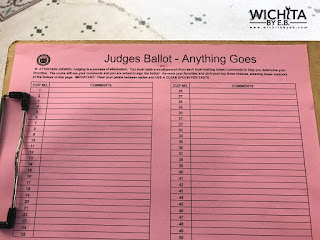 We were put up in a big open room at the Eaton Place where they had tables, palate cleansers like pita bread and chips along with plenty of beverages to go around. 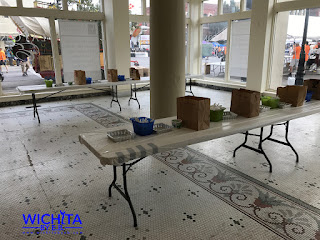 In the Anything Goes competition, there were over 35 different chili’s to try. It was a daunting and challenging task but my stomach was up to it. It’s had years of training to lead me up to this point.

We were given one hour to try all 35+ submitted chili’s. The rules were simple. There were boxes of spoons and you were to try a spoonful of chili, take notes and move on to the next one. At any time you could try any chili multiple times. No double dipping of course. At the end, you listed your three favorites. Sound simple? It was especially if you love chili.

Through every single one we tried, there were some really good ones and as expected some really bad ones. Some were burnt so bad while others had such great flavor it was hard to narrow the choices down. If you have a rough time with spicy foods, it can be a bit tough. One of my friends was sweating hurricanes from his forehead after we were done.

Each chili was given a random number so nobody knew who had which entry.

Once we finished, we gave our chili ballots to the guy in charge. At the end of the day, you could find out what chili was what number but my friends and I never did make it back. I remember voting #17 as my favorite chili. It was hands down the best in my opinion and unfortunately I should have went back to see who made it.

My friends and I had so much fun doing it that after much discussion we decided that next year, we will be entering the Wichita Wagonmasters Downtown Chili Cook-Off ourselves and will journal the entire experience. We’ve done it as judges but to do it as competitors would be something totally different and unique. We walked around and spoke to many of the booths to see what all it took to enter and it sounds very doable. We were excited just talking about it and now have a year to plan what we will do to hopefully become the 2017 Grand Champion!

Stay tuned for August of next year!

Checking out the Riverfront Stadium debut with some Shockers baseball

What to expect at Field Station: Dinosaurs – The dinosaur adventure park in Derby, KS